Auer is St. Louis local to the core. She grew up in the Gateway City and has established strong roots — between her family ties, commitment to community and her work with a development firm that has played a major role in urban revitalization.

“I was born and raised in St. Louis; my dad was a state representative and my mom was involved with a housing group,” says Auer of her formative years. “They instilled that value of serving the community. I figured out early on that I was good at arguing my point.” 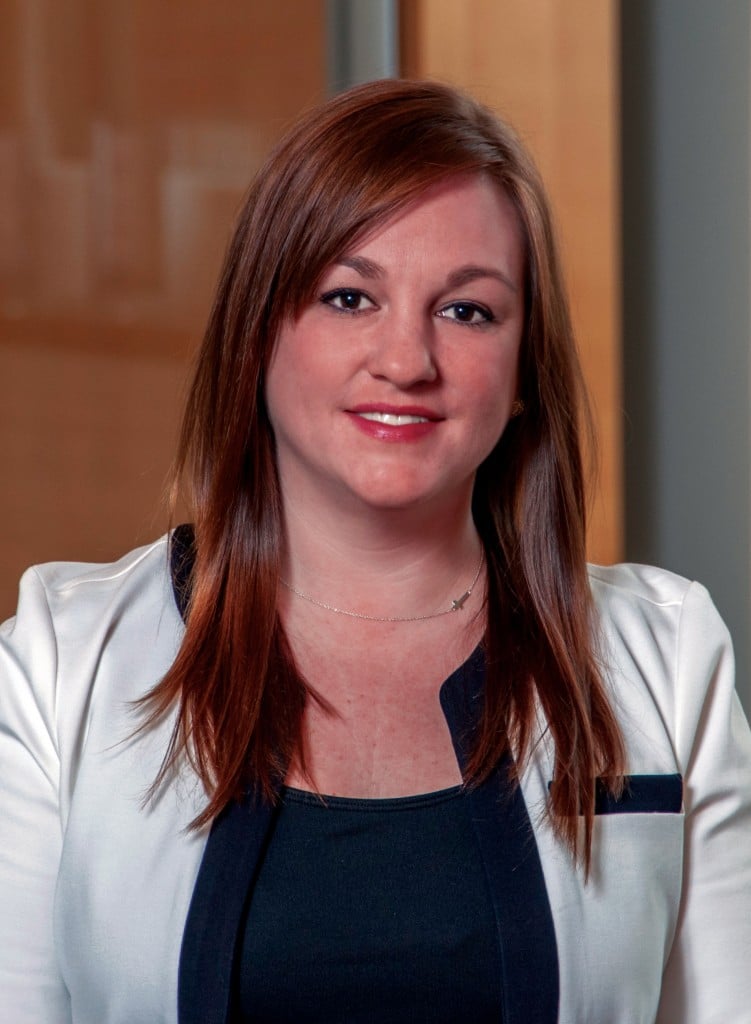 Auer earned her undergraduate degree at University of Missouri in marketing and throughout her studies, hadn’t considered law as a career — though she did take some undergraduate law courses and enjoyed them. “I realized I could listen to certain topics, like bankruptcy law, for hours,” she recounts. “I graduated with my marketing degree in 2003 and immediately qualified for and enrolled in a night law degree program at Saint Louis University where I focused on urban development.”

Before beginning her tenure at Lawrence Group, Auer interned with a local law firm and was hired at Spencer Fane, where working alongside her first mentor, Tim Wolf, she gained significant knowledge and experience in historic tax credits in the practice of revitalizing historic city buildings. She then worked in-house for a smaller scale developer for five years before signing on with Lawrence Group in 2011.

At the time of her hire, Lawrence Group was seeking a paralegal. Auer opened up a conversation and touted the benefits of having in-house legal expertise. Her offer was appealing and she began working under Steve Smith, a founding principal and CEO of Lawrence Group.

Lawrence Group is the only architectural firm serving St. Louis that delivers a full product from start to finish — design through completed construction, including development services. Auer appreciates the variety in her work and the ability to be involved with a project throughout the entire process. “I get a great sense of satisfaction to work with a strong and dedicated team,” she explains. “As a company, Lawrence Group prioritizes the building of relationships both within the company and with the community. I know I wouldn’t necessarily experience that in a firm environment.”

Being in-house comes with challenges too. Auer notes that due to the complexity of the financing or corporate structure of the various transactions, she finds herself weighing the pros and cons of utilizing outside counsel whether it is due to a specialized area of law or due to time restraints. “I want to serve in my capacity as in-house by reducing legal fees, but I also know that I’m not an expert in all areas of law,” she explains.

Being in-house comes with its benefits too. “In-house, you are always looking at how to apply the law to best benefit the project or how to be more creative in the application of the law,” she explains. “That is not to say that in-house counsel strives to get around the law, but it is engaging to actually have the time to explore how it may apply differently depending upon what the project is.”

Whether working on financing a project, exploring site restrictions, confirming tax structures or any of the other myriad responsibilities Auer takes on, every day is filled with variety. “It makes the day interesting,” she notes. “We have a smaller staff that is called upon to do more tasks that a firm lawyer wouldn’t necessarily be allowed to do, like going to a job site to take pictures or doing research or even filing. I love the variety: at any time of the day, I may be behind a desk, in the conference room looking at plan proposals or out at a prospective or active job site.”

Auer has had the honor of contributing to a broad scope of projects in her time with Lawrence Group, each with its own challenges and rewards. “I love experiencing the full project and not having to sit behind a desk all day,” she says. “I also love that I am connecting not only with fellow team members, but also the community and doing something that brings an increased quality of life to people in St. Louis.”

Current work includes a $104 million development project at the Federal Mogul Century Foundry site in St. Louis’ Midtown area. The 9.7-acre site will be adapted for mixed-use development and the future property will include a food market, office and retail space and residential apartments. A few blocks north of the Federal Mogul site is a for-sale townhome project for which Auer is not only providing legal support, but is also the lead development project manager.

Another project, 634 North Grand, involves the revitalization of the Missouri Theater building. The new project is currently seeking the final piece of construction financing. At $53 million, the historic site will be home to a luxury hotel and the new corporate headquarters of Bull Moose Industries.

In 2015, Lawrence Group earned national recognition from Building Design + Construction, accepting a Silver Reconstruction Award for the revitalization of Sun Theater, originally built in the early 1900s, in conjunction with Grand Center Arts Academy, a charter school focused on the performing arts. “I take a great deal of pride in seeing this project through from initial concept, financing, design, rehab, construction and turning the keys over to a great partner,” says Auer.

These projects and others represent Lawrence Group’s ongoing dedication to the city of St. Louis and creating lasting partnerships. “Our commitment to St. Louis includes revitalizing historic buildings and neighborhoods,” Auer notes. With great forward momentum, Auer and her colleagues at Lawrence Group are looking ahead to new challenges in the continuation of the city’s renewal.