When Brian Burke was a senior at Providence College and captain of the hockey team during the 1976-1977 season, his coach, Lou Lamoriello, called the driven, hard-nosed young man into his office and told him he had to take the upcoming Law School Admission Test.

Though an excellent student who would be a Rhodes Scholar finalist, Burke, who was majoring in history and aspired to follow Lamoriello into coaching college hockey, declined.

Or at least he tried to. 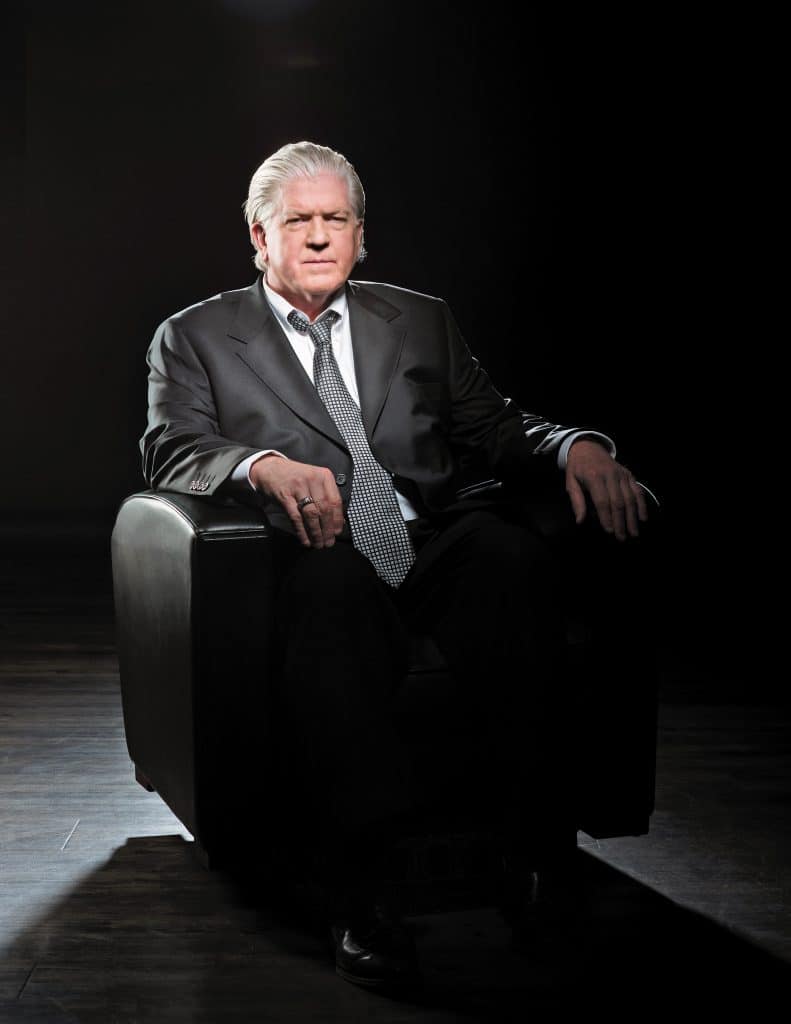 “I told Lou I had no interest in law school, but he said ‘that’s not a request,’” remembers the 61-year-old Burke of his conversation with the famously authoritarian coach. “Well, I score in the 98th percentile and next thing you know I’m applying to Harvard and Georgetown.”

But hockey still came first. Claimed by the Philadelphia Flyers, he played a handful of games for their minor affiliate in Springfield, Massachusetts, in the spring of 1977 and then followed the team the next season when it relocated to Portland, Maine, and won the American Hockey League’s Calder Cup.

Not that Burke was a major factor.

“My statistics would lead you to believe I played 20 games as a defenseman, not a whole season as a forward,” says Burke, who managed all of 3 goals and 5 assists in the regular season and no points, but a whopping 25 penalty minutes in just eight playoff games.

“If I were you, I’d go back to school,” Philadelphia General Manager Keith Allen advised Burke during the offseason. However well-meaning the counsel, Burke says it felt like “a kick in the groin.”

A few years later, with a Harvard Law juris doctorate instead of Allen’s foot under his belt, it felt a lot better. Call it a goal by Burke, with assists to Lamoriello and Allen.

Though never having made the NHL as a player, Burke holds a league record for having served as general manager of five teams, including an interim stint with the Calgary Flames, where he has been president of hockey operations since 2013, combining legal smarts and puck sense, and primarily crediting the former.

“I’d encourage everyone to get a law degree. It helps so much with how you approach business and life itself. My law degree got me where I am.”

“I’d encourage everyone to get a law degree,” says Burke during a colorful and sometimes salty conversation from his Calgary office. “It helps so much with how you approach business and life itself. My law degree got me where I am.”

Burke’s on-ice role in the Alberta city with its striking views of the Canadian Rockies may actually be less hands-on than in his previous tours of NHL duty, which included being general manager of—in reverse order—the  Toronto Maple Leafs, Anaheim Ducks, Vancouver Canucks and Hartford Whalers (Carolina Hurricanes since 1997).

At all those stops, Burke almost had the dictatorial power he demanded when choosing players and coaches, and negotiating contracts. Now his position may be more advisory, with him filling a gap between the overall president, Ken King, and General Manager Brad Treliving, whom Burke hired from the Phoenix Coyotes after cleaning house in the spring of 2014.

But Burke’s also part of an organization whose ownership group, Calgary Sports and Entertainment, includes the junior hockey team Calgary Hitmen, the National Lacrosse League’s Calgary Roughnecks, the Canadian Football League’s Calgary Stampede, and a minor league hockey team in California. There are lots of opportunities for Burke to weigh in on sports law and the business of the overall operation.

“I thought I’d miss being general manger, but it’s much less of a day-to-day grind now,” says Burke. “And I’m involved in many areas. We have a great president in King.”

And no one doubts Burke’s DNA is embedded in a Flames team that was one of the NHL’s surprises this past season.

Few expected the Flames, whose sole Stanley Cup came in 1989, to be much of a factor, as the team can be disadvantaged for multiple reasons, among them the remoteness of the market in an NHL bent on expanding its footprint in glitzy U.S. cities, including Las Vegas, whose Golden Knights take to the ice this October.

But Calgary qualified for the postseason for the second time on Burke’s watch, and while they were quickly eliminated by one of his former employers—Anaheim—the Flames are again a force to be reckoned with in the NHL’s Western Conference.

The way to the NHL

Much as Burke downplays his hockey skills for landing him in an NHL front office, he probably wouldn’t have gotten there without wearing a minor league uniform. Though a low-scoring Maine Mariner well down the Flyers’ depth chart, the young Burke developed a kinship with a  then-Flyers assistant coach, the late Pat Quinn—also a former player who earned a law degree and went on to a distinguished career in hockey management.

Nine years after that Calder Cup championship of 1978, Burke joined ancient  Mariners at a raucous reunion in Portland. “It’s amazing how great a player you seemed to have been nine years earlier after 15 beers at 3 a.m.,” Burke remembers with a laugh. 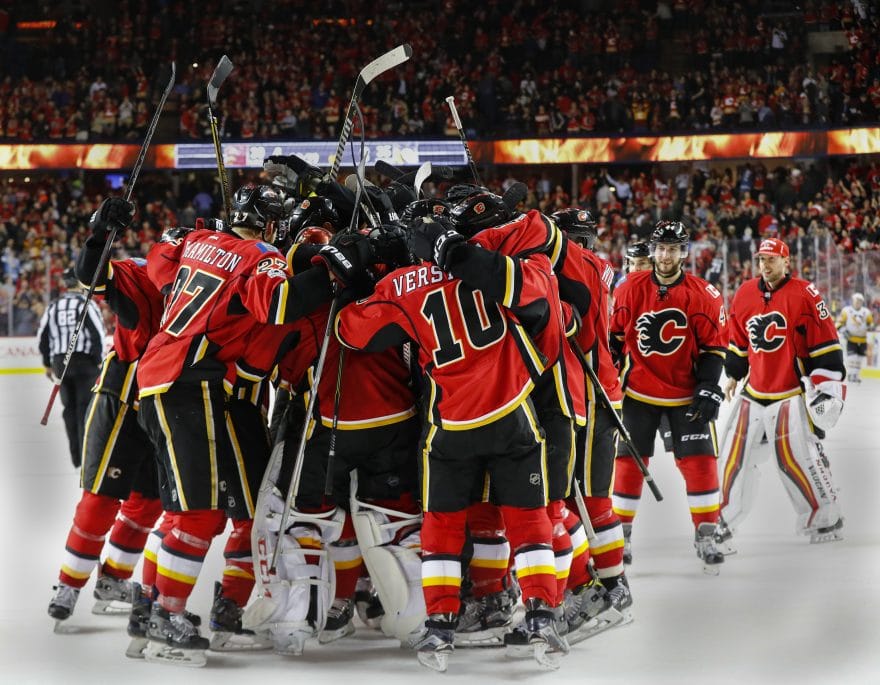 Only by now he was Brian Burke Esq., 30-something and well established as an agent, having at the time scored the biggest signing bonus ever for a U.S. college player, Brett Hull, who had left the University of Minnesota-Duluth early to sign with Calgary and would go on to be the most feared sniper of his era.

In Burke, Quinn saw the aggressive negotiating skills that could be put to use in Vancouver, inviting him to come aboard as director of hockey operations, which enabled him to go toe-to-toe with agents over players’ contracts.

Some years later, in 1992, Burke couldn’t resist the opportunity to be general manager of a Hartford team struggling in a small market and substandard building. But it was a no-win situation, and after one season he joined NHL headquarters in New York, working under the progressive new commissioner Gary Bettman. Though known best, and perhaps unfairly, for disciplining players for on-ice excesses, Burke was entrusted with far more than just handing out fines and suspensions.

“Gary placed great value in my law degree,” says Burke. “People may remember me for discipline, but I was involved in collective bargaining for players and officials, rules changes and international tournaments, and settling a work stoppage.”

Then in 1998 when the Canucks needed a new general manager, Burke returned and in his six years there, the team did almost everything but win the Stanley Cup. Through Burke, the team acquired the Swedish brothers Daniel and Henrik Sedin, who made the team an offensive juggernaut. But after another early playoff exit in 2004 and with the team under new ownership, his contract was not renewed.

The following year Burke did TV commentary before going south to manage the Ducks, adding grit to a talented lineup, and resulting in the only Stanley Cup of his career in 2007.

In the fall of 2008, he opted to leave sunny California to be general manager and president of that pressure cooker known as the Toronto Maple Leafs, an NHL charter member that hadn’t won the Stanley Cup since 1967. Despite roster and coaching shakeups, the Leafs’ fortunes didn’t improve under Burke, and with the team sold, he was dismissed in early 2013.

“I’ve only [been] released by teams twice, and in both cases the teams were sold,” say Burke. “I’m not bitter about Vancouver or Toronto; when a team is sold there’s a 90 percent chance you’re going to be replaced.”

Breaks of the game

It’s an often-merciless game, on and off the ice, and Burke is reminded about his old quote that one must be “a cold-hearted bastard” to work in sports management. For a general manager, hiring and firing coaches, trading or demoting players, or granting them their outright release are all in a day’s work. Burke, who has experienced that unpleasantry from all angles, chooses to rephrase his feelings.

“You’ve got to have that gene to trade a player whose father is dying of cancer or whose wife is eight months pregnant, because the good of the team comes first. I’ve had to do just that.”

But there’s an area in which Burke is anything but cold-hearted.

His six children, all grown, included an openly gay son, Brendan, who was student manager of the Miami (Ohio) University hockey team, and died along with a friend when their car crashed on an icy highway in Indiana in February 2010. Despite decades of being immersed in hockey’s famously macho culture, the elder Burke was comfortable with Brendan’s orientation, although he did worry about how the rest of the world would respond.

Since then, Burke’s activism for gay acceptance has only intensified. He can’t seem to say no to speaking engagements at schools. He’s marched in gay pride rallies in Toronto and Calgary, and even advised the National Football League on anti-bigotry. In pregame skates, the Flames sometimes wear pro-tolerance jerseys and wrap their sticks with rainbow tape.

“If you’re the general manager of a Canadian team, you have the platform and profile to be influential,” he says, adding that a prominent hockey personality may have more clout in puck-mad Canada than any U.S.-based superstar may have in America. “I’m proud of my involvement and how young players are supportive of this cause. The players I ask to get involved do so; those I haven’t asked will ask me why I haven’t asked them. It’s great they want to get involved.”

If, of course, they really can play.