Turning the legal key to lock in healthy M&A deals

Imagine being asked how to build a bridge so it meets state and federal regulations—after the materials and contractors have been chosen and the construction has already begun.

That, says Carrie Benedict, is precisely what she and her team at KeyBank try to avoid when it comes to merger or acquisition deals. In the seven years since she was hired, she’s worked to promote and implement a more efficient process. She ensures that she and her team are looped in before a deal gets off the ground, giving them time to consider the many regulations and rules governing the industry. 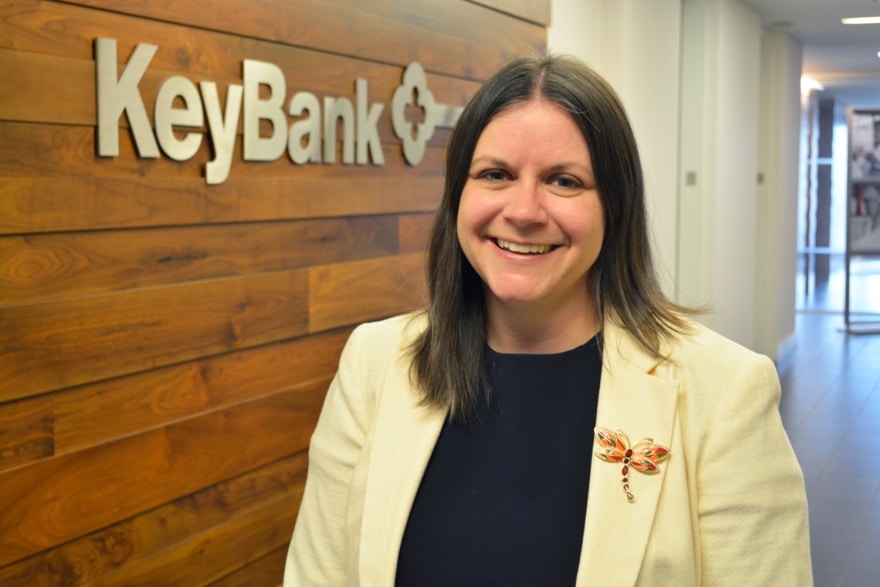 That approach, she estimates, can save the bank a significant number of hours on a given deal. As she explains, if her team is not consulted when the structure for the transaction is built then it can mean more time spent reworking that structure after her team has weighed in with relevant legal and regulatory considerations.

“We’re not a trillion-dollar bank, but we are the 13th largest in the nation with over $181 billion in assets and therefore beholden to all applicable regulations,” says Benedict, the bank’s associate general counsel. “This means it’s much easier, faster and more efficient if my team and I are advising from the start.”

A healthy amount of risk

Coming from nearly a decade of working at firms, Benedict enjoys engaging in projects from start to finish.

“Depending on the circumstances, I may say that while a certain venture is technically permissible under all laws and regulations, there may be other risks to consider that would cause our banking regulators to not support it—or it may simply be impractical to execute,” she says. “This keeps KeyBank from wasting time and money going down business dead-ends.” 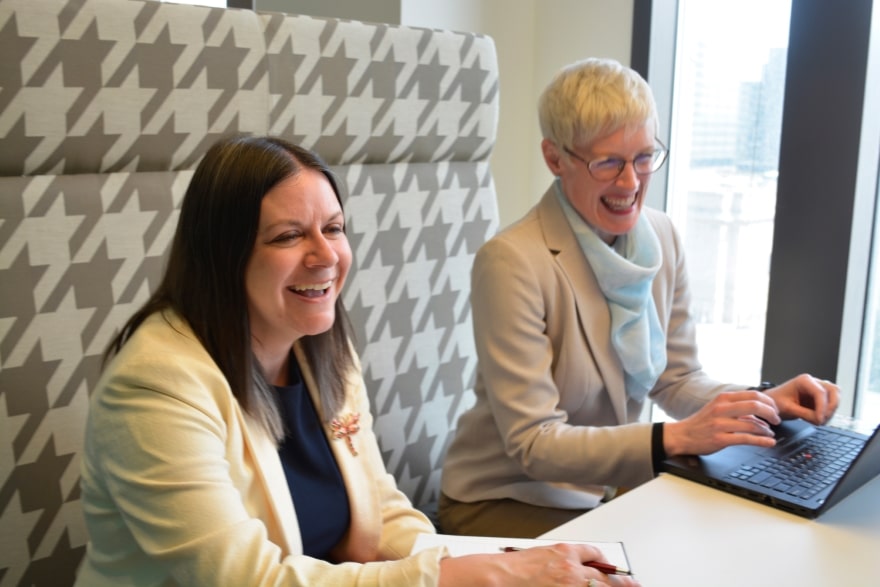 In most cases, however, she not only finds a way to make deals work but helms the legal charge.

In 2019, she was the primary counsel on KeyBank’s acquisition of Laurel Road, a business that focuses on the financial needs of healthcare workers. KeyBank has a business sector dedicated to this area, so this was a very important acquisition, according to Benedict.

“We completed everything in 2019, and since then, we’ve been steadily growing the healthcare-focused side of our services,” she says. “Last spring (2021), we were able to launch a national digital bank for doctors and also recently announced expanding offerings for nurses.”

Although Benedict is the primary counsel on KeyBank’s mergers and acquisitions, she says other members of her team have specialties, too. For example, one person specializes in identifying issues related to executive compensation for the employees of the target company KeyBank is looking to acquire.

While KeyBank’s human resources lists her as manager of six attorneys and one paralegal, she feels that she’s more often a peer as they usually work together on projects.

“I don’t bother with hierarchies or length of employment; we’re all down in the legal trenches together,” she says. “I may have been at KeyBank for well over seven years now, but I’m often still learning as much from my team as they are from me.” 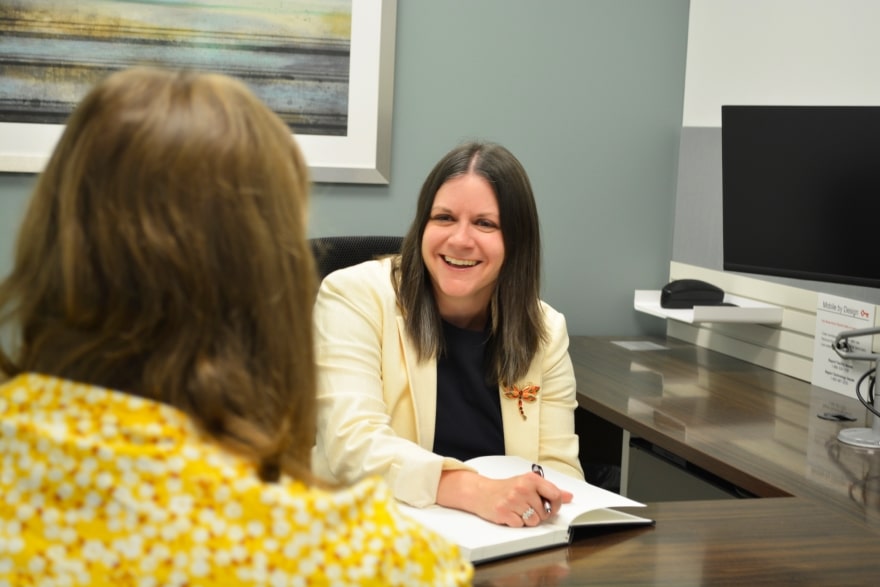 For instance, Benedict says that two of her team members specialize in banking regulations and are more expert than her in that area. So, when she and her team are working on bank regulatory projects, those two lead the project instead of her.

Benedict is currently involved with a project related to compliance with a banking regulation called The Volcker rule, which prohibits banks from proprietary trading, and one of her team members is taking the lead.

“I’m really proud that we work as a team, highlighting each member’s skills, talents and expertise, so we can accomplish the best work for ourselves, for KeyBank and those with whom we work on the outside,” she says.

While Benedict loves her in-house position and enjoys working with a team of lawyers, she started her career as an accountant after obtaining bachelor’s degrees in accounting and English from Heidelberg University.

“After just a few weeks in college, I quickly realized that writing would be something I’d need throughout my life, no matter what career I chose,” she says. “Over twenty years later, I can say that I definitely made the right choice.”

Around the time she graduated in 2001, a new regulation went into place that anyone sitting for the Certified Public Accountant licensing exam needed to have at least five years of schooling. So, she attended Case Western Reserve University the same year and left in 2002 with her master’s in accounting in hand. Shortly thereafter she obtained her CPA license.

For nearly half a decade, she worked in her dream job as assurance manager with the firm Grant Thornton. However, the four-to-five-hour drives to meet clients in West Virginia or Pennsylvania—lovely small towns but a bit quiet for visitors—were burning her out. 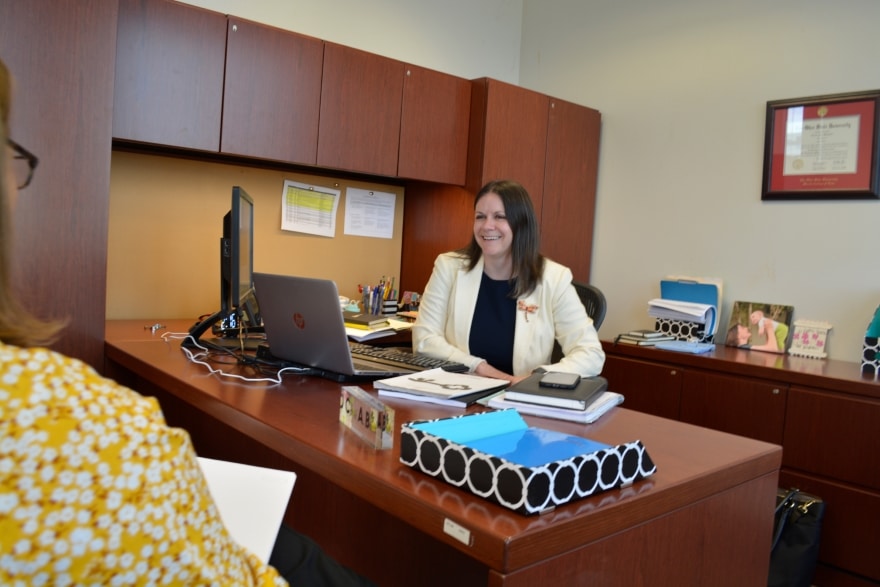 “We did several securities transactions and helped one company go public,” she recalls. “On the deal, I got to work closely with the attorneys and was fascinated by the securities work, which I saw as a merger of law and accounting.”

That project had her turning over a new career leaf. She recalls working the same long hours as the attorneys, but while they went home at night, she was “tossing and turning in some hotel in the middle of nowhere.”

She adds, “When working long hours, sleeping in your own bed at night can make all the difference in the world.”

So, in 2007, she left the firm for a classroom, attending The Ohio State University Moritz College of Law. After graduating three years later, she considered working for the U.S. Securities and Exchange Commission but didn’t want to leave her home state of Ohio. Instead, she joined the firm Benesch Friedlander Coplan & Aronoff as an associate for its corporate and securities group.

Not until 2015 did she find the opportunity she has now.

“I love completing transactions with my team. The best part is that in M&A deals both parties get what they want—unlike litigation where even the winner may feel like they’ve wasted time and money,” Benedict says. “Being in-house, I get to see the impact of the acquisitions and watch how they actively help KeyBank grow over the years.” 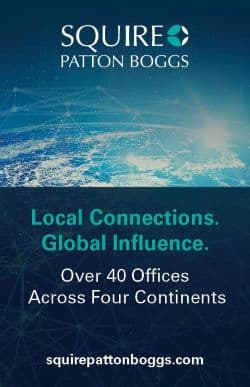 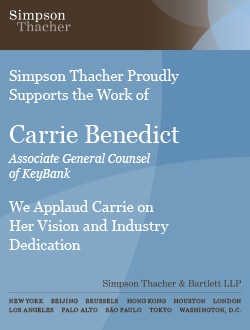 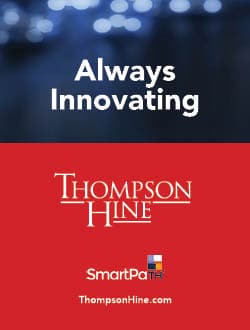