A passion takes flight for one general counsel

Curtis Landherr has always been interested in the aviation industry. Before becoming general counsel at aircraft manufacturer Cirrus Aircraft in 2014, Landherr worked as a litigation attorney for a Kansas City-based firm where he specialized in product liability defense cases that often involved aviation clients.

“Even though I wasn’t a pilot, I found those cases to be some of the most interesting,” says Landherr. After five years at the firm, Landherr set his sights on moving to an in-house counsel career and joined the team at a pharmaceutical and medical device company, whom he had represented at the firm. 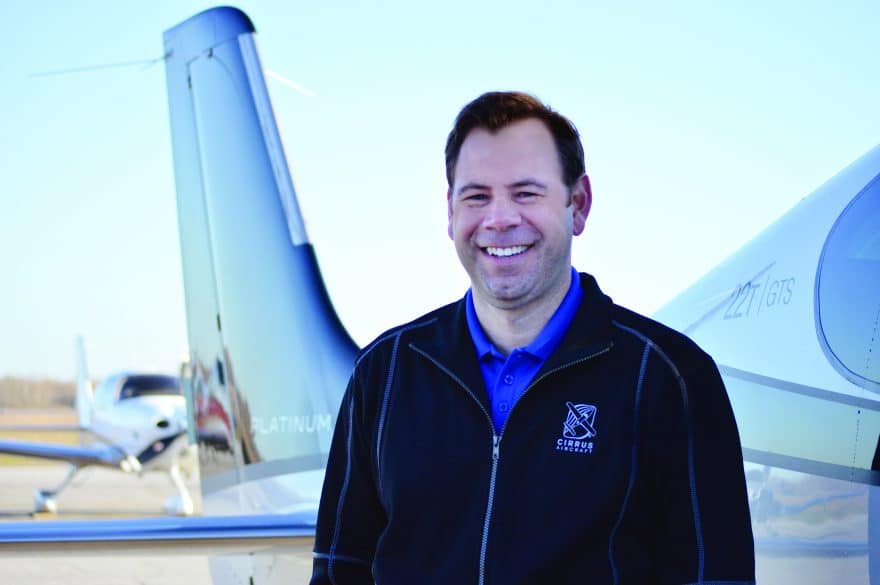 While Landherr had enjoyed the combative aspects of life as a courtroom litigator, he found that his interests began to shift as he gained experience. “My favorite days in the law firm life were those when the client or their general counsel was in and I was really problem-solving. That’s what got me most excited,” he says.

Following a four-year stint in the pharmaceutical industry, Landherr joined market-leading satellite-based navigation company Garmin. There, Landherr was named a 40 Under 40 honoree by a local business magazine and was able to gain valuable experience as assistant general counsel while pursuing his personal interests through his work with Garmin’s aviation division. “Garmin was such a great opportunity and experience.  It’s just a lot more fun to practice law in conjunction with a company that makes cutting-edge, cool products that you can use and experience firsthand,” he says.

Following seven exciting years at Garmin, Landherr left for his first general counsel role when he joined food ingredients company Corbion as its first in-house legal counsel. In this role, he was tasked with creating a legal department from scratch, an experience that would serve him well upon his arrival at Cirrus three years later when he would be asked to do much the same thing.

“When the Cirrus opportunity came up it was just a perfect fit to match what I like to do legally with products that I find fascinating and in a culture where a passion for flying is everything. In both GC positions I started by hiring a seasoned, experienced paralegal. It just provides great support for me and what I need to do to set up things in a very cost-effective way. Eventually I will look to continue to grow the department through other attorney hires,” he says.

A niche in safety and technology

Founded in 1984, Cirrus Aircraft is a Duluth, Minnesota-based company that has produced more than 6,000 small, propeller-driven planes. In his role as general counsel, Landherr is responsible for all legal affairs of the company.  Primarily this consists of managing worldwide litigation, contract reviews and negotiations, as well as providing regulatory support to the organization and a slew of other corporate counsel tasks.

Owned by China Aviation Industry General Aircraft, which is itself owned by a large Chinese state-owned enterprise, Cirrus is an ambitious company that has introduced or led several new innovations to the market. These include an all-glass display control panel in the cockpit, composite aircraft construction and an emergency parachute system called the Cirrus Airplane Parachute System (CAPSâ) that has already saved more than 130 lives. “The real hallmark of our innovation is that we’ve made, and are continuing to make, the flying experience better and safer for pilots and their passengers,” says Landherr.

While the company currently producer three FAA certified models — the SR20, SR22 and SR22T — Cirrus is preparing to make a bold move into the single-engine jet market with the introduction of the Cirrus Vision SF50â. The seven-seat, light jet aircraft was first demonstrated in 2008 and the first SF50 rolled off the production line in early 2016 and awaits an imminent FAA certification approval. “The Vision jet will be really the first personal jet, so to speak, ever on the market,” he says.

The company has already announced plans for two new expansion facilities, including a $12 million production and paint facility at the Duluth Airport for Vision jet production and the Cirrus Aircraft Vision Center at Knoxville’s McGhee Tyson Airport, which will be the company’s new customer experience HQ at which Cirrus will perform training, maintenance and repair, personalization and deliveries for the Vision Jet and SR-series.

From aviation to food service and pharmaceuticals, Landherr has worked in a variety of industries throughout his career but he says there are certain aspects of the job — ensuring compliance, litigation management, contract review — that are the much same regardless of the industry. “I think working in a number of different industries provides a broader perspective and just gives you a wider experience set to draw from when providing counsel,” he says.

Landherr’s experience across industries makes him not only a valuable component to the legal team, but the business side of Cirrus as well. “My role in the senior management team goes beyond just providing legal advice,” he says. “There are benefits to having someone with experience in different industries and adding a lawyer’s mindset and critical thinking to the mix, their analytical perspective, can be valuable to a company.”

Throughout his career, Landherr has worked to bridge the gap between the legal world and that of his clients and colleagues. A personable figure, he prides himself on his ability to relate complex legal issues to everyday people. “My door is open and I speak in regular language. You can’t be an effective lawyer if you can’t relate to your clients and I have worked hard though my interpersonal skills to be easy to work with,” he says.

Having finally landed at his dream job within the aviation industry, Landherr is eager to take advantage of all the perks that come along with a career in the industry. While some companies might be reticent to let its top legal mind take to the skies on his own, Cirrus has actively encouraged Landherr to pursue his pilot’s license. “I started flying lessons earlier this year.  It’s a lot of fun, and while it’s a challenge to fit in the time with the job and family, I’m committed to it and am hoping to get it finished within the next six months,” he says.

With a wealth of experience across myriad industries and a passion for aviation and products that change people’s lives, general counsel Curtis Landherr will help Cirrus Aircraft pursue the innovations that will take the company to the next level as a premier provider of personal light aircraft.