Protecting the league on and off the gridiron

The 13 days between the NFL’s conference championship games and the Super Bowl are filled with many things. There are practices, video sessions, meetings and media obligations for players and coaches. There are also parties and other events for fans in the host city.

There’s also a common feeling among everyone involved: anticipation.

And not unlike the players preparing to play in the biggest game of the season, Dolores DiBella certainly felt a lot of anticipation before her interview for a job as an in-house lawyer for the National Football League. 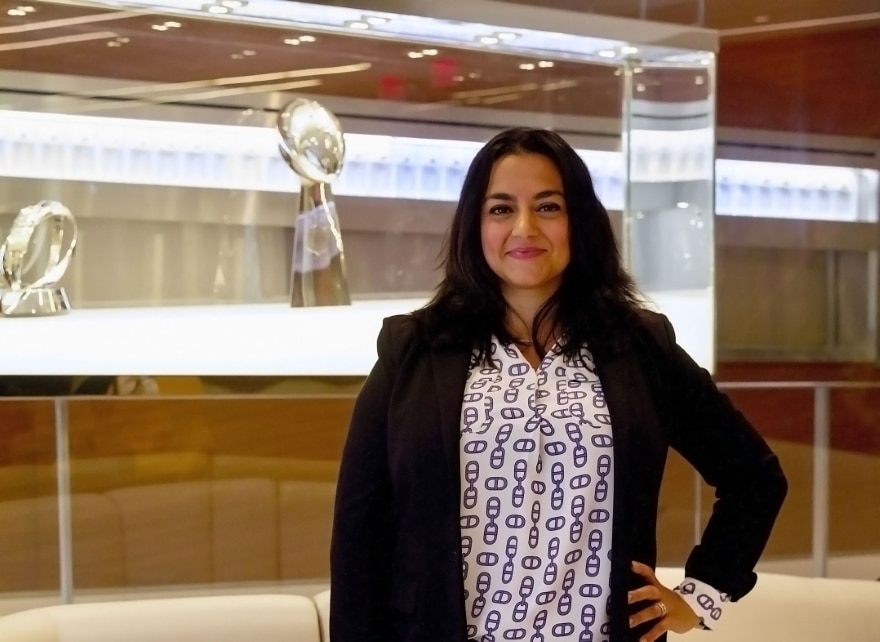 “I went into that interview with strong legal skills but without football expertise—and I was hoping that there wouldn’t be a test about the rules of the game,” DiBella says. “Before being hired, I had only been to one preseason game many years before.”

Most successful NFL teams are led by coaches and general managers who played the game or have years of experience with the sport. But that’s not usually the case in the league’s legal department.

“We want to hire the best lawyers, not only the biggest fans,” says DiBella, the league’s senior vice president of legal affairs.

When she joined the league more than a decade ago, DiBella was a litigation and intellectual property specialist, but just as the league has expanded, so has her role. Now, in addition to managing those areas, DiBella also oversees risk mitigation and employment law.

But litigation is her bread-and-butter, and with a league composed of 32 franchises estimated to be worth more than $100 billion, there are legal challenges presented every season. Ranging from antitrust and commercial disputes to employment and intellectual property matters—many of which are often highly publicized—DiBella and her team of nine are always handling new and challenging cases.

Currently, DiBella is working on cases that run the gamut, from competition challenges to the league’s distribution of game content and merchandise, to lawsuits involving employment and tort claims made by current and former NFL coaches.

“No company wants voluminous litigation and certainly our legal team is always trying to reduce that risk,” DiBella says. “But on any given day, you’re going to be challenged and working on varied topics. My days are never boring.”

Another big topic around the league’s offices on Park Avenue in New York City is sports gambling, which is becoming legalized in more states every year. Also, developing industries, like cryptocurrency and NFTs, or non-fungible tokens, bring unique challenges.

“There are rules and compliance utilized in every area, designed to preserve the integrity of our game and our league,” DiBella says. “But digital developments are often outpacing existing legal jurisprudence, so we are constantly reading and connecting with subject matter experts in these emerging areas.”

Having so many franchises and global reach means each club’s—and the league’s—intellectual property needs to be protected. DiBella and her team handle IP protection for all 32 teams at the league level.

Without a boundless legal budget, she tries to come up with creative and cost-effective ways to snuff out counterfeiting of physical goods with team and league logos and other trademarks. She also combats piracy of the league’s digital content.

“IP protection has been my passion practice since joining the league,” DiBella says. “We work in partnership with law enforcement and industry organizations to go further in the protection of our authentic products.” 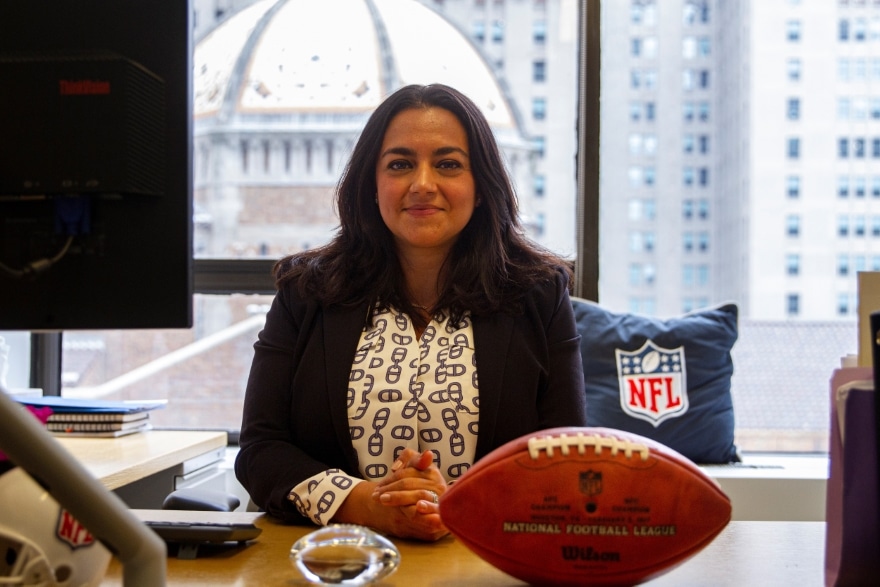 She says the league must be skillful in how it protects IP rights while ensuring its content remains accessible and engaging to fans.

DiBella also sits on the legal department’s diversity council, which works to ensure the NFL is advancing its diversity, equity and inclusion, which includes making sure there’s a wide demographic amongst attorneys representing the league.

“We’ve always had strong diversity commitments, but now we’re being even more intentional and impactful about it,” DiBella says. “We also want improved gender representation on our matters and more female and diverse partners leading our cases.”

“They truly enjoyed their careers and encouraged me to pursue the same path. I was sold,” DiBella says.

After graduating Georgetown, DiBella earned a juris doctor from Columbia Law School in New York City and then spent more than five years at Proskauer Rose before joining the NFL in early 2012.

One of the female general counsel clients she worked with at Proskauer was intentional about inviting her to depositions and important client meetings. She acted as a mentor for DiBella, demonstrating in tangible ways the successful avenue to in-house practice. With more than a decade in the NFL office, DiBella takes the opportunity to mentor and guide younger women attorneys, especially in a sports industry traditionally dominated by men.

DiBella partners with many people in and outside of the NFL, including Cléa Liquard and Derek Ludwin, partners at Covington & Burling LLP, to mentor young lawyers and elevate women and diverse professionals.

“Dolores is a hugely talented lawyer, with terrific strategic vision and practical judgment,” the pair say. “Her skill and smarts are combined with generosity, humor and a personal warmth that make Dolores such a pleasure to work with. We are lucky to be able to call Dolores our colleague and client.”

DiBella says she always knew she would end up as an in-house attorney, but it is always more challenging finding a litigation-based in-house position—there are many more opportunities for transactional attorneys, she says.

“I was applying for roles and not looking for a specific industry,” she says. “I was looking for something that would be engaging in intellectual property and litigation, and I was open to a variety of paths.”

Reflecting on her career, she says she wouldn’t have predicted working in sports. But she loves her colleagues and is passionate about the work, which is a key to success anywhere, but surely at the NFL.

“I always knew I’d be happy being an in-house lawyer,” DiBella says. “That it’s with the biggest league in the world is icing on the cake.” 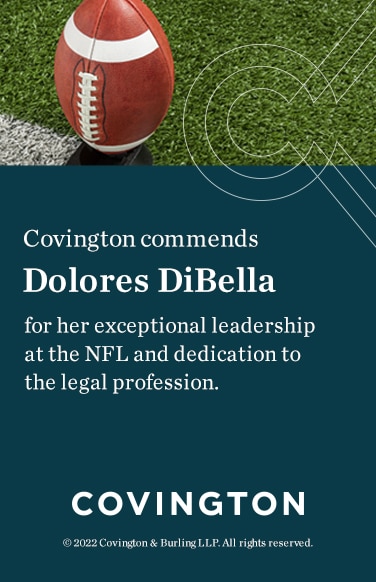 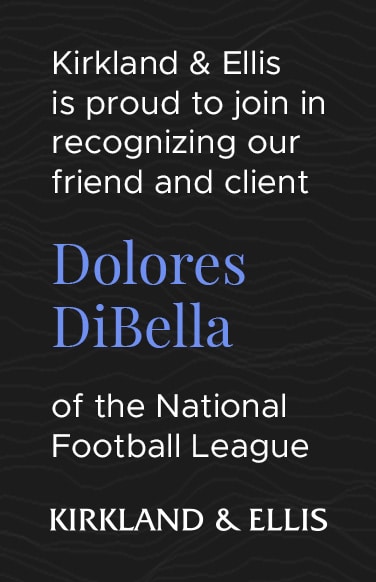 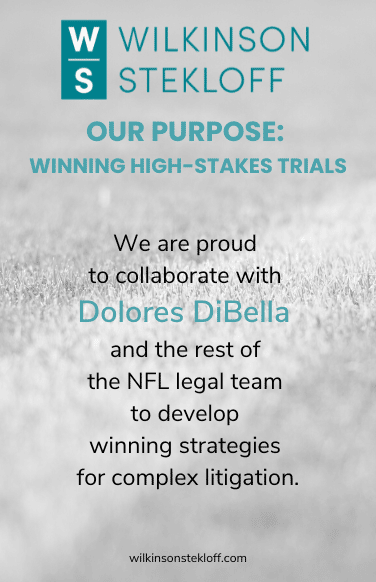 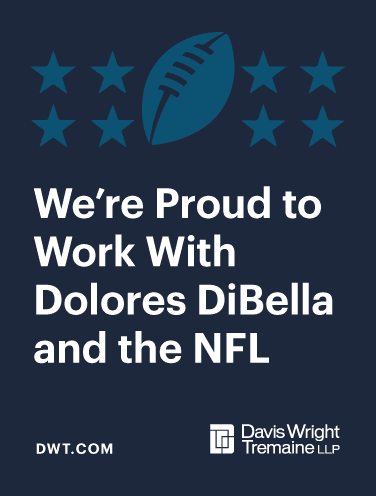 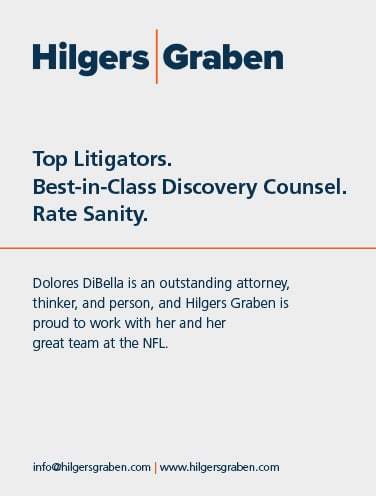