American Trading and Production Corporation (Atapco), based in Baltimore, traces its roots to a legendary brand and family enterprise with more than 100 years of history. Originally the American Oil Company, the business was established in 1910 by Louis and Jacob Blaustein, who started out with a horse-drawn wagon outfitted with a 270-gallon tank for delivering kerosene.

The business grew into Amoco, the iconic brand responsible for the first drive-in filling stations and eventually one of the largest chains of gas stations in the United States. Landmark moments over the course of Amoco’s history include the invention of the world’s first anti-knock, lead-free gasoline mixture, the fueling of Charles Lindbergh’s famous trans-Atlantic flight, and the 1954 merger with Standard Oil of Indiana. 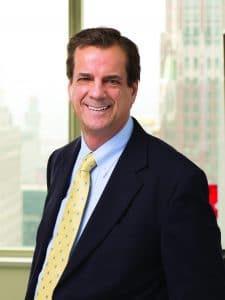 Atapco was formed in 1931 to expand and diversify the Blaustein family’s business activities. Over the years, Atapco expanded into various sectors of business, including oil and gas exploration and development, marine transportation and manufacturing.

Atapco Properties entered the real estate market in 1961 with the construction of The Blaustein Building on North Charles Street in Baltimore, which remained the company’s headquarters until 2001. For several decades, the business continued to accumulate real estate assets, adjusting its branding accordingly. Currently operating through numerous subsidiaries of Atapco Properties, the firm’s active business interest is the acquisition, development and operation of high-quality commercial real estate properties. Behind the scenes, Jeffrey McCormack serves as the company’s general counsel and executive secretary, protecting an active legacy in quality and integrity.

Keeping it in the family

McCormack has been working with Atapco since 2005, when the former in-house counsel, Vince Hock, retired. While he had been practicing law as an in-house counsel since 2000 and previously at private firms for approximately 15 years prior, Atapco’s reputation, philosophy and success were big draws to the position.

The well-being of the company is his priority and that carries through from development to retail and office leasing. “As an in-house counsel in this business, I can be involved in a redevelopment project and help us reach our goals more smoothly through zoning approval, project approval, property acquisition, environmental impact and contracts,” he explains. “My priority is adding value to the outcome of the contracts involved — my efforts help Atapco to have the best outcome possible.”

McCormack has been involved in several recent developments with varying intricacies. “We have been focusing quite a bit on transit-oriented projects: housing conveniently located next to public transportation,” he explains. “Right now we are developing a large townhome complex in Sterling, Virginia, in the Washington, D.C., suburbs, by a planned metro stop. In each project, we have lots of stakeholders, so satisfying everyone is highly involved. These projects take significant upfront capital, several years prior to actually selling lots.”

He adds that the benefit of retaining in-house counsel lies in immersion. “In-house counsel has the advantage of time and has the institutional knowledge to see the pitfalls or holes in a contract that aren’t necessarily in the best interest of my company,” McCormack explains. “Because of that, I have the understanding to explore how these opportunities would look five years down the road. Outside counsel doesn’t have that luxury.”

It’s not only McCormack’s experience that makes him a perfect fit for Atapco. He also brings strong analytical abilities and effective communication to the table. “What I do well is my ability to analyze a situation that has a legal aspect and then explain it in a way that gets to the heart of the matter,” he says. “You have to be able to explain how it impacts what we are trying to do. I know how to translate legal into practical, understandable advice for the company from a business slant. You have to look at how it might play out.”

Through his interactions with colleagues, McCormack encourages highly examined responses as opposed to instinctual reactions. Solutions that are beneficial in the long term are the basis of Atapco Properties’ continuing success and long-term value.