Always gassed and ready to go

Houston was the proverbial tale of two cities in early September when Kevin Feeney, chief legal officer and senior vice president to one of the region’s major corporations, found time for an interview with Vanguard.

“Parts of this city are still underwater but our main office is fine,” said Feeney, who runs the Americas side of the legal department of the Paris-based multinational Air Liquide S.A., whose regional headquarters are on Houston’s west side, a couple of miles away from what was essentially ground zero for nature’s wrath. “But traffic is gridlocked and will be until the flooding subsides and the roads open.”

By now Hurricane Harvey was loosening its grip on the western Gulf Coast, and in its wake could be an increased need for Air Liquide’s specialty gases and services, so valuable for welding and fabrication.

Operating in more than 80 countries and, since a prize 2016 acquisition, the world’s largest supplier of industrial and medical gases by revenue, Air Liquide’s products—especially nitrogen and medical oxygen—had been in high demand before the storm, with many of the region’s refining and petrochemical customers needing to safely shut down their facilities, and the area’s hospitals operating on heightened prepardness. Air Liquide operations personnel had worked around the clock to ensure the needs of customers and patients were addressed, and would be doing the same in Harvey’s aftermath.

“We’re here if they need us,” Feeney said. “This kind of storm impacts everybody’s business. And the safety of our employees, customers and the community is our number one priority.”

With the demands of the hurricane added to his normal busy schedule, there was a lot on his plate, and he couldn’t wait for any clouds to lift.

The holder of an undergraduate accounting degree and a juris doctorate from the University of Texas at Austin, Feeney worked in private practice with a local firm for about five years before joining the Air Liquide legal department in 1995 as a litigation manager. Several promotions later, he attained his present position in 2015.

Equally well-versed in international business and law, Feeney has been at the forefront of Air Liquide’s growth, which shows no signs of stopping after a couple of especially fruitful years.

“It’s a game-changer for us,” says Feeney, explaining the deal establishes Air Liquide as the largest player of its kind in North America, upping its revenues to over $20 billion and providing for a 65,000-strong global workforce serving 3 million customers and patients.

Air Liquide made its pitch to Airgas in 2015, and the transaction would consume the lion’s share of Feeney’s time and sweat for the next year. Under the terms of the mutually beneficial agreement—finalized in May 2016 after the Federal Trade Commission’s OK—Airgas shareholders received $143 for each share of common stock, and the company became a subsidiary of Air Liquide’s U.S. operations.

“It was all hands on deck,” Feeney remembers of the details that had to be ironed out. “We needed a lot of coordination among various departments, as well as with the Paris headquarters. It’s the biggest acquisition we’ve ever done. We’re now immersed in its implementation, and the integration and expected synergies are taking shape as planned.”

Those synergies better position Air Liquide to stay in growth mode, with over $300 million in possibilities identified, most of which the enlarged company says can be achieved in the next two or three years. That adds to Feeney’s to-do list, but at least he can share the workload with more lawyers, many of whom were retained from Airgas.

That marks a significant change from when he joined the company 22 years ago.

“When I came aboard I was just the fourth lawyer in the U.S.,” Feeney recalls of 1995, when he resigned an associate’s position at the prestigious Houston law firm of Beirne, Maynard & Parsons LLP to join Air Liquide. “We’re up to about 20 lawyers in the U.S., with 35 lawyers at our offices throughout the Americas. The work becomes more complex with Airgas, but we have good teams in place.”

That also may entail Feeney spending a lot of time away from his Houston-area home, traveling to the company’s offices in such far-flung destinations as Buenos Aries, Sao Paulo, Montreal and Paris, and keeping up with the latest legal developments throughout the hemisphere.

“It’s very important to have a team that collaborates; there’s a lot of commonality in the laws and business issues of all the countries in which we operate,” he says. “I want all the lawyers sharing their thoughts on whatever issues arise. I’m not one to micromanage good people.”

He may be too busy with contracts, compliance and the mergers-and-acquisition front to be looking over anyone’s shoulder. He’s confident in his ability to recruit, hire and develop the kind of legal talent that’s a good fit for a company intent on solidifying its stature as a global leader in gases, technologies and services for such industries as medical, chemical and electronics manufacturing.

Asked what’s next on Air Liquide’s list, Feeney can’t really say, other than to state what’s obvious: The company is committed to growth, and the legal department is there to assist it in all realms.

“You can never take your eye off the ball,” he says. “And you communicate. If you build trust and respect, and are solution-minded, you can start a sentence with a ‘no,’ but you’d better have a solution at the end of it.” 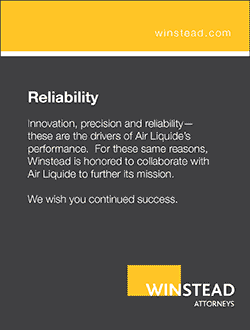 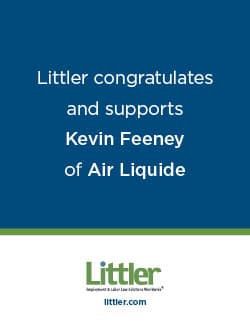 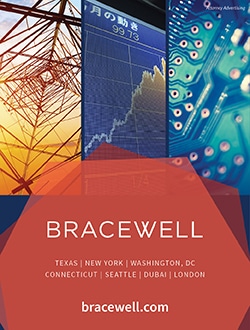