The past few years, innovation and adaptation became necessities. In a pinch, multi-million-dollar deals were carried out from kitchen tables and meals from Michelin-starred restaurants were enjoyed on splintery, wooden deck chairs in backyards. It’s not “business as usual” but rather “the show must go on.”

“We at Venus Concept weren’t quite so lucky,” Michael Mandarello says. “Our entire business revolves around people actually stepping into a spa or clinic. You can’t really get a hair transplant or fat reduction procedure from the sofa in your living room.” 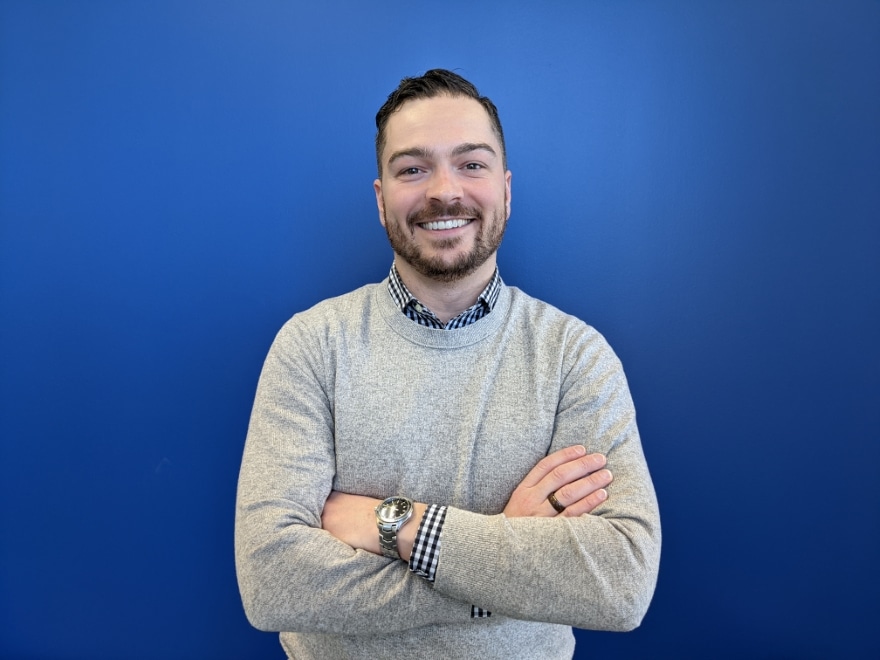 However, this doesn’t mean the global medical aesthetic device company hasn’t innovated, he says. In fact, Mandarello, the company’s general counsel and corporate secretary, says Venus Concept’s subscription model is unique in the industry. It allows clinics and spas to purchase Venus Concept equipment, devices and technology under a tailored, interest-free monthly payment plan instead of as an up-front cash purchase.

When Mandarello joined, the company was in the process of going public and acquiring another company. This allowed Venus Concept to broaden its investor base while acquiring robotic technology and expertise in aesthetic procedures and equipment.

“I was excited to come on board because Venus Concept is innovating in a space that was sorely in need of disruption,” Mandarello says. “We just didn’t know how much unexpected innovating we’d be doing once the global pandemic hit.”

Before quarantines and lockdowns, Mandarello was working with Venus Concept on a reverse takeover of Restoration Robotics, which commercialized the ARTAS system, the first and only physician-assisted, fully automated hair restoration system, he says.

An RTO merges public and private companies. The private company then becomes public without undergoing the traditional initial public offering process, saving time and money. When the RTO was complete, Venus Concept became the dominant business of the merged company.

“We not only went public but had to quickly learn what that means,” he says. “We needed to combine cultures and know-how, which wasn’t an easy task with the North American head office in Toronto and over 500 employees spread throughout the world and on almost every continent.” 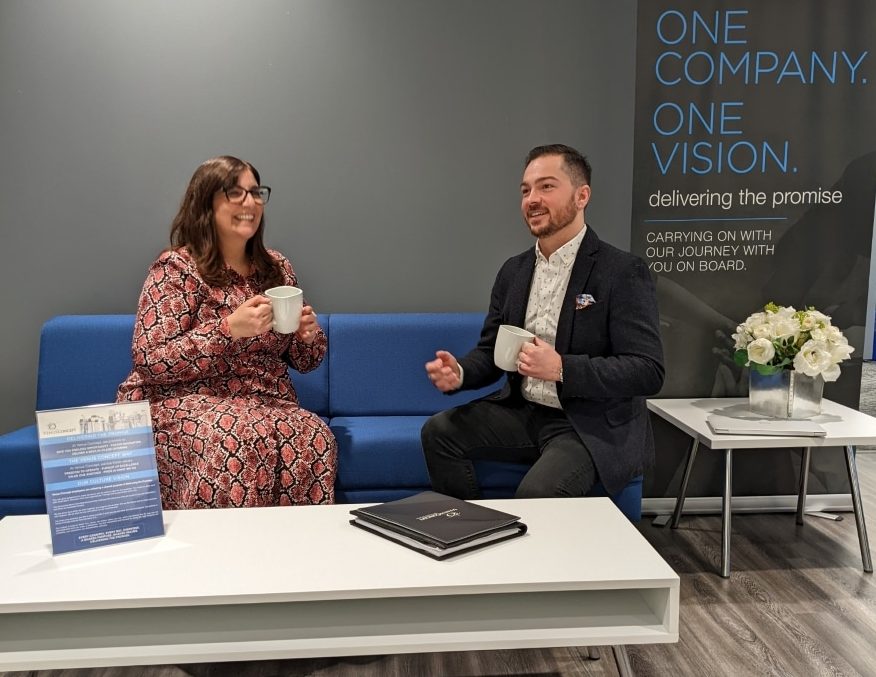 Three months after the merger, however, Mandarello and his team had to pivot to not only sustain the company through the pandemic but to thrive afterwards.

In addition to helping the company streamline, Mandarello also helped it complete five financing transactions, with net funding reaching nearly $100 million. He and his team advised on deal structure, negotiated terms of the financing and led the tactical execution of transaction with external counsel. This became the foundation for the company’s bounce back in 2021.

He also worked to anticipate legal issues and build an in-house litigation practice, which has allowed him to secure settlements and judgements resulting in the recovery of more than $1 million in bad debt and devices since mid-2020.

“We recently had multiple very big wins that are the culmination of hard work and perseverance from several departments,” Mandarello says. 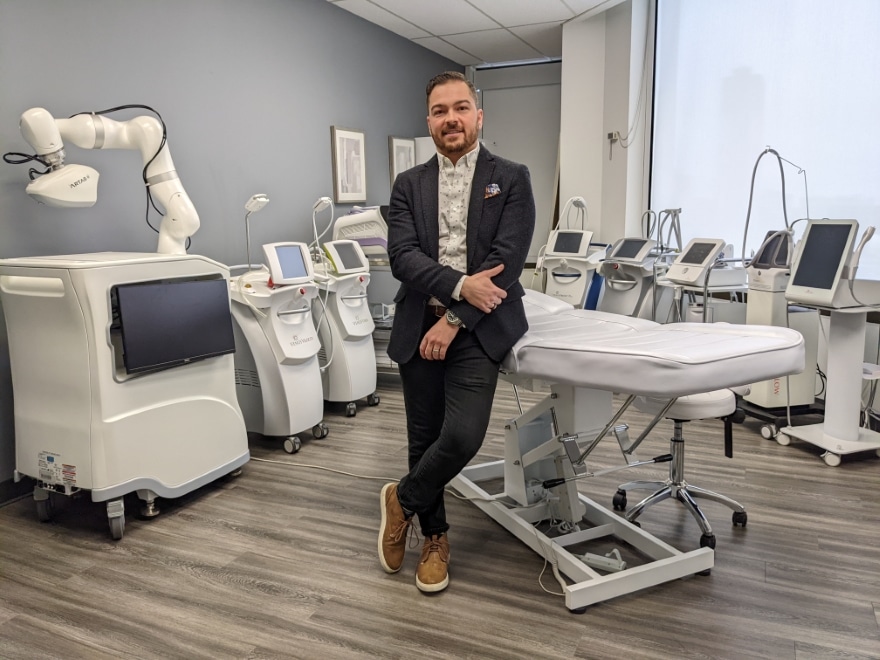 This includes the U.S. Food and Drug Administration’s October 2021 clearance of Venus Freedom, which uses radiofrequencies to treat muscle pains and spasms and to improve local blood circulation. The FDA also cleared BlissMax in January 2022, which offers solutions for fat reduction, cellulite reduction and muscle conditioning using three technologies in one platform.

Venus is currently working on introducing its Aime technology. The robotic platform uses micro-coring—extracting microscopic amounts of skin to tighten and smooth skin.

“It’s in Venus Concept’s DNA is to be a technology leader—constantly evolving and innovating, which is what makes my role extremely fulfilling,” Mandarello says.

Mandarello is proud of what he’s accomplished, not just at Venus Concept during a pandemic, but also since graduating from University of Windsor with his law degree. He started his career as an associate at Osler, Hoskin & Harcourt, one of the top Canadian corporate firms, where he handled mergers and acquisitions and corporate finance matters.

He also worked as corporate counsel with Walmart Canada Corporation and as the president of yourNed, an educational development and knowledge management solutions company. Yet, he says his favorite role by far was as legal counsel with the Toronto 2015 Pan/Parapan American Games, an international multi-sport event that hosted more than 6,000 athletes representing 41 nations in the Americas; it was the largest multi-sport event hosted in Canada.

“I can still see the legacy of my work as I drive around Toronto and see the sporting venues and housing for the games,” Mandarello says. 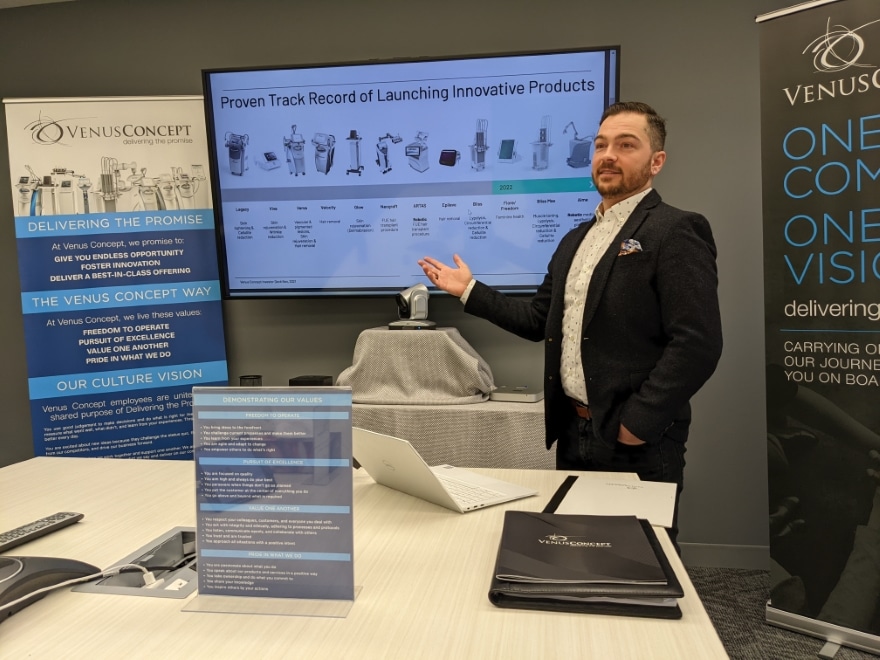 The games aren’t the only time he’s taken a deep interest in sports. He has been co-chair of the Champion Network of Young Professionals and chair and co-founder for Toronto Plays. Both support Right to Play, which uses sports to educate and empower underserved children living through poverty, conflict and disease.

He also chaired the Maple Leaf Sports and Entertainment Foundation Game Changers, which supports youth sports initiatives in Toronto. Under Mandarello’s leadership, the organization raised over $250,000 in net donations.

He was drawn to Venus Concept because he knew it would provide opportunities to be innovative and tackle new challenges. He liked that it wanted to be at the forefront of integrating robotics and artificial intelligence into medical aesthetic practices, too. In terms of his legal skills and expertise, Mandarello describes himself as a true generalist.

“I’m like a Swiss Army Knife, and that’s what I’ve enjoyed the most about my career: Applying my expertise to wherever its needed, whether at work or in the community,” he says. 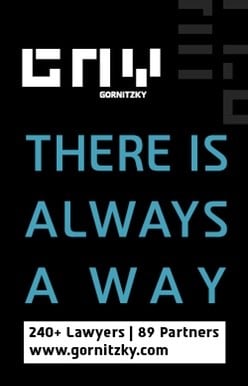 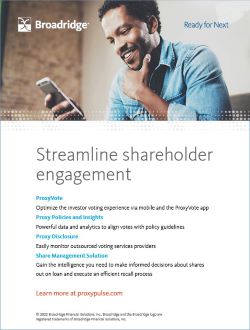 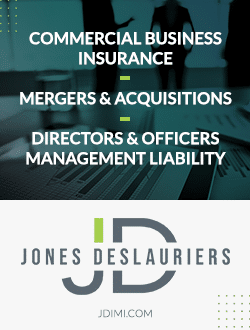 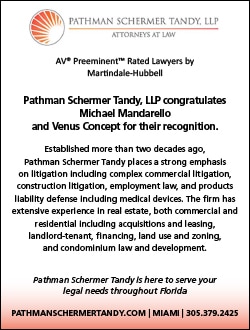 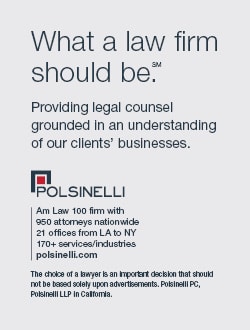 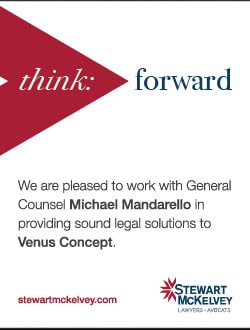