Michael Rispin remembers a time—not so long ago for the 31 year-old attorney—when he was working a fulltime job as an investigative paralegal for the U.S. Securities and Exchange Commission (SEC) during the day and attending classes at New England School of Law at night.

Rispin’s never been a stranger to hard work. He wrestled throughout high school, while maintaining excellent grades, paid his own way through law school and now, as a successful attorney, uses his free time to do pro-bono work for victims of domestic violence and sexual assault through the Woman’s Bar Association. 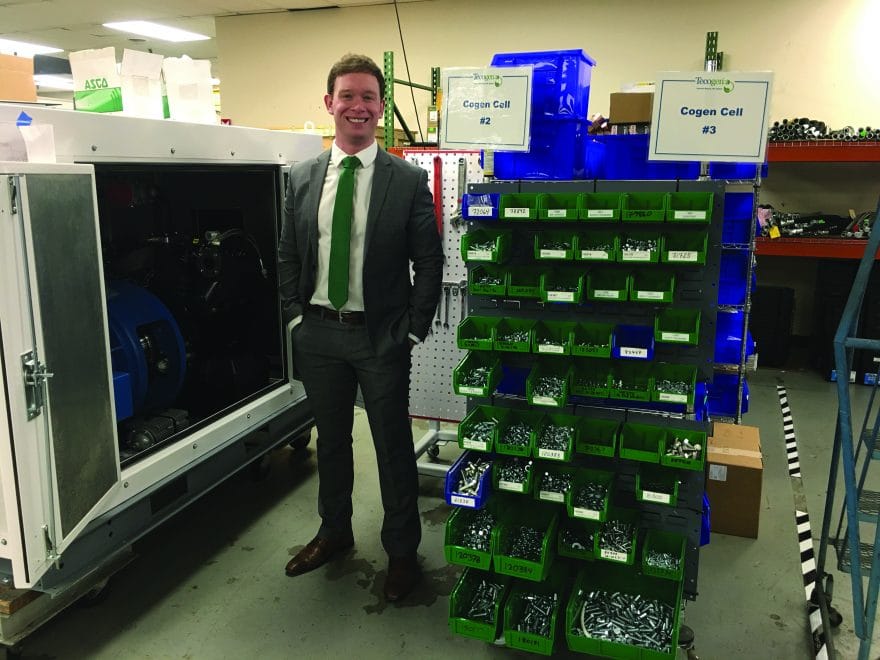 His pace has always been rigorous but Rispin think it’s given him an edge.

“I think my background puts a chip on my shoulder,” says Rispin. “I did anything I could to pay my way through school. I think it keeps me humble and gives me perspective. It keeps me hungry.”

His hard work has paid off. In 2013, Rispin was hired by Tecogen, a manufacturer of combined heat and power (CHP) generators before he’d even received his bar exam results.

Tecogen’s generators use natural gas to create electricity for buildings with high-energy needs, such as hospitals, schools, industrial facilities and residential complexes. Unlike typical generators that waste the excess heat from their engines and exhaust, Tecogen’s products capture and recycle that excess energy and use it to heat a building’s water.

Balancing legal counsel, inside and out

Of course, Rispin’s experience with the SEC didn’t just help him land a new job. It has allowed him to save Tecogen a lot of money by not relying on outside counsel to file its reports.

As a publically traded company, Tecogen is obligated to report all of its earnings and important events like business deals and changes in leadership to the SEC.

Rispin’s job is to take raw data about the company’s finances and business ventures and craft it into a narrative that makes it more easily understandable for shareholders and the public at large. When Rispin joined the company, he started filing all of Tecogen’s SEC reports, which must be meticulously written.

“The SEC will read your 10K and look for contradictions. If they find any they will issue a public letter that everybody can see and you’ll have to fix it, which can be embarrassing for a company.”

Though he acknowledges outside counsel can be indispensable, Rispin says it’s important to be cautious when seeking help from law firms. In some cases, this simply means mediating between business people and lawyers.

“Business guys want quick answers from simple questions when talking to a lawyer. You’ve got to narrow the questions so that outside counsel can answer them without billing a million dollars,” Rispin says.

“Business guys want quick answers from simple questions when talking to a lawyer. You’ve got to narrow the questions so that outside counsel can answer them without billing a million dollars.”

When he does have to consult with an outside firm, Rispin is selective. For smaller projects, for instance, he will work with a boutique law firm. This is a key transition from Tecogen’s old strategy which involved working exclusively with a large and more expensive firm for all tasks.

“You only bring in your big guns when it’s a big deal. Otherwise, you’re hammering in a nail with a jackhammer,” he says.

The other benefit of handling most legal tasks himself is Rispin gets to learn. No differently than his early years in law school, Rispin thinks the best education comes from hands-on experience.

Recently, Rispin learned a lot while overseeing the legal side of a joint venture between Tecogen and Czech CHP generator manufacturer, Tedom. Each company owns half of the venture, which is called TTcogen.

Rispin says that Tecogen will benefit from Tedom’s much more expansive product line which includes relatively small, 35-kilowatt generators that can be used in smaller apartment buildings and schools.

This opens up a new market for Tecogen, which only manufactures mid-size generators too bulky and cost-inefficient to be used by a smaller consumer. On the other hand, Tedom, which has had trouble entering the U.S. market, will benefit from Tecogen’s influence and status.

To make the agreement work for both companies, Rispin had to do a lot of negotiating. For instance, he and attorneys from Tedom agreed that Tedom, with its larger product line, won’t sell generators of the same size and output as those manufactured by Tecogen, especially in the U.S.

Rispin also helped create a contract between the two companies that makes it difficult for them to break up inequitably. The contract includes what’s known as a waterfall clause, which mandates that both sides go through several stages of negotiations before reaching a decision to break the joint venture.

Similarly, Rispin included a clause stipulating that in the event the joint venture dissolves, Tecogen, as the smaller company, must be given time to raise money through its status as a publicly traded company.

All for one, one for all

As he handles bigger contracts and greater responsibilities, Rispin’s role has become more managerial and less purely legal. He now oversees two legal assistants, one fulltime and one part-time. One of his greatest challenges is knowing when to step back.

“I spent a lot of my career doing everything myself. Delegating is difficult,” he says. However, he’s found that his new colleagues are extremely capable and he can accomplish more by thinking about the productivity of his team as a whole.