In a sharing world, traditional rental car may be next to go

There are over one billion cars on the planet, and each one spends a majority of its time idle in parking lots, driveways and alongside ticking parking meters.

Turo’s founders set out to solve this inefficiency.

The car sharing company, originally known as RelayRides, was launched in 2009 and initially focused on providing hourly, peer-to-peer car rentals in Cambridge, Massachusetts. However, the economics for hourly rentals weren’t compelling, especially with ridesharing providers like Uber and Lyft arriving on the scene. 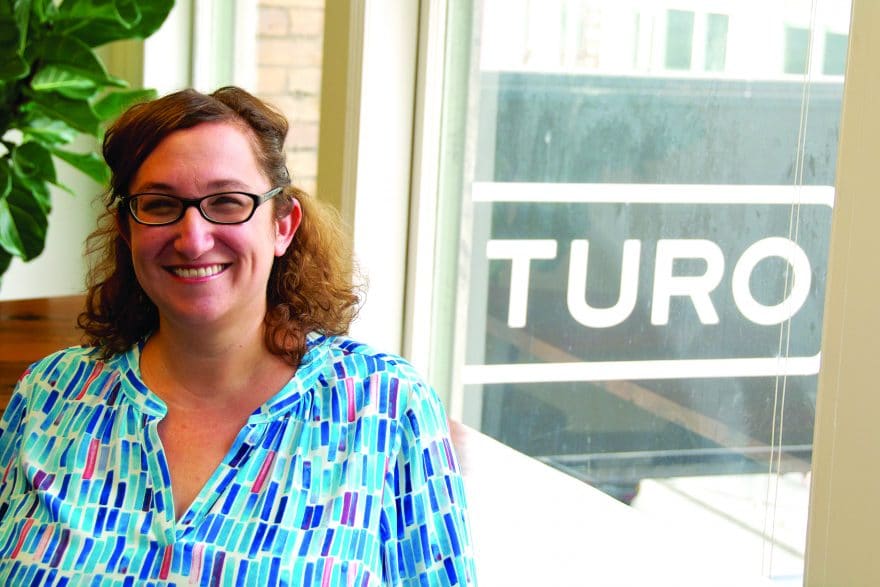 In 2011, with the help of its new CEO, Andre Haddad, RelayRides switched to daily rentals and launched its business across the county. The company rebranded as Turo in 2015 and with more than 800 makes and models available in 4,500 cities across North America and the U.K., in late 2016, it signed up its two-millionth user.

Michelle Fang, vice president and general counsel for the company, joined Turo only a few months before the company rebrand, and as a member of the executive team has helped Turo navigate legal risk, register its new domains and trademarks, launch internationally, and much more,.

“I saw the potential for Turo to create economic opportunity for everyday people. For instance, a person renting out their car on Turo can earn an average of $720 a month, and owners with multiple cars listed earn more than $3,000.”

“I saw the potential for Turo to create economic opportunity for everyday people,” she says. “For instance, a person renting out their car on Turo can earn an average of $720 a month, and owners with multiple cars listed earn more than $3,000.”

Creating these kinds of opportunities is something Fang been passionate about since she started working for online marketplaces in 2006.

Before joining Turo, Fang worked as general counsel and corporate secretary for StubHub, the world’s largest ticket marketplace, and head of global intellectual property and litigation for eBay, the largest marketplace for everything else.

In these roles, Fang says she was inspired by the number of people she saw not only making a little extra money, but sometimes dramatically improving their lives, and the lives of their families, through these online platforms.

The evolution of the sharing economy

An online marketplace is a “website or application where two or more parties come together to buy, sell, share, or trade their time, skill, knowledge, or assets,” says Fang, who theorizes that its evolution can be categorized into four phases.

She says it began with the invention of the internet in the mid-1980s and online “bulletin boards” provided by companies like AOL and CompuServe, which provided the first major online message forums. These virtual bulletin boards were static and primarily noncommercial in nature, but provided a way for its users to communicate and share information.

The second phase flourished with the passing of the Communications Decency Act and the Digital Millennium Copyright Act by Congress in 1996, which among other things, prevented online platforms from being held responsible for the speech and conduct of their users.

Websites like eBay and craigslist took advantage of the commercial opportunities granted in this second phase, but these platforms didn’t always mediate the entire transaction between sellers and buyers, Fang says.

In the third phase, which started in the early-2000s, online marketplaces moved closer to traditional retail with companies like Amazon and StubHub, handling the payment and shipping of products, and also offering customers trust guarantees.

“The current phase started in 2009, with companies like Turo, Airbnb, Thumbtack, Uber and hundreds of others. Evolving consumer expectations require that platforms control more aspects of the transaction and, given its face-to-face nature, be more involved in vetting their community, often through background checks and consumer reports,” Fang says.

When customers rent cars through Turo, they meet the owner(s) of the car in person and together take note of the mileage, the amount of gas in the tank and any existing nicks or dents. Turo also offers a $1 million insurance policy to cover the trip.

At the moment, Turo’s biggest competition comes from traditional car rental companies, but, in Fang’s opinion, the $80 billion global car rental industry is “just begging to be disrupted.”

“The people who use traditional rental cars are not well-served. The product is old, the inventory is uninspired,” she says. “People who use Turo tell us how much they love it and that they’re never going to use traditional rental car again because travelers pay on average 35 percent less, all the while enjoying more choice and a better experience.”

Since joining Turo in 2015, Fang remains the company’s only lawyer.

“Initially, I spent a lot of time making sure we were totally buttoned-up in advance of the rebrand,” she says.

From her experience running eBay’s non-patent intellectual property team, Fang knew that if the company didn’t own “Turo-dot-everything,” people known as “cyber squatters” would register Turo’s domains and hold them for ransom.

Fang says she’s seen companies hand over millions of dollars in order to get domains and trademarks back from squatters. But with the help of Hogan Lovells, an outside, multinational law firm, Fang was able to guide Turo through the process and help successfully launch the new brand in November 2015.

“It felt great adding value to the company right off the bat because I happened to have experience in that area,” she says.

“Canada felt like the next logical step to explore and understand what an international launch would look like for the company. Now we have the technical capabilities to expand further internationally.”

With the assistance of the law firm, Gowling WLG, Turo launched its service in Canada in April 2016. Fang was asked to tackle the company’s new international insurance which also meant a great deal of contract work, not only negotiating with the company’s new insurance partner, Intact, but also for the vendors that would be supporting the company.

Fang says the Canadian launch also pushed Turo to rebuild its website and apps to accommodate different languages, currencies and driving-distance units; until that point it had only ever used English, American dollars and miles.

“Canada felt like the next logical step to explore and understand what an international launch would look like for the company,” Fang says. “Now we have the technical capabilities to expand further internationally, and I was able to provide some strategic counsel to make sure that Turo started off on the right foot and that we weren’t going to have any big challenges when we launched.”

Fang handles everything from work normally assigned to a paralegal to senior legal work, all the while maintaining a leadership and management role as part of the company’s executive team.

“At a startup, you do whatever needs to be done. I probably spend as much time working on non-legal things, such as helping drive and grow the business as well as impacting the company’s culture, as I do on legal areas, and that’s very fulfilling to me because I love being a part of setting and executing the strategy for the company,” she says.

In her first month at Turo, Fang launched an affinity group for the female employees, and more recently has helped to launch other affinity groups that celebrate and support the diversity of the company. She also worked to create a paid-volunteer-time-off program for employees to volunteer for causes they care about.

“It’s really important to me that we have an inclusive and positive work place,” she says. “We spend so much time at work every day so I want to make sure Turo is a place where people are happy to spend time and want to stay and grow their careers with the company.”