In the spring of 2019 operations at the Philly Shipyard were looking bleak. A lack of contracts had idled production and the workforce had been slashed from 1,200 down to around 80, says Dean Grabelle.

But Grabelle had hope. After laboring over proposals for months as Philly Shipyard’s senior vice president and general counsel, word finally came in April 2020 the shipyard had won a contract to build up to five ships valued at $1.5 billion over the next five years. He was thrilled to begin calling people back to work. 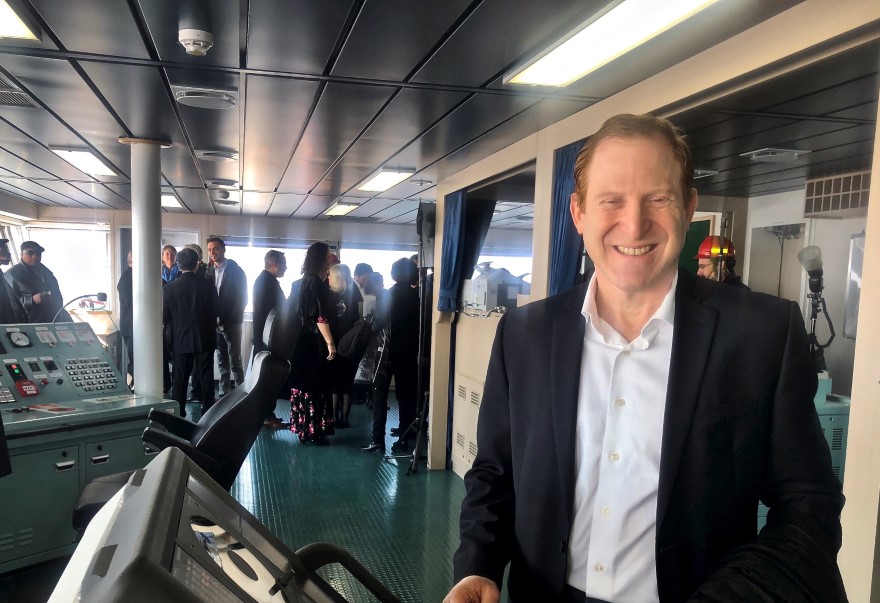 The contract—the company’s first for a government shipbuilding program—was a breakthrough in its “going gray” strategy. The term—coined because most Navy ships are painted gray—means the commercial shipyard is diversifying its business by also pursuing government contracts. It’s adding repair, maintenance, overhaul and conversion work to its list of potential services, too.

“The past few years have been a roller coaster of ups and downs, but we fought our way through,” says Grabelle. “It’s exciting to see some good news for a change, especially during COVID-19.”

Development at the docks

Grabelle says a bustling shipyard is quite a sight to behold, with large blocks of steel swinging from gigantic cranes before being lowered into place to construct some of the largest ocean-going vessels ever made in the U.S. The job site resembles the largest Erector set in the world—and he can watch it all from his office window. 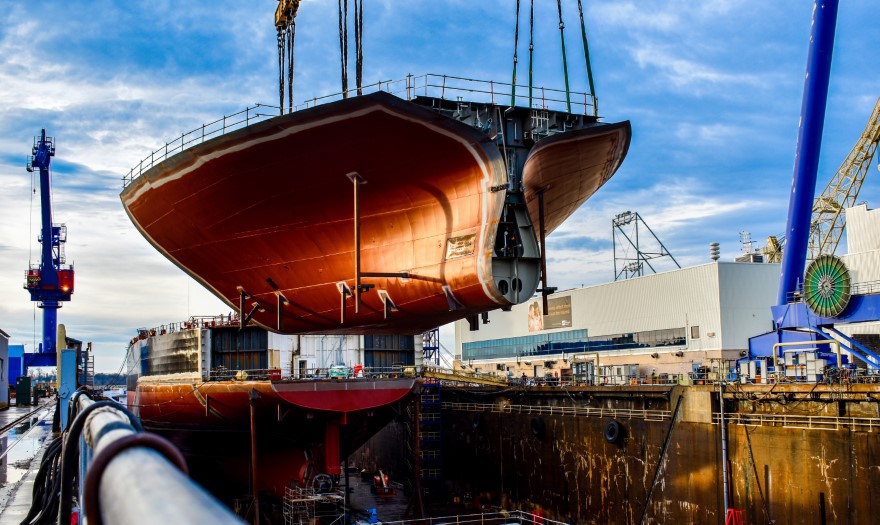 That’s just what he likes to see at Philly Shipyard, which was founded in 1997 as part of a public-private partnership between the city of Philadelphia, the Commonwealth of Pennsylvania, the U.S. government and Kvaerner Shipbuilding of Norway to revitalize the old Philadelphia Navy Yard. By 2005, the shipyard became part of Aker American Shipping, and following a spinoff in 2007 and rebranding in 2015, today Philly Shipyard is listed on the Oslo Stock Exchange as PHLY.

Rebuilt by 2000, the state-of-the-art shipyard complex has two dry docks, both longer than three football fields—and massive cranes designed for commercial shipbuilding—which support work for the Jones Act market. Ships built under this 1920 law—akin to earning the moniker of “Made in America”—are used primarily to ship goods between U.S. ports to support domestic interests.

In addition, the Jones Act also safeguards national security by ensuring a shipbuilding industrial base. The shipyard stands ready to fulfill defense construction orders with domestically made ships. 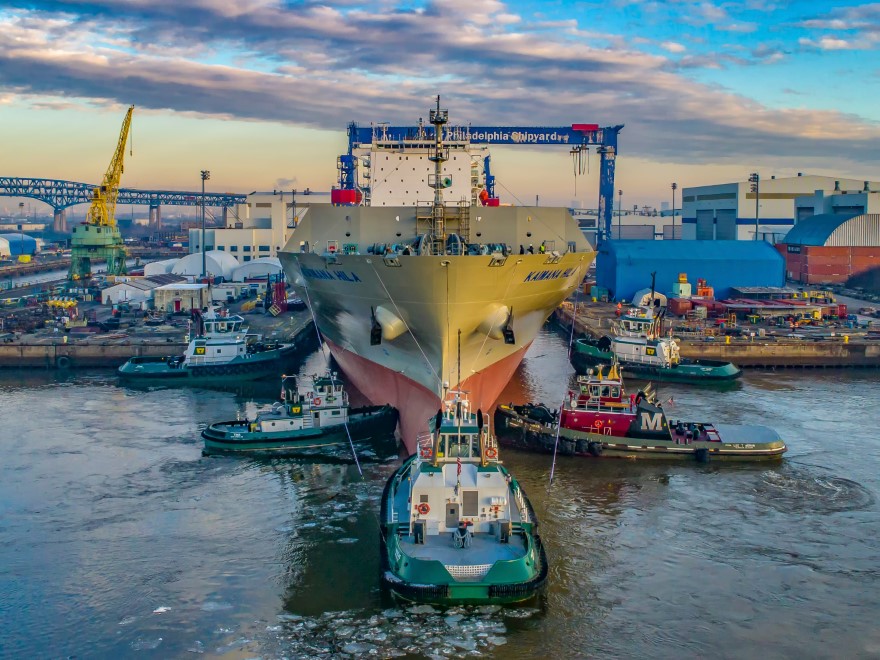 “These projects have taken a great deal of complex contract negotiation with the ultimate goal of keeping our employees working steadily, while offering the government a new, high-quality, cost-effective solution to meet its ship program needs,” Grabelle says. “Winning a major contract is a giant step in the shipyard’s diversification strategy, enabling us to build our workforce once again to full strength.”

Topping the production list are four ships to be built for the New York, Massachusetts, Maine and Texas Maritime academies. The order was part of the April 8 contract for the government’s National Security Multi-Mission Vessel program. The hope is that all five ships will be ordered, with deliveries extending into 2025.

The infusion means the shipyard is busy hiring, reinvigorating its apprentice programs and training its workforce. It is also participating in design industry studies for other government shipbuilding programs.

“We are in ramp-up mode once again,” Grabelle says.

A former lawyer colleague of Grabelle’s who encouraged him to take the job in 2008 told him work at the shipyard would be interesting and exciting—advice that was on the mark.

Grabelle was working at the Philadelphia office of national law firm Faegre Drinker when he got the opportunity to represent Philly Shipyard as outside counsel. While he says he didn’t have maritime or government contract experience, he had close to 12 years’ experience in corporate law with a focus on M&A, business counseling, commercial lending, private equity and corporate finance—all valuable tools for the shipyard environment. He was also equipped with a degree in economics and public policy studies from Duke University and a JD from the University of Pennsylvania Carey Law School. 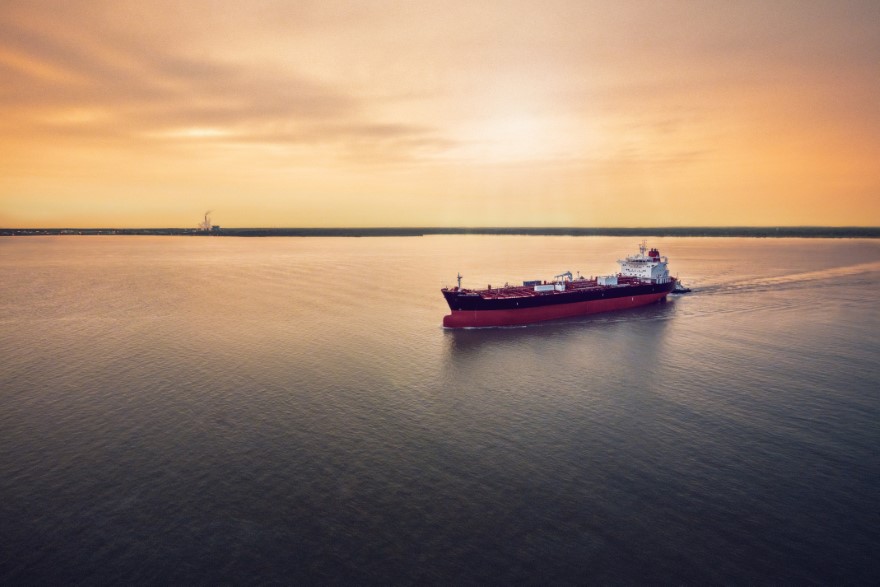 “The idea of working at a shipyard and being part of a team building these big ships was enticing,” says Grabelle. “These are not little boats; they are massive! The opportunity fell in my lap and I went for it.”

Once on board, Grabelle negotiated with existing customers and lenders to restructure the shipyard’s contracts and financing for a series of tankers. He also created the legal groundwork for future orders, including 16 more tankers and container vessels for the likes of Exxon Mobil Corp. and Matson. Additionally, Grabelle helped launch an innovative program for the company to invest in eight of these tankers and then later sell those stakes.

“As the sole in-house lawyer at a production facility with over 1,000 people, I was immediately thrown into the thick of things and it was an immediate validation I had made the right choice,” he says. 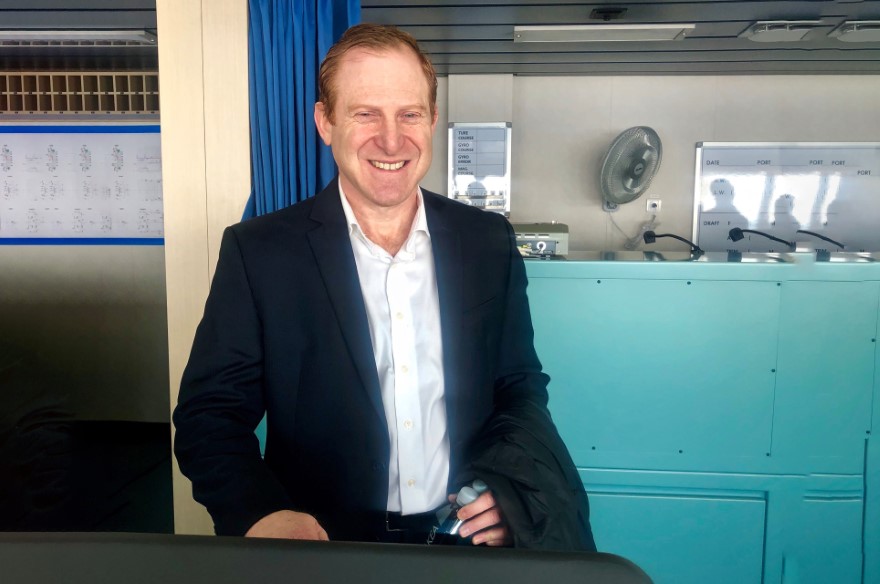 Now part of the senior management team, he says “I enjoy the diversity of the day-to-day issues that arise and being involved with the business at all levels as well as shaping the strategic vision we have for the company.”

But perhaps there’s nothing better than putting on a hardhat, safety goggles and steel-toed shoes to walk the yard and meet with the talented people building these enormous ships. His favorite event is the ship-naming ceremonies because they represent and celebrate the culmination of everyone’s hard work.

“Being a behind-the-scenes part of these projects that support a community, individual families and our naval operations is extremely gratifying,” Grabelle says. “There’s such immense pride in our skilled workforce in the delivery of these world-class ships, there’s nothing like it.” 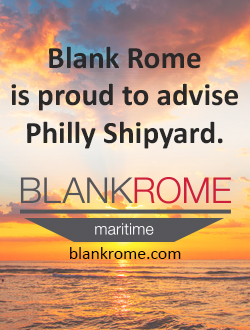 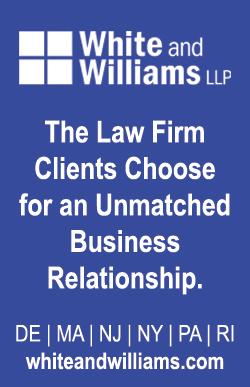