Bringing businesses and people together across the Americas

Founded in the United Kingdom in 1918, what is now UBM plc is a business-to-business event planning and media company that works to connect businesses with targeted audiences through live events, press releases and other channels of communication.

As head of legal for UBM Americas Inc. UBM plc’s business in North and South America, Michael Bernstein is involved in every aspect of the company, providing expert legal advice and forecasting any problems that ight arise. With a background in employment law, Bernstein is a particularly well-suited to his role at UBM, which employs more than 1,100 people between its offices in the U.S., Canada, Mexico and Brazil.

Advancing in the market

Bernstein joined the company in late 2014 when UBM acquired Advanstar Communications Inc. (Advanstar) for $972 million dollars. Before his role as vice president and general counsel at Advanstar, Bernstein served in a similar role at The Upper Deck Company (Upper Deck), a sports and entertainment trading card and memorabilia company based in Carlsbad, California.

“I had been in-house counsel with Upper Deck for eight years and was just looking for growth in my career with a larger company,” says Michael Bernstein. “Upper Deck was privately held with 100% of the company owned by one person whereas Advanstar was privately held by three private equity companies. The opportunity to interface with an active board comprised of private equity groups really intrigued me.” 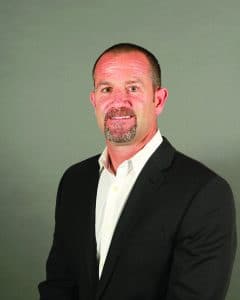 Bernstein initially took the interview with Advanstar as a warmup for future career moves because at the time Bernstein and his family lived in San Diego and he had no interest in moving to Los Angeles, where Advanstar’s west coast operations were based. However, after meeting with several of Advanstar’s executives including Advanstar’s CEO Joe Loggia and learning more about the company, Bernstein became fascinated by the its unique mission and structure. “I knew nothing about trade shows. I never really thought about how trade shows are run or the size of the business that it is, but through several interviews I became intrigued,” he says.

The decision to move to Advanstar was partially influenced by Bernstein’s own forecasting of the company’s future. “I knew there would be an opportunity for a sale of the company because private equity firms don’t hold on to companies forever. Advanstar was active in the merger and acquisition [M&A] space and I was very interested in having an opportunity to be more involved in M&A deals as I enjoyed my previous experience and was looking to get more experience doing deals,” he says.

Putting his experience in employment law to work, Bernstein spent a portion of his time at Advanstar working with the human resources department to tackle employment issues the company was facing. These issues were not any different than the issues that any company the size of Advanstar faced on a day to day basis. “Prior to my arrival, Advanstar would have consulted with outside counsel, but because of my background in employment law, we were able to keep these issues in-house without incurring the expense of external counsel,” he says.

When Advanstar was acquired by UBM at the end of 2014, the scale of Bernstein’s job changed, but not his basic duties. “I work on many different aspects of the business. I deal with different types of commercial agreements. I am always updating and refining our agreements and I manage outside litigation,” he says. “I have two attorneys and a senior paralegal who report directly to me. Although we all review different types of commercial agreements, each of us has a certain specialty, which helps to strengthen our role within the organization. Josh Blank focuses on intellectual property matters (i.e. trademarks, copyrights, etc.), Emily Chu focuses her attention on M&A deals and Lee Schauer focuses his attention on agreements related to the actual trade show events.”

Following the acquisition of Advanstar by UBM, Bernstein focused much of his time integrating the operations of UBM and Advanstar into one seamless outfit. This involved ample human resources work, including the creation of an entirely new employee handbook.

The long road to UBM Americas

Starting out in the legal field primarily as a private practice plaintiff’s lawyer focusing on employment litigation issues, Bernstein often found himself going up against large companies. “I was seeing all these silly things these big companies were doing, or not doing, to get themselves in trouble and I was always thinking, if I worked for these companies I could help them stay out of trouble,” he says.

After consulting a number of his peers, Bernstein decided he was ready for a change of direction. “I didn’t love litigation and the court process; it seemed like a lot of wasted time, sometimes sitting in court and waiting all day, and I’m not the type of person who likes to sit around wasting time,” says Bernstein.

While he knew what he wanted his next step to be, Bernstein initially had a difficult time breaking into the world of in-house counsel. “Most companies hiring an in-house attorney were not looking for a plaintiffs’ attorney but attorneys who worked for big defense firms. I thought I had a better view coming from the plaintiff side, but the companies didn’t see it that way,” he says.

Bernstein eventually joined Upper Deck, where he worked from 2004 to 2012 before joining Advanstar. He quickly found that he relished the role of in-house counsel, where he found himself part of a team working toward a common goal. “Being able to interact with everyone involved in the business process, like those in creative, marketing and operations, in order to figure out the best way to create a more successful company, is way more satisfying and personally rewarding,” he says.

While not every company the size of UBM has its own in-house legal team, Bernstein sees his department as an invaluable resource to the company. “Having an IP specialist, an M&A specialist, an event specialist and then me as a generalist allows us to be relatively lean but knowledgeable in the right places. We are spending less on external counsel, even once you factor in salaries,” Bernstein says.

Bernstein has also been able to turn the legal department into something of a profit center for UBM. When Josh Blank, UBM’s internal IP expert, realized a patent was about to expire, Josh quickly took the initiative to set the wheels in motion for UBM to license the patent instead of letting the patent lapse. “The business folks were willing to let the patent expire, but thankfully Josh saw some value and now it could potentially bring in some significant revenue to the business,” says Bernstein.

One of Bernstein’s biggest pet peeves and one he is working to remedy is having legal issues arrive at his desk in an advanced stage. “It is important for the company to involve the legal group at the beginning and that is happening more and more as the legal group becomes more involved with the business decisions of the company,” he says.

A former post-college ski bum, Bernstein has traded the snow of the Colorado Rockies for the surf of Southern California and can often be found riding waves off the beaches of Malibu with his 12- and 9-year-old in tow. “There is no greater pleasure in life than getting to surf and share that experience with my kids in the water,” he says.

A strong background in employment law and a commitment to bringing added value and expertise to UBM Americas Inc. will ensure that Michael Bernstein continues to excel in his role as head of legal for the business-to-business event planning and media company.