It’s pretty simple. One violation of FINSA’s new anti-corruption policy and you are out. Forever.

Bribery. Robbery. Drug trafficking. There is no shortage of crime in the countries where FINSA operates, and technology is allowing people to become more creative in their methods of deception. But as political instability rises and democracies crumble, countries and companies are developing strong anti-corruption programs to stem the tide. 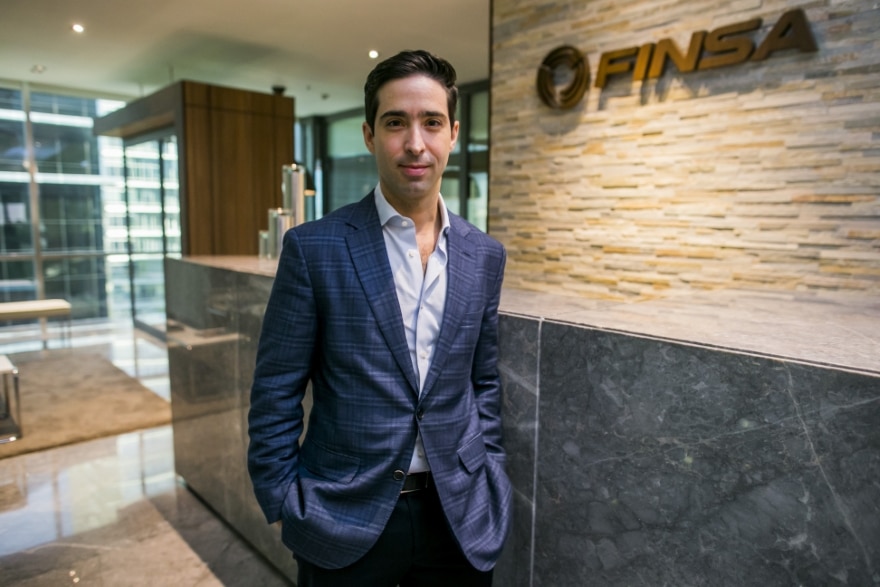 Mexico is no exception, and the country is by no means the worst offender. In the wake of last year’s national election south of the border, voters demanded political reform and a crackdown on corruption.

To that end, Mexico’s leading industrial real estate developer FINSA got on board to bolster national and international initiatives. Led by their attorney Hans Hutterer and his team, FINSA immersed themselves in an intensive project to update existing anti-corruption policies by flexing new regulatory muscle that not only complies with laws in Mexico, but with business partners overseas as well.

“We have zero tolerance for any corruption in our supply chain,” Hutterer says of the policies, which are expected to be distributed this year. “Any supplier who is not acting in an ethical manner will not be providing services to our company. A violator will be cut out completely and will not be able to do business with us in the future.”

How bad is bad?

Hutterer says all countries suffer from the cultural problem of corruption, which is getting more attention these days than in the past in part because of social media.

But just how bad is bad?

One need only look back to a 2012 New York Times investigative report and other public records highlighting corruption problems in Mexico with transnational companies. It was alleged that bribes were to be paid via local fixers to officials throughout the country to obtain construction permits, information and other favors. Investigators found credible evidence back then that Mexican and American laws had been broken.

But what about now?

Berlin-based Transparency International (TI) developed the Corruption Perceptions Index. By working together with governments and businesses, TI is seeking to stop the abuse of power and secret deals. The index, which ranks 180 countries by their perceived levels of public sector corruption according to experts and businesspeople, uses a scale of 0 to 100, where 0 is highly corrupt and 100 is very clean. More than two-thirds of countries scored below 50 on the CPI in 2018, with an average score of just 43. Mexico ranked 138 on the list with a score of 28.

Despite the national statistics, Hutterer says FINSA, from its base in Monterrey, has always been a solid corporate citizen with anti-corruption policies already in place. FINSA has also created an Ethics Committee, of which Hutterer is a member, to oversee and implement these policies.

There is always so much at stake to protect. 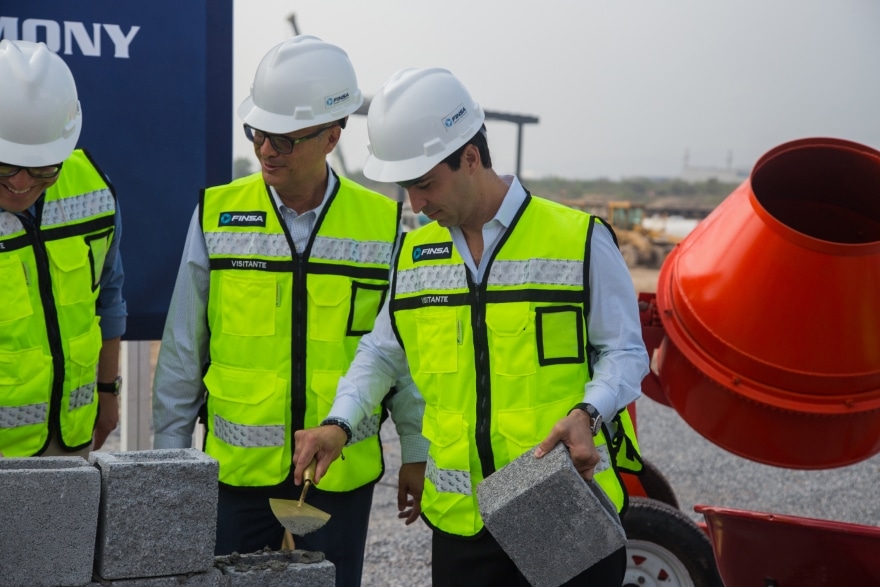 FINSA, the real estate titan, had an aggregate of $2 billion to manage when Hutterer joined the company almost 17 years ago. In 2012 and 2015 the firm dispersed their first two CKDs (development capital certificates) totaling $600 million in Mexico’s version of a stock market—although they are not public. The company, founded in 1977, has 59 locations, has developed 126 million square feet of space since its inception, manages 26 million square feet of leased spaces and has developed 26 industrial parks in Mexico, for starters.

In protecting the company, Hutterer leaves nothing to chance.

Paying close attention to issues surrounding money laundering in particular—and as part of the anti-corruption initiative—his team is creating manuals and guides to help suppliers avoid pitfalls of any kind, which will also help avoid hefty fines.

“It’s complicated. We work with clients, suppliers, lenders and players while keeping pace with new regulations. In corporations it is key to identify each player’s strength and make sure they do their part to comply, because if one part fails the whole system breaks down,” he says.

Hutterer continued, “Obviously what has been happening worldwide has impacted the way we see things and how our clients see things. Then and now we need a strong policy with consequences. The liability is huge and we have to take care of our reputation by protecting it.”

Not his first rodeo

Literally organizing a billion-dollar book of business and providing structure to a stable full of external lawyers was what a 24-year-old Hutterer walked into back in Monterrey years ago.

Right out of the gate, FINSA needed a system and a direction. They tapped Hutterer, who had just graduated with special honors from law school, ambitious and focused, to bring things in line. 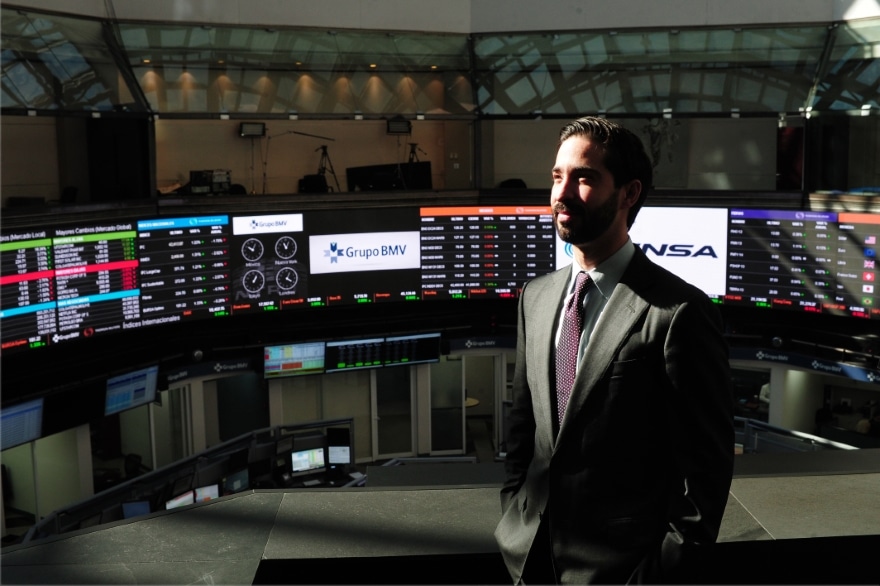 Hutterer’s first project was designing the firm’s legal department. At his direction two divisions were created: one focused on real estate leasing and acquisitions; and a second regulatory branch focused on project finance, compliance, and corporate matters. His team of eight divides and conquers the responsibilities to keep pace with ever-changing requirements and regulations.

Stressing total communication and respect for people’s time, Hutterer says he urged his team then (and now) to keep both a proactive and practical mindset.

Successful milestones included the incorporation of joint ventures with the AIG group in 2002; GE Capital in 2005; and Walton Street Capital Fund in Chicago in 2010.

As the first lawyer in his family, and one who has achieved so much at a young age, he says he enjoys the variety of the work FINSA provides.

“I was—and still am—very motivated,” says Hutterer. “I started it from scratch and strongly believe it is a very solid department now. I’ve been here every day since then.”

He’s been piloting the company’s progress ever since he walked through the door, one title at a time.

In short order he was named vice president, general counsel and now holds a special seat as a member of FINSA’s Board of Directors and Investment Committees. Not an easy task at FINSA, which manages one of the largest industrial development portfolios in Latin America. That book of business has prolific ties and close relationships with car manufacturers such as Nissan, General Motors, Audi and Volkswagen. Hutterer may have cut his teeth with real estate transactions, he also obtained an MBA in Mexico, complemented by postgraduate studies at Harvard, gaining considerable experience in management and financial strategies. Which is why he is now sitting at the big table.

“They wanted me to be involved in decisions because they thought I could add value,” Hutterer says. “I knew I could. And I think I did.” 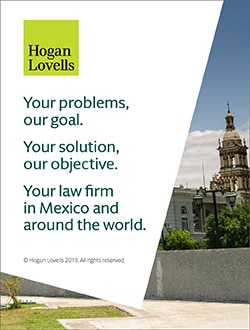 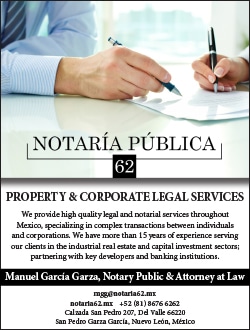 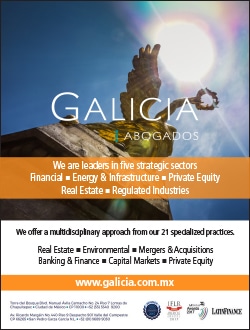