More than any contract or services agreement, the most important pact Alison Wisniewski has ever been involved in was the one she made with herself. If she scored at least a 160 on the LSATs, she would leave her paralegal job, along with the acting career she’d dreamed of since childhood and go to law school.

Like any great deal, it’s one that worked out well for all involved.

“I was never very good at standardized testing, so I had this sort of built-in excuse if I didn’t get the score I wanted,” Wisniewski recalls. “But when I got the results back, I was genuinely excited—which surprised me. I thought, ‘Maybe I really do want to go. Maybe this is what I’m supposed to do.’”

Call it a calling

After honing her legal chops in private practice, and a stint in the asset management department of Crown Northcorp, in 2010 Wisniewski joined Epiq, which provides legal services—including operational streamlining, court reporting, eDiscovery, claims administration and more—to clients of all sizes and sectors around the globe.

Hired initially to provide counsel to Epiq’s New York-based eDiscovery sales team, Wisniewski has since become a steadfast voice within the company, handling everything from internal policies and procedures to compliance with the Health Insurance Portability and Accountability Act (better known as HIPAA). 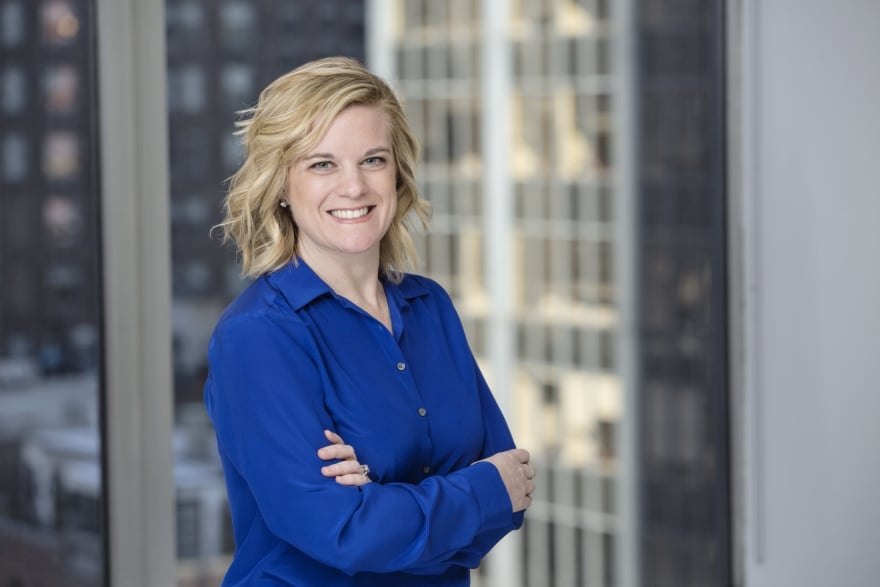 Still, Wisniewski remains firmly tied to her legal roots, particularly when it comes to negotiating Epiq service agreements. An ardent believer in the “four corners” approach to contracting—where simple language is king—Wisniewski says it’s imperative that both sides always negotiate in good faith.

“On the one hand, both sides are trying to capture the risk profile of the other organization, figuring out how and when each side should be paid, protecting their proprietary assets,” Wisniewski explains. “But you can do all that in a way that’s honest and accurate and fosters trusts with the client. That way, if a relationship does go sour, you know that the contract you put in place spells it all out.”

The reason for the extra diligence, Wisniewski says, has to do with the petabytes of sensitive data—forensic information, court filings, regulatory filings, personal information—housed within Epiq platforms. (For the non-technical readers, a petabyte is a million gigabytes, or “a lot.”)

In 2018, Wisniewski worked overtime to ensure the company complied with the European Union’s General Data Protection Regulation (GDPR), a law governing how personal data—everything from names and social security numbers to IP addresses and cookie data—can be processed and disseminated.

Given that European companies are a swath of the Epiq client base, Wisniewski was responsible for updating Epiq consent policies ahead of the law’s May 2018 implementation, instituting data safeguards for all new products and working with the IT department to ensure the company’s internal sales and marketing systems were secure.

What’s more, the new law has impacted how Wisniewski and her team create the risk profiles so necessary to the broader contracting process.

“The question we always have to ask is: What kind of liability cap can we accept?” Wisniewski says, referring to acceptable likelihood one entity may be sued in the event of a contract breach. “It’s changed the contracting dynamic quite a bit.”

It also may have contributed to the company’s status as one of Inc. Magazine’s fastest growing companies in 2018—a good challenge, but a challenge, nevertheless.

Whenever the legal department finds itself needing extra reinforcements, Bryan Cave Leighton Paisner (BCLP), a global practice specializing in commercial services, is often the first firm called to the fray, just as it has been since 1998, back when Epiq was still called Document Technologies LLC. 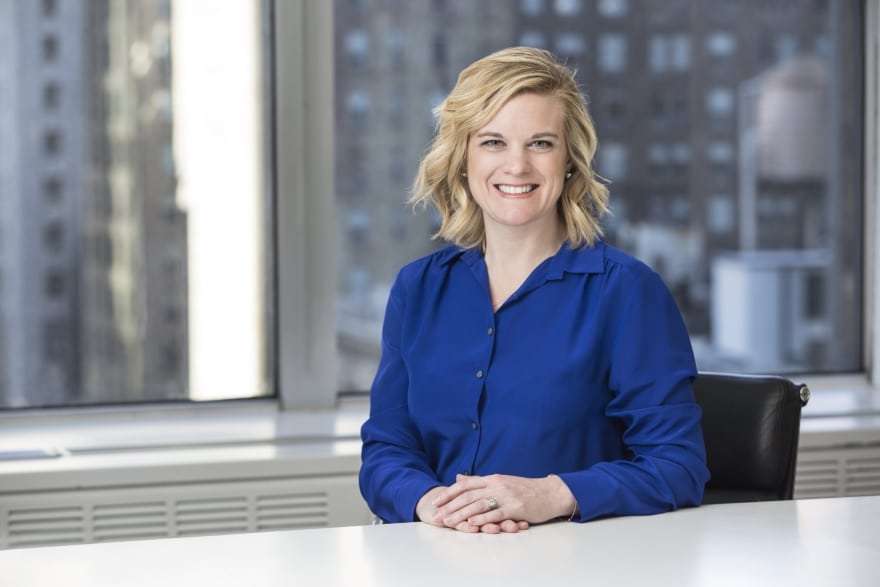 “One thing that’s held true for decades is that our relationship with Alison and Epiq is a true partnership,” says Lou Spelios, a BCLP partner who’s worked with Epiq for the better part of 20 years. “It’s clear why they’ve been so good at bringing on and keeping their clients—because every relationship is so important to them. They all understand their industry very well, and Alison epitomizes that deep and focused expertise.”

Indeed, between helping to oversee a growing array of proprietary software at Epiq to spearheading the company’s anti-bribery efforts, it’s an expertise that continues to evolve—much like Wisniewski herself.

The daughter of a New York patent attorney, Wisniewski harbored zero designs on following in her father’s footsteps, she heeded a slightly more creative calling.

“I loved the theater growing up,” recalls Wisniewski, whose most indelible role was playing the lead in the Broadway classic Kiss Me Kate as a high-school junior.

After graduating from Northwestern University in 1999, Wisniewski returned to New York, auditioning for parts by day and working as a waitress at night. In need of steadier work, she took a job as a paralegal at Sidley Austin LLP, where she quickly became intrigued by the business side of law—and the contracting process particularly.

Having made a promise to herself that if she scored a 160 on the LSATs—10 points above the national average—she would go to law school, Wisniewski enrolled at Fordham University Law School in 2001.

J.D. in hand, Wisniewski returned to Sidley Austin, this time as an associate specializing in corporate mergers and acquisitions and private equity. In 2007, she moved to Kramer Levin Naftalis & Frankel, where her purview included filings for the Securities and Exchange Commission and myriad other corporate documents.

Her first foray in-house came in 2009, when Wisniewski joined the asset management department of Crown Northcorp, a financial and real estate services company. The following year, she was hired by Epiq to help shepherd the company’s New York-based sales team.

“To thrive in a role like this, I think you have to be receptive to new ideas,” Wisniewski says about her open door policy. “It’s important to be able to shift between viewpoints and see all sides of an issue.”

Turns out, that knack for learning different roles is alive and well. 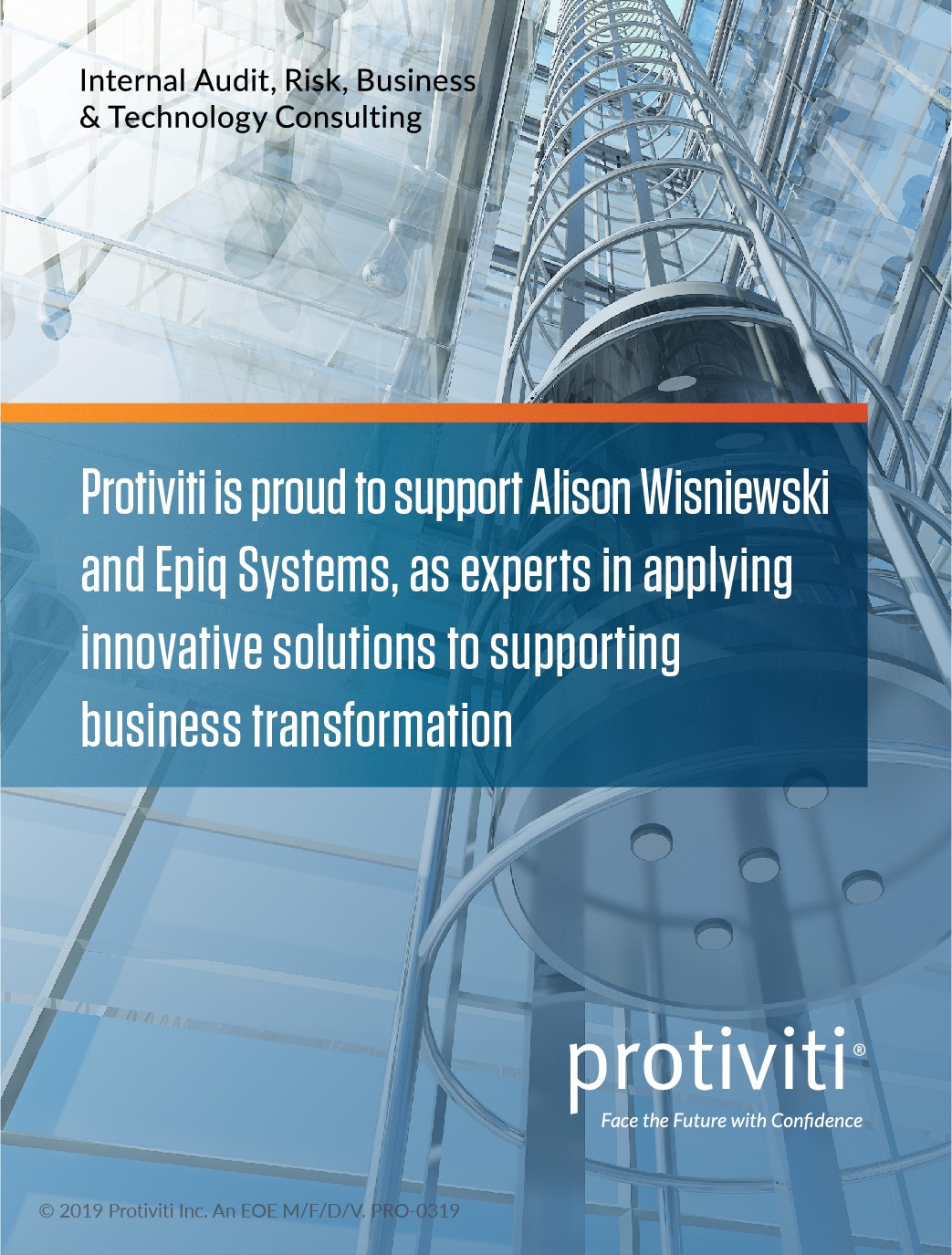 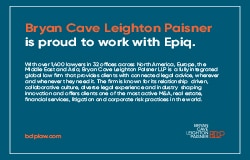