A mission for which he can align

He can’t say for certain whether a Teleflex device prevented his son from losing an arm a few years ago, but it at least seems probable.

As Jonathan Hollinger explains, his then 5-year-old had suffered a compound fracture from falling off a slide while in kindergarten. When the emergency room doctor couldn’t detect a pulse in the affected wrist, the boy was sent to the Children’s Hospital of Philadelphia where a pediatric surgeon told the Hollingers he’d reset the bones with pins and screws.

“We were told that 90 percent of the time it relieves pressure on the artery, and the blood flow returns to the hand,” Hollinger says. “The doctor said the procedure usually takes an hour.” 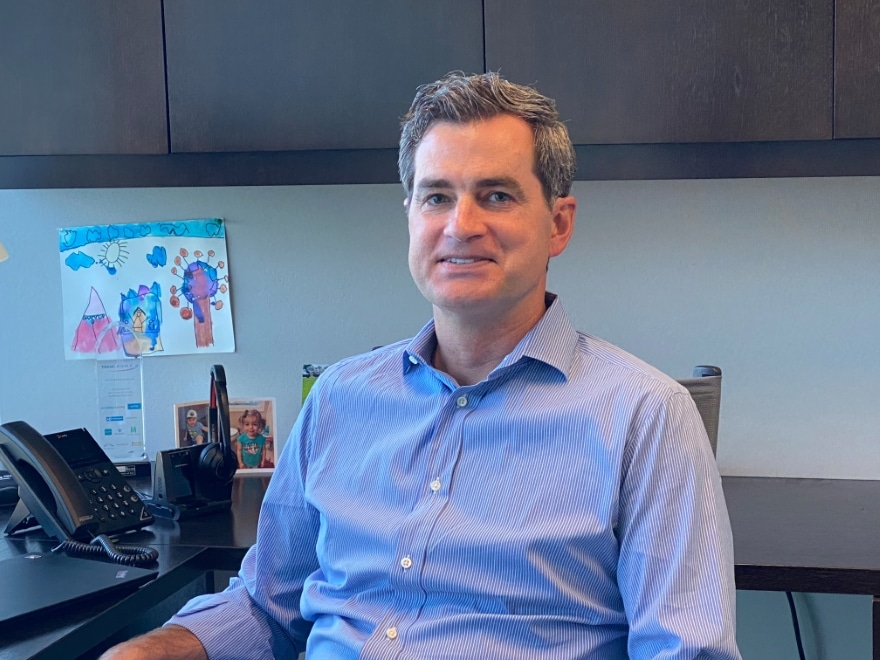 Three hours later, there was still no blood flow. A vascular surgeon and specialty staff were summoned. As young parents, the Hollingers were stressed to the max.

Aided by a sophisticated vascular access tool that at least was similar to what’s in the Teleflex portfolio, the surgeon transplanted a vein from the boy’s ankle to his arm and restored normal flow. The boy, now 8, has regained full use of that arm.

And his dad? An accomplished lawyer, he became Teleflex’s associate general counsel last July, joining the specialty medical technologies company after over six years in a similar role at Teva Pharmaceuticals, also in the Philadelphia area. Well-versed in transactional law, he’s keen on helping to grow the company.

Over the past decade, Teleflex has experienced significant growth through mergers and acquisitions and continues to remain active on this front.

“We’re a serial acquirer,” the genial Hollinger tells Vanguard in April from headquarters in Wayne, Pennsylvania. “We’re always looking for the next opportunity that will deliver value for our stockholders and advance our purpose of helping to improve the healthy and quality of people’s lives. We mine the market for opportunities that will benefit our patients and serve undermet needs.”

The past year, however, it’s been more a case of Teleflex getting on base and advancing. With Hollinger handling M&A and real estate, the company closed a deal in early summer for a late-stage interventional vascular device company.

More recently, Teleflex has signed a significant deal for a bariatric stapling device that’s expected to close before year’s end. He’s also negotiated a facility acquisition in Ireland and a site divesture in North Carolina. 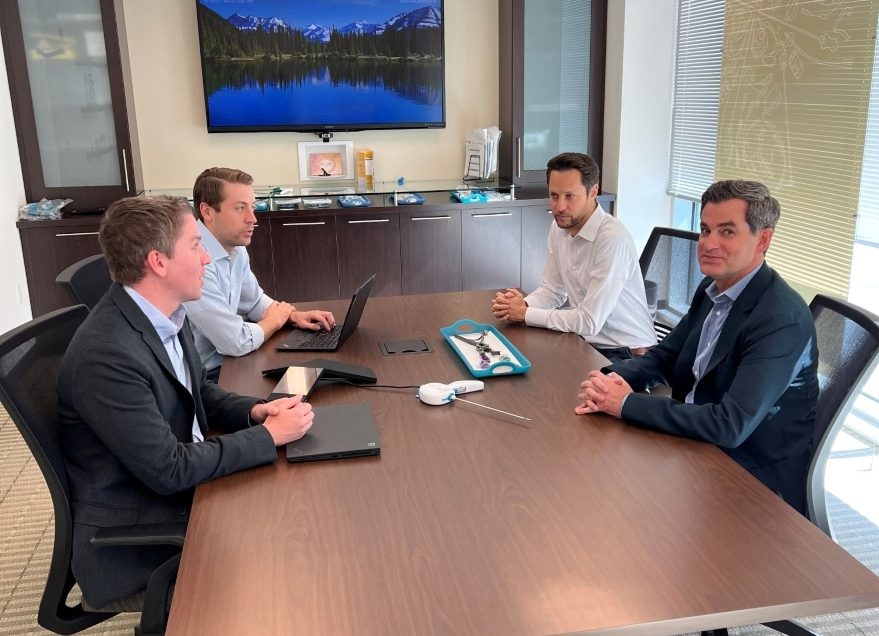 As part of its “go direct” strategy, Teleflex has continued moving from third-party distributors to a direct sales force in select markets outside the U.S. Most recently, Hollinger assisted in overseeing the negotiation of go direct transactions in South America and South Africa.

“You can be confident that we are very diligent and making sure all our foreign representatives are aware of the various restrictions on what’s allowable,” he says. “As a public company we have to operate in good faith and in compliance with laws.”

And he’ll keep reviewing the latest prospects for M&A, while coordinating with Teleflex’s internal functions to spot issues during due diligence. He’ll also allocate risk appropriately between the target and Teleflex as the acquirer in the definitive transaction agreements. Sometimes the smartest deal is the one that isn’t made, says Hollinger, who is not afraid to recommend against a “hairy goat” if the risk can’t be properly mitigated.

“You have to make sure an acquisition makes strategic and financial sense and is a good fit,” he says. “But we’re always on the lookout, especially of the variety that could improve patient care and move the needle from a growth perspective for our company commercially.”

It seems a steady enough course now, with the Teleflex line including anesthesia, emergency medicine, surgical, interventional cardiology and radiology, urology, interventional urology and vascular access. But with something new always in the medical technologies pipeline, Teleflex stays in growth mode, with M&A continuing to be a key focus area.

Dealmaker in his DNA

It’s also the method that Hollinger has practiced for much of his career. A 2005 University of California, Davis, School of Law graduate, he sharpened his M&A, public securities and venture capital credentials with three Philadelphia area firms, relishing the interaction with the brainy and farsighted types at startups and being fairly well-versed in their vernacular.

Time was when Hollinger might have been one of them, the Harvard University undergrad and varsity soccer player always fascinated by the life sciences. He’ll acknowledge some regret over not pursuing a scientific career but says he’s largely satisfied that desire as a lawyer, particularly in his two in-house roles.

But first came the firms, with Hollinger an associate with Morgan, Lewis & Bockius; SorinRand (now part of McCarter & English); and Montgomery McCracken Walker & Rhoads. Wanting to be part of a process from start to finish, in 2015 Hollinger became senior director and executive counsel with Teva Pharmaceuticals.

A valuable experience, he says of the next six years, but the company hadn’t been growing through M&A. Hollinger wanting to get back to what he enjoyed most, he moved to Teleflex, which he says is the better long-term fit. 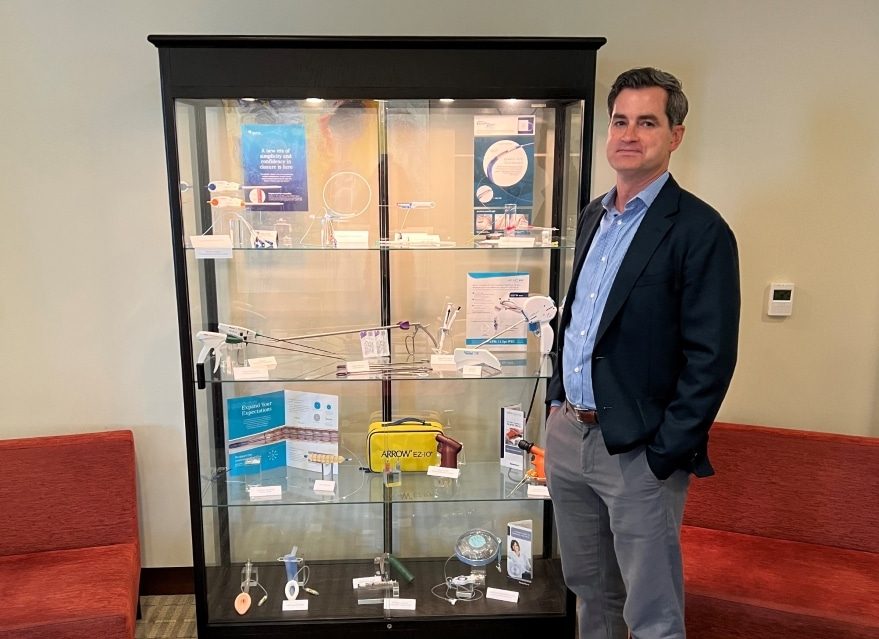 “I just love my role here,” he says. “It’s a dynamic company that’s always looking for new technologies to improve its suite of medical offerings. My Teva skills have translated nicely.”

Home life also is satisfying with his wife, Victoria Hollinger, whom he met at Morgan, Lewis & Bockius and is now an assistant general counsel at FMC Corp., a Philadelphia-headquartered chemical manufacturer. They also have a 5-year-old daughter.

“It’s definitely a co-parenting lawyer family which creates its own stresses,” he says with a laugh. “But it’s great. We understand each other’s lifestyles and bounce ideas off each other. It’s great to have her as a sounding board.”

He also enjoys snowboarding with her, the 40something Hollinger risking his surgically repaired knees to learn the alpine sport. So far, it’s mostly been on Pennsylvania’s relatively unforgiving slopes, but he’s looking forward to trying his board in Colorado’s deep powder next year. That might take some shrewd time management, what with Teleflex looking to expand its catalogue, but he’s getting the M&A process down to, well, a science. 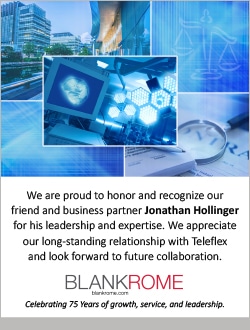