Bringing business and economic experience to the health care market

As general counsel for Doylestown Hospital, John Reiss is responsible for helping the award-winning, 232-bed facility fulfill its mission of providing a responsive healing environment for patients and families while improving quality of life and health outcomes across the community.

Founded in 1923, the hospital employs more than 420 physicians, dentists and other medical specialists in addition to a staff of over 2,100. Doylestown specializes in a wide range of clinical focuses, including cardiology and cardiothoracic surgery, emergency medicine, gastroenterology, diagnostic and interventional radiology, maternal-child health, oncology, robotic surgery and many more. 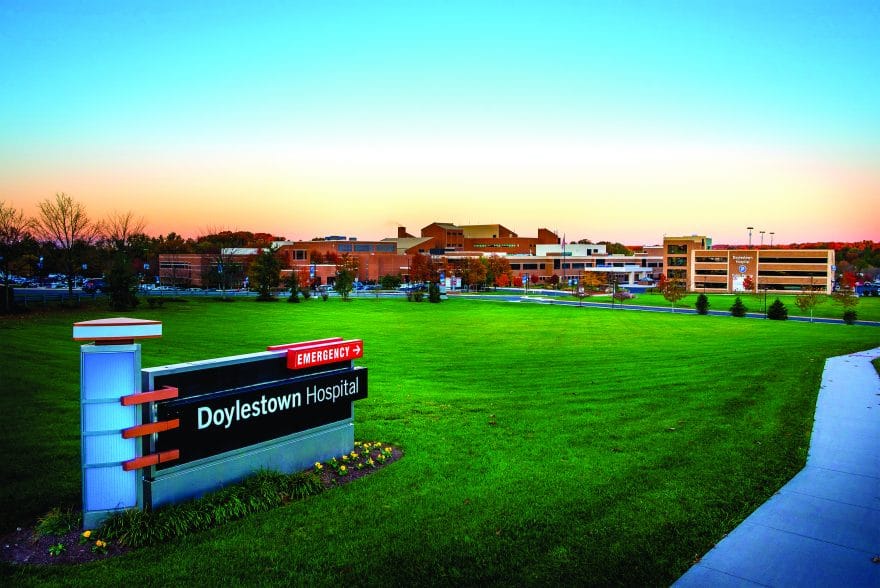 Reiss joined the team at Doylestown as general counsel and vice president in 2013 after 25 years of working with the health care provider as an outside counsel. With more than 40 years of health care-related experience in both the public and private sectors, Reiss brings a wealth of institutional knowledge to his role at Doylestown.

While many of his peers might have longingly eyed retirement after a four decade career, Reiss was eager to join the hospital during one of the most interesting periods in the history of the American health care system.

“The Affordable Care Act has had an effect, but not as much of an impact as employers’ and payer’s interest in changing things. I thought it would put pressure on hospitals and create a very interesting opportunity to try new things until the end of my career,” says Reiss. “Here I’m playing a role helping this institution respond to those market forces.”

The intersection of health care and economics is nothing new for Reiss. Before graduating from Temple University Law School in 1977, Reiss earned a Ph.D. in economics from Washington University. He began his career in health care with the State of New Jersey as assistant health commissioner, where he helped to design and implement the use of diagnosis-related groups (DRG) for medical reimbursement, as well as tackling duties related to health planning including managing the certificate of need program, statistics, and hospital and nursing home reimbursement.

“I still do legal work, but that work is heavily oriented toward the businesses’ objectives. I get involved in business decisions both from the point of view of legal issues and what the market looks like and how we fit into it,” says Reiss.

Entering the legal field later on in life, Reiss joined Dechert, Price & Rhoads where he served as chair of the firm’s health law practice group. It was in this role that Reiss first came to work with Doylestown as an outside counsel. After 11 years, Reiss left the firm but retained nearly all of his clients, including hospitals, pharmaceutical companies and medical device manufacturers.

The attorney then joined Philadelphia’s Saul Ewing where he would spend 20 years. As a health law transactional and regulatory practice attorney, Reiss chaired the firm’s health law practice group and continued to handle Doylestown’s legal affairs.

During his time at Saul Ewing, Reiss helped the hospital expand into promising new specialties and procedures. “I helped them develop a cardiac services program in the’80s before community hospitals were allowed to have high-risk stenting. We became one of the first community hospitals in the country to do that and have since developed one of the nation’s top cardiac care units,” he says.

At the time, such a specialty was almost unheard of at a community hospital such as Doylestown. As outside counsel, Reiss negotiated with the State of Pennsylvania to get the hospital the waiver needed to participate in a clinical trial which provided high-risk services on-site without open heart surgery. “It was not permitted at the time, so we had to have extensive negotiations with the state about the nature of the clinical trial,” he says.

Reiss cites regulatory compliance issues as one of the most difficult and interesting aspects of his job. “The physicians don’t necessarily pay attention to it, but they are definitely going to be affected by it,” he says.

In his role as general counsel, one of Reiss’s jobs is to parse complicated legal decisions into comprehensible precedents that the hospital can use to inform future business and legal decisions. “Saying ‘No’ is always easy. What’s much more complicated is saying, ‘What are the facts of those cases and how do they apply to what we’re doing?’” he explains.

Reiss points to a recent example related to physician payment where he had to unpack a complex legal case. “These cases could be read to say that if you’re paying any money from a hospital’s revenue stream to physicians as employees, that’s illegal. They could be read to say that, but I don’t think that’s what they truly do say so I’m currently working through that,” he says.

As a law professional with a background in economics, Reiss is always looking for ways to add value to the organization. The general counsel has kept his own small but effective legal team, employing one other attorney who specializes in risk management and litigation as well as a paralegal. “Compared to most hospitals I think our legal bills look like moon dust,” he says.

In a bid to reduce the amount spent on outside counsel, Reiss recently oversaw a move to bring legal work related to patient guardianship in-house. “We’re saving $50,000 a year or so by doing it ourselves,” he says. Doylestown will still use outside counsel in a number of specialized areas, including issues around intellectual property and labor laws.

The opportunity to see complex legal issues through from start to finish is one of Reiss’ favorite aspects of his role with Doylestown. “When I was outside counsel I would give advice, but half the time I had no idea what was going on,” says Reiss.

Reiss relishes his chance to attend the hospital’s daily morning safety huddles, where he can get a ground-level look at issues facing the hospital that he might be called in to advise on in the future. “You can see the whole pattern of activity and how one thing that is going on can affect something else, which you never see as outside counsel,” he says.

As if working fulltime in his 70s weren’t enough, Reiss typically rises each morning shortly after 4 a.m. to pursue one of his oldest passions: rowing. “I drive 15 minutes to the rowing club on the Schuylkill River, row 6 miles, then drive an hour to come here,” says Reiss.

With decades of industry experience and a unique, business-forward approach to legal issues in the health care market, the general counsel and vice president will continue to serve Doylestown Health as it works to fulfill its mission of improving quality of life and health outcomes across the community.