As a young law firm associate, he helped multinationals selling weapons of war overseas. The past three years-plus he’s been general counsel and chief compliance officer at a company that rents high-tech home care beds.

So which has Matt Packard found to be more the subject of stringent regulations?

“It’s easier to untangle the regulations of the international arms business than health care,” the 34-year-old Packard tells Vanguard in January from Ethos Therapy Solutions headquarters in Blue Bell, Pennsylvania. “Banking executives may disagree, but the regulations facing the health care industry are the most burdensome.” 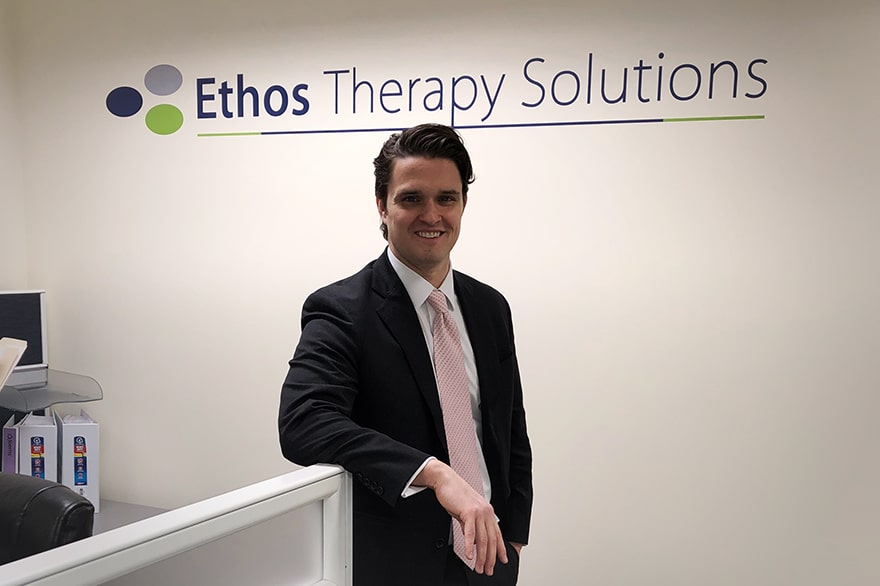 It’s at least partially that way for Ethos because this company is much more than a typical medical equipment dealer.

As Packard explains, the company regards itself as a wound care company and its products as medicine rather than a commodity. As much service provider as specialty bed distributor, Ethos undertakes responsibilities that attract the attention of regulatory agencies.

“In order for Ethos to prosper we need to pay a lot of attention to the corporate compliance program and have a strategic plan on how to grow responsibly,” Packard says. “We can’t have one without the other.”

Home care has become indispensable to a U.S. health care system precariously trying to balance costs while overseeing the well-being of its patients.

And yet, for a homebound patient undergoing a slow recovery, a standard bed should not be just what the doctor ordered. An estimated 160 people die each day from pressure injuries while untold numbers suffer from bedsores, the Ethos website reminds. How much better off they might be convalescing on one of the company’s immersion therapy mattresses or air-fluidized therapy beds.

But the cost of such a bed can be prohibitive, hence the Ethos model of providing one on a temporary basis, often for six to 10 months, and replacing it as the patient’s condition progresses or regresses. This, of course, brings into the equation third-party payers and often, Medicare’s oversight. 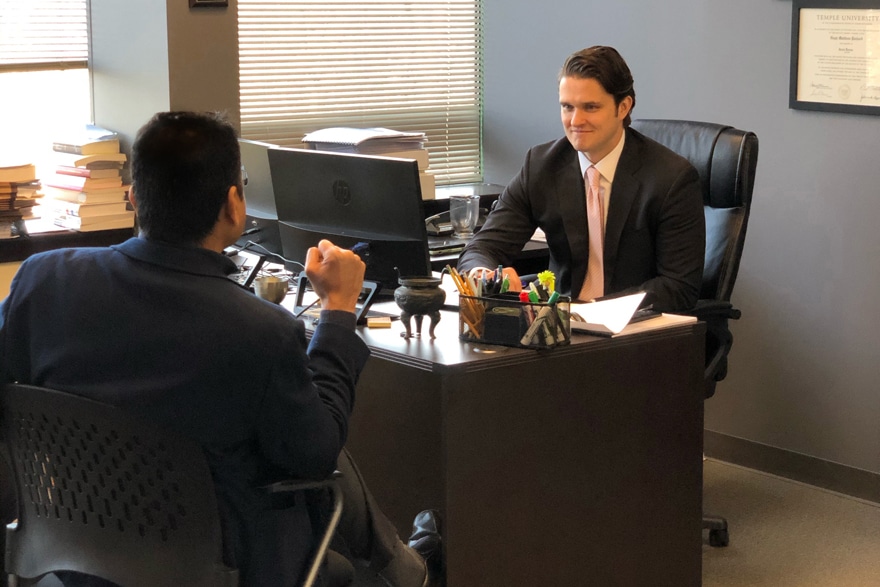 “There are companies that will defraud Medicare by keeping patients on products that they don’t really need, collecting as much money as possible without regard for outcomes. But we’re not one of them,” Packard assures. “Our business model is built upon healing wounds, not keeping patients on products. We want to ensure the right medicine. Otherwise you’re driving up costs for everyone—the patient, insurance company, caregiver, Medicare—and thereby every taxpayer.”

To that end, Ethos’ services include clinical nurses who track each patient and collaborate with caregivers to ensure wounds are healing consistently with the right product.

For all the right reasons, Packard says state and federal regulators have become especially vigilant about home medical equipment services, with strict enforcement of 30 Medicare quality standards—the Anti-Kickback Statute, the Physician Self-Referral Law, and the Beneficiary Inducement Statute just to name a few.

No time to relax

While staying compliant with a host of regulations, Ethos continues to advance the future of innovative medical beds and mattresses. Ethos is the nation’s largest home health provider of air-fluidized therapy; the gold standard hospital bed for treating the most severe bedsores.

“Our most popular product is the Clinitron®, the most commercially successful air-fluidized bed in history,” says Packard.

Such therapy isn’t new, the Clinitron and other air-fluidized therapy beds having comforted patients with severe burns or graft surgery since the late 1970s. But Ethos plans to design and develop a line of its own advanced medical beds. A long-time distributor of the Clinitron brand, Ethos commissioned some of the product’s original engineers to design an advanced immersion mattress specifically for the home care environment. Last year Packard trademarked the company’s first brand, Emerg.

“Next to its clinical efficacy, the best thing about Emerg is its simplicity,” Packard explains. “You make one selection on a touchscreen, then the machine automatically senses the weight and dimensions of a patient and sets the ideal microclimate and pressure settings to promote wound healing. No knobs, no dials, no extra steps.” 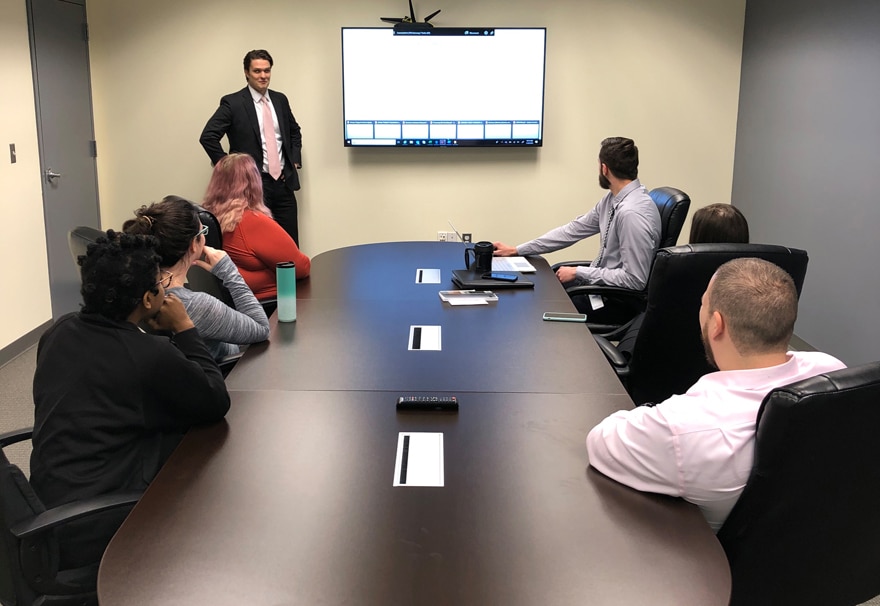 By any metric, the demand for this mix of technology and health care is growing, and Ethos is reaping the benefits. In the best of ways, Packard says there’s a chip-on-the-shoulder mentality at Ethos, its CEO and President Warren Byrne aggressive about pursuing new markets in the United States and abroad.

Having come to Ethos in December 2015, Packard has seen the workforce expand from 15 to nearly 100, the number of service locations increased from two to 12, and the company’s business booming from a presence in three to more than 25 states with vast global potential.

“Where we are now is the floor,” Packard says. “The whole world is the ceiling.”

A Temple University law grad with a degree in French from Hamilton College, Packard seems worldly enough for the job at hand, having lived in France and Turkey, and having citizenship in the U.S., Canada and Ireland, though he says not to make too much of that last part. His American parents were working in Ontario when he was born, thus giving him Canadian citizenship. Meanwhile, Irish law provides citizenship for those with at least one grandparent born in the Emerald Isle, and Packard had that base covered.

His real worldliness, however, came at the Philadelphia office of White and Williams, where Packard served as associate attorney for the international transactions and disputes, and civil litigation departments from 2014 to 2016. There his responsibilities included advising clients on global trade and customs laws, among them the Foreign Corrupt Practices Act, Export Administration Regulations, International Traffic in Arms Regulations and Office of Foreign Assets Control sanctions regulations.

Complex stuff to be sure, he says, though it sometimes pales in respect to the current to-do list. Nevertheless, he’s kept his toes in the international world. He negotiated a distribution deal with Umano Medical, a Canadian company with over 30 years in the medical business—and one that highlights its high-quality hospital and home care beds. He’s helped forge a strategic alliance with eKare, a wound care diagnostics company with a global presence, offering a 3D camera that might be a game-changer in diagnosing and treating wounds. 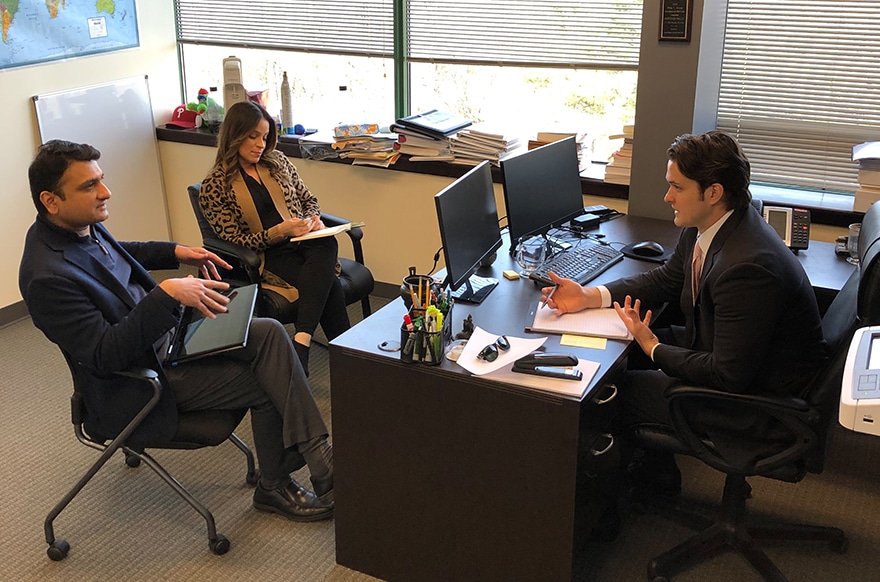 And there’s pickup hockey, a vestige of his Canadian birth, which helped get Packard on the Ethos team. The Philly area a hockey hotbed, Packard and Byrne played on the same team in a recreational league. The two must have been influenced by the Flyers’ heritage of walking together, even off the ice, as after their first game Byrne amiably told Packard that Ethos needed a lawyer.

“I was still with the firm and brought him in as a client,” Packard recalls. “Fast forward three or four years and the growth became dramatic. They realized they needed someone with the legal expertise to build from the top down.”

“My ability to parse international trade and anti-fraud regulations was oddly perfect training. In the defense industry, compliance is paramount. It’s the same in health care.”

Only, maybe more so.