For more than a decade, the graduate university has been a research center for developing technological and scientific innovations. Researchers here have also focused on solutions to providing food, water and energy while sustaining the environment. 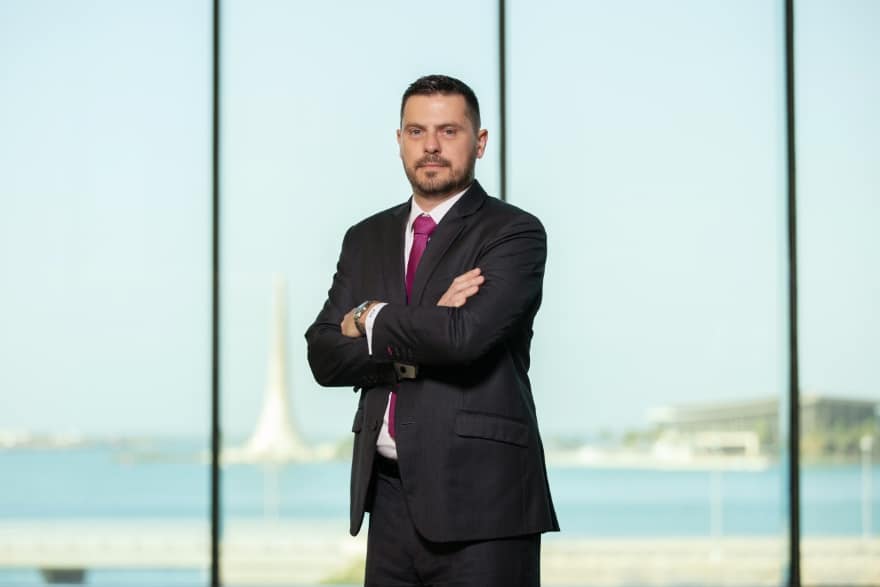 As Associate General Counsel Mario Buckley says, the university is helping transform Saudi Arabia and the world by being a catalyst for innovation, economic development and social prosperity.

Buckley came to the university after 16 years with Halliburton, during which he lived and worked on four continents. He was drawn to the university because it provided a more balanced life in Saudi Arabia, and because he saw an opportunity to support a global cause with a pragmatic attitude.

“Lawyers need to move away from the legalese and simplify things as much as possible,” Buckley says. “You need a thorough and deep understanding of the business you’re supporting in order to be able to do that.”

KAUST was established in 2009 by King Abdullah bin Abdulaziz Al Saud as part of the Saudi royal family’s efforts to further scientific and technological education and research in Saudi Arabia.

The university isn’t government operated, but its research is playing a crucial part in the Saudi Vision 2030 project. The initiative seeks, among other things, to make the country carbon neutral by 2030 while developing Red Sea areas for sustainable tourism and diversifying the Saudi economy. 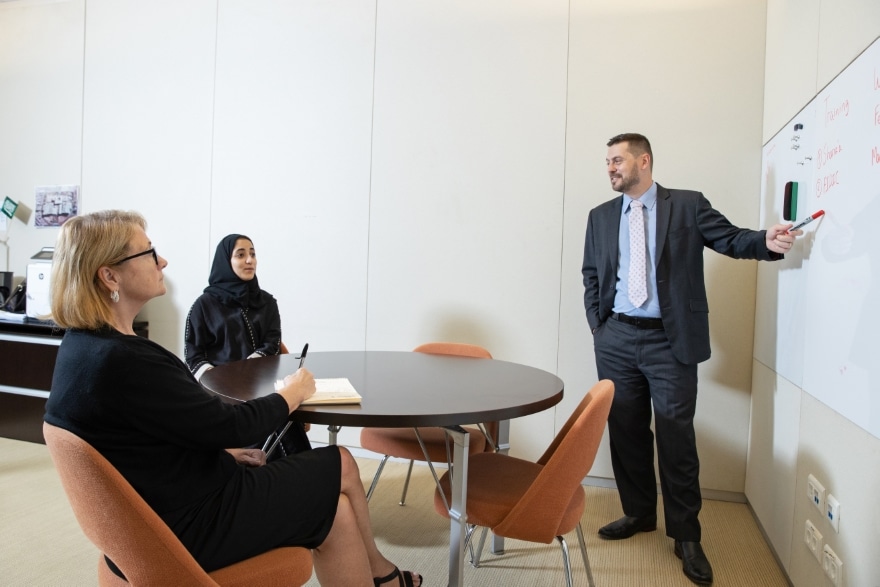 Research at KAUST is also crucial to supporting Neom, a planned Saudi Arabian development that’s also part of Saudi Vision 2030. Neom includes The Line, a planned urban center with smart technologies where amenities and necessities would always be within a five-minute walk and vehicles would be banned.

Upon arriving at KAUST in August 2021, Buckley says he noticed its contract management needed transforming, too.

“No one wants a 40-page legal document,” he says about removing terms and provisions for employment and supplier agreements that aren’t applicable.

Buckley is also helping create procurement templates that remove construction-specific language from general terms and conditions. With HR, he is helping update policies and procedures so the employment contracts are more dynamic and attractive to prospective faculty or staff. Part of Buckley’s initiative also includes training staff and raising awareness of good legal and contract practices. 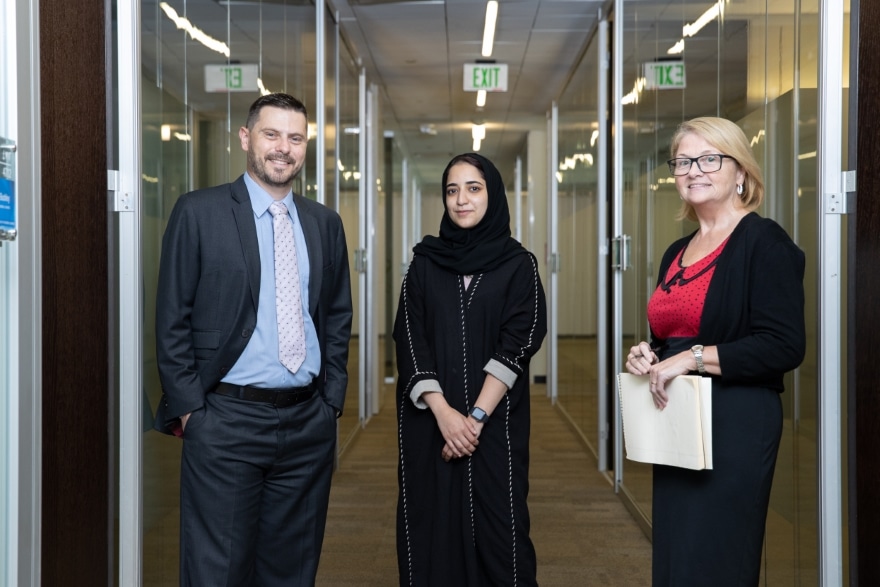 “Bringing together the parties and creating working agreements requires sensitivity and you need the experience to tread the balance,” Buckley says. “All the research and technology is meant to be translated into commercial use that’s scalable.”

“We’re helping further technology and innovation that has a global impact,” he says. “This requires me to view academics from a business perspective and it needs some translation to people who don’t always see the business side.”

A dual citizen of Brazil and the U.S whose father was from Oklahoma and mother is from Brazil, Buckley says he knew he wanted to be an attorney when he was in eighth grade. He just didn’t expect to be so well-traveled before joining KAUST.

Before finishing law school, Buckley was an intern for Halliburton. Shortly after graduating, he was responsible for deploying software that tracked the validity of the company’s environmental licenses. He also ensured the company was complying with regulations throughout Latin America. In 2007, he joined Halliburton’s legal department, negotiating and drafting service and sales contracts with Brazilian oil and gas operators. 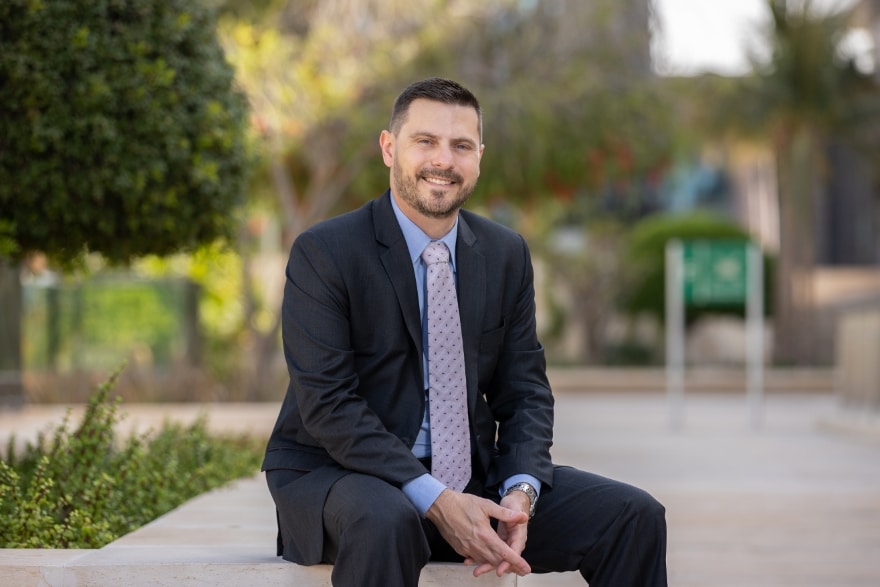 Buckley was sent to Cairo in 2008, spending three years in Egypt. First, he negotiated supply chain contracts for Halliburton’s operations throughout Africa. In March 2010, he was promoted to area counsel for West Africa, serving as head of legal for operations in 17 countries. In January 2012, Buckley transferred to Dubai when named Halliburton’s area counsel for Southern and East Africa, becoming head of legal in 13 countries for Halliburton.

Buckley was then sent to Houston as a law advisor in August 2013. While advising Halliburton’s senior management team for supply chain and property portfolio the U.S., Africa, Europe and the Middle East, he also earned his Masters of Law degree with a concentration on energy, environment and natural resources from the University of Houston Law Center in 2015.

He returned to Cairo in September 2017, tasked with managing legal affairs for Halliburton’s supply chain operations and property portfolio for the Eastern Hemisphere, which then accounted for $2.6 billion in annual business.

In August 2021, Buckley joined KAUST, saying he was ready for a new challenge.

“It has more than paid off in terms of challenges because KAUST is an integral part of the changes taking place in Saudi Arabia. It’s a very exciting period,” Buckley says. “Higher education and research is a challenging area. Coming to KAUST opened new doors for learning and working in different areas of the law, which is an incentive for me. New knowledge and increased responsibilities is important for everyone’s career progression.” 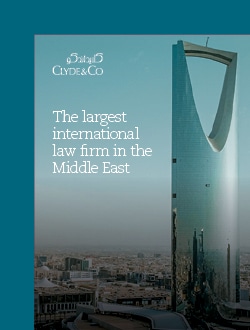