And the people who may hate disruptions the most are those in charge of the airlines, explains Rob McCulloch, a member of the Calgary-based WestJet legal staff since 2013 and, since last year, director of legal in support of nine business units at Canada’s second-largest carrier. 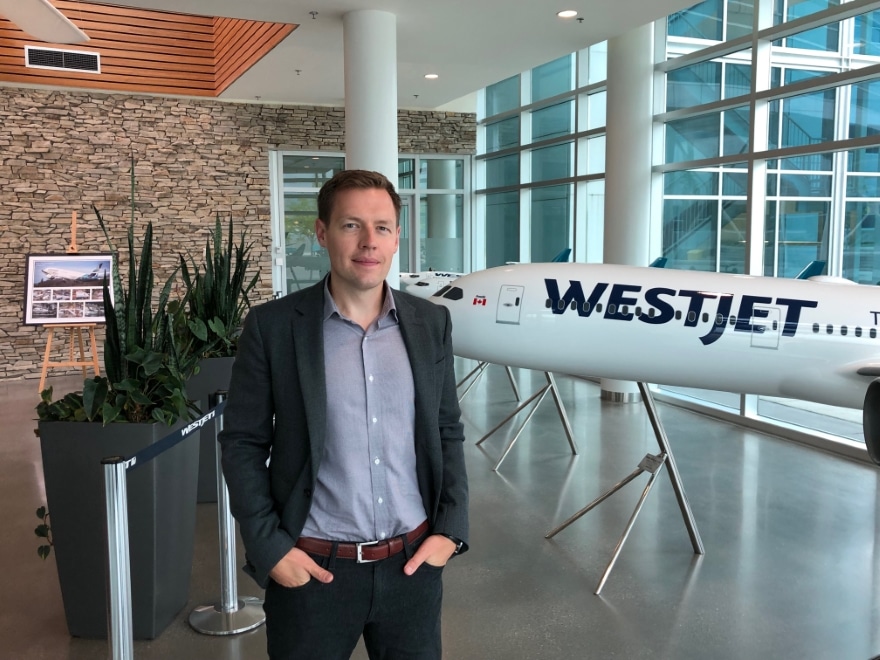 One delay can have implications across the network, pushing back the departures of multiple aircraft as well as add to the complexity and overall costs in a highly competitive industry. Yet the rules and regulations—and penalties—only get more stringent, and on multiple fronts as the carrier expands internationally.

Which is what WestJet has been doing since 2004 when it first offered flights to the United States and, in subsequent years, to the Caribbean and Europe, the most recent destinations being Paris and Barcelona. Having figured in this growth during the past six years, McCulloch will acknowledge the challenge of satisfying all that compliance in foreign jurisdictions as well as a new batch of rules on the home front.

“The European rules on passenger rights can be challenging to navigate,” he tells Vanguard in August. “They’ve been largely redrafted by the courts, and impose punitive compensation amounts against carriers specifically when measured against the cost of a ticket. Canada just introduced its own regulations modelled after Europe’s, so now we’ll have two regimes to navigate.”

McCulloch is referring to the Canadian Transportation Agency’s Air Passenger Protection Regulations (APPR), the first phase which went into effect on July 15 and the second due to be implemented on Dec. 15.

While McCulloch says WestJet, known for its guest care, has striven to meet such objectives even before they were on the books, grey areas will certainly exist given the complexity of an airline’s operations. Consider, for example, that WestJet will transport up to 70,000 guests in a day, and provides service to more than 100 destinations in over 20 countries. As a result, one weather event in the carrier’s network can have significant downline impacts to other, non-impacted, locations.

The second installment of the APPR in December comes with more stringent requirements. That includes the airlines providing compensation to passengers in the event of delays and cancellations depending on the arrival time at their final destination.

Grey areas there too, McCulloch says, though he’s grateful to be handed a longer to-do list as it means WestJet is thriving in a manner many didn’t envision when it was established as a low-cost alternative in 1996.

By the time the then-30-year-old McCulloch came aboard, WestJet was rapidly expanding and launching a new regional carrier called WestJet Encore, and placing orders for a new aircraft fleet, and that’s no small feat.

“It’s not like going to a dealership and picking out a new car,” McCulloch says with a laugh. “The commercial and fleet teams decide what aircraft they want and how many, and I provide support on a team with the subsequent contract negotiations. A few years later the planes begin to arrive.”

In 2015, two years after McCulloch arrived at WestJet, four wide-body Boeing 767s joined the fleet. The airline would also welcome 20 million guests that year. In 2016, one of those wide-bodies would make WestJet’s first flight to London. One year later WestJet would be the first Canadian carrier to deploy Boeing’s quiet and fuel-efficient 737 MAX 8, and in 2019 the Boeing 787-9 Dreamliner would be added to the fleet.

“There’s never a dull moment around here,” says McCulloch. “The airline industry is the most dynamic I’ve ever been part of.”

At home with airlines

It’s also one that feels most natural to him, as McCulloch’s father owns and operates an aircraft maintenance facility and aircraft charter company, Kluane Glacier Air Tours, in the Yukon capital of Whitehorse. McCulloch’s family previously operated a flight school, and his brother is a helicopter pilot.

As a University of Victoria undergrad and a University of Alberta law student, McCulloch would return home most summers and learn the aircraft industry hands-on, repairing various single and multi-engine aircraft alongside his brother and father, and working on his pilot’s license. 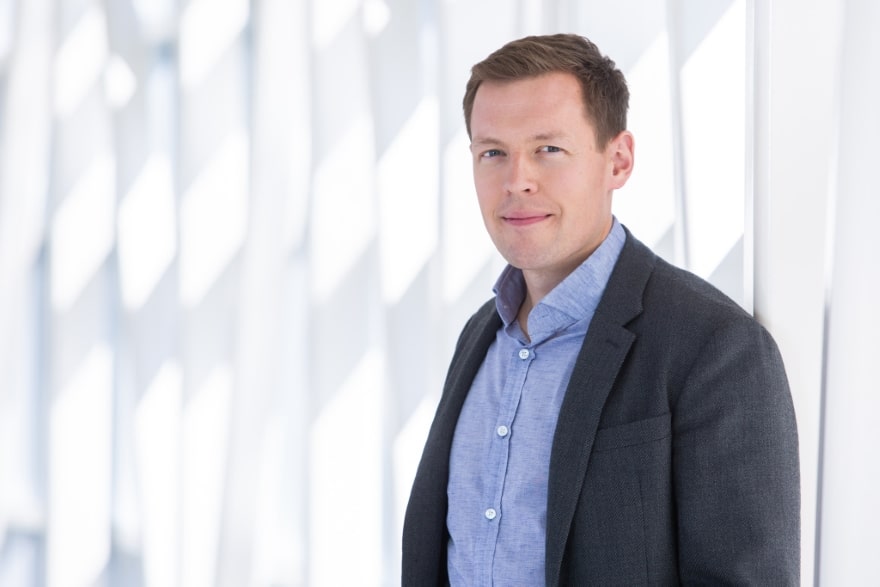 The law still beckoned, though not from a criminal defense perspective—the young McCulloch having served as a summer student constable with the Royal Canadian Mounted Police in the summer of 2003. He’d spend a year teaching English in Southeast Asia, take his LSAT while oversees and commence with his legal career in 2009, in the financial services group with the Calgary office of Borden Ladner Gervais LLP.

If that’s not a hand in everything, it’s pretty close—and professionally satisfying.

“As a young lawyer in a firm, you may be involved in a project, but you’re assigned smaller tasks and rarely see tangible results of what you do,” he says. “Here I was able to see this right away, even if takes a few years for the aircraft to arrive.”

But he can see other evidence every time he boards a WestJet plane, which is often—be it a wide-body or aircraft with subsidiaries WestJet Encore, WestJet Link and Swoop. 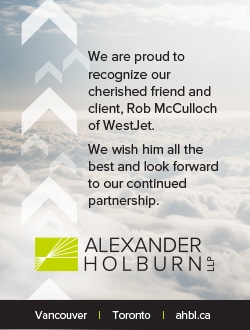