Always on the fast track

An in-house role, ideally a general counselship, had long been among Ana Cristina Flores Peña’s professional goals. Only she thought it could wait until later in her career, like perhaps when she was in her mid-30s.

She wouldn’t have to wait that long, for in 2017 the opportunity presented itself at the Mexican division of a Chilean-headquartered pulp and paper products conglomerate. Just 30 at the time, Flores would become the first in-house legal boss at Absormex CMPC Tissue, the Mexican operation of CMPC’s business division responsible for products oriented toward mass consumption.

Such opportunities would seem few and far between for someone so young, but Flores had already distinguished herself over the course of 11 years in the Monterrey office of one of Mexico’s leading law firms, Sanchez Devanny Eseverri, S.C., starting as a 19-year-old intern and rising to senior associate by the time of her departure.

At CMPC, Flores was entrusted with such responsibilities as assembling the Mexican wing’s legal department and weighing in on business and governance issues. Two years later, having brushed up on her skills with a couple courses in business and finance, Flores is feeling very much at home in-house and happy to be ahead of the curve on her career path.

A hand in everything

“What I like most is you are involved with the entire process of the company,” she tells Vanguard in late August. “At a firm, you may only see one or two practices, and may be involved in only a part of a project. Here, you are involved from the beginning to the end of everything.”

As the last quarter of 2019 neared, a couple of matters stood out on her to-do list, each of which should further streamline the operations of a company noted for Elite and Premier tissue paper, five types of baby diapers and Cotidian briefs for incontinent adults.

CMPC having operations in Argentina, Brazil, Chile, Colombia, Ecuador, Mexico, Peru and Uruguay, there’s a need to standardize the corporate documentation as much as is practically possible.

As Flores explains, the task is eased somewhat by Latin American countries generally abiding by the civil law tradition that emphasizes the systematic codification of their general law. While each of the aforementioned eight countries may have its own legal nuances, Flores says she’s contributed toward a first draft that CMPC expects to implement late this year.

“It’s going to be in our intranet so other members of the company from, say, the buying department can have access to contracts and documents,” Flores says. “This will accelerate the entire process.”

She also appreciates CMPC’s socially progressive values. While most of her professional interaction is with the Chilean-based chief legal officer, she also collaborates extensively with the general counsels in the seven other countries, all of whom are women.

“This makes us sort of unique,” Flores says, adding that CMPC is a true meritocracy where women and men are held in equal regard. “You don’t find this kind of legal arrangement in many companies.”

An eye on efficiency

Flores and the other general counsels are also working together with CMPC’s compliance officer in updating their workplace policies for what will be a more centralized operation. There’s need for compliance with anti-corruption laws and other measures in each country but, again, there’s enough room for companywide standardization.

The Mexican operation should only become more prominent, it having 2,000 employees among its manufacturing plants in the municipalities of Garcia and Santa Catarina in the state of Nuevo Leon, Altamira in the state of Tamaulipas, and exporting its goods to Central America.

In time that should necessitate a bigger legal department that now consists of just Flores and an associate. Versatility is among the attributes she values, her goals including less reliance on outside counsel for matters that could be dealt with in-house.

“I like people who get things done,” she says. “I am beginning to travel a lot so I need action-oriented and resourceful people. Among other qualities I look for in an associate, such as having good interpersonal skills and being motivated, I look for people experienced in corporate law, and he or she should also be familiarized with litigation so he or she can understand and overlook all legal procedures of the company together with our outside lawyers.”

She also continues to hone her own mix of legal and business skills, Flores now enrolled in a Master of Business Law program at Facultad Libre de Derecho de Monterrey. Prior, she earned a Master of Laws degree from Georgetown University Law Center in 2013 while living for a year in the Washington, D.C., area.

Flores will credit her original inspiration to her father, a Mexican notary public and attorney whom she’d often accompany to his office at a young age and observe how he’d interact with clients and people in general. “He’s always been my role model,” she says. “A very smart and hardworking man who’s helped me make every major professional decision and to whom I am very grateful.”

Born in Laredo, Texas, and having lived in the Mexican city of Nuevo Laredo, Flores has always benefited from dual citizenship. Wanting to practice law in Mexico, she’d earn her degree at the Universidad de Monterrey in 2009 and enhance her worldliness with a semester in Dublin.

Reminded that she’s done a lot at a young age, Flores is grateful that she continues to pursue her goals , and credits the many who have aided her cause.

“It’s been a very rewarding career, and I’m working very hard to keep it that way and move forward,” she says. “I was comfortable and happy at the firm, and was a little bit scared about trying something new. But this was a challenge I just had to accept.” 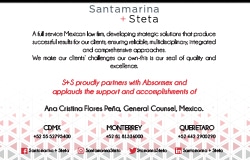 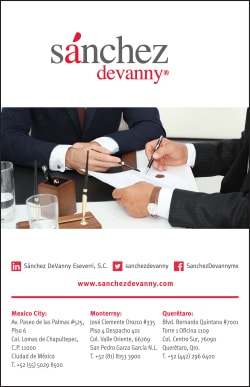 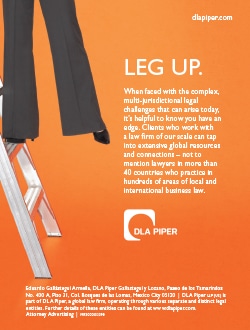