Marie Claire magazine calls it “the biggest new hair-treatment technology for years.” Kim Kardashian says it enabled her to go platinum and back without making a mess of her famous tresses. Molly Sims, she of Sports Illustrated swimsuit and NBC “Las Vegas” fame, also lauds the stuff.

The miracle products limit damage to hair during and after the coloring process, and according to the Wall Street Journal, Olaplex’s sales were approximately $60 million in 2015. With others looking to get a piece of that market, Olaplex has initiated some contentious courtroom proceedings to try and hold onto what it says is its alone. 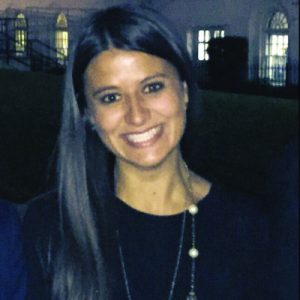 Developed by a couple of chemists on behalf of a Santa Barbara, California, start-up, Olaplex was the target of an unsuccessful takeover bid from Paris-based hair-products heavyweight L’Oréal, which was privy to some critical inside information during the acquisition negotiations. Now, the small company that went from fledgling to soaring in just a few years, is suing L’Oréal on charges of patent infringement after the latter introduced its own brand that Olaplex says came from patented ingredients.

And ready to take on L’Oréal on behalf of Olaplex is a 2009 graduate of William and Mary Law School, Tiffany Walden.

Walden is well-groomed in the fashion and beauty industries on such issues as counterfeiting, intellectual property infringement and brand protection. She’s ready to fight and says she has the endurance for this type of litigation that is more marathon than sprint.

“This is a particularly egregious infringement,” says Walden, who became Olaplex’s general counsel in 2016 after cutting her legal teeth with such fashionista favorites as shoe and accessory makers Stuart Weitzman, Tory Burch and Coach. “Any infringement of Olaplex’s valuable intellectual property is troubling, but when the willful infringer is L’Oréal and they are the largest beauty company in the world—controlling more than 20 percent of the professional beauty market— it can very much impact whether you succeed.”

The root of the issue

“Does she or doesn’t she? Only her hairdresser knows for sure.”

So went the long-ago slogan of another company, Clairol, and those 11 words earned a copywriter named Shirley Polykoff entrance into the Advertising Hall of Fame. And it’s a good bet that “she” did and still does, as that old commercial has been partially credited for an estimated 70 percent of American women coloring their hair at some point. Which, if not done right, can make for some messy heads, with dry damaged hair and severe breakage resulting from over processing.

For that as well as other unsightly situations, Olaplex claimed a remedy in 2014. Two chemists, Drs. Craig Hawker and Eric Pressly, created what they called a bond-building process to protect hair undergoing harsh treatments necessary to change the hue.

During the initial process, a patented active ingredient to the bleach would interact with hair molecules, rebuilding each weakened strand from the inside out. After the new color was applied, another additive—equally patented and active—would be applied for shampooing and conditioning, giving boosted protection. A third treatment could be applied at home between trips to the salon.

While Olaplex won’t reveal what those additives are, it does say they’re free of silicone, sulfates, phthalates, DEA and aldehydes, weren’t tested on animals and are versatile enough to be used with any shampoo, conditioner and color.

Celebrities weren’t the only ones who agreed. Almost overnight Olaplex became the beauty world’s buzzword, winning industry awards and garnering attention in traditional and social media—and from L’Oréal, which, according to a Nov. 23, 2016, Wall Street Journal story, vows to fight Olaplex’s accusations.

And Walden vows to fight L’Oréal.

“The idea of putting additive in lightener or hair color was never done before,” says Walden. “With all the billions of dollars people spent on hair treatments, no one had thought to do this before we did. After two years in the market, L’Oréal came out with three products that are complete knock-offs of Olaplex and that infringe our validly granted U.S. and U.K. patents.”

Walden goes so far as to liken Olaplex’s products to the creation of the iPod—an industry game-changer that made portable CD players as obsolete as the old tape players in the electronic-disposal area at your local landfill.

“It’s one thing for a company to make a shampoo that’s a little better, but Olaplex changes how hairdressers operate every day,” she says.

The merits of the litigation aren’t likely to be decided anytime soon. In November, Olaplex filed the suits in U.S. District Court for the Central District of California and in the High Court of the United Kingdom. Such wheels of justice turn slowly.

Statista, the online portal that gauges market and opinion research, predicts that in 2017, global sales of hair products will be $85.3 billion, continuing a trend that for years has seen annual increases of a couple billion dollars. Olaplex might amount to just a small portion of the overall revenues, but it is a growing portion.

In just two years, more than 300,000 salons in more than 80 countries have come to use Olaplex, Walden says, adding that the product has more Instagram followers than those of any other professional hair product.

“We want every salon to use Olaplex, and we look forward to creating new professional and consumer products that appeal to stylists and their clients alike.”

“We’re going to be very aggressive at protecting our brand,” she says. “We are growing quick and we haven’t achieved maximum market penetration. We want every salon to use Olaplex, and we look forward to creating new professional and consumer products that appeal to stylists and their clients alike.”

So, Walden anticipates having her hands full, not just with this litigation but her other Olaplex duties that include negotiations, various business matters and managing over 100 chemical patents, some of which she believes could lead to additional game-changing products for the professional beauty industry.

She says there’s a learning curve going from her previous role in the fashion industry into the beauty business, but enough similarities to make it a logical progression. “Where I add value is through my intellectual property background,” she says. “I have experience in larger companies than Olaplex, and know how to tailor our best practices to a small company.”