Steve Gaer keeps his general counsel card in his back pocket, literally. Most of the time, when he goes into business meetings with R&R Realty Group, he passes out his chief operative officer (COO) business card. 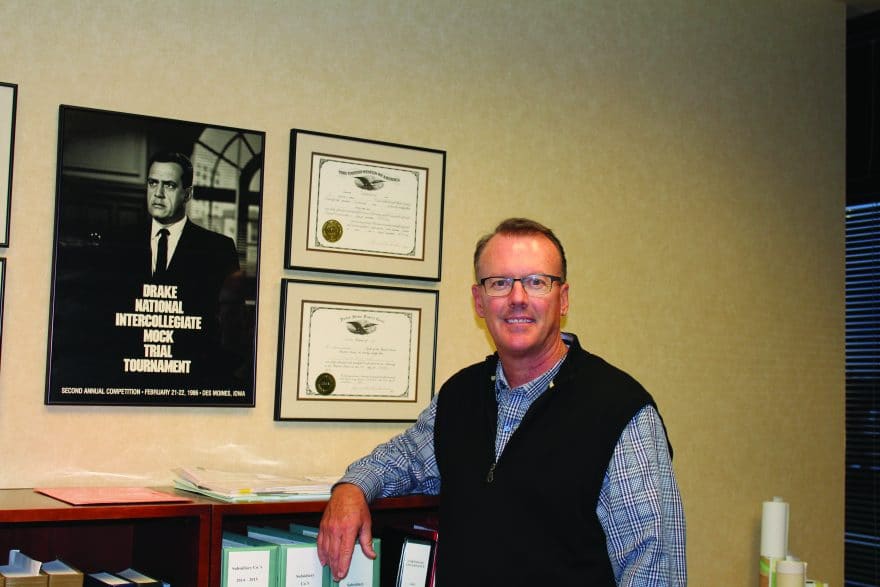 In his combined roll as COO and GC, Gaer promises to get R&R Realty Group’s legal documents, like leases, out in 48 hours. When, for instance, a broker sends a deal offering to 60 commercial real estate firms, Gaer makes sure R&R Realty group can complete due diligence and close faster than any other company.

If he didn’t serve as both COO and GC, Gaer says he wouldn’t be able to deliver that speed or the advantage it brings.

“Sometimes people feel like the faster you do something the more risk you have in making a mistake,” he says. “I think the business model that we have is just the opposite. The faster we can get something done, one, gives us an advantage and, two, the way we do it, I don’t think we’re missing anything.”

Gaer sees business communications going in the direction of texting, where a response is expected almost instantaneously. Throughout his career, Gaer has relied on a 42-second rule when talking with entrepreneurial-minded business owners.

“I have 42-seconds to get out to these people what the issue is, why it happened, what the relevant facts are and what the alternative solutions are before they start making decisions because they are so good at understanding what the important issues are and are such a good judge of people and what might influence the person’s decision to do business with us,” Gaer says.

To operate that quickly, it’s essential that, from the start, Gaer is at the table for business conversations. It means he understands all the nuances of the deal, and it eliminates any back and forth between the business and legal sides.

“In my opinion the biggest advantage for the position I have is how quickly you can go from making a business deal to getting it legally signed, which we all know until you get the legal document signed, you really don’t have a deal,” he says.

Being both COO and GC also helps Gaer approve of risks other lawyers might not.

“We’re in a better position to say, ‘You know what, I think the chance of that happening is less than one percent or five percent, and if it does happen, I’m going to negotiate a way to make it work, and I’m not going to lose this business opportunity by over lawyering or scaring people off in the negotiations,’” Gaer says.

R&R Realty’s biggest challenge is a good one to have: it has more opportunities than it can close on.

“We have to pick the right ones because we can’t seize on all of them,” Gaer says.

As busy as he is, Gaer finds time to carry a third important business card. That one reads City of West Des Moines, Mayor.

Since 2008, West Des Moines has had its five best years of economic development, with over $3.5 billion worth of new building permits. In 2016, the city of 63,000 residents had its best year, with $1 billion worth of building permits filed in the first 10 months of the year. Wells Fargo located its mortgage and credit card headquarters in the city, and Microsoft is building its third data center there.

“I get the chance, as mayor, to sit down and actually see how other businesses and developers spend their money, how they analyze their business, how they approach development,” Gaer says. “It’s a huge advantage to me because I get to see how other really smart, really capable people do it.”

With the insight he has as mayor, Gaer can structure better business deals for R&R Realty. It makes him more innovative, he says, in working with cities on development agreements that benefit everyone involved.

“Both of my brothers are in sales, so I think they’re all trying to figure out how I got interested in law and politics,” Gaer says. “I think I got the best of both worlds. At the end of the day, it worked out so nice because the political experience probably helps me as much in what I’m doing now as what I’m doing in sales or the legal side of it.”

As a kid, Gaer loved the TV show Perry Mason, which is about an attorney who successfully defended the falsely accused. His mom would let him come in from playing to watch it.

In high school, Gaer made a keen observation while working at the public golf course—all of the people playing golf from 8-to-5 were sales people. They had to be doing something right, he thought. Gaer took note and pursued a business degree from the University of Kentucky.

As a kid, Gaer loved the TV show Perry Mason, which is about an attorney who successfully defended the falsely accused. His mom would let him come in from playing to watch it.

When he got to Drake University Law School, all of the political science and English majors were confused why there was a business major in the room. When he was asked about it he would respond that he was there because he didn’t want other lawyers to mess up his future business deals.

While his business background certainly helps Gaer in his combined COO and GC role, he owes his success blending the business and legal worlds to something more innate.

“I think a lot comes down to personality,” he says. “I think a general counsel may not have to have a business degree if they have the personality that suggests he or she loves to make deals.”

He guesses he inherited his affinity for deal making from his father and grandfather, who weren’t in sales but probably should have been.

“I think R&R Realty Group has provided me with the absolute perfect role,” Gaer says. “They’ve created a position for me where I think I can have as much influence on this company as almost anybody else here because of the depth and breadth of what I get to do, and it gives me the latitude to also be the mayor of West Des Moines, where every single day I’m learning something new and finding ways to improve our residents’ quality of life.”