Pratt has gained ample experience in commercial litigation, intellectual property, mediation and product liability throughout the course of his 39-year legal career, but his role with the Boston-based company opened Pratt’s eyes to the world of business and the importance of leadership. 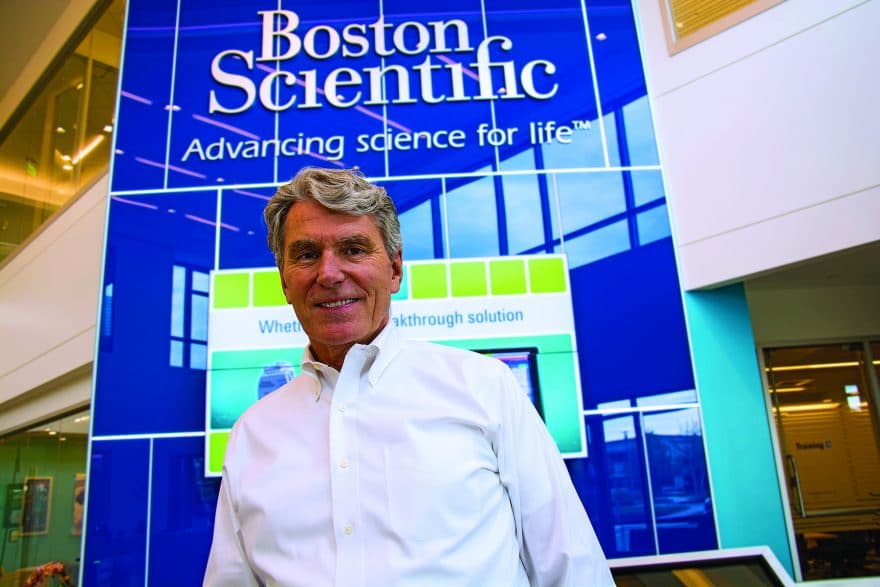 After graduating from Drake University Law School in 1975, Pratt spent the next 31 years at Shook, Hardy & Bacon in Kansas City, Missouri, where he was a trial lawyer with a focus on defending pharmaceutical companies and medical device manufacturers, and served as co-chair of the firm’s drug and device litigation section. After three decades honing his skills in the law firm environment, Pratt was ready for a challenge and new opportunities. One such opportunity presented to him was to join the executive team at Boston Scientific as general counsel and corporate secretary.

“I felt like I was at the top of my game; clients seemed to like what I did, I handled major litigation, but it was the right time for me to try something different,” he says. Despite initially having little interest in the position with Boston Scientific, Pratt became more intrigued as he discussed the scope of the position with Boston Scientific’s CEO at the time, Jim Tobin.

“What he had in mind was clearly a legal role, but it was also a business, strategy and governance role, and most of those things I had never done before,” he says.

Four different CEOs have served the company during Pratt’s tenure at Boston Scientific and he says this rotating cast of executives has actually made him a stronger leader. “It taught me the importance of understanding and applying change management because you have to adapt to new styles, personalities and objectives,” he says. “Those shifts helped me a lot in developing leadership skills and applying them to different situations.”

While Pratt was wary of losing the opportunity to work in a courtroom, the new challenges offered in a role with Boston Scientific were too much to pass up. The job gave Pratt the chance to explore new areas of the legal, business and corporate worlds while playing off some of his greatest strengths as an attorney.

“I was really experienced in managing litigation and litigation risks, which the company had a significant amount of at the time I was hired, so that was something that fell into my sweet spot,” he says. “I think they also saw that I could be a leader in our organization, develop people and work collaboratively.”

Of course, being a leader in a law firm is different from being a leader as a general counsel in a large corporation, a lesson that Pratt learned quickly.

“Many law firms do not insist on leadership skills. Their financial model is based more on how many hours you bill and how much business you bring in. When you come into the corporate world, the model is different,” he says.

In his role as chief legal counsel, Pratt’s job entails working closely with other senior executives to make crucial decisions regarding the company’s future. “I sit on a committee with the CEO and chief financial officer to make decisions about what businesses we ought to acquire or what enterprises we should invest in, so part of what I do is look at a legal construct and determine if what we’re proposing to do makes sense,” he says.

Pratt often plays the role of sounding board, leveraging his decades of legal experience to bring new insights to the team at Boston Scientific. “I listen to business plans and share my insight on whether it makes sense for us to move into that space or not,” says Pratt.

In one recent example, Pratt and the executive team oversaw Boston Scientific’s acquisition of the men’s health component of a large pharmaceutical company for $1.6 billion. “We had to go in and do our due diligence: look at if there were any red flags, such as portfolio, clinical, governance, compliance or regulatory problems. Depending on the size of the deal this process can take months but it’s very important because you want to be careful to invest in something that is going to pay dividends down the road,” he says.

In addition to his general counsel duties, Pratt also serves as the company’s chief administrative officer, a job that entails a wide range of tasks. “Over the years, I have had a number of different functions reporting to me, including compliance, global regulatory, quality, corporate marketing, corporate communications, global security, human resources and government affairs,” he says.

While Pratt’s slate of disparate duties might seem to fall outside the purview of a general counsel, he says it speaks to the way the position has evolved over the years. “We’re beyond the era when the general counsel is someone who comes in and you ask legal questions and that’s it. There is a growing trend to involve general counsel in a number of business matters outside of the legal department and in my view, that makes them a more well-rounded general counsel,” says Pratt.

Pratt isn’t the only one working to help Boston Scientific minimize its risk; it’s a concern commonly shared by nearly everyone in the company. “You can’t believe how much focus is brought to the question of ensuring that our products are exceptionally safe,” says Pratt.

“It didn’t surprise me; I’ve worked for the drug/device industry for a long time, but to be here and see the protocols and the people being trained makes you realize how everything is incredibly scripted to produce safe and effective products and help patients,” he adds.

Pratt says that the focus on quality isn’t limited to the pre-clinical studies, clinical trials or other activities leading up to a product being introduced to the market. The scrutiny continues after the product is on the market. “That post-market surveillance is where we continue to learn about our products,” he says. “There is a robust set of processes, protocol and documentation.”

Boston Scientific can almost be seen as a data company, if only for the pure amount of raw information it is processing on a daily basis. “We’re collecting data all the time. We have people with heart devices who are uploading data constantly,” says Pratt. That wealth of private information adds another layer of legal complexity to Pratt’s role as it forces him to focus on minimizing the risk associated with cyber-attacks.

A leader first and foremost

Coming from a law firm background, Pratt’s experience with the corporate world was limited to his time spent working as an outside counsel. “Because I was in the litigation world, I wanted to move pretty quickly and my impression was that people working in corporations tended to have a lot of meetings,” he says. While Pratt was wary of the corporate world’s meeting-heavy culture, he soon learned they served an important purpose.

“Meetings are really important, not just because you get something done, but because you see people and you can create a social fabric from those kinds of sessions,” he says. “In my eight years here I’ve learned about the importance of teamwork and the fact that when you get a group of leaders together you can get amazing results.”

As one of the founders of Boston Scientific’s leadership school, Pratt credits his law firm background with instilling in him a strong sense of leadership and what it simply means to be a leader. The program consists of training spread out over the course of a year covering everything from hands-on exercises and learning skills from senior leadership to best practices.

While the company previously had a training program that taught management skills, Pratt helped take it one step further. “Management skills and leadership skills are two different things,” he notes.

When making hiring or promotion decisions in a corporate environment like Boston Scientific, Pratt says that leadership qualities often top the list of desirable attributes in a candidate. “If someone is up for an interview, we probably already know that he or she can do the job, but the question really is does that person have the skills of a successful leader?” says Pratt.

The general counsel points to an example at the company when a senior leader in his own department made an unexpected departure, leaving the company with a decision on how to fill that individual’s shoes. While Pratt initially thought the company would be better off to make an outside hire at the most senior level, one of his colleagues suggested turning over the position to the two more junior employees who had worked under the departed manager.

“It was one of the best outcomes I’ve ever seen in my life. Everyone in the company who has worked with that group has praised the decision and it presented an opportunity not only to promote those two people into a position where they excelled, but also advanced the legal department’s reputation in the eyes of the company,” he says.

Working for a medical device manufacturer, Pratt doesn’t have to look far to find a sense of fulfillment in his position, but it’s the opportunity to instill strong leadership values and strategies in all those around him that really drives Pratt’s work at Boston Scientific. “It makes me feel better about myself to be doing things that I think are benefiting other people,” he says.

With decades of experience within the legal side of the pharmaceutical and medical device industry, strong leadership skills and a commitment to improve the work and lives of those around him, general counsel Tim Pratt will continue to thrive at Boston Scientific.