When this global holding company brings a new entity into the fold, it’s likely to be for the long term.

Such was the case in late 2014 when Basin Holdings acquired FHE, a Colorado-based company providing innovative equipment to the energy industry. Ashton Valente, having become Basin’s first general counsel one year earlier, finalized the transaction details, oversaw the integration and then some.

Soon after the acquisition, FHE developed a technology called RigLock, aimed at enhancing efficiency and safety in the oilfield. The device remotely connects surface equipment to the wellhead, making operations more efficient. It also eliminates the risk of a worker adjusting intricate machinery while suspended under unstable pressure-control equipment. 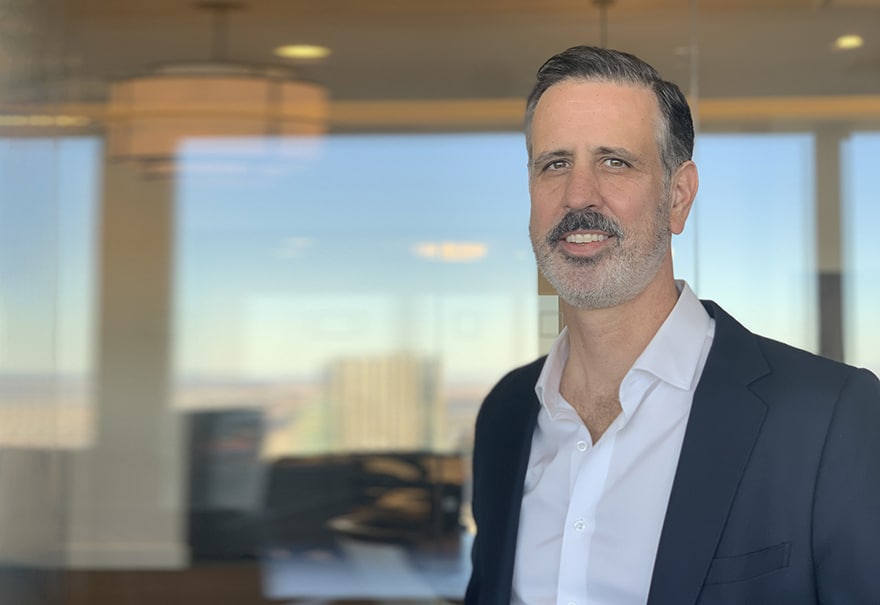 “A real game-changer for the oil and gas industry,” Valente tells Vanguard in February from New York City, where Basin is based. “An extremely valuable product that others have tried to copy.”

Only they couldn’t—not with Valente and his legal colleagues enforcing FHE’s patents against competitors and winning lucrative settlements. As he emphasizes, while Basin Holdings operates like a private equity firm, it’s not just about buying, value-adding and unloading its acquisitions. Quite the contrary: Basin aligns its long-term interest and infrastructure with that of each of its new partners to the benefit of both.

An M&A specialist at Skadden, Arps, Meagher & Flom from 2003 to 2013, Valente joined Basin early in its trajectory and has overseen dozens of acquisitions and startups for the company.

He also manages all legal issues for Basin. For example, should litigation arise, as it did with FHE’s RigLock, he’ll mobilize a response, likely with the help of outside counsel, which Valente finds the most efficient model—his direct reports being just his Assistant General Counsel David Sadder and their Legal Assistant Ellen Cahn.

“We stay lean, given the space we’re in,” he says. “The beauty of our model is that when there’s a downturn, we can quickly and dramatically reduce outside fees which account for a big chunk of our overhead during good times.”

Valente’s role is not limited to the energy industry. The energy market having more downs than ups in recent years, Basin has been diversifying with an eye toward startups engaged in non-energy related manufacturing businesses. COVID-19 has hastened that diversification due to the dramatic downturn in demand for oil and gas and, consequently, spending on oil and gas production in 2020. 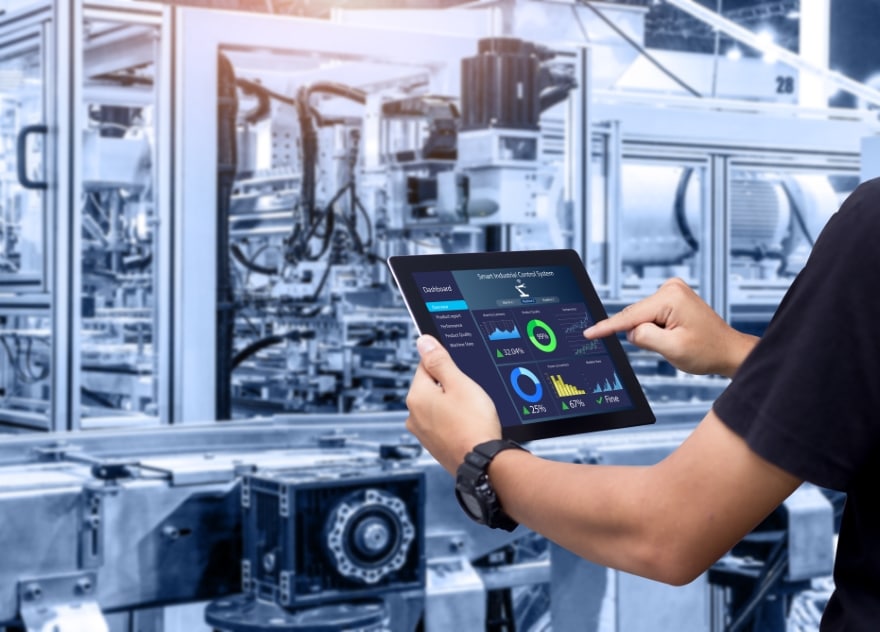 Among Basin’s recent startups is American Mask Co., a McLean, Virginia, producer of several face coverings—all manufactured in the United States and certified by the Food and Drug Administration. True, as Valente acknowledges, the demand for low-cost disposables will wane as the pandemic mitigates, but this company produces other products such as a fog-resistant face shield that fits over another of its products, a half-mask respirator.

The reusable half-mask respirator comes with disposable cartridges that maximize airflow and protection. These products will most likely find specialized uses.

“We’re willing to diversify into whatever we find interesting, and this is one of those opportunities,” Valente notes. “Even after we stop having to wear masks every day, there’ll still be a need, for instance, to replenish the national stockpile.”

To bitcoin a phrase

One of the more interesting—and unconventional—of Basin’s diversification plays would merge energy production with cryptocurrency in a new venture called Block Harvest—which will be owned by an affiliate of Basin and under control of the same management team.

Oil wells in remote locations produce natural gas for which there is no market due to limited transportation infrastructure. The gas is typically flared on-site. 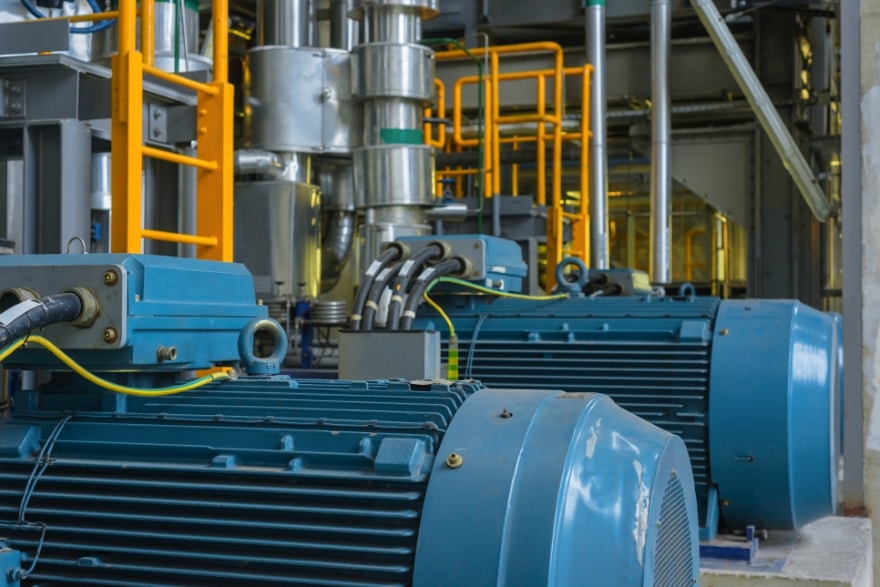 “The more bitcoin is mined, the more energy it takes to mine it,” Valente says. “Block Harvest has devised a way to significantly reduce the cost of that energy.”

Bitcoin mining probably won’t be the largest of Basin’s endeavors but, as Valente reminds, it is indicative of the firm’s creative mindset, which he wholeheartedly shares.

A 2003 Georgetown University Law Center graduate, Valente had long envisioned an in-house role, but first needed the seasoning that Skadden, Arps, Slate, Meagher & Flom provided for the first decade of his professional life.

Those years were a rewarding phase in his career development, with Valente at times based in Washington, D.C., and Sydney, Australia, mostly focused on general corporate law, M&A and corporate finance.

“I wanted to go in-house after my first four or five years, but the financial crisis in 2008 made for a lean job market. And, more importantly, I wanted to hold tight until I found the right fit,” he explains. “I still recommend that young lawyers go to a big firm to get their training and work ethic. Though it took a bit longer than I wanted to find the right opportunity, I wouldn’t take back those years at Skadden.”

Big law prepped Valente for a role that, to his liking, has become more managerial than legal while providing a better family life for the married 43-year-old father of daughters ages 6 and 10.

He’s often positioned as the intermediary between outside counsel and the management teams at Basin’s operating companies—each of which has its own culture, opportunities and challenges.

“My favorite aspect of the job is being in a position to take a business-oriented approach to legal problems,” Valente adds. “We’re there to support growth, while mitigating risk, without introducing unnecessary or overly burdensome bureaucracy.” 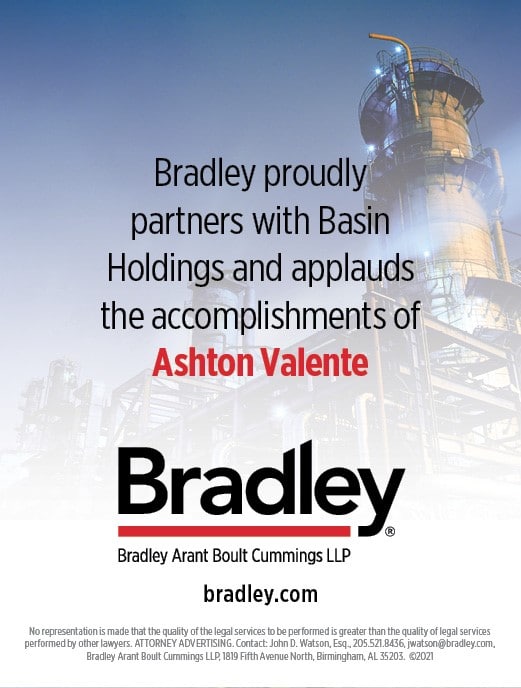 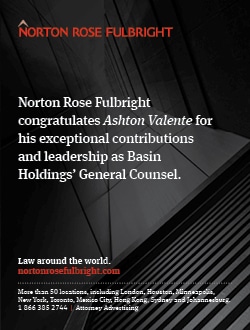