Throughout San Diego County, there are six automobile dealerships in the Bob Baker Auto Group under Bob Baker Enterprises Inc., many of which are longstanding landmarks that have served area customers for generations. Owned and operated by Bob Baker and his son, Chris Baker, the family-run company operates Chrysler, Jeep, Dodge, Ram, Fiat, Alfa Romeo, Mazda, Toyota-Scion, Volkswagen and Subaru franchise dealerships. 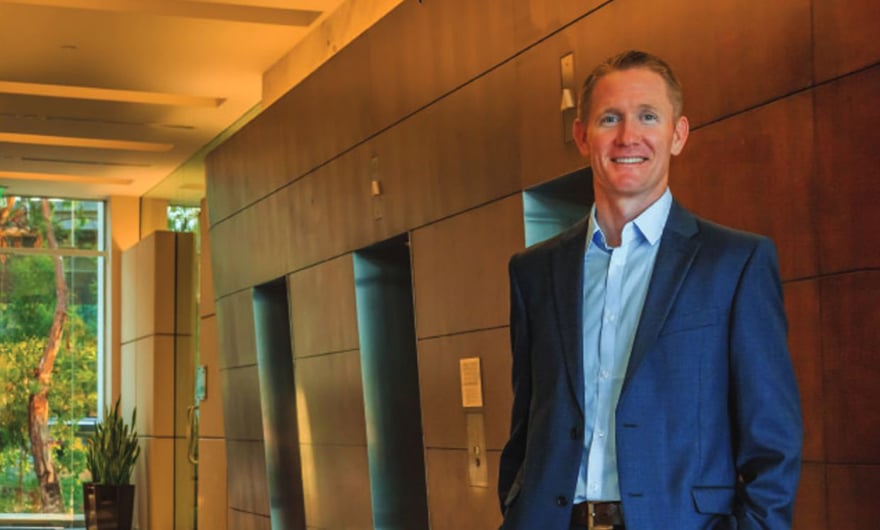 As one of the most successful automotive groups in the area with more than 400 employees, properly managing the legal side of the business is of utmost importance in maintaining the brand integrity and upholding the name of the longstanding group. This is where Wade Poulson, general counsel for the Bob Baker Auto Group and its related entities and affiliates, comes into play.

Poulson has now been with Bob Baker Enterprises for five years and he brings a strong law-litigation background to his position, providing legal counsel and active representation in support of the group’s business operations.

From the outside in

As one of 11 children, Poulson says he always had a desire to stand out. “Since I can remember, I had a desire to be an influence in the world and to help people,” he says. “My father raised our large family working in the construction field and all of my older brothers have been very successful following in his footsteps. I was sort of the black sheep of the family because I wanted to take a different path.”

Through his adolescence, Poulson had a few mentors whom he looked up to who were attorneys. “I wanted to be like them so I thought I should try out the legal field,” he recounts. “After seeing some injustices in the construction trade, I thought I would become a construction lawyer.”

Coming from a large family, it was up to Poulson to fund his way through law school. “I had to pay my way through school because my parents didn’t have the money,” he says.

A San Diego native, Poulson attended California State University San Marcos, where he obtained a degree in political science. He then went on to obtain his law degree at the Thomas Jefferson School of Law. “I wasn’t attending one of the top-tier law schools so I knew I had to find a way to stand out and distinguish myself,” he recounts.

Poulson ended up graduating in the top 5 percent of his class and he served as the executive editor of the Thomas Jefferson Law Review, the school’s student publication. Upon graduating in 2007, he took a turn from the early direction of construction law, ending up at a boutique litigation firm in Orange County.

Before joining Bob Baker Auto Group in 2010, Poulson worked for Willis DePasquale LLP, a litigation firm, where he focused on large-loss liability claims and commercial and business litigation. “I first came in contact with Bob Baker while handling a large-loss liability case for the group’s Lexus dealership,” he recounts. “The Bob Baker Group had lost its previous general counsel and was trying to manage all of the legal business on its own.”

When the company saw Poulson’s work and aggressive litigation in the high-exposure case centered on Toyota’s unintended acceleration issues, Bob Baker decided to bring Poulson in-house. “I was defending them from the outside, but after a while they wanted to bring me in-house full-time,” says Poulson. “We currently own and operate six different franchises here in San Diego and each franchise has its own management structure and hundreds of employees, so you can imagine the issues that could arise without an inside legal advocate.”

Today, as the company’s in-house general counsel, Poulson works with everything from employee claims and human resources related issues to consumer litigation. “We pride ourselves on being family owned and having exceptional customer and employee satisfaction, but with so many transactions there’s bound to be an issue here and there,” he says.

Poulson has garnered many important victories for the group, especially on the consumer litigation side. “I handle 90 to 95 percent of our consumer litigation cases, which helps score huge savings for the group because cases and claims typically are resolved before they have to go through our insurance,” he explains. “I work closely with our insurers who are always aware of the cases, but I directly litigate most cases without incurring the loss runs on our policies.”

His litigation background also helps him tackle plaintiff shops that specifically target high-volume auto dealerships. “We take on these cases and aggressively defend many frivolous claims,” he says. “Most plaintiff attorneys know we have the experience and don’t want to tango with us because of it.”

It is also Poulson’s responsibility to oversee outside counsel. “We look for someone who shows direct interest in our automotive group and who has a high level of professionalism,” he says. “We want someone who will go to bat for us in the most efficient and professional way.”

Even a highly integrated, multifaceted organization such as Bob Baker Enterprises Inc. isn’t perfect — that’s why trusted corporate general counsel such as Poulson is critical to success and upholding a well-regarded name in the business.