For almost 10 years, NuScale Power LLC has been developing safer, smaller, scalable nuclear power technology. But the company, which has more than 450 employees and receives hundreds of millions of dollars in funding each year, has only a trickle of revenue.

The technology NuScale is developing grew out of a Department of Energy (DOE) funded research project between the Idaho National Environmental & Engineering Laboratory and Oregon State University. When the DOE program ended, the OSU researchers continued to pursue the technology and granted NuScale Power the exclusive rights to the nuclear power plant design. 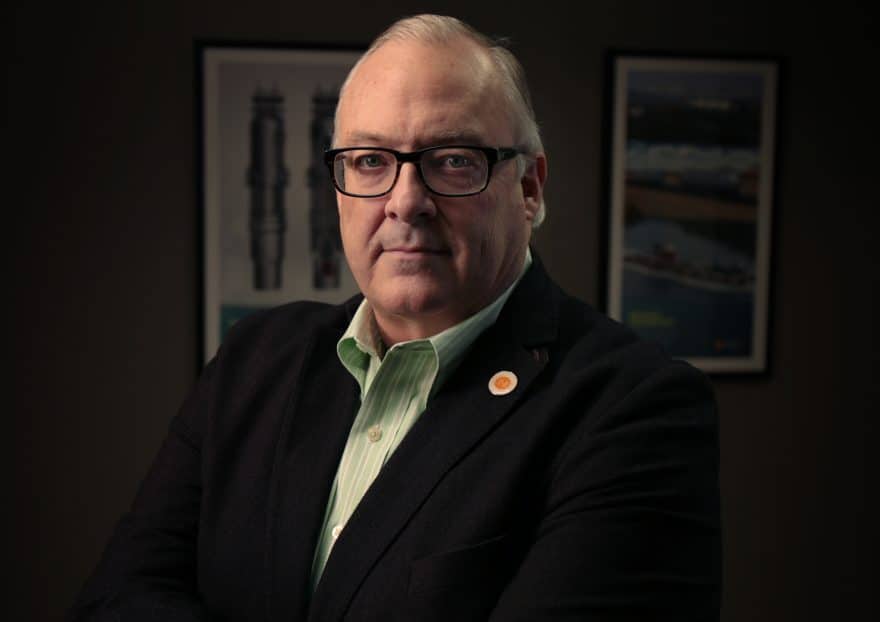 Before NuScale can build its first plant, though, its technology must be approved by the U.S. Nuclear Regulatory Commission (NRC). That process takes more than three years and requires the oversight of Bob Temple, NuScale’s general counsel.

From submarines to nuclear reactors

Since graduating from Illinois Institute of Technology’s Chicago-Kent College of Law 25 years ago, Temple has been in both private practice and in-house positions in the nuclear power industry.

Fortunately for NuScale, Temple has spent his lifetime working in the nuclear power industry. Before becoming a lawyer, he started as a finger-on-the-button kind of guy, working on a nuclear submarine with the U.S. Navy and then as a licensed nuclear senior reactor operator, first at General Electric, then at Commonwealth Edison.

Inspired by the people ahead of him at Commonwealth Edison and driven by a desire to advance his career, he decided to enroll in law school in order to have a bigger impact on the industry.

Since graduating from Illinois Institute of Technology’s Chicago-Kent College of Law 25 years ago, Temple has been in both private practice and in-house positions in the nuclear power industry.

Temple has private practice experience as well. He was an associate and partner in the Chicago and Washington, D.C. offices of Winston & Strawn, Hopkins & Sutter and McGuireWoods.

If all goes according to plan, NuScale’s technology will create safer, carbon-free power at a cost that utility providers can afford to invest in.

“It’s new development,” Temple says. “It’s both evolutionary and revolutionary, in some regards, and so it’s rejuvenating an industry that otherwise some think is stagnant.”

The problem with most reactors is that they are so large and complex, utility companies cannot afford to purchase them. By keeping its technology small and its design fabrication and installation simple, NuScale hopes to change that.

NuScale is using as many existing technologies as possible to minimize the need for additional research and development, and, whenever possible, it’s opting for off-the-shelf items—including the containment materials, fuel assemblies and air-cooled steam turbine generators.

NuScale’s approach to plant construction is also unlike traditional large nuclear plant construction. The plant, and not just the reactor, is being designed to be factory-built and delivered as skid-mounted components to be assembled at the plant site. This approach will result in predictable construction schedules and less costly plants.

To bring this to fruition, NuScale relies on the support of the U.S. DOE and its primary investor Fluor Corporation, a multinational engineering and construction firm headquartered in Irving, Texas.

“We’re about $500 million into the development,” Temple says. “There’s probably another $300 million or so we must spend on standard plant design and another couple hundred million on other activities, so it’s certainly at least a billion dollar effort to bring one of these designs to maturity and actually be able to deploy it.”

The U.S. DOE provided a $217-million-grant, and the rest of the funding has come from Fluor.

“It’s a heavy lift for any company to make and that’s why we’re very pleased to have support from the U.S. Department of Energy [and Fluor],” Temple says.

It’s a heavy legal lift too, and that’s where Temple comes in.

“It’s all the normal things that keep company counsel busy on a day-to-day basis, but what caps it off is the technical and regulatory aspects of getting a design certified by the U.S. Nuclear Regulatory Commission,” he says.

In the meantime, Temple is kept busy with a mix of transactional work—overseeing potential supplier deals—and a certain level of business development. In November 2016, NuScale hosted a one-day, invitation-only event to tell more than 140 potential fabrication partners what it will be looking for and what its timeline will be when it begins releasing requests for proposals.

NuScale’s first customer will be the Utah Association Municipal Power System, which is preparing to build a NuScale plant in Idaho that Temple expects to be up and running in the mid-2020s.

“The good news is I think the backlog will grow very quickly,” he says. “A lot of customers, understandably, want to be able to kick the tires on a new car model in order to buy it. Think of what it took Tesla to get off the ground. It’s hard when you can’t tell people how many cup holders you’re going to have or how it’s going to work and they can’t see it, yet they’re going to buy something.”

NuScale does have a one-third scale prototype, but most customers want to see an operating plant. More than demonstrating the technology, customers will want to see that this can be cost-effectively deployed, Temple says.

NuScale is also trying to get in front of “nontraditional crowds” who have embraced renewable energy but not considered nuclear to be part of that category.

“We are getting traction from a lot of groups that recognize that the sun doesn’t shine all the time and the wind doesn’t blow all the time, and if you’re going to do something that doesn’t emit carbon, then nuclear is a reasonable way to do it,” Temple says. “It’s advanced technology, that’s really safe technology.”

NuScale is also getting interest from traditional utilities looking for an economic alternative to replace retiring coal plants.

There’s potential for this to be used for other steam applications, like desalinization, as well. Desalinization is a very energy-intensive process, and Temple says places like Saudi Arabia, which need water but don’t want to use fossil fuels to power desalinization, have been interested in nuclear technology.

“It’s fun as a lawyer to work on development projects, and particularly this one,” Temple says. “You have the same issues and headaches, and you’re looking at contracts and you’re dealing with counter parties, but [you have] a hand in doing something that’s progress for your company and progress for the country at large.”