No wonder Marcus Brown is energized. He’s executive vice president and general counsel of Entergy Corp., a Fortune 500 utility company transforming itself with a $10.4 billion capital investment plan designed to deliver electricity to its 2.9 million customers in the Gulf South more reliably, affordably and efficiently. 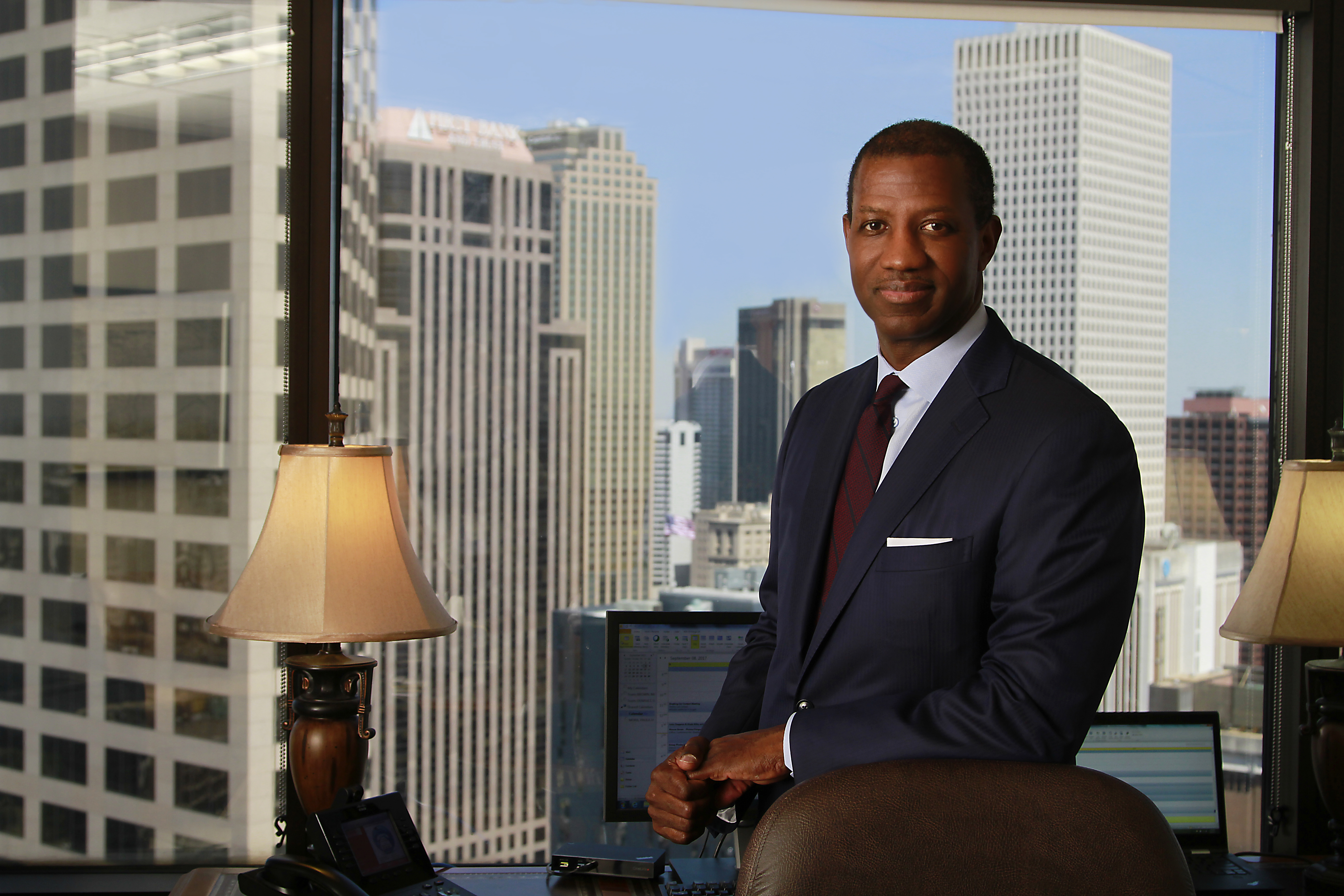 With annual revenues of approximately $10.8 billion and nearly 13,000 employees, the roots of this 104-year old company run deep in the communities it serves throughout Arkansas, Louisiana, Mississippi and Texas.

Brown’s title, however, doesn’t entirely capture the portfolio of his responsibilities. Aside from running an in-house legal, ethics and compliance department of 75 lawyers in 10 jurisdictional offices, he has recently taken on leadership responsibilities for corporate communications, federal policy and governmental affairs, cyber and physical security governance, and corporate social responsibility. It’s all part of a companywide effort to align critical service functions under a structure that better supports the long-term goals and objectives of the enterprise.

“It is an exciting time to be an employee at Entergy,” says Brown. “We are reshaping ourselves into a pure-play utility company with a modernized, enhanced and more durable grid to better meet the current and future needs of our customers.”

Such transformations can be challenging, and Brown sees his team’s role as ensuring that Entergy’s five operating companies have the necessary support services.

In March, when Entergy Chairman and CEO Leo P. Denault issued his annual letter to stakeholders, he noted that 2016 was a pivotal year, one in which the company announced plans to exit its merchant-power business in order to become a pure-play utility. He shared that the company will continue to transform its generation portfolio with investments in cleaner, more efficient generation to reduce costs for customers, improve the reliability of its network and increase environmental efficiency.

These investments also include enhancing the power grid and implementing advanced metering, which will enable operating efficiencies and faster outage response, while providing customers with better tools and information to manage their energy use. An ambitious agenda, to be sure, and one that entails an extensive to-do list for Brown. He embraces it with enthusiasm, but insists that his responsibilities aren’t just about the bottom line. 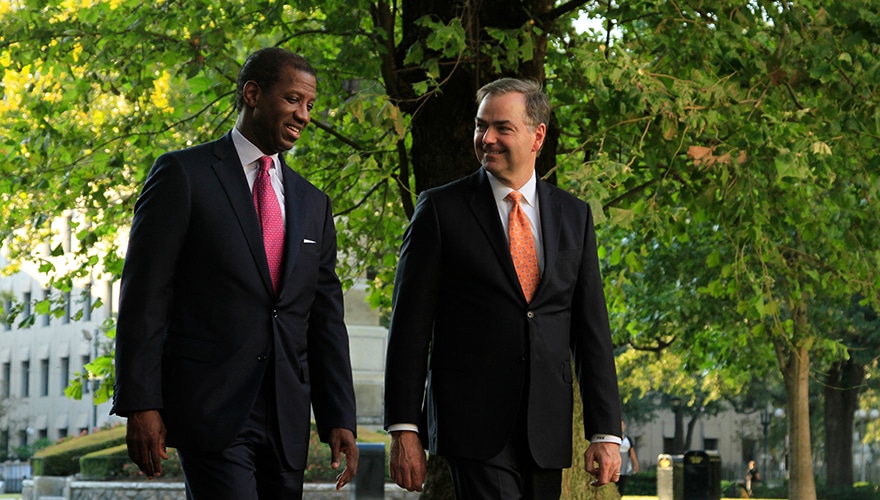 “Our company’s mission is clear and succinct,” he says. “We exist to operate a world-class energy business that creates sustainable value to our four stakeholders: our owners, customers, employees and the communities we serve. It is critical that we remain engaged with each of these groups so we can better understand their needs and perspectives, and by doing this, ideally, they will support what we’re trying to achieve as a company.”

Under Brown’s leadership, the company is refining its stakeholder engagement efforts in order to meet the goal of understanding and delivering the products and services that customers need today and will expect in the future. It’s an enterprise-wide outreach effort that facilitates dialogue among Entergy and its key stakeholders. Reluctant to take credit, Brown insists that his team is merely providing employees with more tools to use in their efforts to meet the evolving needs of customers.

“Our employees have worked very hard to establish strong relationships all across our service territories,” he says. “By coordinating those efforts and placing relationships at the core, we are able to maintain a constructive dialogue with all of our stakeholders regarding our strategy and goals, and make sure they align with the expectations of the people who rely on our products.”

Initial results are encouraging. Entergy has been investing in modern and more efficient power generation, including its St. Charles Power Station outside of New Orleans, followed by recently approved generation projects in Lake Charles, Louisiana, and Montgomery County, Texas. The company is also in the regulatory review process for additional projects in New Orleans and in Washington Parish, Louisiana.

Among the many benefits of building a more reliable portfolio of generation assets in its service territory—where customer rates are amongst the lowest in the nation—is the impact on new industry. The company sits in a hotbed of economic development and embraces its role in bringing new jobs to its communities. In 2016 Entergy was named one of the nation’s Top 10 utilities in economic development for the ninth year in a row, for its role in the creation of 4,800 jobs throughout its operating region.

Where the science becomes art is in the alignment of the many efforts put forth across the enterprise. You’ll find corporate giving and economic development integrated, creating maximized benefit for the communities that the company serves.

One example is from Entergy’s five-year, $5 million workforce development initiative that launched earlier this year. The company has committed grants totaling $2.2 million to 17 programs across the four-state service area that will help the region remain competitive and build a highly trained workforce for newly generated jobs.

This corporate funding is complemented by the efforts of employees whose community service hours are measured not in the hundreds, but in the thousands. This alliance of corporate giving and volunteerism to meet community needs and company objectives is a responsibility Brown champions.

“Our employees embrace taking on community leadership roles and it’s truly inspiring,” Brown says. “We have a first rate corporate social responsibility organization that encourages volunteerism and provides funding for programs that address critical needs in each of our communities.”

Entergy is an industry leader in social consciousness as well. Among its many recognitions, in 2016, Entergy was ranked 18th on Corporate Responsibility Magazine’s list of Most Responsible Companies and was the highest-ranking utility.

Starting in 2012, Brown restructured the legal department’s involvement in pro bono activities by partnering with community organizations and including a pro bono service component in the annual individual goals for each lawyer. Since then, the 75-member department provided over 8,000 hours of volunteer legal services, through the end of 2016. Recently, Brown took an additional progressive step by creating a full-time, on-staff attorney position to lead and manage the administrative responsibilities for all of the corporation’s pro bono legal activities. 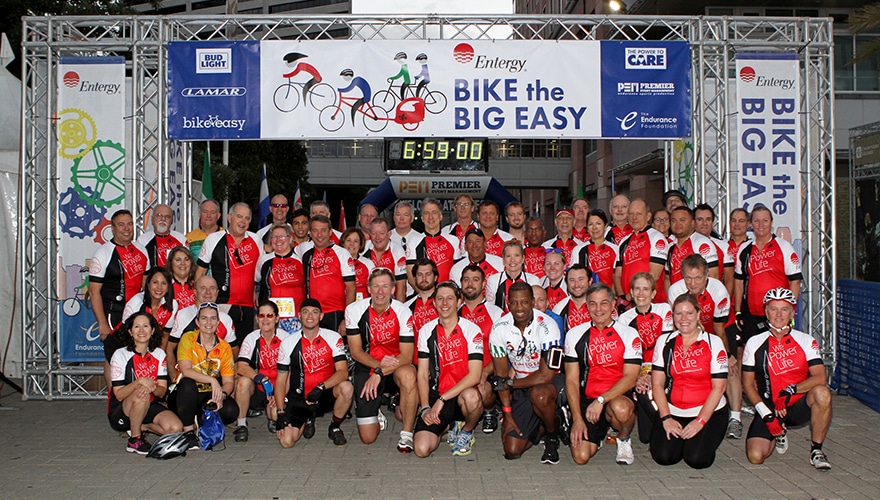 These initiatives have not gone unnoticed, with the Minority Corporate Counsel Association, the New Orleans Pro Bono Project and Corporate Counsel Magazine all having honored Entergy for its progressive legal practices. Additionally, Entergy received the prestigious Corporate Pro Bono Partner Award in 2016 for its role in supporting the Self Help Resource Center, which assists more than 5,000 low-income and vulnerable court litigants in the Greater New Orleans area each year.

“During a Pro Bono Institute conference, when we initially raised the idea of hiring a full-time lawyer to lead our pro bono program, we didn’t view this as something novel or unique,” Brown says. “We later found that very few companies were doing this: This has to change.”

When asked how he motivates his team to support such aspirational goals, Brown says, “We’re extremely focused on empowering our current employees, and bringing on new talent that understands the big picture of what Entergy is trying to accomplish and what it takes to get there. This takes diversity in experience, skillset and background to ensure we have a well-rounded department in place that is open to supporting the company’s top priorities—from growing the utility to investing in the very people we serve every day, our customers.”

Brown’s added responsibilities do not diminish his more traditional duties as general counsel, where he remains the company leader on regulatory, environmental, nuclear, transactional, litigation, employment, labor and benefits matters for Entergy Corporation and its five operating companies.

Despite his lengthy job description, Brown is quick to deflect praise, instead crediting the other capable leaders and talented Entergy employees on his team for keeping his full plate manageable. “I’m lucky to have an accomplished and capable lead team and a highly skilled group of business leaders across our enterprise who make my job easier.”