On this stone, he’s revitalized his faith

He’s in the twilight of a distinguished career, one that’s merged his twin passions of law and Christian faith. But one gets the sense that, come March 2024, Harold R. Loftin Jr. won’t really retire, just pass his position of the past decade to GuideStone’s next chief legal boss and begin a new chapter of life.

For a person of his faith, there’s always something more to do. The good word needs distribution, a charitable endeavor needs a boost, a legal cause dear to him needs his counsel. A seemingly spry 63, Loftin will likely also enjoy outdoor adventures far north of the Dallas area home he shares with Melanie, his wife of 38 years. 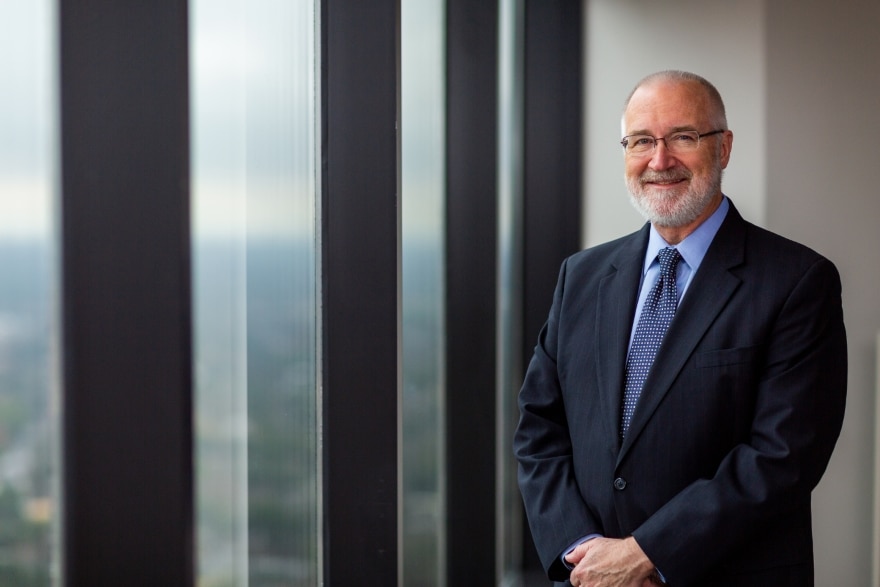 “Early on I wanted to be a fur trapper in Canada,” he chuckles to Vanguard this past fall. “Growing up around Houston, it was awfully hot and humid, and I read every Jack London book in the library.”

In time, however, “The Call of the Wild” and “White Fang” gave way to holy scripture and law books that, as Loftin reminds, are both about pursuing justice. Finally in 2013, six years after the death of his oldest son, Chris, and much soul-searching, Loftin was able to put aside his secular legal pursuits in favor of something more suited to his spiritual leanings.

That’s when he got a call from GuideStone, a faith-based benefits firm and mutual fund complex with a very specialized clientele of ministerial organizations that includes the Southern Baptist Convention and the Greater Evangelical community.

Let’s do lunch, the outgoing Chief Operating Officer John R. Jones beckoned Loftin, whose legal acumen and faith were well known in the Dallas/Fort Worth Christian community. GuideStone would need a revamped legal department to oversee its benefit programs and assets under management as it continued to expand. It also looked like contentious times ahead that called for a savvy litigator and, as it turned out, Loftin felt indebted to Jones and his colleagues.

“Sure, you paid for my law degree,” responded Loftin, noting that GuideStone at least indirectly factored in his graduating Baylor University School of Law in 1990.

Back then Melanie worked at the Annuity Board of the Southern Baptist Convention, now known as GuideStone Financial Resources of the Southern Baptist Convention. Four months of interviews followed before Loftin could resign his position at global heavyweight Dentons to be GuideStone’s associate counsel and simultaneously enroll in a master’s program in Christian Leadership at Dallas Theological Seminary.

A year later he was promoted to vice president, general counsel and secretary of the nonprofit and, yes, there have been some contentious times for GuideStone and faith-based entities in general.

As a health plan provider to like-minded ministries, GuideStone took exception to aspects of President Obama’s 2010 Affordable Care Act and its contraceptive services mandate. That, according to Loftin, was political overreach and encroachment on the First Amendment. Under his management, GuideStone for the first time sued the federal government.

With GuideStone joined by other faith-based entities, like the Little Sisters of the Poor, an expanded religious exemption—one that covered religious nonprofits and institutions as well as churches—was ordered by the Supreme Court in 2016 and ascertained one year later by the Trump administration.

“We sued to vindicate our right to provide a health plan consistent with our values and the values of those we serve,” Loftin says. “We prevailed on the merits, but there’s need to still be vigilant as the politicians and courts continue to address the prerogatives of faith-based organizations.”

Meanwhile, he says other aspects of GuideStone’s health plans are in full compliance with ACA as the network continues to address the persistent challenge of affordability.

His role hasn’t all been about church-vs.-state scenarios. GuideStone having over $18 billion in assets under management, he’s assembled a legal department to augment compliance infrastructure while advising on strategic matters. GuideStone’s primary objective, he emphasizes, is to create quality retirement and health programs for pastors, missionaries and others so they can focus on their ministries.

“Our goal is to take care of those folks who are taking care of communities,” he says. “From the back office, we’re serving the front lines of the ministries.” 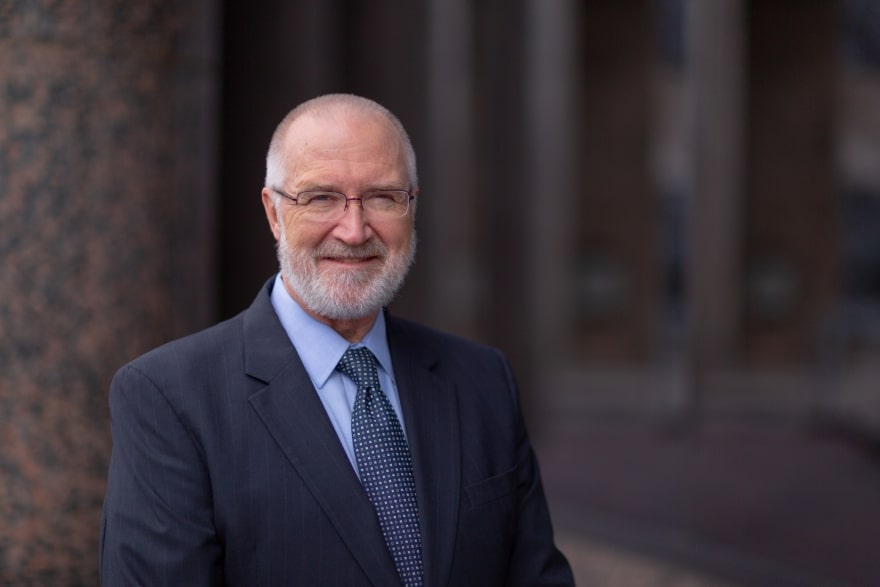 And he’s found it much more satisfying than his previous roles that included working for three firms and 11 years-plus as trial counsel with the U.S. Securities and Exchange Commission.

But that SEC gig from 2000 to 2011, sandwiched between partnership status at Jackson Walker and an of-counsel role at Dentons, did much to hone Loftin’s skills for GuideStone. Still, toward the end he was contemplating leaving law altogether and focusing on pastoral work. A parent never really overcomes the loss of a child, he says, and the pain of his son’s death in a 2007 auto accident remained intense.

GuideStone enabling Loftin to be, in a sense, pastor and lawyer, he says the opportunity to go there was literally heaven-sent. Now, as he wraps up his career, Loftin’s intent is on leaving a legacy for his successor.

He displays in his office a circle with a red line and fear in the middle. He believes in giving everyone under his wing the latitude to excel or fail, and should they fail, to accept responsibility and learn from failure.

“My dad taught me that a man must know how to talk,” Loftin says. “We can’t just be the department of no. If there are legal hurdles, find a strategy and be part of a team solution instead of providing bare advice.”

The trials and tribulations of his personal life notwithstanding, he says he has much to be thankful for, including his surviving son, 29-year-old Ben.

“We all have a journey,” Loftin says. “I now can look back and see how God put the broken pieces of a man back together. There I was with Dentons, one of the largest law firms, but I decided to spend what’s left of my life helping people understand God’s grace, compassion, and mercy and just deeply they are loved by the creator of the universe.” 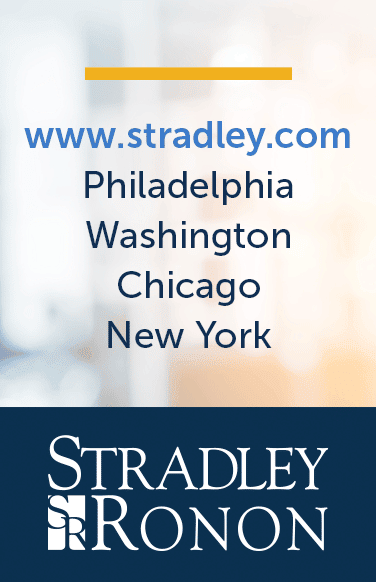 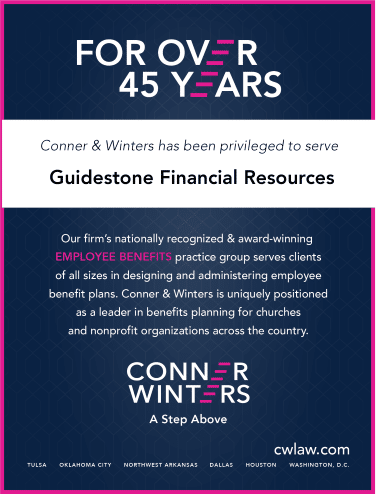 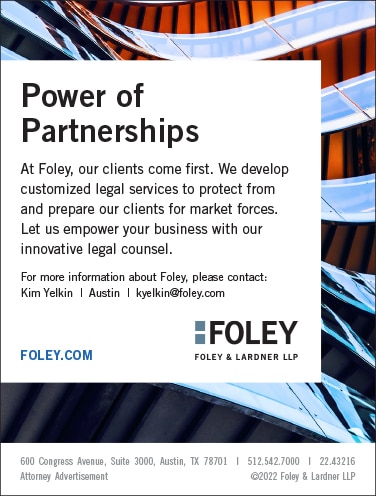 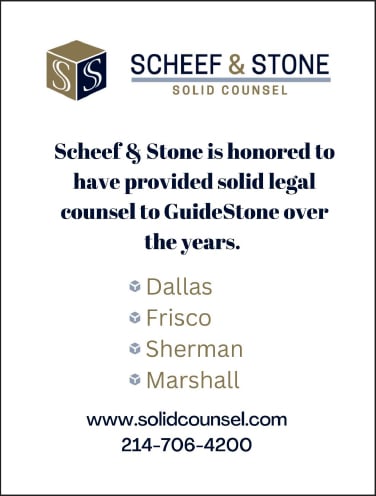