The blessing of billions

Grupo México, the third largest copper producer in the world, is investing billions of dollars in the three divisions, in its Mexican and Peruvian operations, and there’s a perk to growth in both countries—more than 8,000 jobs.

Gomez Aguilar, as the general counsel for the infrastructure division, says the targeted investment will not only generate thousands of jobs, but will also increase the production of the different goods and services that are generated in the divisions of Grupo. This will undoubtedly represent important challenges for the organization in all areas, including the legal area, but will also open the door to future opportunities. 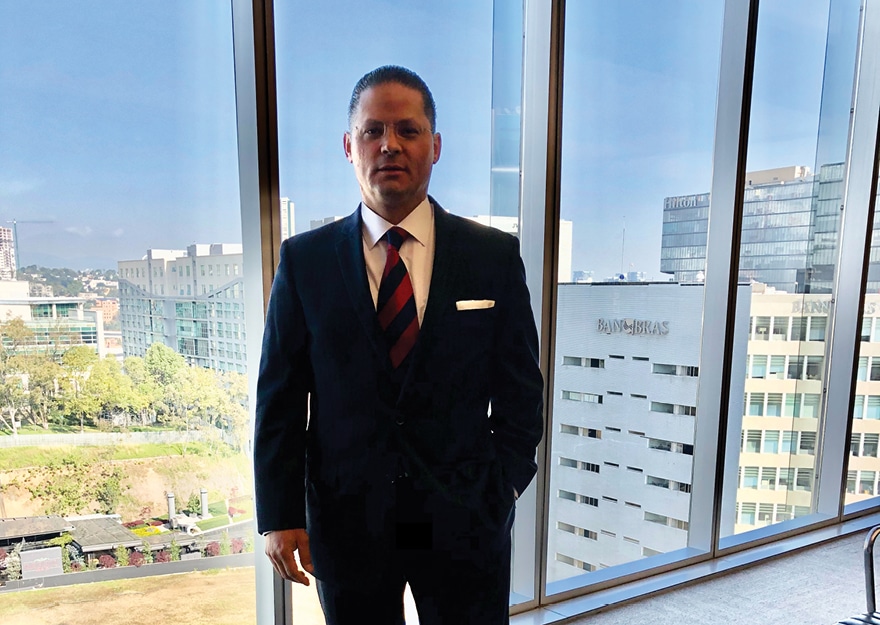 “It shows the company’s commitment not only to our country, but also to those where we operate,” Gomez Aguilar says. “We have a great deal of confidence in our operations and have our belief in generating opportunity and growth for Mexico’s economy and in those areas where we do business.”

Grupo México, as a leading producer of copper, has evolved its business in the last 80 years to include rail transport and infrastructure—all with a focus to benefit the communities where it operates.

In September, the mining division was issued a 30-year bond of $1 billion by Minera Mexico—a holding company for the Mexican mining operations—that will be invested in three projects in the state of Sonora. The Pilares project is expected to start in the second half of 2021; the Buenavista Zinc project in the second half of 2022; and the El Pilar project in the first half of 2023. The projects are  expected to significantly increase production—in the case of copper by 16 percent and in the case of zinc by 93 percent.

Last—but certainly not least—Grupo México’s infrastructure division got approvals in January of this year to invest up to $550 million in the next two years to construct two wind farms which will have the capacity to generate up to 368 megawatts. As part of the master plan, the investment will add to the country’s efforts at energy self-sufficiency. 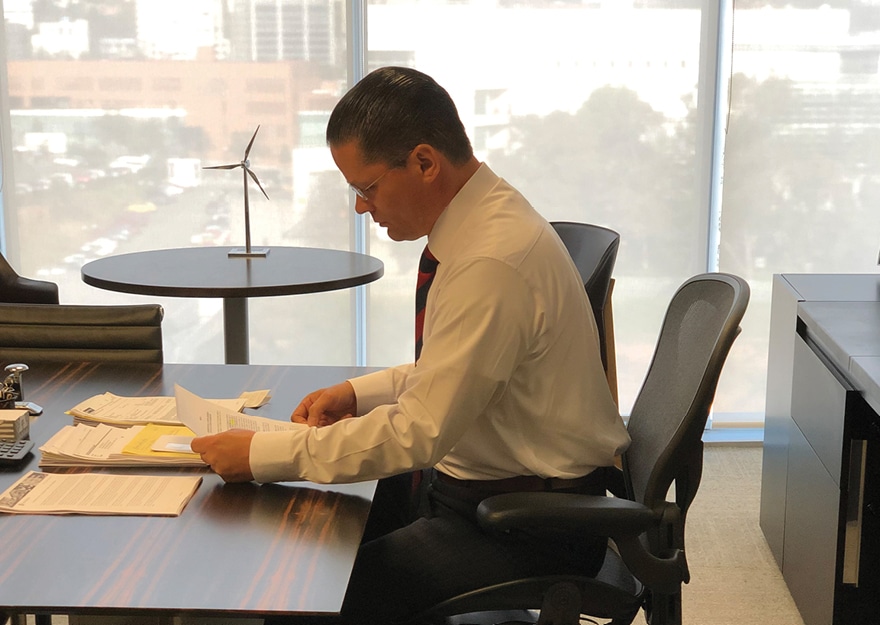 As Gomez Aguilar explains, an additional expenditure of $230 million related to this project will be used for two hydrocarbon storage terminals in Monterrey and Guadalajara. This will help to increase the inventory capacity of its regions in 7 and 15 days, respectively, providing greater guarantee and sufficiency of hydrocarbons in those regions. This will help to avoid fuel shortages in those areas, allowing people and industry to carry out their daily activities normally.

“The corporate governance model in Grupo México contributes to the sustainability of the company over time, displaying the trust investors have placed in our group that’s of benefit to all stakeholders,” Gomez Aguilar says. “The transparency and accountability ensure the proper functioning of the company and demonstrate our commitment to Mexico, generating jobs and developing continued economic growth for the country.”

In the last two years, the company has invested more than $120 million in social, health care and security projects. Some of the programs include the Dr. Vagón Health Train, which provides free medical care to people in vulnerable areas of Mexico; develops schools and provides equipment for the children of employees; constructs hospitals such as the Hospital de Especialidades in Juchitán, Oaxaca, to benefit 255,315 inhabitants affected by earthquakes; and has developed a nursery that produces five million trees annually.

“We seek to generate value and well-being for our collaborators, their families and the communities where we are present,” he says. “Moreover, we remain committed to preserving the environment because we know that this is the basis for responsible progress. To us, it guides us in our daily activities.”

Getting an A in advocacy

Drawn to the legal profession since high school, Gomez Aguilar’s educational choices were guided early on by his interest in and dedication to law.

To that end, he earned several degrees, first attending Universidad Marista in Mexico City, where he received his law degree in 1998. In 2005 he earned a master’s degree in business law at the Universidad Antionio de Nebrija (Madrid, Spain); in 2010 a master’s degree from the Top Management Program at IPADE (Instituto Panamericano de Alta Dirección de Empresa); as well as a diploma in administrative finance at the Universidad Anahuac Mexico Sur in 2012. 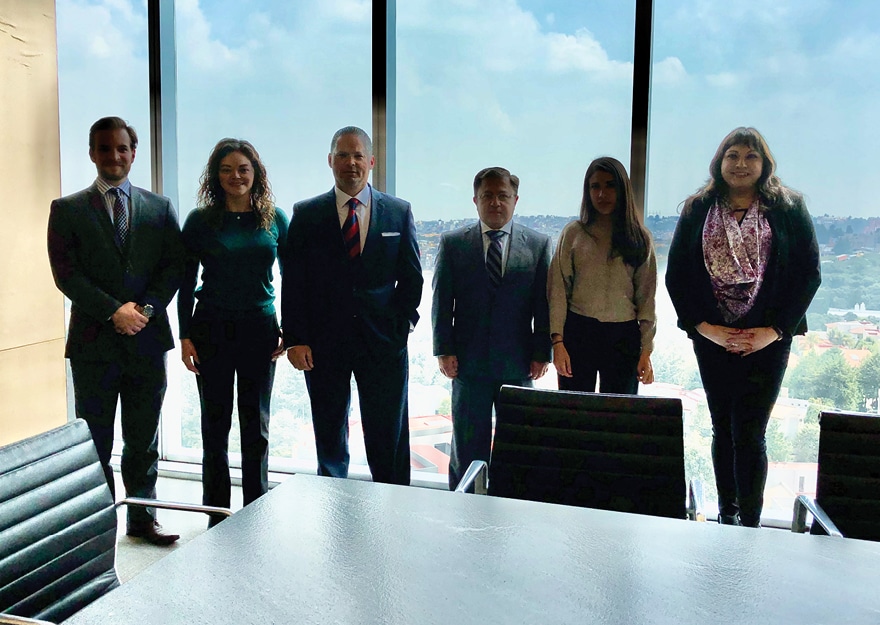 “Advocacy is undoubtedly a noble profession, and, in my case, I find it exciting,” he says. “A lawyer becomes that bridge between what should be, due to the aspirations that society raises, and what happens with those that take part in it.”

Coming to Grupo Mexico in 2005, he started as the legal assistant manager of corporate affairs and progressed to his current role in 2016. He not only oversees legal operations in the infrastructure division, but also in oil and gas production. Part of his job requires monitoring the legalities of offshore rigs, as well as two modular platforms, five mobile jack-up ocean rigs and land drilling equipment.

Also under his care is legal work related to electric power generation at La Caridad combined cycle plant in Sonora; El Retiro Wind Farm in Oaxaca; a construction company with more than 200 major infrastructure and industrial plants; an engineering firm; and operation and construction of the Salamanca-León highway and Silao Highway in the state of Guanajuato.

Clearly, it’s a job he relishes.

“The breadth of topics, operations and subjects that are involved, with the need of different skills that have to be developed is very interesting,” he says. “To advise and lead on the different issues and handle the challenges that arise, allows me to be an agent with vision. Using criteria that is useful and reliable for the organization’s decision-making ultimately insures its proper functioning.” 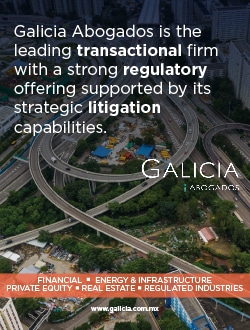 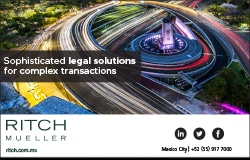