Perhaps her unconventional educational background has benefited Regan D. Fad in ways even she couldn’t have envisioned as an undergrad at The College of William & Mary during the 1990s. Not many students major in English and minor in chemistry, but Fad has never perceived these areas as exclusive.

“Chemistry is problem-solving, just like law,” she says. “English is about persuasive expression. The law is that too.”

For the better part of eight years at Teneo, Fad has had to use both skill sets. That hasn’t been easy, given the complexity of her role as deputy general counsel of a dynamic multinational firm. 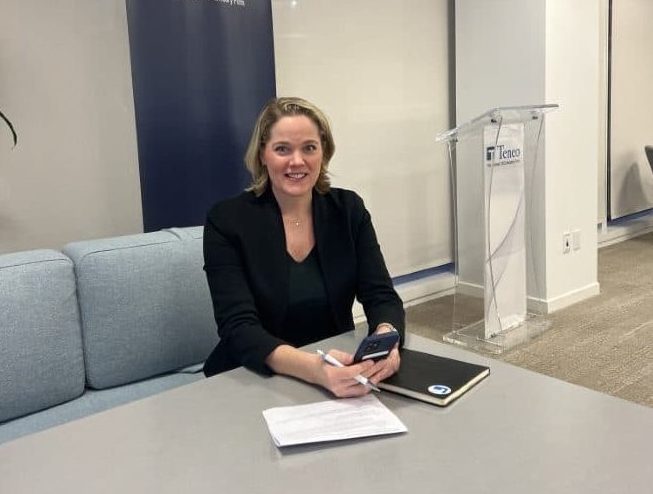 How much has changed since 2015, she says, when Teneo was primarily a Manhattan-headquartered strategic communications and consulting specialist that had only been in business for four years. While it still provides those services, it’s expanded into a financial advisory with big-ticket clientele, growing through acquisitions, establishing satellites in Europe and Canada, and selling a majority stake in 2019 to Luxembourg private equity firm CVC Capital Partners.

That’s had Fad tending to integration and ensuring Teneo complies with rules and regulations in multiple jurisdictions.

“It’s an ever-changing role because the business keeps evolving and growing,” she tells Vanguard in October. “What was very important from a legal perspective for the business in 2018 is different from what’s important now as the company keeps shifting.”

Among those recent shifts was Teneo’s June 2021 acquisition of the restructuring services unit of another global professional services firm, Deloitte UK of London. That brought more than 250 accomplished professionals into the fold. It also gave the firm expertise in restructuring distressed companies, which Fad says complements Teneo in areas such as management consulting, risk management, communications, executive search, and investor and public relations.

Fad had hoped to be in London early this year for a post-acquisition trip, but the omicron virus kept her stateside. From afar she still was able to help integrate Teneo’s new partner with the help of her overseas counterparts.

“They’re UK and I am not able to give legal advice on UK law, but I do advise this business with respect to U.S. law considerations and did update risk management processes and procedures,” she says. “We worked out the kinks of the businesses overlapping and harnessed synergies.” 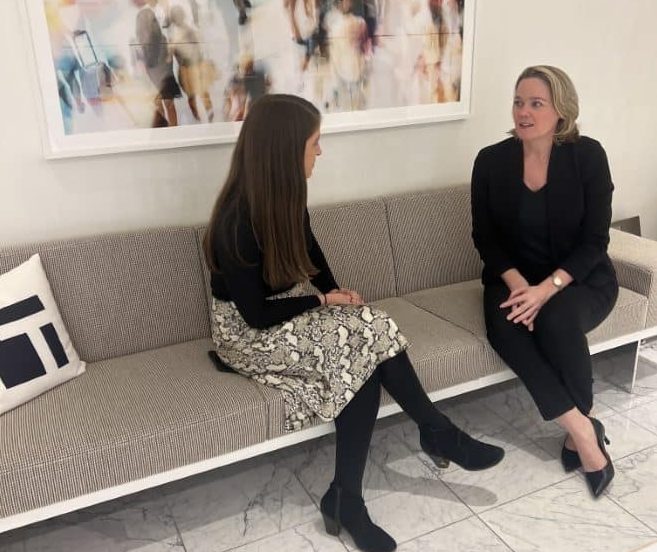 The same holds true for Teneo’s other recent acquisitions. In 2022, it purchased the restructuring business of KPMG in the Cayman and British Virgin Islands. The same year it acquired WestExec Advisors, the Washington, D.C.-based strategy and communications firm. Those transactions followed several acquisitions from the prior year and, in 2019, Teneo itself being acquired by CVC.

Each transaction presents its own unique issues, Fad says. For instance, when Teneo acquired KPMG’s Virgin Island based restructuring businesses, its new partner reached out to Fad and a compliance colleague to establish the internal infrastructure needed up so it could take on representation of the first cryptocurrency bankruptcy proceeding.

And there should be more such complexities for, as Fad explains, Teneo is committed to growing its financial advisory services in new jurisdictions.

“That’ll be the ongoing focus for the legal and risk teams as Teneo continues to grow the business,” she says. “But over my seven-year tenure, despite market hiccups, COVID-19 and what have you, Teneo has kept on growing.”

Fad had wanted an in-house role since her early years as an associate at Cahill Gordon & Reindel following her 2002 graduation from New York University School of Law. She garnered much experience at the New York-headquartered firm where she immersed herself in complex transactions with a focus on high-yield bonds and debt financing.

That, she says, prepared her to be a U.S. legal associate for Clifford Chance, a member of London’s so-called “Magic Circle” of multinational law firms. Upon her arrival in London in 2006, Fad initially helped the firm build a European high-yield bond practice. When markets crashed two years later, she shifted to more traditional securities law advisory work.

She went in-house in February 2011 as director of legal and compliance with UBS Investment Bank in New York, the only lawyer in charge of serving the leveraged capital markets group. Four years later Fad joined Teneo, which she deems the most consequential role of her two decades of mixing law and high finance. 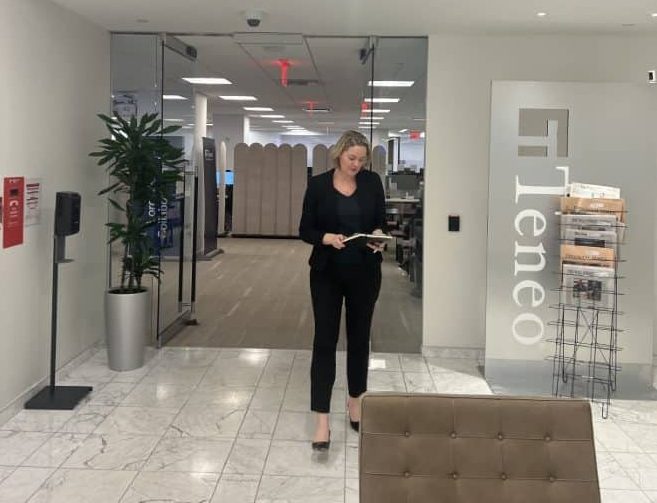 The law had long appealed to Fad, who spent two years as a paralegal between graduating William & and Mary and enrolling at NYU School of Law. It’s not her only interest, however: The long-ago English major never lost her love for a good story.

She enjoys writing fiction as a hobby—“though I suffer from the hobbyist’s curse, I never finish anything”—and participates in workshops to keep her works-in-progress progressing. She acquits herself in a Youtube clip of a reading of a section of one of those works—young-adult piece about youthful insecurity and blended families. In Fad’s tale, one family is human and the other is—spoiler alert—mermaids.

Fiction writing is among her ways of staying mentally tuned as well as a diversion.

“One of my favorite aspects of the practice of law is the distillation of complex ideas into crisp language,” she says. “Creative writing lets you attempt do the same, but with fewer guardrails.”

Law and finance, after all, are no places for shrinking violets. Fad has performed well under pressure these past 20 years at firms and in-house. Home life has been fulfilling too, Fad being married to Robert Boland, a professor of sports law at Seton Hall Law and a practicing sports lawyer.

An writer himself, Boland mentions in an essay how when his first marriage was ending, he could empathize with troubled pitcher Matt Harvey, who was battling substance abuse and legal issues. Then Boland and Fad met when the New York Mets and Kansas City Royals were playing in the 2015 World Series and, coincidentally, Harvey being feted as Major League Baseball’s Comeback Player of the Year. 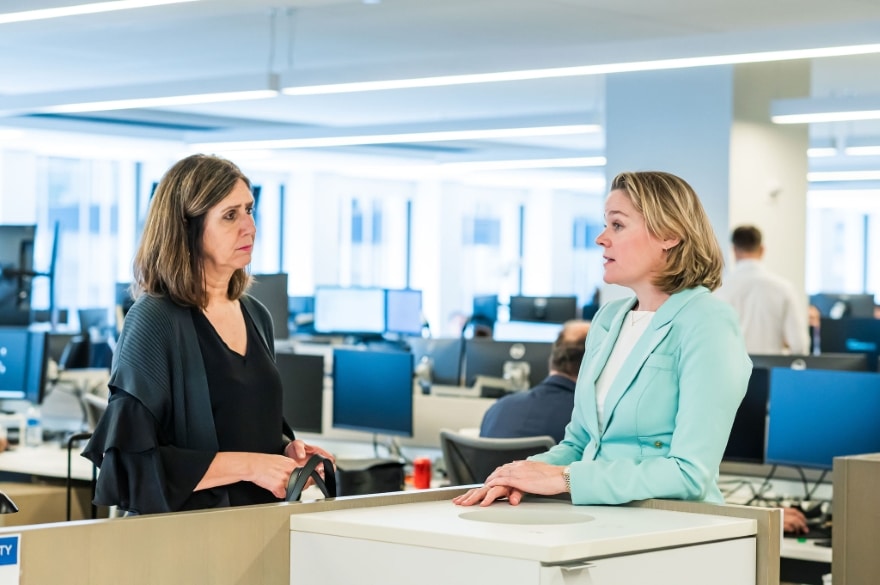 A happy ending for Boland and Fad, which might have been happier had the Mets not lost the Fall Classic in five games. But, as Fad reminds, one’s got to persevere whether it’s law, business, baseball or whatever.

Much as she’s assisted in Teneo’s growth since 2015, there’ll always be much more to do. Or, as is said in baseball, you play every day.

“Any time we think we’re done with something, there’s a new area for which to familiarize,” Fad says. “Issues don’t necessarily revolve or finish – especially with an evolving business.  The legal issues evolve with it, and we have to be ready for that.” 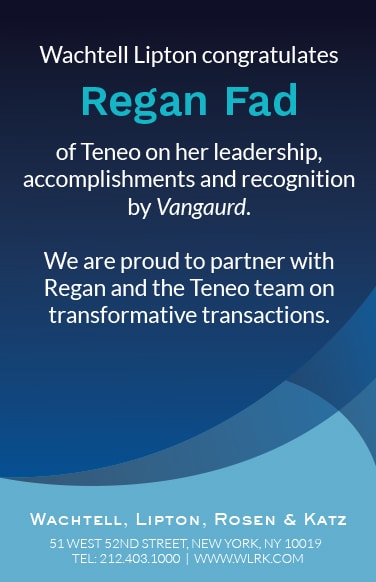 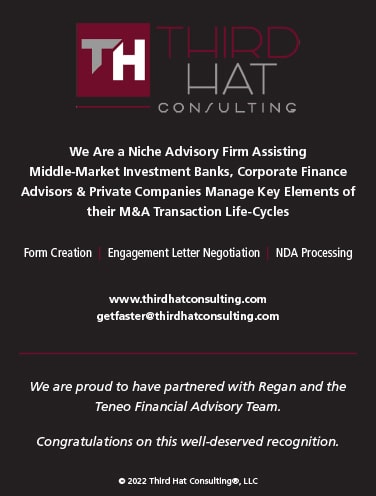