Ask Tina R. Patel who her clients are and she’ll tell you “the kids,” all 35,000 of them. Then, she’ll pause, take a breath, and list all her other clients: the Superintendent of Schools, Dr. Jose L. Parra; the board of trustees, the campus principals, the teachers and the executive cabinet.

Patel is the chief legal counsel for Irving Independent School District (IISD) in Texas. Hers is not the biggest school district, but it’s big enough. There are around 4,500 staff members—2,456 of which are teachers. That’s more than enough clients for Patel and the other attorney and administrative assistant who work for the in-house legal team, though Patel, given the volume of legal work, at times relies on outside counsel. 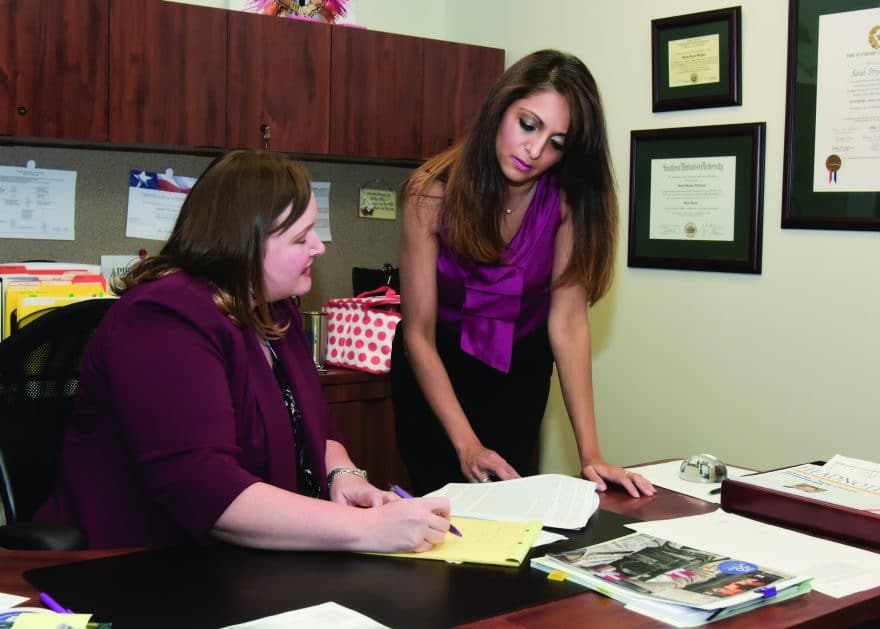 “I wear so many different hats here,” she says. “On any given day, I might be counselling our special education department on how to implement recent legislation requiring Texas schools to install video surveillance equipment in special education classrooms; I might consult with our head of facilities on the location of election signs on school property and use of school buildings as polling locations for the upcoming election, or review a contract for graduation venues for next spring.”

She says her goal is for the campuses to view the legal department as an ally, not the place they turn to for damage control or avoid altogether. In order for that to happen, and even though it won’t happen overnight, Patel says her office and the campus administration must collaborate and be proactive.

While Patel credits those around her—the district’s board of trustees, for instance, which is often in agreement, rarely entering into the counter-productive spats that divide many school boards—she’s undeniably had an impact.

Case in point: About a year into Patel’s role at Irving ISD, the district’s chief financial officer (CFO) and superintendent came to Patel with a plan to add $50 million to the district’s budget over five years. It would involve complicated legal work, and the superintendent and CFO would need to convince the board and ultimately the tax payers that, even though the plan would appear to raise taxes, it wouldn’t.

In its first year of increased funding, the district will give its teachers and their support staff a long overdue raise.

“It is important that our teachers understand that we value them and appreciate them, which will ultimately yield a stronger commitment by our teachers towards their students,” Patel says.

“No matter who you speak to in the executive cabinet, they would all say their function is to support the campus principals, teachers and campus staff, so they can do what they need to do for the kids,” Patel says. “Whatever we can do to support our teachers and administrators, whether it’s raises, equipment, training or an opportunity to voice their concerns and share their ideas openly, that’s our priority because the teachers are going to make or break the school district.”

Patel helps that mission in many ways, not just through finding money for raises.

For instance, in order to help the district better understand student and parent needs, throughout the year Irving ISD conducts parent and student surveys to evaluate teachers. The results of the surveys are critical in helping the district identify problem areas, assess what programs and tools are working and, most importantly, give the district the opportunity to allocate resources where they are most needed.

As a result of this and other efforts, Irving ISD stands out among other districts in Texas.  The district is notable for graduating its first class of dual language students in 2016.

Further, Irving was named an AP District of the Year—a result of expanding access to AP courses and improving AP Exam performance, meaning high school students can earn college credit before they graduate

Since Patel joined Irving ISD, she’s developed a reputation for facing challenges directly, and as much as possible, personally.

In her first year at Irving ISD, Patel stood up at the end of a principals’ meeting and asked if anyone had questions for the attorney. Sixteen hands shot up.

The questions ranged from complicated custody and personnel issues to simple questions regarding enrollment documentation. Principals often find themselves having to interpret child custody orders and mediate family disputes during dismissal time relative to which parent has the right to take the child home from school, Patel says.

The personnel questions centered on how to implement the local performance evaluation tool and how best to address and document teacher growth, poor performance and understanding teacher contract rights.

To address recurring custody issues, Patel developed a training program using the same custody orders that the principals come across, highlighted the key terms and explained them in laymen’s terms, so principals could then better explain to the parents the meanings of the various custody order provisions.

Patel has partnered with the human resources department and helped organize the very first Human Resources Academy, which helps train principals on various personnel issues and the nuances of some of the recurring issues they face as administrators.

It gives them confidence that they are supported by Patel and the human resources department says Patel, who is in the process of developing a monthly Q&A session with the principals so she can further assess their needs and provide answers in real time.

Patel’s determination to support Irving ISD’s students and teachers goes back to her childhood education.

Patel emigrated from London to the U.S. when she was 12 years old. Even though she graduated at the top of her high school class and was accepted to Virginia Tech, she had to spend her first year taking remedial courses to catch up with her peers at the university.

“That’s when I realized the impact it will have on somebody’s entire life if, at such a young age, they’re unfortunate to experience, even if it’s just one semester or one year, having bad teachers,” she says. “That just carries with the child into adulthood, and they’re always starting just a few steps behind their peers.”

Patel, who earned her bachelor’s in business administration at Virginia Tech, didn’t initially plan on attending law school, but when she realized how much she enjoyed helping people understand their legal rights, she enrolled in George Washington University’s law program. She spent years with litigation, corporate and international law firms in Texas and New York but found she enjoyed government and education cases most. That led her to an in-house counsel job with Dallas ISD and later with Irving ISD.

“I stumbled upon my dream job and I am thankful every day,” Patel says.

Now she spends most of her days in meetings and works late into the night—to the point that her boss has taken to escorting her out of the building at 6:30 p.m.—but she says her unending motivation to support the students makes that workload bearable.