Thomas G. Siciliano never expected to see his name in the index of a textbook, and when he joined Municipal Credit Union (MCU) as general counsel at the age of 27, he never expected he’d stay there for 35 years.

When he interviewed for the job as general counsel, just a couple years out of law school, he told MCU, “I’m really just a kid,” but the credit union was looking for someone younger who would grow with the organization.

As MCU grew its assets from $90 million to $2.5 billion and its membership grew to 400,000, Siciliano built the legal department from scratch and supported MCU through more than three decades of change. 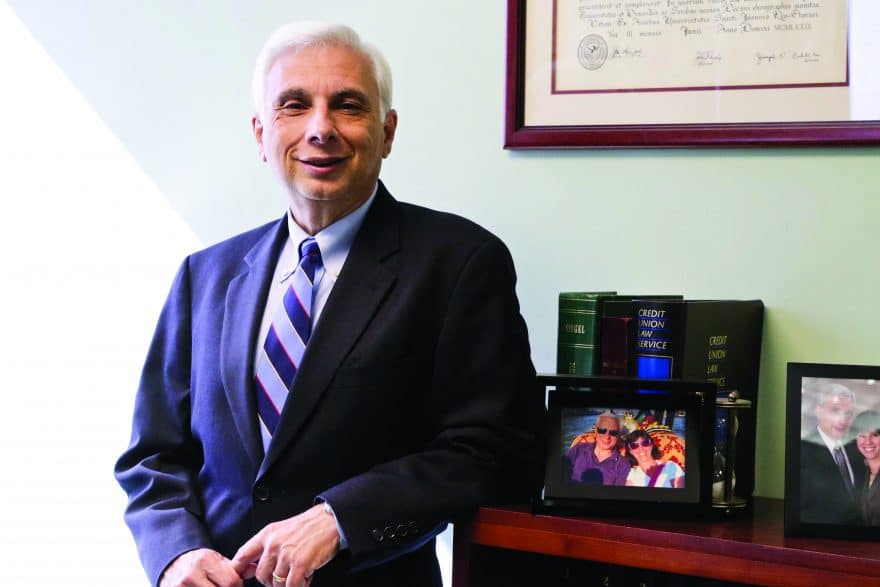 “I’m really proud of how we have grown a successful, thriving business, but we’ve done it by helping people and not just selling to people,” Siciliano says.

That commitment to helping people is what got Siciliano’s name cited, after 9-11, in a text book about ethics and morals. In the book, MCU’s approach to serving its members was used as a contrast to those who do wrong for profit.

Siciliano used to have views of the World Trade Center’s plaza. In the summer, music from daily concerts would drift up to his 27th-floor office. “It was really very beautiful,” he says.

When the towers collapsed, debris damaged MCU’s building and all of its IT systems went down. MCU’s members could still withdraw money from ATMs, but MCU couldn’t verify account balances. There were a significant number of cases, some by mistake, where members withdrew more money than they had available in their accounts.

“Considering what was going on in New York City at that time, the credit union made a decision that the members needed easy access to their money,” Siciliano says. “It was a very bad time for everyone involved, and the credit union decided to keep its ATM system working to allow people to withdraw money, basically on a trust basis.”

MCU also forgave any uninsured loans, including mortgages, that belonged to police and firefighters who died on 9-11. Siciliano says that willingness to help members has accelerated MCU’s growth and is indicative of MCU’s high level of morality and commitment to social responsibility.

Since 9-11, MCU’s assets have more than doubled and the credit union has gained 115,000 members. It has also helped members during other disasters, such as Hurricane Sandy, when many of the members’ homes, on which MCU held mortgages, suffered extensive damage.

“We were in no rush to foreclose on anyone if they couldn’t pay their mortgage,” Siciliano says. “We worked with people, and by working together we were able to make their lives a little easier. We’ve found that maintaining a high level of social responsibility in dealing with our members has not only benefited those members but has added to the profitability and strength of the credit union.”

MCU has a strong reputation among its membership. For example, when New York City police cadets attend the police academy, sergeants sometimes pull them aside and tell them to join the credit union. MCU knows these cadets don’t have much money starting out and offers assistance like loans to purchase their uniforms.

“We attempt to help all members, not just the cadets, when they’re young or when they need help,” Siciliano says. “What we’ve found is that when their financial condition improves and they need a mortgage, or they want to buy a car, they come back.”

Because Siciliano has been at MCU for 35 years, he has seen members transition through life’s phases, and he says MCU has a bit of a small-town feel despite being in the middle of the Financial District of downtown Manhattan. Internally, MCU has a similar feel. Much of MCU’s senior management team has been together for over 30 years.

“We’ve reached the point that members of senior management that came to my wedding will now be attending my oldest daughter’s upcoming wedding,” he says.

“We’ve reached the point that members of senior management that came to my wedding will now be attending my oldest daughter’s upcoming wedding.” – Thomas G. Siciliano, Municipal Credit Union

“Truthfully we were both young and just a few years out of law school,” Siciliano says of himself and Veltre. “There were times when we would work on one project together because we had never worked on a matter of that nature before, but we both worked hard and learned.”

After graduating from St. John’s University Law School, Siciliano worked at a small law firm on Long Island. In the mornings he’d be in court, by noon he’d be working on commercial leases, and late in the day he would be handling business organization issues. He had an office, but the attorney he worked for would often say, “What are you doing in your office? Come in my office and work with me.” Occasionally Siciliano would just sit and watch what that attorney did.

“When I think about it now, it probably wasn’t the most profitable way to use my services, but I sure did learn a lot,” Siciliano says. “I will always be grateful for that experience and the mentoring that I received.”

That background was enough to get Siciliano the job at MCU, and today Siciliano takes pride in helping attorneys grow, too.

“We try to give the attorneys who have worked for us a broad range of experience and make them well rounded lawyers,” he says. “They’re not just handling one type of matter, but they can pick up files from various fields and competently work on them.”