At the wheel for facilities oversight

It seemed a match made in racing heaven, NASCAR absorbing the International Speedway Corporation in a $2 billion transaction in October 2019.

“A historic moment for our sport,” Chairman and CEO Jim France proclaimed, one that delisted ISC from Nasdaq and put it and its 13 tracks under NASCAR’s private ownership. Likely, the transaction paved the way for more sponsorships and simplified scheduling. 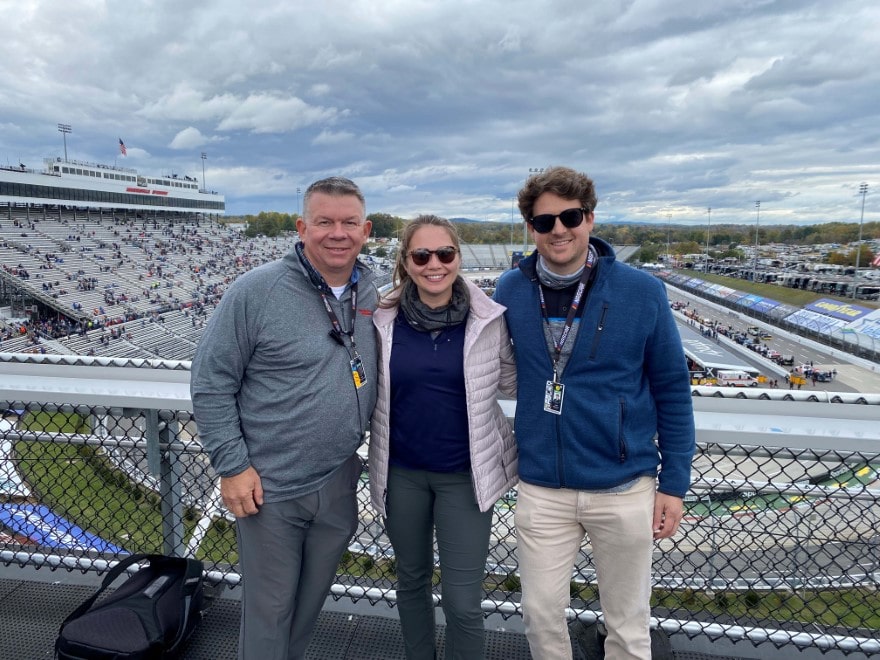 A pivotal moment in his career, Micallef thought, though at the time he couldn’t have realized just how so. The ensuing months would pose unprecedented challenges for stock car racing, as they did for every other sport.

“Just as I’m beginning to learn the job, the players and the new operating structure, COVID-19 hits and our season gets postponed without a clear path back,” the now 34-year-old Micallef tells Vanguard this past October from Daytona Beach, Florida.

NASCAR still managed to beat the other leagues in bringing back the fans, and that took some doing from Micallef and his direct reports, Kelsey Copeland and Kori Jessel, corporate counsel and contract manager, respectively.

The racing on hold, Micallef and colleagues conferred with doctors, state officials and other experts to develop protocols to resume competition. The spectator side his primary focus, he ensured NASCAR’s policies didn’t conflict with regulations set forth by the Americans with Disabilities Act or OSHA regulations.

He also oversaw the writing for event signage and the wording of public address announcements and spent hundreds of hours reviewing existing agreements to determine how a pandemic would alter their interpretation and impact the league and venues’ operations.

On May 17, 2020—just over two months since NASCAR’s postponement—competition resumed at Darlington, South Carolina, with Kevin Harvick claiming his 50th career victory, albeit without anyone cheering him on. Drivers and crew passed multiple health checkpoints, their temperatures taken and masks and gloves the rules of the day. 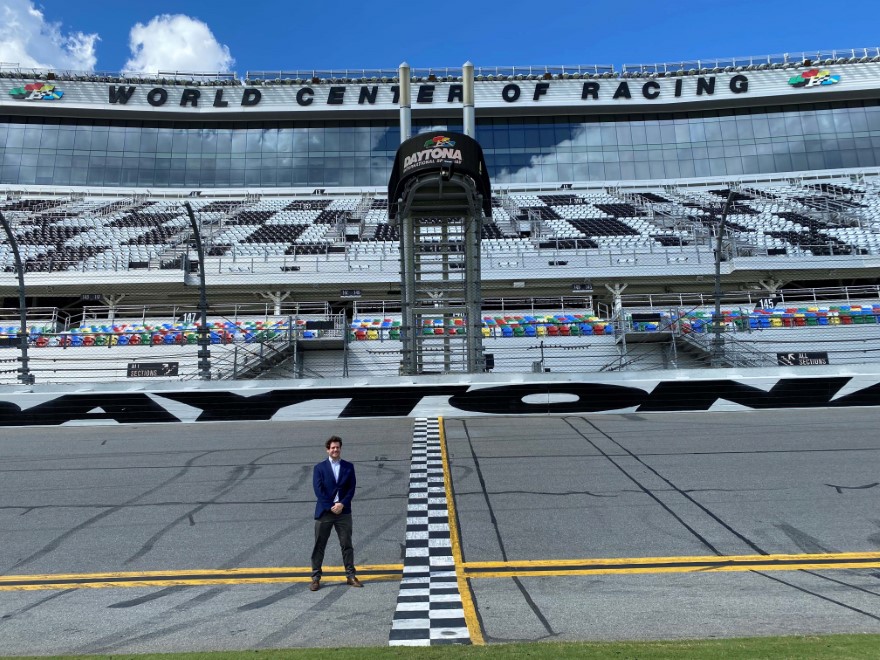 Less than a month later, a limited but distinguished group of fans was allowed at Homestead-Miami Speedway, the 46,000-seat venue reserved for 1,000 military members who saw Denny Hamlin prevail over Chase Elliott in the NASCAR Cup Series Dixie Vodka 400.

Days later, 5,000 fans were allowed to watch Ryan Blaney win Race 13 at the 80,000-seat in Talladega Superspeedway in Alabama. That race also marked NASCAR’s banning of the Confederate flag amid the social unrest and upheaval that followed the death of George Floyd in Minnesota. Micallef and his team helped author the policy and were on premises to assist in its enforcement.

“There were no major incidents and only a few flags that actually had to be confiscated,” he recalls. “But it was just another unexpected element of the 2020 season where we had to operate without an existing playbook.”

Another step toward normalcy was last February’s Daytona 500, where 30,000 fans—the most at any sporting event since COVID-19—saw underdog Mike McDowell score his first Cup Series race after Team Penske teammates Joey Logano and Brad Keselowski crashed while vying for the lead in the final lap.

Finally, in August, capacity limits at the 100,000-plus Daytona International Speedway were lifted for the Coke Zero Sugar 400 race. Blaney won in overtime and under caution, a last-lap wreck adding to the excitement.

Normalcy back at NASCAR

So, for the most part, it’s back to normalcy at the NASCAR tracks, which should keep Micallef and his small team busy. It’s not all about the racing, though, his responsibilities including overseeing year-round operations and other events at the tracks. Real estate development also falls under his purview, and NASCAR has properties nationwide that might be due for renovations.

At Daytona Beach headquarters, which overlooks the famous track, there’s a mixed-use development on the other side, with hotels, apartments, entertainment, restaurants and retail that includes a Bass Pro Shops. Sports leagues as a rule looking to optimize potential of their real estate, NASCAR is no different, and the more the amenities, the more fulfilling experience for the fan.

And for Micallef, sports law of any sort is a dream job, one he moved into without having to cut his teeth in private practice. He’ll concede some luck was involved, but still made the most of his breaks. 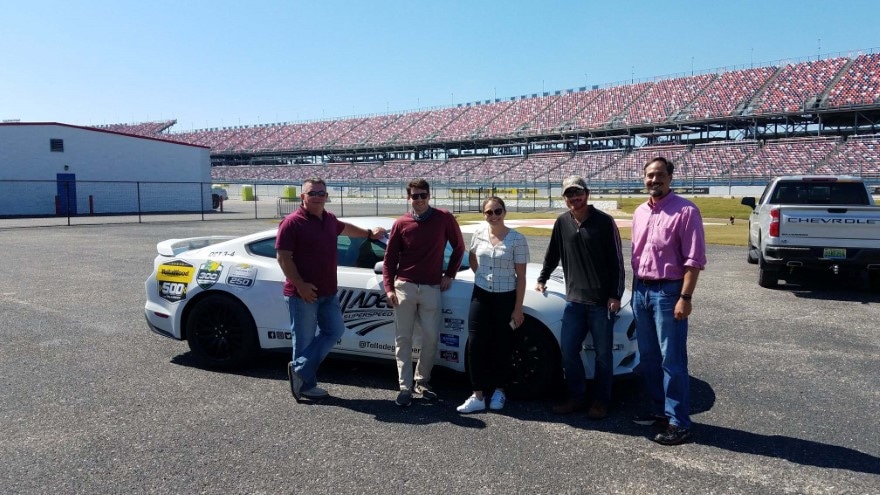 Micallef having responded to NASCAR posting for an internship while in his second year of law school, he was selected at what proved a most opportune time, for the company was in the mist of acquiring the American Le Mans Series in the summer of 2012. His due diligence and attitude apparently impressing Chief Legal Officer Gary Crotty and former General Counsel Karen Leetzow, Leetzow reached out to him one year later with the news that an in-house lawyer had left and here was his chance to join the team.

Micallef having just taken the bar exam, he wouldn’t know until afterward that he’d passed. Anxiety over that notwithstanding, he didn’t think twice about the offer.

“I didn’t even try to negotiate salary or benefits,” he says with a laugh. “I said ‘yes’ so quickly that they didn’t have a chance to say ‘no.’”

It’s been nine years-plus of personal and professional growth, with Micallef’s early roles contributing to acquisitions that included the Automobile Racing Club of America, a Midwest-based sanctioning body for stock car racing, and tracks in Atlanta, Iowa and Sebring, Florida. Fast forward to the ISC transaction and it would be a new and greater role he relishes.

“Every day isn’t the perfect day but this is still a job thousands of attorneys would die for,” he says. “I’ve never contemplated leaving. Sports law is the cherry on top of the sundae.” 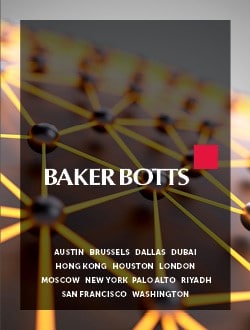 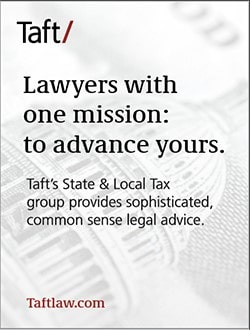