Just whom the doctor ordered

As Regional Cancer Care Associates, one of the nation’s largest cancer care networks, began celebrating its fifth year of success in 2016, an ambitious agenda was being readied.

At the time, RCCA’s only in-house attorney, Terrill Jordan, was promoted to president and CEO and a search commenced for his legal successor. The ideal candidate would not only be well-versed in applicable legal matters and corporate transactions, but also the nuances of an oncology and hematology practice. 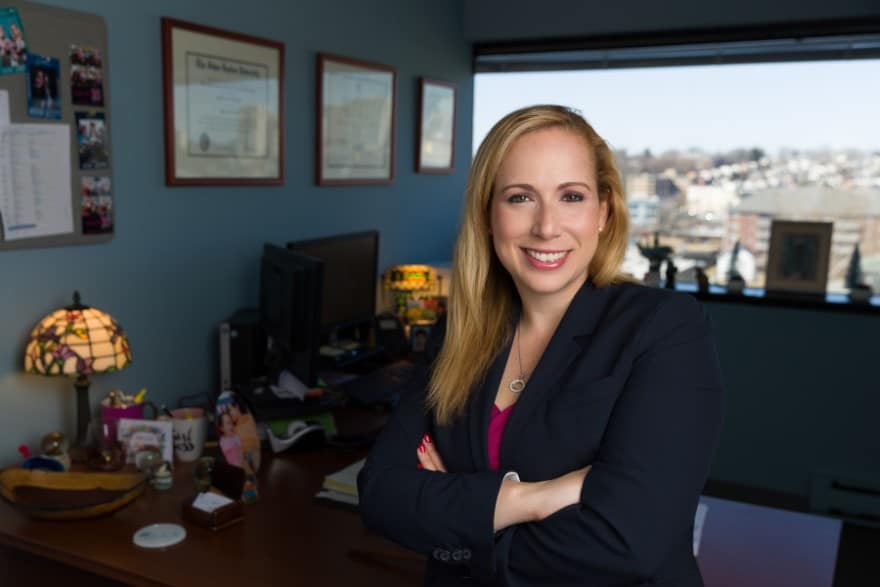 “That’s how this job found me,” says Alizah Diamond, who joined RCCA as corporate counsel in April 2016 and in November 2019 was promoted to general counsel. “At the time the recruiter reached out to me, practicing in a health care setting wasn’t in my anticipated career path. However, the recruiter urged me to apply for the position because of my ‘personal’ background in oncology which helped me develop a fundamental understanding of what RCCA and its physicians were trying to accomplish.”

Coming from a family of oncologists, Diamond leaned toward going into medicine, specifically oncology, as an undergrad at Johns Hopkins University, but ultimately found her passion for the law at Georgetown Law Center.

Upon earning her law degree in 2005, Diamond practiced litigation and labor and employment law with Hodes, Ulman, Pessin & Katz in the Baltimore area for almost two years, then served a similar role at Schnader, Harrison, Segal & Lewis LLP in New York City from 2007 to 2016 where she also branched out into corporate law.

Four years after joining RCCA in April 2016, Diamond continues to function as a one-woman legal team for the organization which has more than 30 locations throughout New Jersey, Connecticut, Maryland, Pennsylvania and the Washington, D.C., area, playing a major role in RCCA’s expansion endeavors in the mid-Atlantic and New England regions.

After 11 years at private law firms, Diamond was welcomed aboard at RCCA and immediately handed an extensive to-do list.

If RCCA was to succeed as one of the nation’s largest independently-owned cancer care networks, it would need an updated business model that afforded it the agility to participate in evolving comprehensive reimbursement programs that increasingly focused on the overall “value” of patient care. That had Diamond restructuring the organization, within only the first few months of joining, into a group of RCCA entities that included two clinical practice entities, a management services organization and an asset holding company, collectively owned by the same group of physicians. 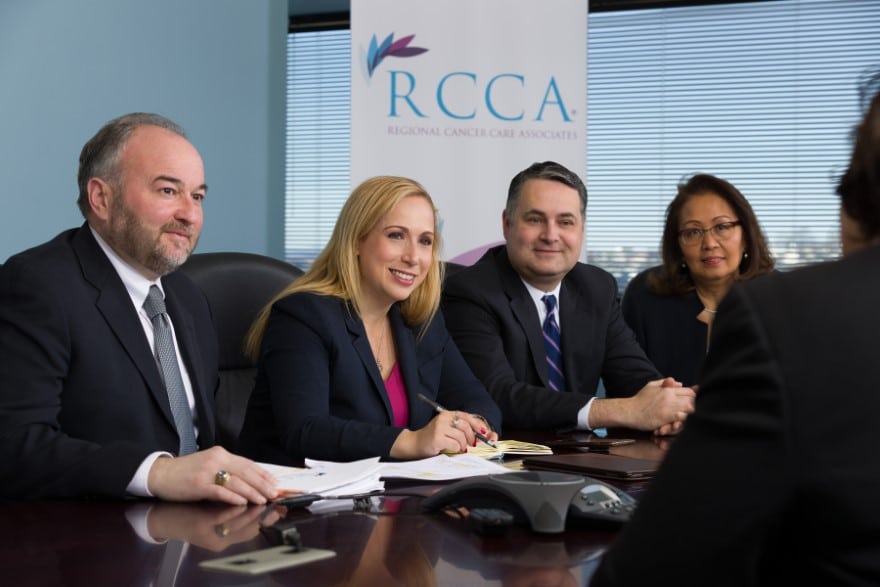 Aided by RCCA’s longtime outside counsel, James Rudy, and his team at Fox Rothschild LLP, Diamond helped the RCCA management team beat the deadline, completing possibly the most detail-intense project of her career at the time.

“When I got here, we were one company, but almost immediately each of the main segments of our business had to be moved into a new company,” she said. “That meant many moving parts had to go in the right direction, at the right time, and being part of a small management team, I had to get my hands dirty fast and wear a number of hats.”

New tax IDs and state registration had to be secured for the entities. Myriad contracts required revision or creation. Detailed attention had to be paid to applicable health care regulations, employment laws, intellectual property and data privacy matters across a variety of jurisdictions.

“We had phone calls every single morning for months to discuss the implementation of new workflows across billing, accounting, human resources, payer contracting, IT and legal, among other things,” says Diamond, who was responsible for monitoring the business lines’ completion of the transaction schedule throughout the process.

Shortly after the completion of RCCA’s restructuring, Diamond took the lead in implementing the acquisition of a group of Connecticut-based cancer specialists, giving RCCA its first presence in that state. This would be followed by her overseeing the addition of a new group of physicians in central New Jersey. Most recently, Diamond managed RCCA’s acquisition of its first free-standing, community-based radiation oncology center in New Jersey, along with the addition of an extensive team of physicians and staff who came from Princeton Radiation Oncology.

Today, RCCA provides a seamless and comprehensive system of cancer care to patients that addresses their needs across medical oncology, hematology, radiation oncology, molecular laboratory testing, oral oncolytics, infusion services, clinical research and advanced treatments including immunotherapy and targeted therapy. With dozens of community-based offices and professional contracts with key hospitals across the region, RCCA’s presence is expanding along the East Coast and Diamond anticipates the growth will continue. 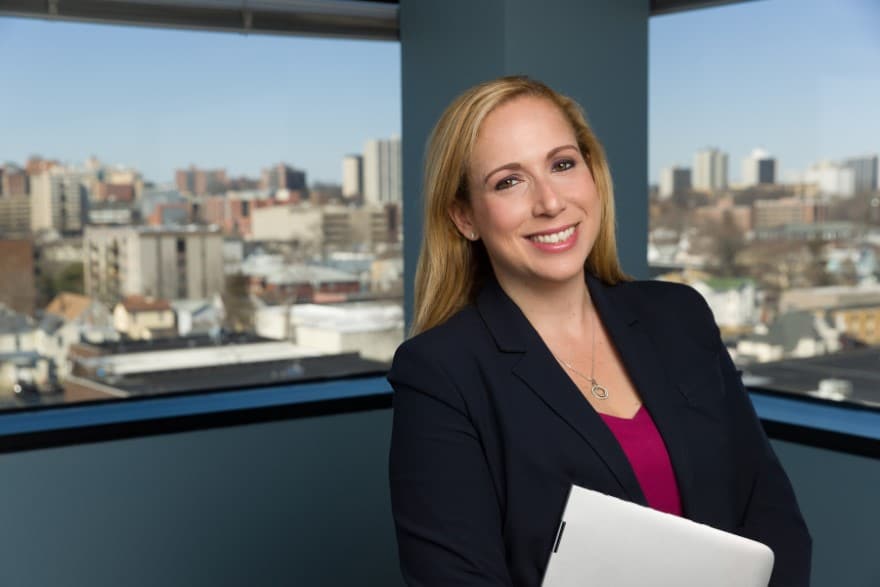 “I would like to think that we’ll keep expanding, even become the biggest independent oncology network in the country,” she says. “And while there will always be pros and cons about being in-house, my job is extremely meaningful—everything I work on ultimately allows our physicians to focus their efforts on providing the top level of care for our patients.”

Diamond adds that “RCCA is unique. Our group takes a personal, community-based approach to patient care in an industry that is becoming more consolidated and routinized. Further, our business model allows physicians, who have invested years of their lives in developing their practices, to remain owners and actively involved in the future of their operations with the management and guidance of a stellar management team.”

Family tradition and considerable experience have given Diamond a keen appreciation for what goes into developing and maintaining a successful oncology practice.

Her father is Dr. Richard M. Diamond, whom his daughter refers to as “probably the last solo practicing physician of his kind” and an oncologist stalwart in Cornwall, New York, whose patients travel from far away and include veterans and West Point personnel. Her brother, Elan Diamond, is chief of medical oncology at Holy Name Medical Center in Teaneck, New Jersey.

Naturally, Diamond picked up much of her oncology-related knowledge throughout her upbringing. She even spent summers as a young adult working in her father’s office to gain a better understanding of his practice. Of course, there are times today when her father and brother seek her “pro bono” advice on compliance matters and the like, but they’ll return the favor when she needs a doctor’s insight. 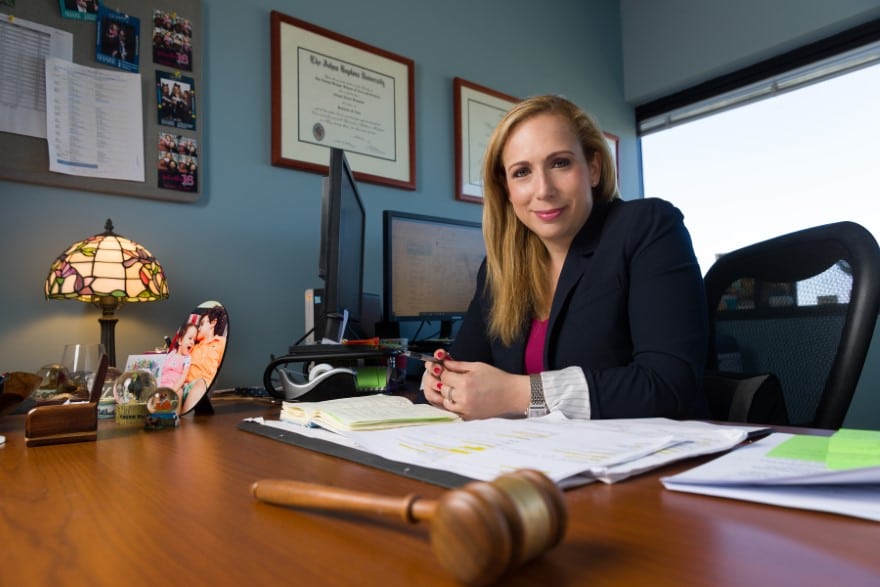 And while she’ll never fight cancer from the clinical side because, as she quips, she couldn’t tolerate organic chemistry at Hopkins, Diamond fights for important causes not just as RCCA’s general counsel but through her involvement in extracurricular activities.

The mother of two small children, she also serves on the executive committee and board of directors of SHARE, a national nonprofit that supports, educates and empowers women affected by breast, ovarian or metastatic breast cancer, and as a board member of Care Plus NJ, a New Jersey nonprofit that supports programs and services for individuals affected by mental illness, as well as education and outreach to decrease the stigma of the disease. Both causes entail helping under-served communities.

It seems ironic, Diamond says, how this one-time pre-med turned law student wound up applying her skills for a growing oncology and hematology network that now includes over 100 doctors, 1,000 employees and 30 locations. The word “fate” pops up in her recollection of the busy past few years.

“I’m grateful every day that this job found me,” she says. 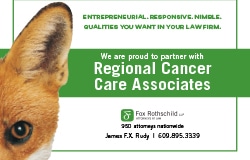 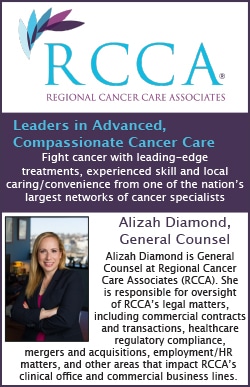 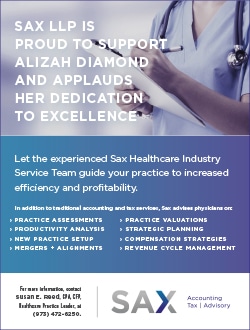