The story started out on a quiet southern afternoon, Antigone Davoulas says, when three women met up at a local Proposition 7 campaign event in Arkansas to collaborate over crawfish.

But they weren’t swapping recipes, the general counsel at Shake Collaboration remembers. They were talking about cannabis and hemp—even though it wasn’t “that” kind of gathering. 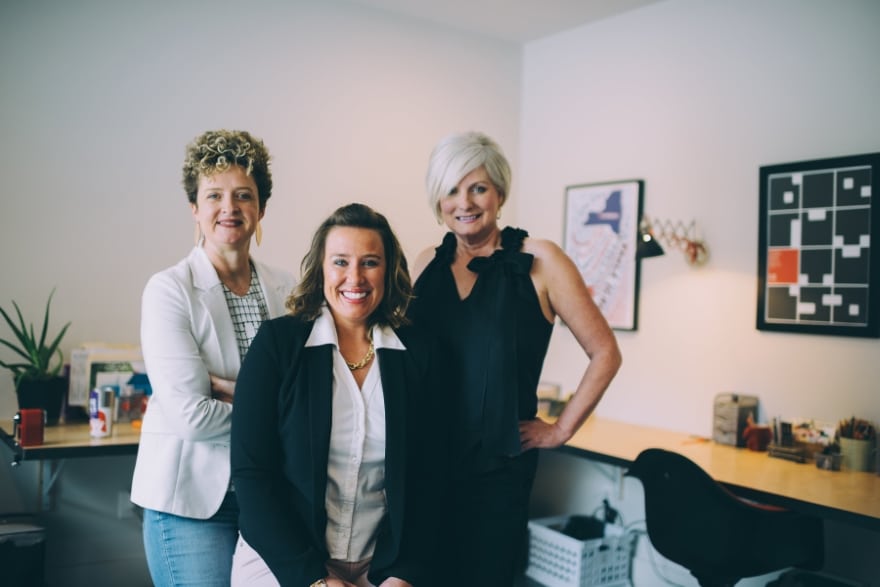 It was the start of a small, but motivated, group with a vision to elevate cannabis branding and hemp education to better shape the public’s perception of cannabis just prior to the successful passage of Arkansas’ medical program. This trio eventually became the founders of both Shake Collaboration LLC (a cannabis branding house) and later Shake Extractions LLC (an industrial hemp research and development consultancy) making them pioneers in the industry.

Empowered with a vision, the Shake team is establishing its first organic product line of full-spectrum hemp oil infused products, as well as promoting research trends in hydroponic agriculture and chemical-free extraction methods. The reward? Being given the first all-female industrial hemp processing and handling license in the state of Arkansas.

Most importantly, Davoulas says her team at Shake makes a point of collaborating and sharing resources and information with others—posting strong earnings along the way.

“The purpose of Shake Collaboration is to share our knowledge and develop thoughtful formulations that make life better,” Davoulas says. “We are sticking to the science of hemp and sustainability. We believe in the power of science and of the plant.”

The science of hemp

An interesting thing about hemp, which is the non-psychoactive strain of Cannabis sativa, is that it has long been an agricultural product and one of the first plants spun into usable fiber 10,000 years ago. Even George Washington grew it at Mt. Vernon.

Fast forward to the summer of 2019. On the hemp horizon is the launch of Shake’s first product line called “CBD & ME,” which includes infused organic balms and rollers made with what is known as the “authentic” strain of hemp. The tinctures for humans and animals are in the final phases of development. Taking shape alongside the product is an e-commerce platform, with the company currently testing sales on Amazon. 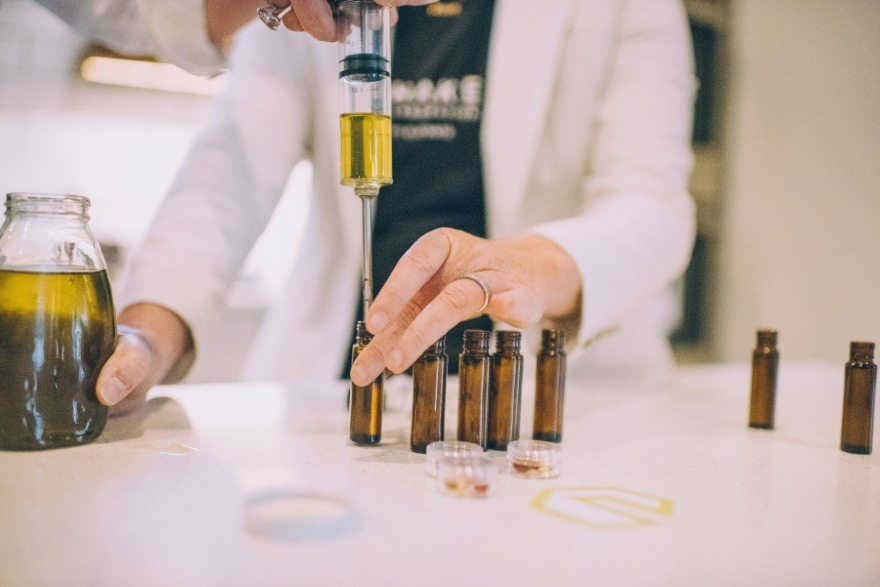 The backbone of these advancements for future product development comes from Shake’s investment in research. In the coming months, Shake will further develop the brand, Hydro Hemp, which, as Davoulas explains, involves growing hemp roots hydroponically, subjected only to clean water, without bugs and no need for pesticides. The female hemp plant’s roots, she says, has beneficial properties where new terpene profiles and cannabinoids are just waiting to be discovered.

Once harvested in this process, the clean roots are dried, turned into powder and combined with organic carrier oils to be transformed into skincare products. By focusing on the roots of the plant, Davoulas says, Shake is separating itself from the mainstream, due to the uniqueness and lack of current research in this area.

“One of the things we pride ourselves on is sticking to the science; we want to work with formulas that work for everybody,” Davoulas says.

The women of Washington County

It was that pivotal afternoon in Fayetteville that Davoulas says pushed her legal career in a new direction. A southerner, Davoulas had gone west after graduating from the University of Mississippi School of Law in 2010, and after further education and a few legal gigs in Hollywood, ultimately landed a career at Playboy Enterprises Inc. in Beverly Hills as manager of licensing and business affairs in 2014. When her fiancé was relocated in 2015, Davoulas decided to give Arkansas a shot, and that’s where she met Julie Brents, now “Operations Bud” and graphic designer, Brittany Phillips, now “Creative Bud” and started talking about cannabis. The trio says in the world of science the word “bud” has an upbeat connotation and they thought the term best described the new growth of their initiatives at the start of their venture.

Doing some legal work on the side for Walmart/Sam’s Club in 2016, as well as working as the director of business development for Counsel On Call, she and her new “buds” kept the conversation alive by talking about licensing and trademark issues, science and education, health benefits and how these ideas could come to fruition within the new industry.

“The story is really a celebration of women, and specifically women in hemp,” Davoulas says, noting that the all-female team includes outside counsel and strategic business partners from Texas to Colorado including local counsel, Christian Gunn for TM portfolio management. “If we don’t know how to do it all ourselves, we tap other experts. They just all happen to be women in our case.”

Shake it up baby

After getting her law degree at Ole Miss and moving west, Davoulas picked up an advanced master of laws degree in 2011 from Chapman University School of Law in Media and Entertainment Law with a focus on music and film. 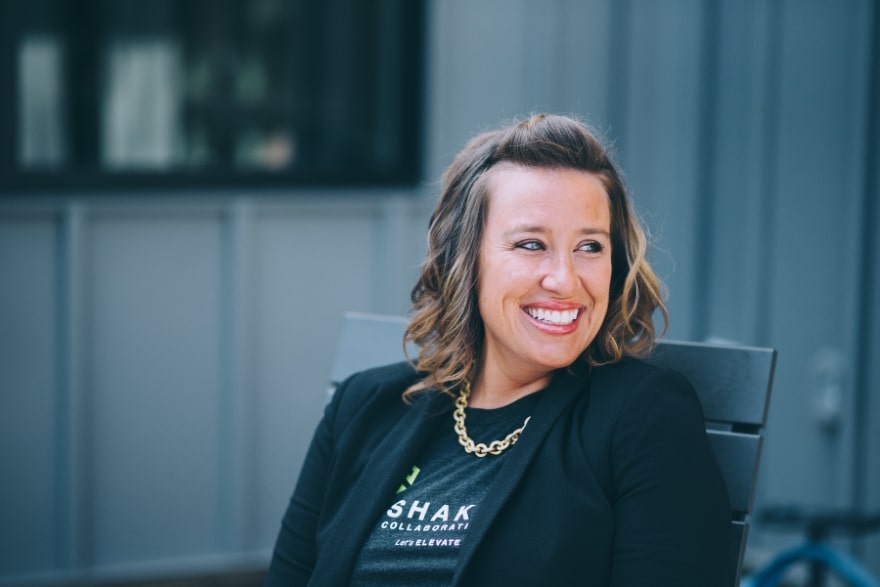 After graduating, she worked at Lionsgate in Santa Monica and as a legal blogger in the Bay Area at the same time. In 2011 Davoulas worked in copyright compliance at Brave New Films in Culver City, before landing her first position at Playboy in 2012 as executive assistant to the general counsel. Then came Arkansas.

But why the fascination with cannabis and hemp?

“One of the reasons that I chose this field was the implementation of the state’s new hemp pilot program, and I saw an opportunity in the marketplace,” Davoulas says, noting her prior experience at Playboy, from a regulatory, compliance and trademark standpoint had her well-suited for the task. “I wanted to see if I could apply what I learned on the West Coast in another area; with cannabis law being a state-by-state game, I was in the right place at the right time.”

Davoulas says it may seem like a lot of barriers in a highly regulated market but says it’s worth it when the group hears about how they are making a difference in other people’s lives.

“It keeps us going,” Davoulas says. “Shake is here as an authentic resource, helping people every day, from farmer to patient.” 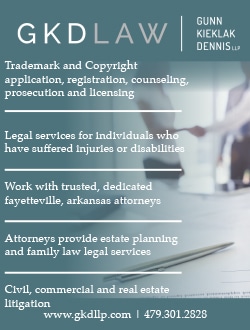