From the courtroom to the boardroom, Arthur Gonzales says law is about consensus building

Every attorney has important learning moments early on that will shape the direction of his senior career. For Arthur Gonzales, that “moment” was a five year-long clerkship in the Ohio Third District Court of Appeals where he worked on cases as diverse as complex business litigation, drug trafficking and homicides with death penalty sentencing.

“I saw things a 30 year veteran attorney wouldn’t see because you’re literally getting into 17 counties’ worth of appeals,” he says. 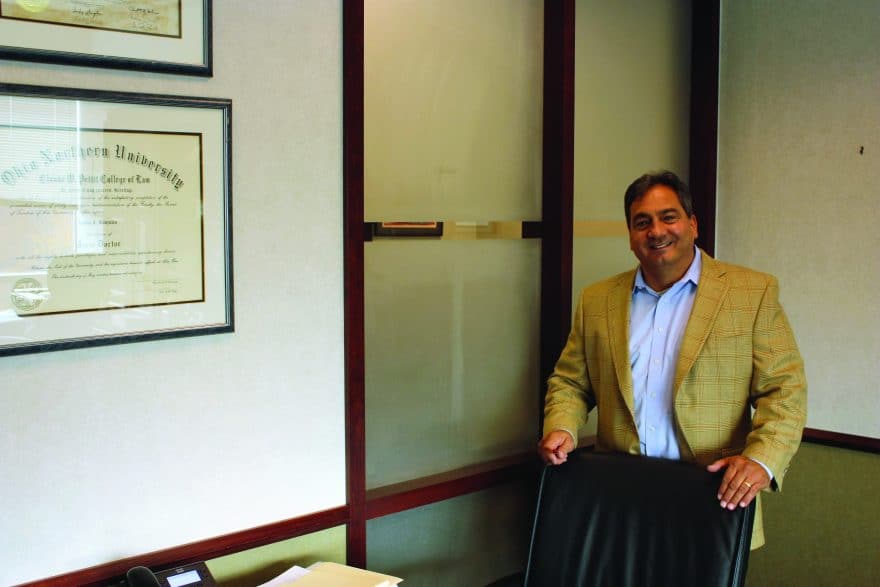 Beyond the depth and breadth of experience he gained, he says the five years he spent working for Judge Thomas F. Bryant sharpened his writing and communication skills, preparing him for his current position as general counsel at National Interstate, a property and casualty insurance company serving all 50 states.

When he was a judicial clerk, Gonzales says one of the most challenging and exciting tasks he did was help Judge Thomas Bryant draft judicial opinions. The Court of Appeals has a panel of 3 judges, and at least two must agree for a majority judgment and opinion. One judge is assigned to write the majority opinion justifying and defending that position, based on legal briefs, all evidence and any oral arguments given by attorneys.

Though judges may be in overall agreement, they don’t always agree on every detail of a case. As a result, the judge who writes the majority opinion must craft a document that accurately represents the views of his peers. If the opinion doesn’t do this, judges may alter their opinions or just write a dissent.

“You’re trying to be fair and build a team-like consensus atmosphere,” Gonzales says.

In one example, Judge Bryant filled in for an Ohio Supreme Court Justice on a complex business litigation case that also involved an international treaty. Bryant and his two clerks were tasked with writing the majority opinion for the case. Because the Supreme Court has seven justices instead of three, and because the case was so complex, Gonzales says the opinion was dozens of pages long and required days of research.

The case was important for Gonzales because it showed him just how difficult it can be to build consensus on complex issues. Though four justices were in agreement during preliminary discussions, after Bryant and his team presented their opinion, more discussion followed, causing several justices to change their mind and put Judge Bryant into a dissenting opinion.

From courtroom to corporate

Twenty years later, Gonzales no longer works in the court, but has instead built a career as in-house counsel that has led him to become general counsel at Ohio-based National Interstate.

He says the experience he gained at the court helps him defend National Interstate and in some cases prevent the company from entering litigation at all.

But more importantly, his time writing and communicating with judges taught him volumes about team work. He says meeting with business executives during a meeting is not so different from drafting an opinion paper—in both, consensus building is vital.

“Sometimes a business plan jumps from step one to step three,” he says.

Gonzales’ job is to explain the importance of step two—without shooting down the project.

Gonzales’ job is to explain the importance of step two—without shooting down the project.

“Sometimes we say we’ll get you to the same goal, but we’ll take a different approach in doing so,” he says.

Gonzales says it’s important to first hear out business people on the important parts their strategy, just as he used to hear out other judges and their clerks. These active listening skills put business partners at ease and help National Interstate see its legal department as a resource instead of an obstacle.

Another takeaway from his time at the court is the benefit of mentorship. Gonzales says the effort Judge Bryant went through to help him made a lasting impression. As a result, Gonzales tries to extend the same kind of help to the corporate attorneys on his team.

He does this by encouraging his team to work face-to-face whenever possible and to use email only as a “last resort.”

“Get out of your chair!” he tells his attorneys. “Do your research and find out what the issue is.” This is easier to accomplish face to face rather than with the “quick hits and answers” offered by email, he says.

Within the team, Gonzales seats his three attorneys next to one another so they can speak face to face when they have questions or concerns. This doesn’t just make communication easier; it encourages the younger lawyers to learn from one another.

Just as he learned from the other law clerks under Judge Bryant, Gonzales encourages his attorneys to cross-train in each other’s dedicated areas. Each attorney in the team handles certain dedicated areas, but Gonzales says he will hold weekly meetings where he often asks attorneys to swap projects so they can broaden their knowledge.

More importantly, he says, it helps young attorneys learn to adapt and will give them more opportunities later in their career—the same benefit he received from his clerkship.

“You can see their enthusiasm to address legal issues they haven’t previously seen,” he says.  “It’s a wonderful thing.”