Making an impact in-house at the large tax-preparation company

Growing up as the daughter of an attorney, Anna Mechling has had an interest in law for as long as she can remember. An experienced litigator, Mechling’s father imparted two pieces of advice that have long stuck with her.

“He said law school teaches you a new way of thinking and he also always told me that you don’t have to be nasty to be a lawyer,” says Mechling, corporate counsel at tax preparation company Liberty Tax Service. 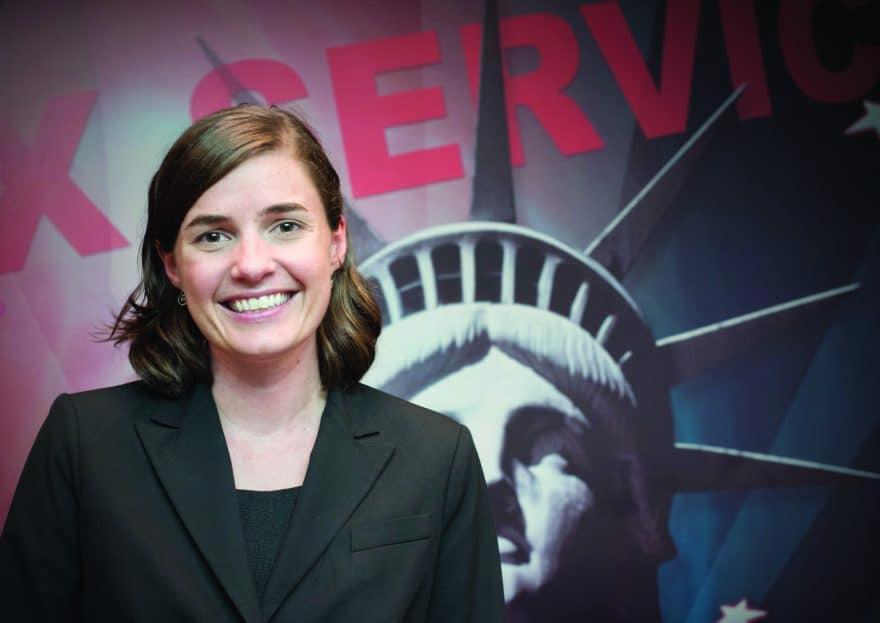 After graduating from University of Richmond School of Law in 2009, Mechling spent two years clerking for judges in the Chesapeake Circuit Court, gaining firsthand experience with the ins and outs of the court system that still serve her to this day.

“I was able to learn the steps and see how judges think — their process. It helped me get actual knowledge of the court process and is very useful today in many respects, and especially with litigation matters,” she says.

Mechling briefly pursued a career in family law at a Virginia Beach law firm, becoming a qualified guardian ad litem before ultimately becoming frustrated with the specialty altogether. “It felt like all I was doing was assisting to tear things apart rather than creating something I could take pride in,” she says. “In most situations, the case itself was costing the litigants more than what they were going to gain, which just seemed a bit crazy.”

Seeking a change of pace, Mechling began to consider an in-house, corporate position after meeting Vanessa Mercurio Szajnoga, a family friend and Liberty Tax’s current general counsel. “I liked the way she thought and talked about the business as an attorney, and she has been very encouraging and inspiring to me,” says Mechling.

Today Mechling works as part of a six-attorney team at Liberty Tax, where she relishes the excitement and variety of legal work. “No day is the same,” she says. “I love the variety of issues that I have the opportunity to be involved in. It’s all about continuous learning and we have an open-door policy here, so I can have three or four people stopping in every hour needing my legal guidance.”

The tax preparation calendar is divided into three seasons, each with its own set of challenges. In the pretax season, she is busy facilitating the legal agreements and contracts involved in helping the business get franchises set up and running.

Come tax season, Mechling helps the business respond to any legal issues a franchise or company store might have and in the post-tax season she deals with state and federal regulatory compliance issues and required legal filings.

The role gives Mechling the opportunity to continually use creative thinking to strengthen the company both from a legal and business perspective. As the nation’s third-largest tax preparation service, Liberty Tax has steadily grown its presence in the market thanks to a franchise model that presents its own unique set of legal challenges.

“The franchise piece is fascinating and getting the contracts and required filings ready is something I enjoy,” she explains. “Here we are helping people set up their own business and providing them with the tools to be successful.”

In the three years Mechling has spent at Liberty Tax, her role has grown to include ever-larger responsibilities. While she started out primarily preparing disclosure documents and working on franchise and trademark law, she has increasingly been called to handle the company’s litigation related work.

“I just returned from maternity leave in December and stepped into the litigation role,” she says. “I have done some litigation in the past, so that experience has been valuable in helping me understand where the weak points can be when preparing for, or going through litigation. This new role has also helped me develop skills to issue spot potential problems early on and try to address them up front, prior to ending up in litigation.”

As she settles into her role at Liberty Tax, the company has become increasingly focused on strengthening the business and Liberty Tax’s franchisee base. “The company has created an Executive Task Force to examine potential compliance issues and take aggressive action to ensure all franchisees meet Liberty’s high standards,” she says. “Liberty’s commitment to excellence is encouraging and exciting for the future. It’s refreshing to see a company take compliance matters so seriously.”

Mechling is particularly proud of her recent work helping to develop the legal documents for Liberty Tax’s new brand, SiempreTax+, which focuses on serving Spanish speaking customers and the Hispanic community. “I worked on the legal requirements of the underlying agreements,” she says. “It is now in its third year and is continuing to grow. What I like about this job is that I feel like I am building something up rather than tearing it down like when I was in family law.”

Mechling is satisfied in helping Liberty Tax to grow and succeed through her role in the legal department and focusing on motherhood. “Right now being a mom and having a full-time job is plenty,” she notes. “I feel lucky to be a part of a company that provides work-life balance and values its employees and franchisees.”

As she continues to grow as a legal professional, corporate counsel Anna Mechling will continue to work to meet the legal needs of Liberty Tax, one of the country’s largest tax-preparation service companies.