Traditionally, companies provided their employees with defined-benefit pension plans that, if the employee served for a predetermined number of years, would pay the individual some set amount of money for the rest of his or her life.

Few companies now provide pensions, and the individual savings through 401k plans that replaced them often aren’t enough to pay for basic life and health necessities as well as things like travel and hobbies. Many 401k holders are outliving their savings. 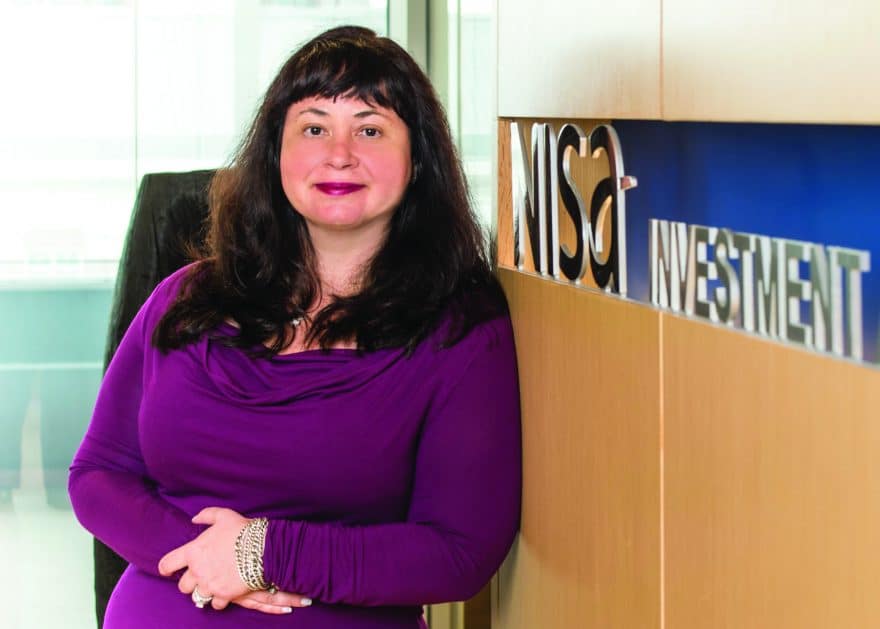 NISA Investment Advisors LLC is thinking hard about how to prevent this from happening.

NISA’s tendency to serve the greater good, while also meeting its clear business prerogative, is what drew Bella Sanevich in to NISA, where she started as an attorney in 2003.

“We’re working hard to develop ways for individuals to replicate the best of defined benefit and defined contribution plans so their 401k assets can potentially last for a lifetime in retirement,” says Sanevich, now NISA’s general counsel.

At the same time, “Clearly we’re a business,” she says. “We want to make money, but we believe this is the right thing to do. To me, trying to do well and good is very rewarding.”

Sanevich has always been pulled between a need to make a living and a desire to help others, both of which were ingrained by her experiences emigrating to the U.S. from the former USSR when she was nine. Her role at NISA satisfies those often opposing poles.

Years ago, when Sanevich graduated New York University with a finance degree and wasn’t a lawyer yet, she wasn’t as excited as she felt she should be by a “fantastic opportunity” to work with a large investment bank. Law school seemed like a good alternative.

“It was less common to take a few years off, and also I’m an immigrant so there was a lot of baggage with waiting a year or two,” she says. “My mentality and my parents’ mentality at the time did not suit that, so I couldn’t just say, ‘Oh, I’m going to go find myself, think about this or travel.’ That was not an option mentally or financially, so law school seemed like the right thing to do.”

After law school, she spent several years working in large New York law firms and developed a niche in financial services. When her husband accepted a teaching position at a law school in St. Louis, Missouri, she telecommuted from St. Louis to a law firm in New York for three years.

Though that was rewarding, it got to be too much, and “by serendipity” a headhunter contacted Sanevich just as she was thinking about switching to a job in St. Louis, going to back to school or pursuing something in the human rights field.

“Artists say when things happen unintentionally they’re happy accidents,” Sanevich says. “It’s certainly a very fortuitous and serendipitous coming together, and I say that we moved to St. Louis because of my husband’s teaching career, but we stay in St. Louis because of NISA.”

Sanevich had never heard of NISA when she was contacted by the headhunter because it is an institutional asset manager and until then she had worked primarily with private investments and mutual funds.

“I got a really strong sense of not just making a profit, but actually doing right by our clients and not cutting corners, not skirting rules,” she says.

From the beginning the culture set forth by NISA’s executives was to be honest and straightforward and to do the right thing for its clients. Sanevich took comfort in that and in being in a place where she didn’t feel pressured to shave facts or slough things off.

“I guess in hindsight that was a good call,” she says.

As one of the senior people, Sanevich reflects often on how to maintain the small-shop culture that existed when she started. She says NISA’s employees are some of the smartest people she’s met. They all think deeply about the right way to operate and how to maintain that mentality as the company grows.

“For me personally, I do get utility out of knowing that if we can make this work, it will actually help people,” she says. “To me, just because of the way I’m wired, that’s rewarding.”