After almost 18 years with Keller Foundations LLC, David Peitsch is still one of the new people.

Keller Foundations LLC is the North American division of global ground engineering and foundation services company Keller Group PLC. In the 18 years since Peitsch, chief legal officer and ethics & compliance officer, has been with the company, it’s grown from $100 million in annual revenue to $1.5 billion annually, and many of its staff have stuck with the company through this extreme growth.

“It’s a company filled with employees who have 20 to 30 years of experience and everybody stays around quite a while,” Peitsch says. 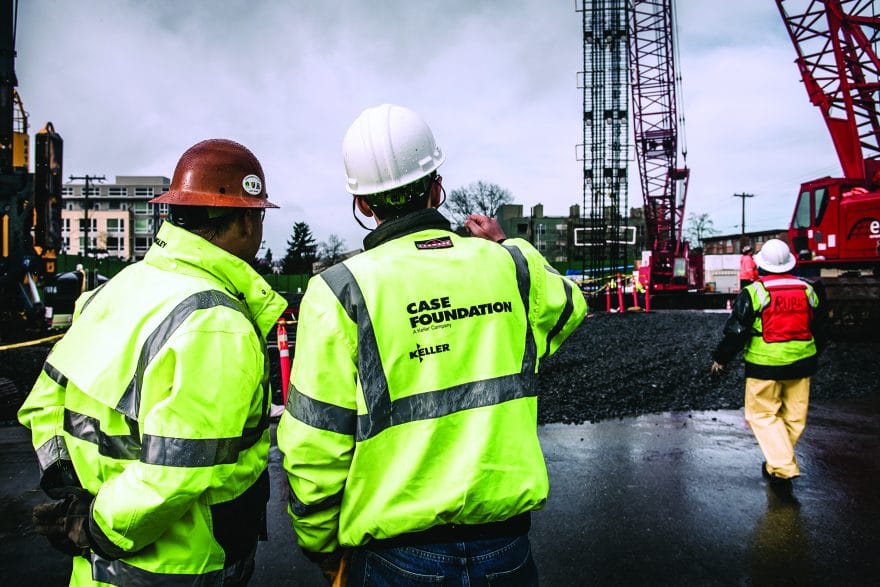 Peitsch says Keller Foundations is made up of driven, intelligent people who know they are part of something larger than themselves. Egos are checked at the door.

“It’s [focus is] construction still, and fortunately we’ve had good people who have risen through the ranks, and they’ve been quality people,” Peitsch says. “We’ve never had to hire too much outside of Keller, so that we could maintain that culture and maintain that humility. One doesn’t need to pretend to be bold if they have those years and the gravitas behind them.”

That humility is remarkable given Keller’s impressive growth, about half of which has been through acquisitions.

“I am specifically proud of the fact that in the acquiring of other companies over the past 17 years, we submitted 19 letters of intent and closed on 18 of them,” Peitsch says. “That is a very good record. We basically became the buyer of choice due to our reputation.”

The companies it’s acquired appreciate that Keller closes its deals and provides its new employees with a great place to work.

“We treat people well, and most employees prefer us over the sellers just because it’s a great, stable place, and there’s much more opportunity at a larger firm, like we are now,” Peitsch says.

That stability allowed Keller to purchase Florida-based HJ Foundations just before the recession. Keller kept the company going without mass layoffs and as the economy rebounded, HJ Foundations became one of Keller’s most successful acquisitions.

Acquisitions like these keep the legal team’s five lawyers busy, and Peitsch says they really have enough work to keep 20 lawyers busy. Still the acquisitions are part of the reason Peitsch likes his in-house role.

In addition to acquisitions, Peitsch says his legal team ensures Keller Foundation gets paid what it’s owed. In an industry where developers routinely run out of funds, projects stall and clients change their minds, this is vital, he says.

In 2007, Keller did the ground and foundational work for the Chicago Spire, which was to be the tallest building in the world. The project came to a halt when the developer ran out of money. Still, it owed Keller an eight-figure amount for the work the company had done. Keller and his legal team used Illinois’ lien rights laws to collect the full amount the company was owed.

The legal team also adds value by handling most insurance issues without needing Keller’s insurance provider to pay out. In fact, the company’s insurer has not had to pay a claim the past four years. Peitsch says that’s due to the legal team’s proactive approach to handling claims.

If Keller begins work on a project that’s similar to a past project that resulted in a claim, the legal team makes sure everyone knows that type of project has been historically risky so that they can work to minimize risk. This is especially important for such a large company whose projects are spread throughout the country.

“Construction has physical risks and we attempt to stay ahead of issues and give our field personnel the best information concerning safety risks and how to avoid them,” Peitsch says.

An ethics and compliance compass

Peitsch’s work is not always limited to the U.S. He worked with Keller’s UK-based parent company Keller Group PLC to develop global ethics and compliance standards.

“One philosophy we have here is we shouldn’t focus on complying for the sake of compliance or try to work our way around the law,” he says. “We need to actually, genuinely believe that the laws have the best intent.”

In his eyes, it’s better to comply because it’s the right thing to do than view compliance as jumping through hoops. The legal team is progressive here too, and it drafts company policies so that if only a few states enact a regulation, Keller generally complies with that rule in all of its jurisdictions, not just states that require it.

As Keller continues to grow, Peitsch knows he will have to delegate more of his tasks, but he says compliance will likely be something he keeps close to the vest.

“Ethics and compliance is probably the last area that I’d shed as my primary responsibility,” he says. “There’s a certain compass that the company needs and that needs to have a leader. Compliance still needs to be driven from a high level because I think we need to keep reminding people of and enforcing our ethics.”