Through years abroad, a global view

To say that Hoyt Webb has international experience would be something of an understatement.

His role as vice president and general counsel for Legrand North America, a global provider of products and systems for electrical installations and information networks, requires a good deal of travel, including to the parent company, Legrand S.A., in Limoges, France. It also presents the opportunity to speak French.

However, unlike many executives who adapt their lives to their jobs, Webb has always sought to be part of other cultures. The rest of his life, the work and study, have fallen into place around this desire. 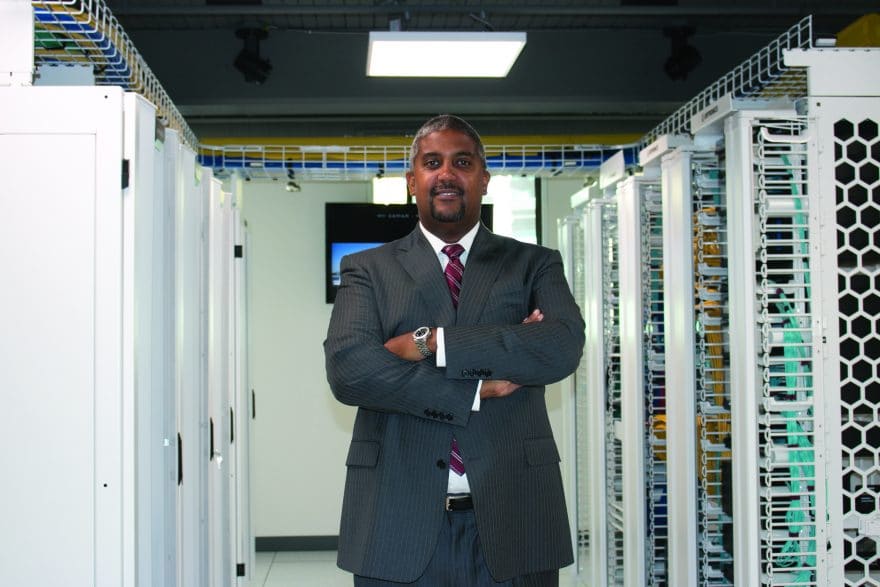 Before graduating high school, Webb had already spent an academic year in France living with a foreign family and attending French high school. It was his mother’s idea for him to spend the year abroad, and Webb remembers the experience as a rewarding struggle.

“You’re figuring out a new system, you’re making new friends, eating new food and [you think] ‘I can do this,” says Webb. “It really does give a lot of personal confidence as well as an expanding understanding of different perspectives.”

Webb would continue to travel the world, spending a year in Japan before attending law school, and then returning to France as an intern with the French Securities and Exchange Commission after he had graduated with a joint degree in law and global business from Columbia Law School and Columbia Business School in 1993. A few years into being a securities lawyer with a Wall St. firm, he once again went abroad to serve in South Africa as Clerk to Justice Arthur Chaskalson, whom President Mandela had appointed as president of the nation’s country’s newly created Constitutional Court.

While after that experience Web returned to being a securities lawyer, he was always on the lookout for opportunities to leverage his cultural and professional experience “to really identify with my clients and their objectives,” he says.

This combination of cross-cultural interests and business and legal skills continued to be a driver for Webb, and served him well during his next career—at IBM.

For over seven years, “IBM afforded me an unprecedented ability to engage on a larger scale, and offered the tools and training to lead and manage,” says Webb. “I was able to work in leadership capacities on some very complex local and international transactions, including the sale of IBM’s PC division and foreign acquisitions.”

Back in 2008, when Legrand approached Webb about the position of vice president and general counsel, he was “ready to apply his talents at a higher level at a growing global company,” he says. The chance to speak French was a welcomed plus.

Legrand North America is a subsidiary of the French industrial group, Legrand, S.A. The company is a leader in electrical and digital systems and networking infrastructure that help residential and commercial customers utilize power, light and data.

These products include energy saving dimmers and lighting controls “all the way up to whole home automation with digital lighting management,” says Webb. Other products include shade controllers, conference table power and A/V outlets, and intelligent PDUs. In addition to A/V cabinets, data cabinets and connectors, Legrand also provides design and engineering services for data centers.

“We are there for the commercial contractor, as well as the individual home owner, as along with their interior designer, builder or remodeler, and… our customers include builders that build communities and neighborhoods,” says Webb.

Legrand has only expanded since it was founded in 1966. In fact, from December 2015 to August 2016, Legrand North America has acquired five companies. This kind of growth creates complexity.

In fact, when Webb first joined Legrand, his priority was consolidating the use of law firms.

“I determined that [the company] had on the order of some 50 different law firm relationships that they were using for different matters,” he says. “The seven companies that comprised Legrand North America when I arrived were using different outside counsel for environmental issues, human resources, mergers and acquisitions and intellectual property disputes. What led to even more confusion was spending wasn’t centrally managed.

Through internal client surveys and interviews and the systematic value engineering of law firm relationships, Webb began a multi-year process to understand, control and reduce legal expenses. He ultimately pared the list from 50 firms to roughly six that had proved the most reliable and easiest to work with, saving money while also offering much needed insight into legal expenditures within the company.

“We can now see much more clearly where the spend is going, where the issues are arriving and how we can work collaboratively to develop processes that help predict and, to the best extent possible, manage these risks,” says Webb.

From 2009 to 2013, legal spending decreased by roughly 53 percent, or 21 percent if litigation and merger and acquisition costs are excluded. Annual savings for 2012 and 2013 were approximately 28 percent and 25 percent less over the year before, respectively.

From 2009 to 2013, legal spending decreased by roughly 53 percent, or 21 percent if litigation and merger and acquisition costs are excluded. Annual savings for 2012 and 2013 were approximately 28 percent and 25 percent less over the year before, respectively.

Though recent growth through acquisitions makes it challenging to keep up this trend, Webb’s model, including discounted, fixed- and alternative-fee arrangements, continues to be less costly and simpler than the old system. In recent years, Webb also helped Legrand cut its average cost of litigation costs in half.

Changes leading up to this effect were based on Webb’s belief that if a litigation firm has already represented the company on similar matters in the past, “[their] costs for these [new] cases shouldn’t be the same as when they were first introduced to the company.” In fact, they should be less, he says.

To ensure the company gets the best deal, from time to time Webb puts complex or larger legal project work, including litigation, up for bid, though Legrand’s preferred law firms always have first opportunity.

Through the law, imagination

Webb says it’s this type of problem solving that drew him to practicing law.

“I’d always liked complex puzzles and solving really complex issues,” he says. As a young man he was inspired by the characters of spy novels, war biographies and even some comic book heroes for their strategic thinking abilities.

“It was really the character’s ability to understand larger-picture strategic and tactical opportunities and realities around them and exploiting that understanding to achieve a desired outcome,” says Webb. “And I think that relates to law reasonably well, [because] understanding how the legal system operates allows me to facilitate positive outcomes for clients.”

Through Legrand’s North America division, Webb is solving problems on a very large scale, many of them international in origin. With sister companies in China and Canada—and Central America recently joined to Legrand North America—Webb is able to effectively communicate, even when we does not speak the language, because he understands that the “client cultural context differs with each location,” he says.

“Being able to interact with these different cultures and understand how to collaborate with clients to address their needs is something that my education and experience have allowed me to do pretty effectively,” says Webb. “I look forward to working equally well with the Central American teams tambien.”