Established in 1902, St. Luke’s Health System is Idaho’s largest healthcare provider, and Christy Neuhoff has been leading the legal charge there for the last 15 years.

Lately, as its senior vice president and chief legal officer, she’s helping the not-for-profit develop a health plan to be available in January 2023, though patients can start enrolling as early as October 15, 2022. To enroll, individuals will go through Idaho’s health insurance exchange, Your Health Idaho, which recently approved St. Luke’s products.

The new plan, designed to be affordable, will be offered to patients in 20 counties in southwest and south-central Idaho. Certain options will include $0 primary in-network care, as well as $0 in-network physician services for preventive care and maternity care. Most preventive and generic prescription drugs will cost a whopping $0.

“St. Luke’s mission has always been to improve the health of people in the communities it serves,” Neuhoff says. “This new option will remove friction points, such as tensions between providers and the health plan, resulting in a better experience for all involved alongside lower costs and premiums for members.”

According to her, the new plan removes impediments, including requirements that patients and their providers must obtain prior authorization from the plan for certain services—a pain for both parties. This is allowed as long as the referring provider, like a primary care physician, and the provider performing the care, such as a neuro-specialist, are members of St. Luke’s Health Partners Network.

“Innovation requires hard work and commitment, and this plan is a great stride forward in enhancing access to health care and improving customer experience,” Neuhoff says.

A healthy dose of legal

As excited as Neuhoff is about St. Luke’s Health Plan, she and her team must ensure that the organization sets up the plan in a risk-intelligent way. So, her legal, compliance and internal audit teams are collaborating.

The internal audit team is working with health plan leadership to engage in risk-mapping, which allows for foresight and preparation for potential and significant risks—like ensuring an effective reinsurance strategy is implemented. The compliance teams are focused on following all state and federal regulations, ranging from the federal No Surprises Act to the Health Insurance Portability and Accountability Act Privacy Rule regarding the dissemination and use of patient data.

“Of course, compliance is a major component of not just this new plan but anything we do at St. Luke’s,” she says. 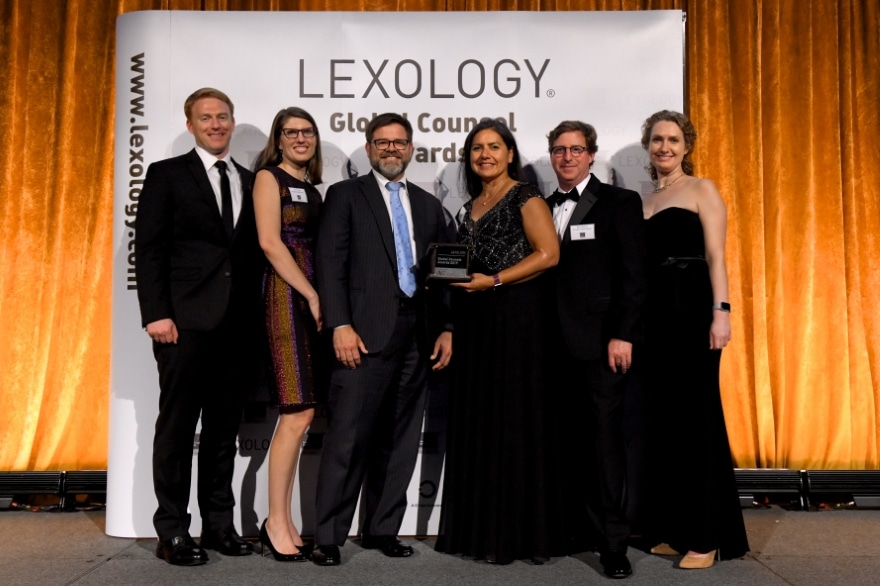 Despite that, in 2008, when she joined, the legal team was just her and one other attorney, who was half-time counsel and half-time compliance officer.

“We needed someone dedicated to compliance, so I recruited and hired a chief compliance officer in 2010,” she says. “Since then, he has developed a top-notch compliance team that really works with the business side of St. Lukes to achieve the best results.”

She’s also expanded the legal team from two employees to 20. Now there are 13 attorneys across five practice groups, as well as four paralegals and a contracts manager. Wanting a clear structure and line of accountability, she made sure that each of the five different practice groups was headed by a deputy and was mission oriented. For example, the Patient Relations group covers legal questions related to patient care, informed consent and other patient-centered issues.

“I have also enjoyed supporting the growth of St. Luke’s over the past decade and half. When I started, we had four hospitals, 20 clinics and approximately 6500 employees—and now we have eight hospitals, hundreds of clinics and nearly 17,000 employees,” Neuhoff says. “The development of St. Luke’s health plan is another example of our intentional development and growth.”

Neuhoff says she loves supporting communities in Idaho. She didn’t start her career in healthcare, however.

In fact, after graduating with her juris doctorate from the University of California Berkeley in 1997, she spent a year as a law clerk to the Honorable Judith N. Keep of the United States District Court for the Southern District of California. In 1998, she began her three-year tenure as an attorney at the law firm of Morrison & Foerster—before moving to Florida when her husband accepted a position as a professor at the University of Florida. She ended up finding her niche in the sunshine state at Shands HealthCare—now UF Health—where she was senior associate general counsel from 2002 to 2008.

“I was interested in eventually becoming a general counsel but wasn’t really looking for a new role—then I learned of a posting for a GC role in Boise, Idaho,” she recalls. “My husband and I always wanted to live in this part of the country, so I did a video interview with the recruiter—back before they were so common.”

The interview went well, so she flew out and met the team—and fell in love.

“Everyone there was committed to improving health—and they were so welcoming and genuinely proud of where they worked,” Neuhoff says. “Now, I’m proud to be a part of that team and helping St. Luke’s continue carrying out its mission to improve health by making healthcare affordable and accessible.” 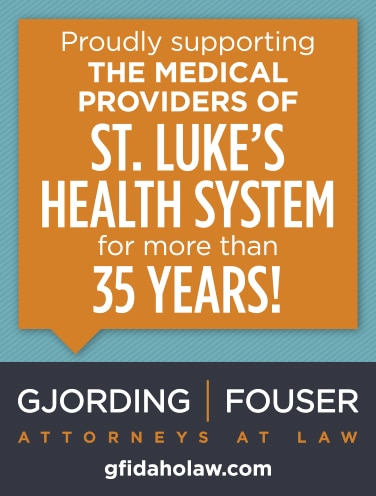 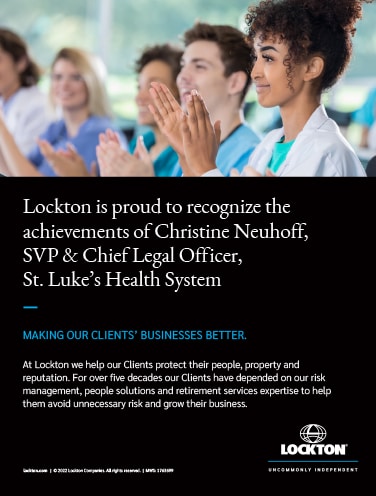