It’s a program that had long made first-time homeownership a possibility for K-12 public school teachers of modest means, but education is not solely dependent upon teachers.

Thus, reasoned the California Housing Finance Agency in 2017, other people also indispensable to public education should be recognized in the name of the program. 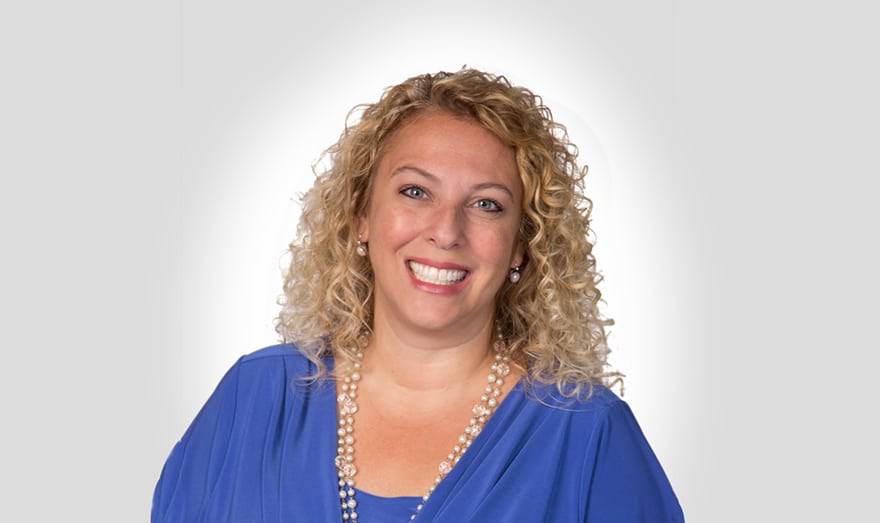 Hence the Extra Credit Teacher Program’s rebranding to School Teacher and Employee Assistance Program, which for the past couple of years has helped administrators, secretaries, counselors, support staff, cafeteria workers, custodians and others overcome what are often the two biggest obstacles to buying a home in the community where their services are so relied upon.

“The down payment and closing costs,” explains CalHFA General Counsel Claire Tauriainen, whose responsibilities include ensuring the legality and viability of loan products that provide a way around those obstacles. “Even if you have a good credit history, you may have trouble coming up with enough cash to cover those costs. But once you buy that first home, you’ve got equity. Opening that first door is where we come in.”

A member of the CalHFA legal team for a dozen years, Tauriainen was promoted to general counsel in the summer of 2018 by then-Gov. Jerry Brown.

Now in charge of a team of five lawyers and six support staff, she’s helped open that proverbial and literal door to tens of thousands of Californians over the years. Tauriainen relishes her role finding and implementing creative options for first-time buyers as well as other means for renters and developers of affordable multi-family housing.

And creativity is a must, Tauriainen adds, the Golden State being a pricy place to put down roots. The middle-class domicile that CalHFA customers seek is often priced well north of $300,000. Do the math—as educational folks are so adept—and that likely means a 3.5 percent down payment in the $12,000 range and several thousand more in closing costs. 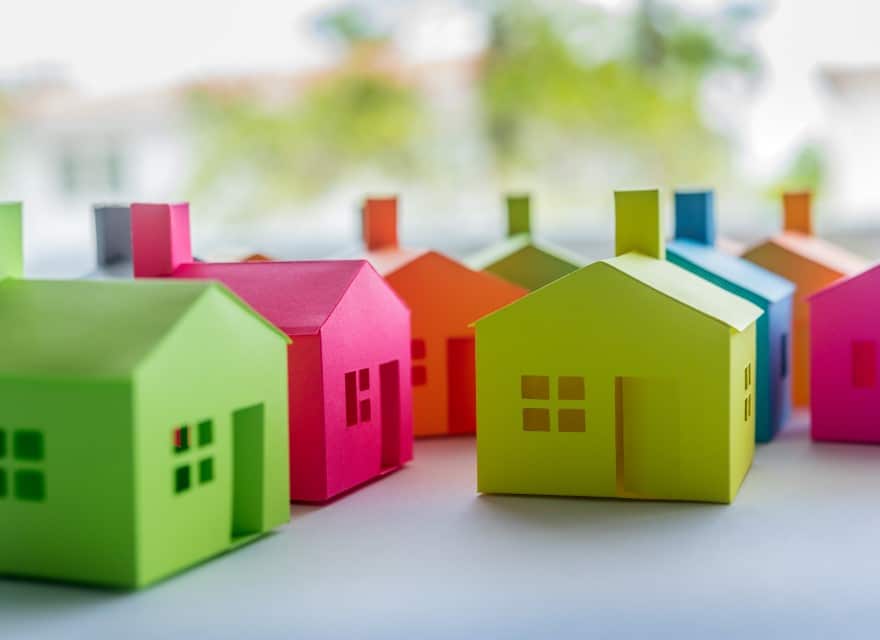 Any loan assistance toward that down payment with a flexible payback is likely to be welcomed, especially when the school employee may be juggling college debt obligations while trying to start or sustain a professional life in a most worthy endeavor.

With Tauriainen and her team overseeing compliance with state and federal law, CalHFA can render such assistance without tax dollars, its mission sustained through tax-exempt bonds whose revenues are generated by mortgage loans. Efforts also are made to fully inform the applicant of what’s at stake, with homeownership counseling the rule before a loan will be considered. There’s also a debt-to-income ratio, with flexibility afforded for location—another must since what’s considered affordable in Los Angeles County and the Bay Area would be considered affluent most anywhere else.

“My team and I assist in the development of loan product offerings that both comply with the law and add value to the families that use them,” Tauriainen tells Vanguard from her office in Sacramento. “We don’t just decide whether the loan products are legal. We also look at whether they’ll prove useful.”

For example, there’s the so-called silent second that spares a first-time buyer payments that are deferred until the home is paid in full, refinanced or sold. That’s why it’s called silent, Tauriainen says.

“It just sits there while supporting self-sustaining, long-term ownership,” she explains. “Our whole goal is helping families afford their monthly payments, not to get bogged down by them.”

CalHFA also hasn’t gotten bogged down by defaults, Tauriainen goes on to say, adding that fiscal year 2018-19 set a record with over 12,000 loans approved across all of California’s 58 counties.

And while CalHFA may be best known for assisting first-time buyers, the agency’s mission doesn’t stop there. It also aids those whose homes have been damaged or destroyed by such natural disasters as the wildfires, mudslides and floods that seemingly have become regular events.

“Earthquakes, too, are always in the forecast,” Tauriainen says with a touch of grim humor. 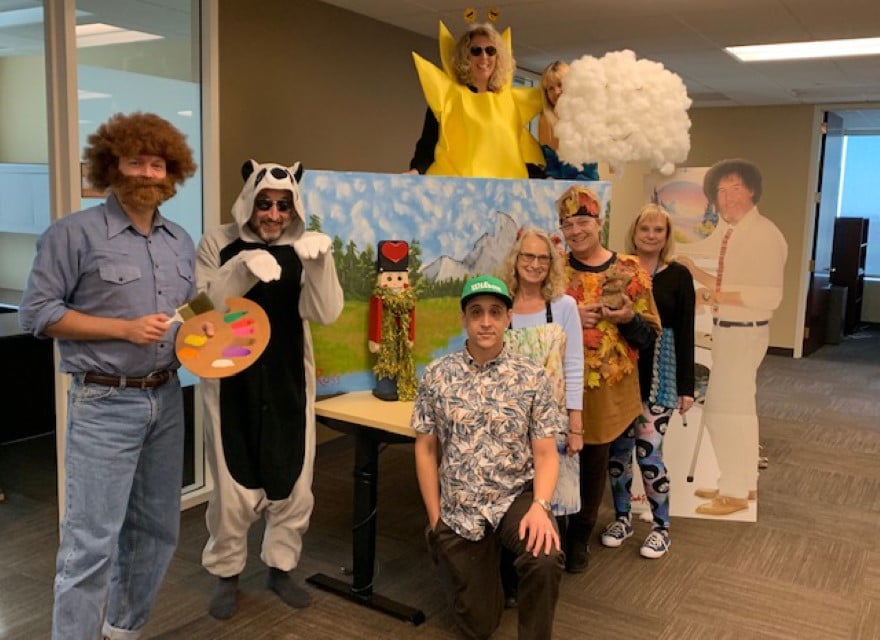 The 2019 wildfire season worsening during the last quarter, there are many lost homes still to be counted. Anyone whose primary residence was destroyed is eligible to apply for CalHFA down payment and closing-cost relief should they be looking to replace.

Then there’s CalFHA’s mixed-income, multifamily housing initiative, which Tauriainen describes as more progressive than what other states typically practice, with multiple tiers of income groups in the mix to better ensure diversity. Eight such projects are now accessing the agency’s financing options for either new construction or for acquisitions and retrofits of existing structures.

All of which makes the 2001 University of the Pacific, McGeorge School of Law grad glad she opted out of the private sector in 2007. She’s also where she wants to be, the general counsel being a self-described “property geek” who tells entertaining stories of legal issues that arose when a realtor sold a house without divulging it was haunted. Note: No ghosts that she knows of occupy the houses bought by CalFHA customers. Tauriainen adds that she feels most at home in-house at an agency entrusted with public service.

“I’ve always wanted my career to be more than just money,” the married mother of two sons and three stepsons says. “My value system is about both earning a living and serving family-plus. I’m motivated to help people who don’t know I exist. Because of the work we do, there are tens of thousands of people who have a decent roof over their heads.”

But there are many who still lack that basic need. California’s housing crunch has some communities reserving public parking lots for nocturnal camping, with school employees being among those sleeping in tents or parked cars.

Seeing it as both good business and good deed, Apple and other high-tech companies have pledged their resources to mitigate the housing shortage in such places as the Silicon Valley and Bay Area. Tauriainen applauds such measures, but advises that no one entity—CalHFA included—can do it alone.

“So severe is this housing shortage that we need every solution simultaneously and parallel,” she says. “Otherwise we can’t make much of an impact.” 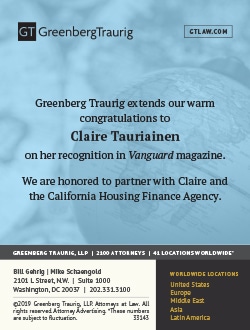 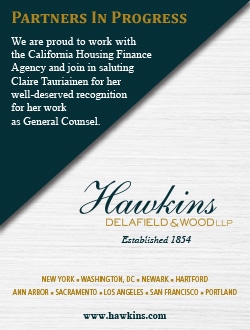 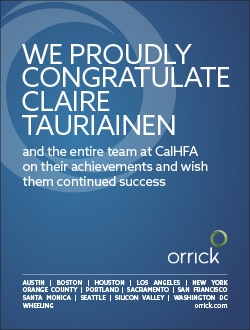