There’s a lab coat hanging in Colleen McKirryher’s office at Drew Marine’s headquarters in Naugatuck, Connecticut. She hasn’t had to wear it at the company’s research-and-development plant in nearby Waterbury, but that could change.

A chemist long before becoming a lawyer, McKirryher talks the language of those who mix some very specialized products for one of the maritime and energy industries’ leading solutions and services providers. That’s a big help when it comes to protecting formulas and advising the company on most any front.

Vice president of legal and patent protection since December 2020, McKirryher creates procedures and flows from the perspective of someone who intimately understands what’s at stake for Drew Marine and its global clientele. She nurtures relationships in a manner that might not come so readily to an in-house lawyer from a more traditional background. 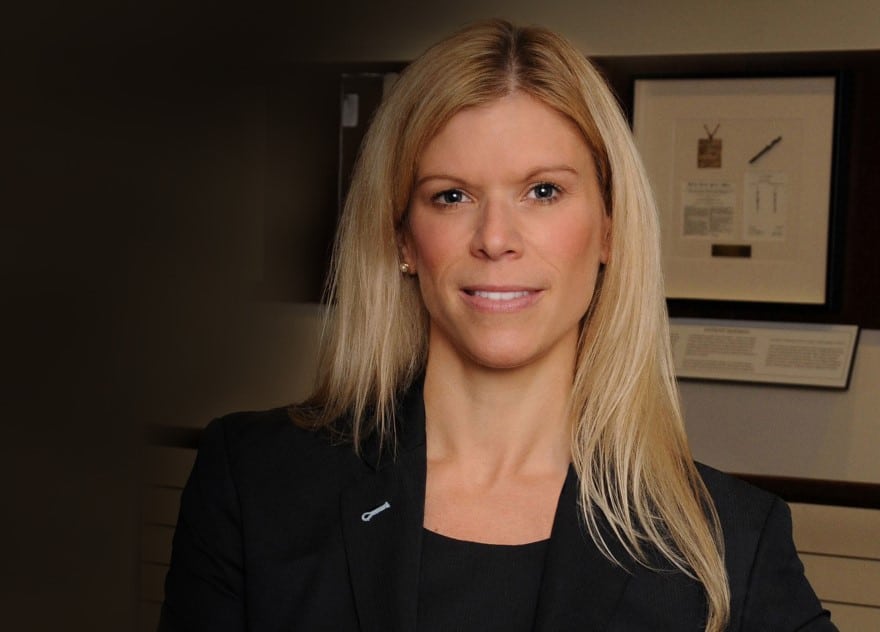 “The scope becomes so large when you combine science and law,” the personable McKirryher tells Vanguard in December. “You realize you don’t have to stop at one career point. There was a time when I didn’t even know what a patent agent was.”

She’s long since learned that and more, having been a patent agent prior to becoming a patent attorney—a big step up—after graduating Quinnipiac University School of Law in 2020 at the age of 40. A patent agent must have a background in hard science or engineering, but formal legal training is not necessary.

After passing the patent bar exam, the 30-something McKirryher had assisted innovative clients by filing and prosecuting applications with the U.S. Patent and Trademark Office. Shortly after earning her law degree, she was contacted by Drew Marine Chief Executive Officer Frank J. Monteiro, who informed her that the company had just built an R&D plant and could use an in-house lawyer with IP savvy.

“I was so excited to take that opportunity,” McKirryher says. “And as the only lawyer there was so much else to be involved in: employment law, contracting, immigration, etc.”

Drew Marine providing an array of products and services to commercial, industrial, military and cruise shipping, as well as ports worldwide, IP might have been Monteiro’s foremost concern. This also being a relatively young operation, one spun off from a larger company, McKirryher didn’t see many checks and balances in place. Her first year included a lot of basics such as upgrading contracting protocol and ensuring data privacy and IP wouldn’t be compromised.

“We’re much more organized now than we were last year,” she says after celebrating her first anniversary on the job. “We actually had gotten an email from a consultancy firm that never was under contract but still expected payment. That’s been one of our biggest projects: Working in conjunction with our chief financial officer [Chad Albano] in getting complete control of the contracting process.” 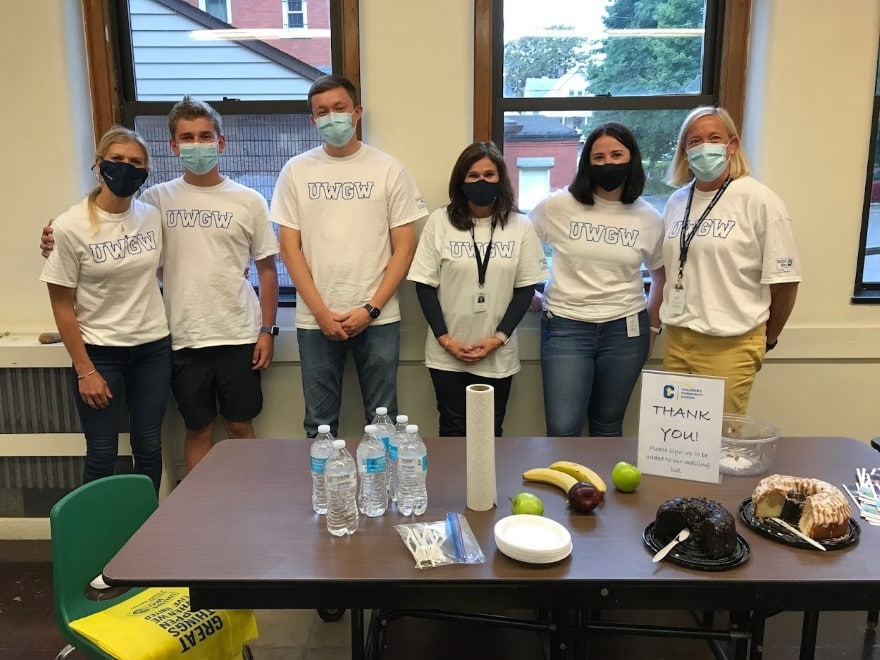 A data privacy initiative also should be complete this year. Drew Marine’s products used for water treatment, fuel management, maintenance, lubrication, refrigeration and offshore drilling, there’s extensive inventory that must comply with environmental and safety rules and regulations as well as have IP protection. Though she’s well-versed in this area, the evolving product line often has McKirryher outsourcing the filings.

The company also provides onboard support and training to ensure compliance and optimized performance, and tracks fleets. While demand for commercial shipping was heavy during the height of COVID-19, recreational cruising took a hit. McKirryher notes it’s rebounding, which bodes well for Drew Marine.

“Outside of all that, my job also is talking with the research group,” she says. “It’s always good to talk to them about new ideas, what might be in the pipeline.”

Science from the start

Law, after all, became of offshoot from McKirryher’s first interest in science. Gifted with an analytical mind, she pondered pre-med but instead opted for a chemistry curriculum at Bucknell University, where she also was on the swim team. She graduated in 2001 and, three years later, earned a master’s in chemistry from Southern Connecticut State University.

“I decided I didn’t want to do blood,” she says with a chuckle. “Chemistry made more sense to me: moving molecules around and seeing where they were going in reactions.”

That made her marketable enough, logging over 14 years with MacDermid, a Waterbury-based chemical manufacturer that’s now part of Element Solutions Inc. A senior research chemist from 2001 to 2014, she helped produce a lot of circuit boards and stayed one more year as a patent manager, a role that prepped her for her current role.

“Part of my job as a research chemist was reading patent claims and it was so intriguing to me,” she says. “I took the patent bar exam and the general counsel let me do a lot of work under his supervision. I learned so much.” 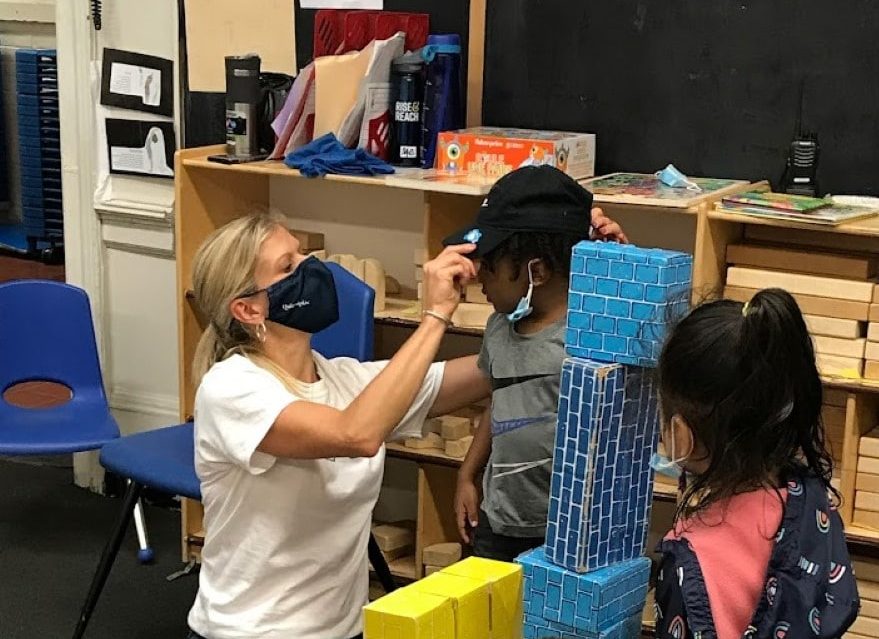 She also learned she didn’t want to be confined to a lab. One of Connecticut’s leading law firms, Carmody Torrance Sandak & Hennessey, offered her a greater role, hiring McKirryher as their first patent agent in 2015 as she enrolled, part-time, at Quinnipiac University School of Law. In 2020, McKirryher took her skillset to the prestigious national firm of Cantor Colburn where she learned from some of the best in the business, then responded affirmatively to Drew Marine’s offer.

At her core she’s still a scientist, one who tutors students taking college-level chemistry classes and serves as an ambassador to the American Chemical Society. Civic-minded, she immerses in charities with the United Way being a favored cause. Having competed as a nationally recognized triathlete not too long ago, she keeps fit.

And she wants to inspire others, including her 15-year-old son, to be all they can be.

“There are some who still look at me as if I had a third eyeball,” she says with a laugh. “Chemistry to law at age 40? But I’ll tell anybody just what cool things you can do by mixing science and law.” 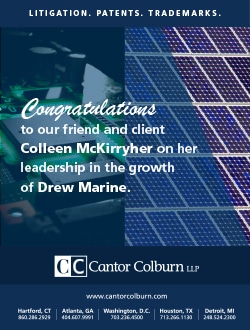