Leading the path from clinical to commercial

It is a difficult journey for a clinical stage biopharma company to complete testing and enter commercial production for a drug product, with only a handful going the distance in any given year.

Despite these odds, TherapeuticsMD embarked down this path during the late 2010s. In 2018, when the U.S. Food and Drug Administration approved three of its women’s health products, the Florida-based company saw rewards—and risks—in the transition.

This transition involved legal guidance to optimize its new status as a relatively small but aggressive company specializing in contraception, reproductive health and menopausal management. Kevin McCabe, having previously distinguished himself as in-house counsel with other life sciences companies, was brought in as associate general counsel in April 2018 to help with this transition. In a few months, he was given the additional title of chief exclusivity officer to help protect the company’s brand-name drugs from generic competition. 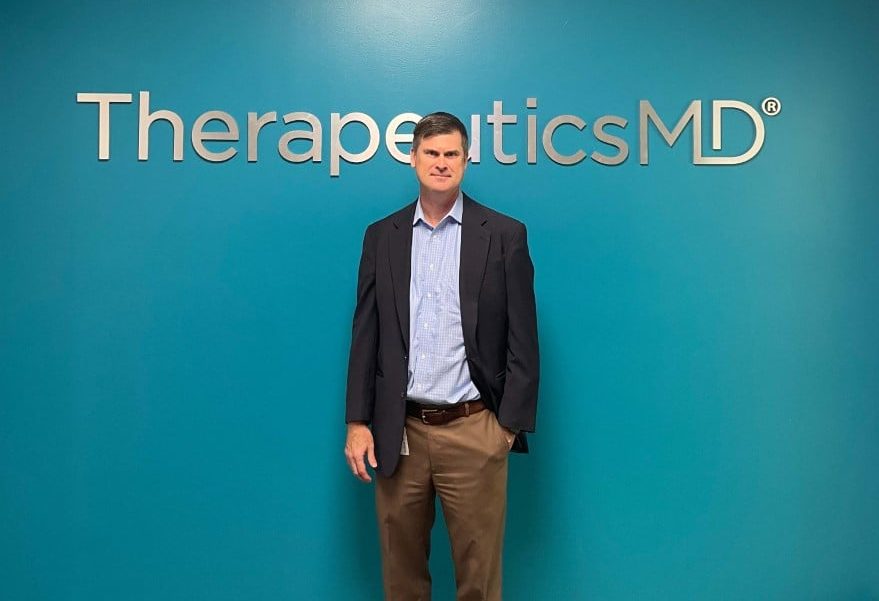 2018 turned out to be a busy year with the FDA approving Imvexxy® (estradiol vaginal inserts) in May and two more products—the contraceptive system Annovera® (segesterone acetate and ethinyl estradiol vaginal system) and the menopausal relief drug Bijuva® (progesterone and estradiol capsules)—in August and October.

“An incredible triple crown,” he tells Vanguard in September from Boca Raton, noting that the FDA approved just 59 drugs in 2018, most from the larger, more established biopharms. “An impressive total even for a big pharma company. We were extremely proud that our company with its three approvals accounted for around 5 percent of FDA’s total approvals that year,” McCabe says.

However, for him, the real work had just begun.

“Throughout my career, I have represented both branded and generic companies,” says the George Washington University Law School graduate who had contemplated a medical or scientific career as a biology undergrad and graduate student. “In my role, unless you’ve ‘switched teams,’ you really don’t know how the other team thinks or what they’re capable of doing. This insight has been a key to my success,” McCabe says.

Among the challenges are generic drug companies, which, he says, look to cut short brand companies’ substantial investments in bringing new drugs to the market. Anticipating that generic manufacturers would challenge its newly approved products, McCabe petitioned the FDA to establish guidelines for generic drug approval for one of its drugs.

Shortly after approval, two generic companies filed so-called Paragraph IV filings against two TherapeuticsMD’s products, claiming that the patents were not infringed, invalid, or unenforceable. McCabe, with the help of outside counsel, quickly achieved the “near impossible” getting both generic drug litigations stayed. The cases aren’t over, but the stays give the company breathing room to further expand its patent portfolio and continue to market its drugs. 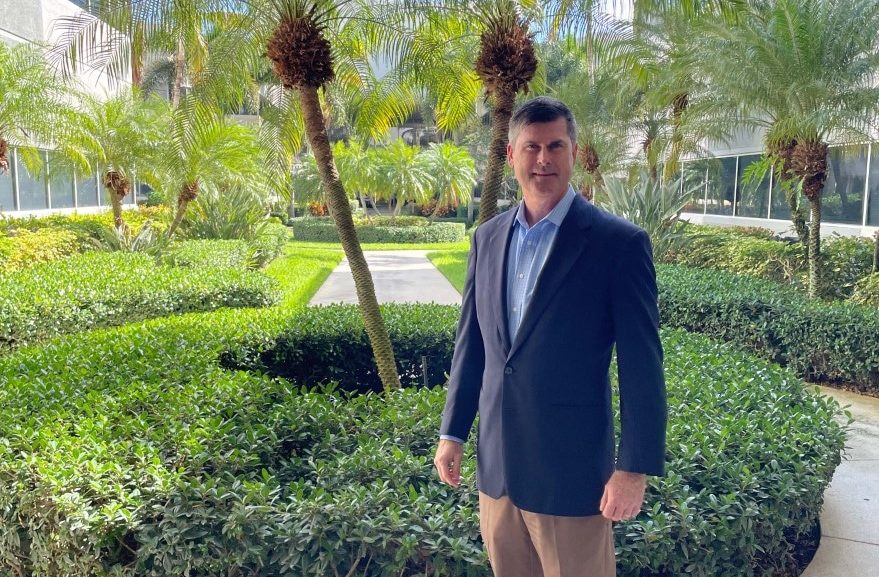 One of the drugs approved in 2018 was in-licensed from the Population Council, a New York-based global non-governmental organization whose research includes reproductive health in developing countries. This was one of McCabe’s first major projects at the company and brought in a great asset, Annovera.

Annovera is a patient-administered product providing contraception over 13 menstrual cycles. Once TherapeuticsMD licensed this product, McCabe says it was clear it would be a winner. However, at the time, the product was only protected for five years through FDA’s New Chemical Entity exclusivity. McCabe and his team reviewed the New Drug Application filing and identified and filed two sets of patents that will protect Annovera for the next 20 years.

“It was a great win for us to secure these patents and Orange Book Exclusivity through 2039 for this asset,” McCabe says about the FDA’s reference source for listing patents protecting branded drugs. “The ultimate win-win situation for TherapeuticsMD and the Population Council.”

McCabe, being a multifaceted in-house counsel, noted opportunities to improve billing practices with TherapeuticsMD’s outside counsel. Reliance on outside counsel is a necessity, and especially so during the clinical-to-commercial transition when new legal issues and questions are presented to the business, he says. 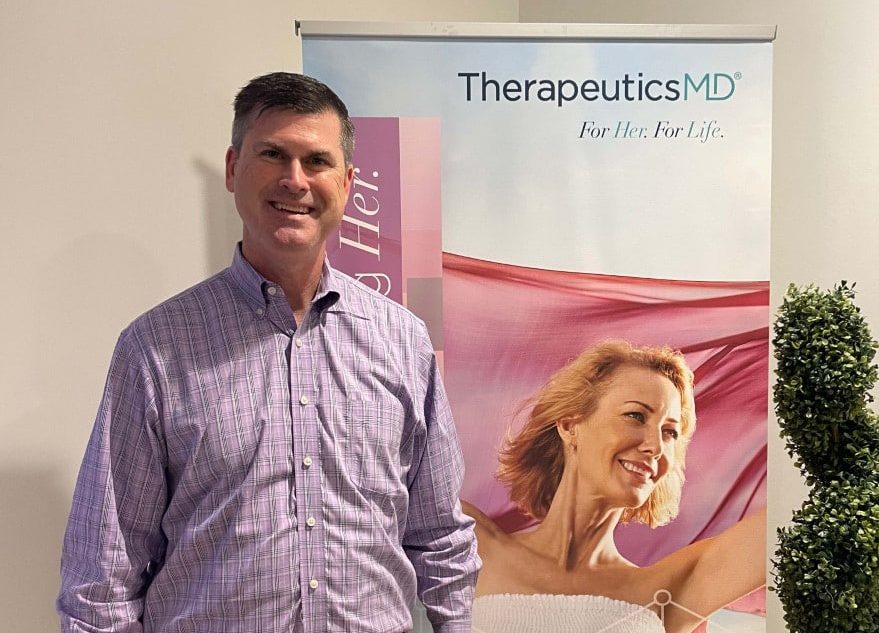 Anticipating this, he revamped the company’s billing platform and instituted a “report card” system where the legal team can have practical conversations about law firm performance. At times, the process seems not unlike a marriage counselor delving into sensitive topics. Using this system, there is a structure to ask difficult questions and revisit established relationships to make sure that they are working for both parties.

“Legal spending is always a cost and typically isn’t a value-add to the business, so we’re always concerned about costs,” he says. “You can’t always look ahead with your legal bills. It’s a reactive situation, but I knew we needed more control as we went from clinical to commercial.”

As for how TherapeuticsMD is faring, he says its goal is to break even as rapidly as possible—no small feat considering the time and cost that goes into any drug approval—and the company is excited for the day when it realizes its efforts and reports its first profitable quarter.

While interviewing for the position, management noticed McCabe’s expertise on the IP front, and told him they were looking for more than just a patent lawyer.

“I told them my career aspiration was to transcend from being a patent attorney to general counsel,” he recalls. “I knew in joining TherapeuticsMD, I would have an immense learning opportunity during the company’s rapid transition from clinical to commercial.”

His expectations were more than met. At a bigger company, McCabe commented that four or five lawyers would be doing his job. In just three years he has reassessed and updated the company’s manufacturing contracts, entered new deals with commercial insurance companies, evaluated in-house pharmacy safety vigilance practices, and ensured that TherapeuticsMD remains compliant with rules and regulations. 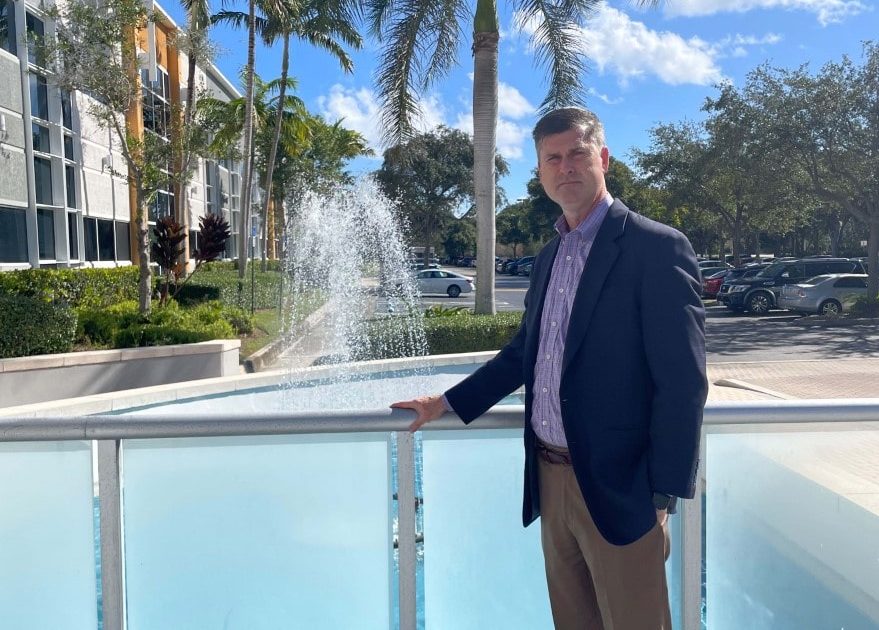 He’s making the most of his opportunities during TherapeuticsMD’s transition to a successful commercial stage biopharm company, which is a rare opportunity because most drug approvals are awarded to established commercial companies, he says. FDA review requirements are very high, McCabe says, and companies seeking their first drug approvals face pitfalls everywhere. With the company’s 2018 success, everyone is inspired to take this company to the next level, he adds.

“Then came organic chemistry and I realized, ‘OK, this is probably what I don’t want to do,’” he recalls. “Fortunately, my girlfriend [now wife] was in law school at the time and she clued me in on the niche of patent law.”

After a few years as a researcher at Genetic Therapy Inc., he enrolled at George Washington University School of Law and graduated in 1998. He honed his skills in private practice as an associate at Finnegan and later as a director at Sterne Kessler Goldstein & Fox, then became senior IP counsel at Actavis. When the company was acquired by Teva Pharmaceuticals in 2016, he was retained as an associate general counsel.

Then came the opportunity to work with TherapeuticsMD, where he knew he could make the most of his background to help the company grow as a commercial entity.

“One of my guiding principles is to work hard in the ‘now’ to anticipate the future,” McCabe says. “In our business, with its constant daily pressures, this can be hard to do, but the biggest wins in life are when we foresee the future, prepare for it, and make the right decisions in the past.” 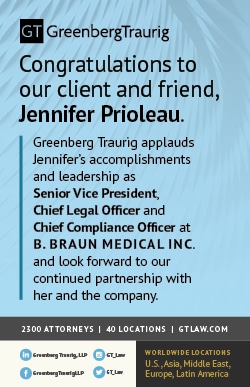 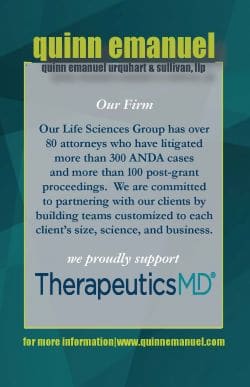 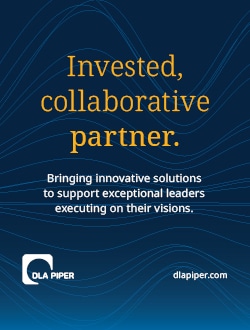 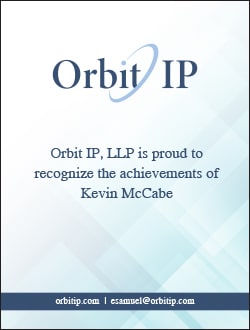 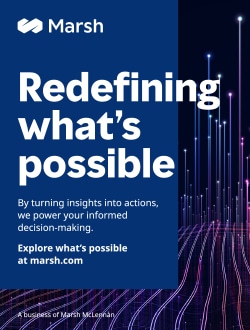 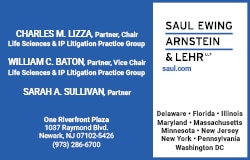