He starts discussions several months, or sometimes a few years, ahead of time when renewing a lease for Advocate Aurora Health. This gives him more leverage to set the terms because the landlord will know he’s not in a rush or under pressure.

As the healthcare organization’s senior vice president and associate general counsel, Slinkman sets and executes real estate strategy. He uses a centralized system to organize leases, which saves the organization time and money, he says.

“Our real estate strategy needs to follow the business strategy and not the other way around,” he says. “My team and I need to create value for the organization.”

Slinkman says the growth from the merger led to the need for stronger lease protocols and processes. When h e started with the organization 22 years ago, he inherited a lease management platform that he’s centralized so it tracks information in a more organized and consistent way. The platform tracks data so he knows when leases end and when he should start renewal conversations.

Advocate Aurora leases 500 locations, so organizing details of the leases is crucial, Slinkman says. For example, when leases for larger locations are up for renewal, he starts negotiations earlier so he has time to find a new location if the lease can’t be renewed.

“Leverage is the most important thing,” he says. “I can track how much we’ve saved on rent expense, although it’s harder to quantify risk reduction. You don’t know which risks you’ve avoided by having strong processes in place and I believe my team does this well.”

Slinkman also uses a “one form system,” which is another way of reducing risk. The system ensures all lease documents are consistent, which makes it less likely that costly mistakes will be made.

Through the lease management platform, Slinkman oversees the 550 leases in which Advocate Aurora is the landlord. The organization leases out office space to independent physicians on the medical staff of its hospitals. Most of the offices are on hospital campuses, Slinkman says. For example, many physicians have offices at the hospital so they can be near patients.

“Healthcare is a very highly regulated industry, with the Stark Law and Anti-Kickback Statute being involved in every lease with a physician we oversee,” he says. “The law keeps doctors and hospitals from benefitting financially by exchanging patient referrals to a hospital landlord in exchange for free or reduced office space.”

With hospitals being so expensive to run, Slinkman and his team are looking for new care center locations to house non-emergency services. The rationale? By moving outpatient services into communities, they become more patient-focused.

To make this happen, Aurora Advocate’s healthcare services team determines which services are most needed in certain areas, and then works with Slinkman’s team and a design team. Generally, they discuss the size and location of the building, and whether it would be better to lease or own.

Next, Slinkman and his team work with a broker who shows them potential sites. Slinkman then shares the sites with the business development team and, when one is chosen, he negotiates the lease or purchase. When leasing, he negotiates a tenant improvement allowance to “reduce the amount of capital the organization needs to fund a particular build out,” he says.

Sli nkman and his team recently negotiated the lease of a former grocery store, which will be converted into a new care center. Located in Naperville, Illinois, and expected to open in February 2022 , the 30,000-square-foot facility will specialize in imaging, cardiology and primary care.

He also negotiated the purchase of an undeveloped lot in Lakemoor, Illinois, where Advocate Aurora is building a new outpatient facility, which is expected to open in May 2023. While leasing or buying an existing building is more common for the organization, Slinkman says sometimes a ground up development is preferred.

Slinkman’s interest in real estate goes back to childhood, with his family’s involvement in the industry. He, however, wanted to pursue the legal side of the field.

After obtaining a bachelor’s degree in accounting, he graduated from DePaul Law School in 1992. He then worked in private practice for eight years before joining Advocate Health Care. Since then, he says the organization has more than doubled in size.

One of Slinkman’s favorite parts of the role, he says, is partnering with so many different departments and seeing how his work plays into the larger picture of the organization. And, unlike with litigation or other types of law, he can see the physical outcome of his work.

“Real estate is a very tangible area of the law, which I enjoy,” Slinkman says. “I like driving past facilities and knowing I had a role in securing that space. I may not have hammered anything or created the design, but I still added value and was part of the process.” 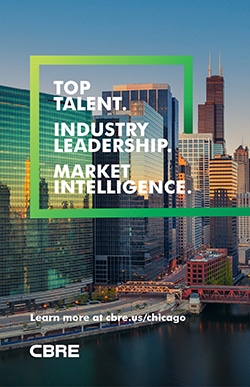