All the right tools for the job

In baseball, a five-tool player is someone who rates above the norm in speed, throwing, fielding, hitting for average and hitting for power. It’s a term reserved for the greats of the game, like Mike Trout and Mookie Betts, or Barry Bands and Willie Mays.

Jeffery DeArman may not be a big baseball fan, but he’s got at least five tools: experience and excellence in commercial lending, business law, real estate, litigation and employee relations. Those skills, and how he uses them, are part of what makes him ideal for his role as the chief legal officer and corporate secretary for Ram Tool Construction Supply Co. in Birmingham, Alabama, he says. 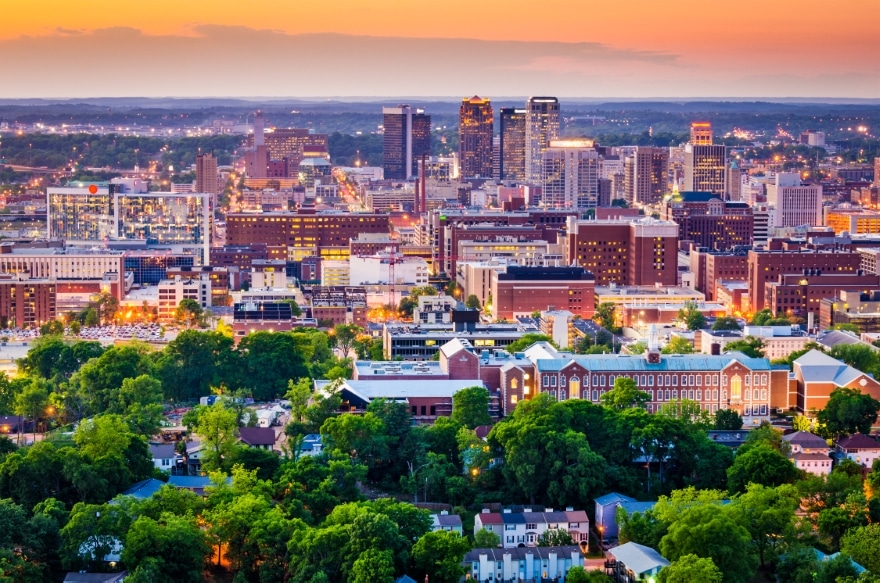 Whether opening new locations, drafting contracts with vendors and customers, or handling the occasional litigation, DeArman’s says he uses the tools he’s acquired over his 20-year career to support the family-owned company.

“My background lends itself to be able to do both of those things,” DeArman tells Vanguard on a spring day in Alabama. “They wanted someone more seasoned and someone who’s seen things from a variety of angles.”

Building from the ground up

Ram Tool, a supplier and distributor for the construction industry, was founded in 1967 and has been in the Head family since the 1980s. The company’s local warehouses and online shop contain thousands of products, from hard hats and safety goggles to bolt cutters and hacksaws, and Ram Tool will deliver the products virtually wherever and whenever its customers need them, DeArman says.

DeArman was hired in 2019 because of his two decades of legal experience, including time working with Ram Tool—it’s how the relationship got started.

As part of his role, DeArman has been at the forefront of the company’s response to the COVID-19 pandemic. As an essential business, none of Ram Tool’s 43 branches shut down, meaning no leases were terminated, but the company did pull back on several projects to see how the pandemic progressed. The company has opened some new branches since the pandemic hit, and DeArman was instrumental in the acquisition of a small, one-store company that was folded into Ram Tool. 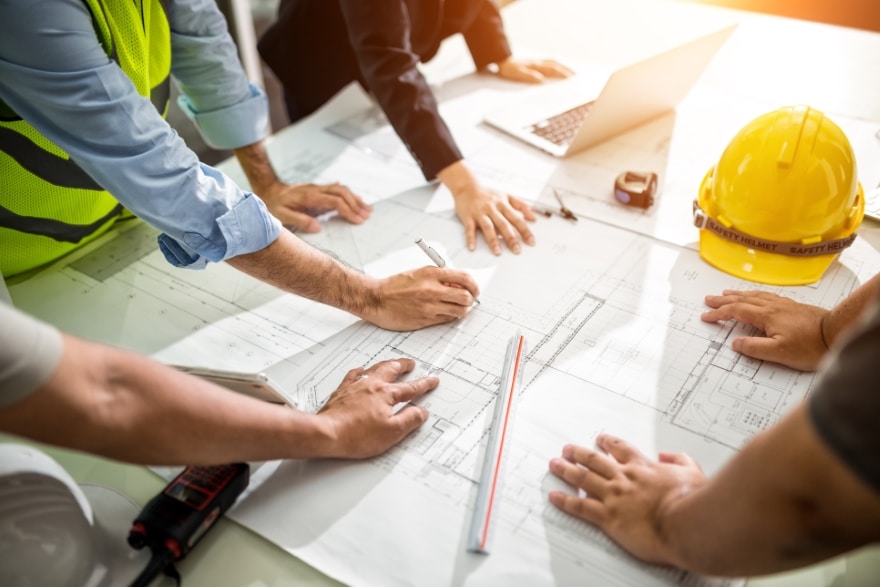 “Now, we’re ramped things back up, and while we’re not in the same growth mode as before, we’re understanding the impact of COVID-19 and are trying to stay safe and be opportunistic and grow our footprint.”

There haven’t been any opportunities to move into spaces vacated because of the pandemic, but DeArman says he and others at Ram Tool are evaluating new locations. In fact, his experience in real estate law is one thing that Ram Tool executives liked when DeArman was hired, he says.

The company has offices and stores in Alabama, Florida, Oklahoma, Virginia, West Virginia and Texas—DeArman helped establish a COVID-19 hotline for Q&A and to provide updates to employees. There’s been conversations about safety protocols, quarantine policies, exposure and positivity concerns and more.

“Because we are in many states, our operational settings are different from branch to branch, so we’re mindful of what each community has been dealing with,” DeArman explains. “We’ve done well, we adjust when necessary and we’re still providing the services our branches need,” he says.

DeArman says the biggest challenge moving in-house after two decades of working in law firms is a lack of familiarity with the company and the culture. It took about 18 months for him to get a firm understanding of Ram Tool. It’s a work in progress, he adds. 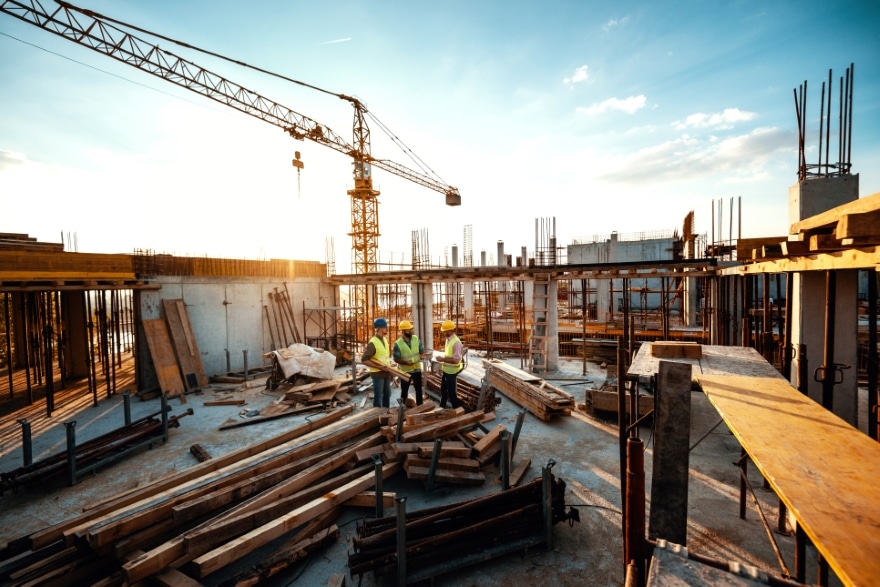 Now that he has more understanding, DeArman says he’s exploring how the legal department can simplify processes without creating potential liability. Knowing why things are done a certain way, and the reason for each step, makes it easier to simplify and streamline, he says.

“One of the ongoing challenges is getting the employees to understand that the legal department is a resource and not a roadblock,” DeArman explains. “We’re not out to get anybody, but we are out to find solutions for problems and ways to make things better.”

See you at the crossroads

DeArman admits he never considered a career in law until he got to college, but the choice didn’t surprise friends and family. After graduating from Williams Jennings Bryan College in Dayton, Tennessee, he earned his law degree from Sanford University’s Cumberland School of Law in Birmingham, Alabama.

His first job after law school was as an associate at Lange, Simpson, Robinson and Somerville. After three years, DeArman spent the next two years at Walton, Wells, Anderson and Bains. For the next 15 years, he was an attorney and then partner at Adams and Reese.

“During the first phase of my career, I had some success, had a busy and active book of business and anticipated that would continue,” DeArman says. 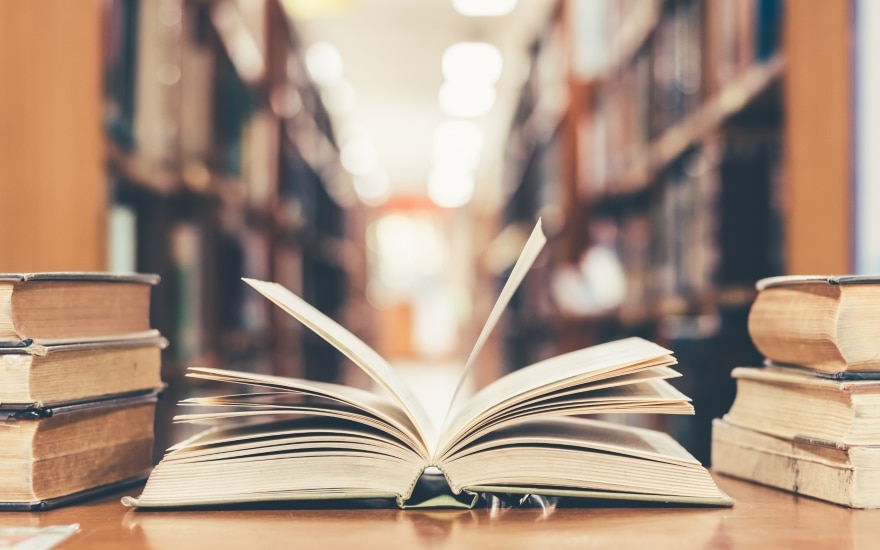 Despite the feeling that after 20 years working in law firms—and the thought that he could easily do the same thing for another 20 years—DeArman says he came to a crossroads. He had always been curious about working in house, and he joined Ram Tool in July 2019. What was there to lose?

While he says the next job is never exactly what a person expects, his time at Ram Tool has been “incredibly rewarding.” Every day is different, and he likes striking the delicate balance between making quick decisions while also collaborating with the right people and departments.

“I’m busier now than ever before, and the decisions I’m making have an impact on the entire company, not just a specific department or individual,” DeArman says.

A home run of a job. 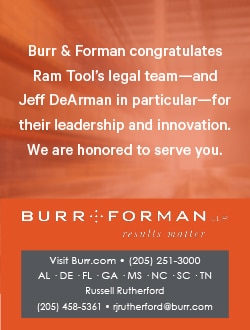 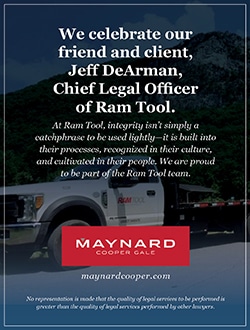