People are the practice for this chief employment counsel

Employment law is the family law of the corporate world, says John Hamlin.

It’s the practice area where emotions can run highest, he goes on to say, in his case encompassing workplace legal issues and policies that affect more than 80,000 Marsh McLennan employees working around the world.

Now the chief counsel for employment, benefits and governance, Hamlin joined Marsh McLennan as it was recovering from the loss of 295 employees and 63 consultants in the 9/11 attack on the World Trade Center. As he celebrates his 20th anniversary with the company, he’s helping guide its return to the office as the COVID-19 pandemic shows signs of receding. 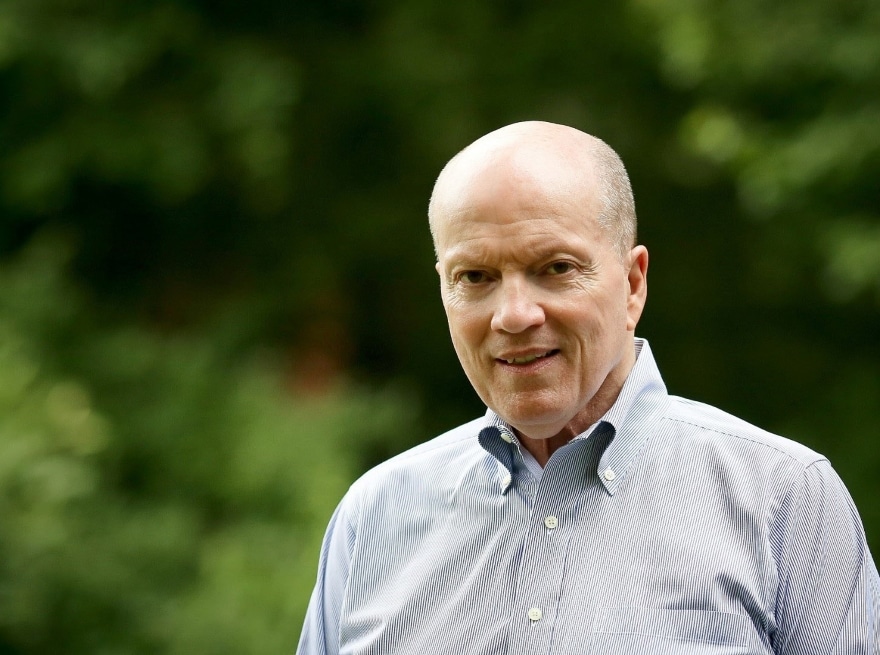 Throughout his tenure, Hamlin says the relationships he’s built have been essential to advising on hiring, creating pandemic guidelines and supporting diversity, inclusion and equity efforts.

“We’re a premier professional services firm, and our people are at the core of our service offerings,” Hamlin says. “I have to have the trust of the organization and understand the business objectives to be able to help them navigate the complexities of employment law, compliance and risks.” 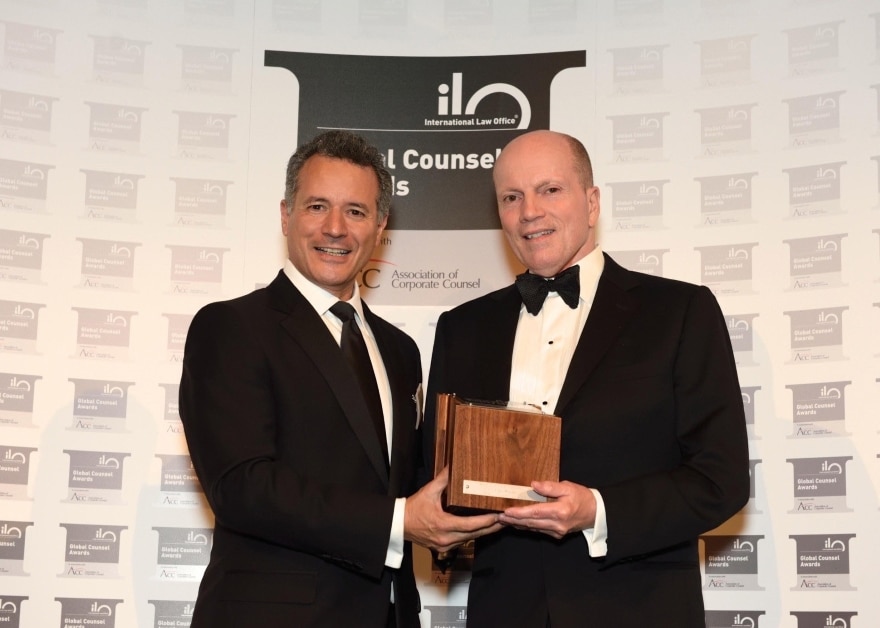 “We’re in the business of supporting clients in risk, strategy and people,” Hamlin says. “We provide risk management, broker insurance and reinsurance, and consult on HR and employee benefits, as well as investments and financial services.”

“More and more of our work involves advising on HR compliance matters,” Hamlin says. “An employment lawyer today spends much less time on disputes than on advising on strategies to comply with the incredibly complex employment regulation in the U.S. and globally.”

In 2019, he advised on integrating 10,000 new employees working in 90 countries as part of Marsh McLennan’s $5.6 billion acquisition of Jardine Lloyd Thompson Group. It was the largest acquisition in the company’s history, and it required Hamlin simultaneously onboarding new employees around the world and working with HR on the acquisition, including advising on employment law aspects of the global legal entity integration.

Less than a year after the JLT acquisition was completed, Hamlin and his team were responding to the COVID-19 pandemic. He says CEO Dan Glaser was clear that during the height of the crisis, the company would not pursue furloughs or pay cuts.

Hamlin serves on the company’s crisis management team that responds to pandemic issues and advises employee relations and HR on workplace safety issues, including testing and screening, return to office approaches, and medical-disability and religious accommodations. For the most part, he’s been working remotely since March 2020. 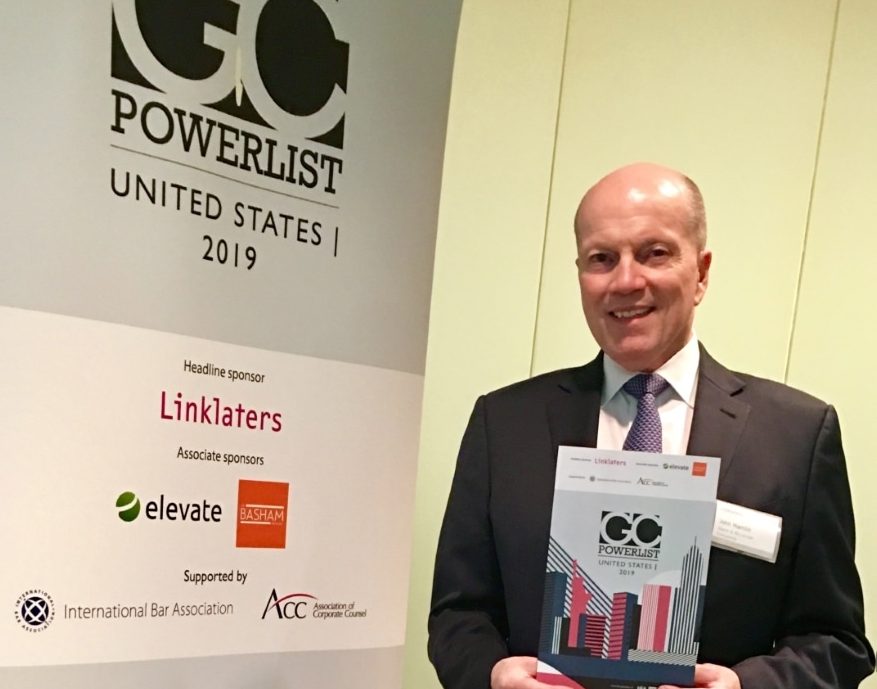 While he says employees are beginning to return to the office, “it’s clear that the workplace has changed forever, we just aren’t yet sure how exactly.”

He also advises the company on its diversity, equity and inclusion efforts, ensuring compliance with all applicable regulations. “As a gay man, I appreciate that it’s a privilege to work at a company that values DEI and a culture of inclusion,” Hamlin says.

While growing up in Buffalo, New York, Hamlin’s aspirations were more literary than legal. He earned a bachelor’s in English literature from The College of Wooster in Ohio and then a master’s in the same field from the University of Connecticut. However, as he earned those degrees, Hamlin found he wasn’t interested in an academic career.

“I needed something more rooted in the pragmatic and law combines the intellectual, the analytical and the practical,” Hamlin says. “Lawyers are problem solvers, and for me, I was also thinking about what I did well, and what would allow me success and a greater purpose.”

After earning his J.D., also from the University of Connecticut, Hamlin served as a law clerk for a year for Judge B. Avant Edenfeld in the U.S. District Court for the Southern District of Georgia beginning in 1988. Before joining Marsh McLennan in 2002, Hamlin was in private practice with Wiggin and Dana LLP in New Haven, Connecticut, from 1989 to 1991; and at Paul, Hastings, Janofsky & Walker LLP in the New York City area from 1991 to 2002.

Working in private practice enabled Hamlin to become an expert in areas of employment and labor law while also shaping him as a “pragmatic generalist,” Hamlin says.

When joining Marsh McLennan in 2002, Hamlin was impressed by how the company cared for its employees and the families of victims. The experience still shapes how he works with his team and Marsh McLennan’s business divisions.

“It’s always about doing what’s right, about focusing on the greater good while doing your best work,” Hamlin says. 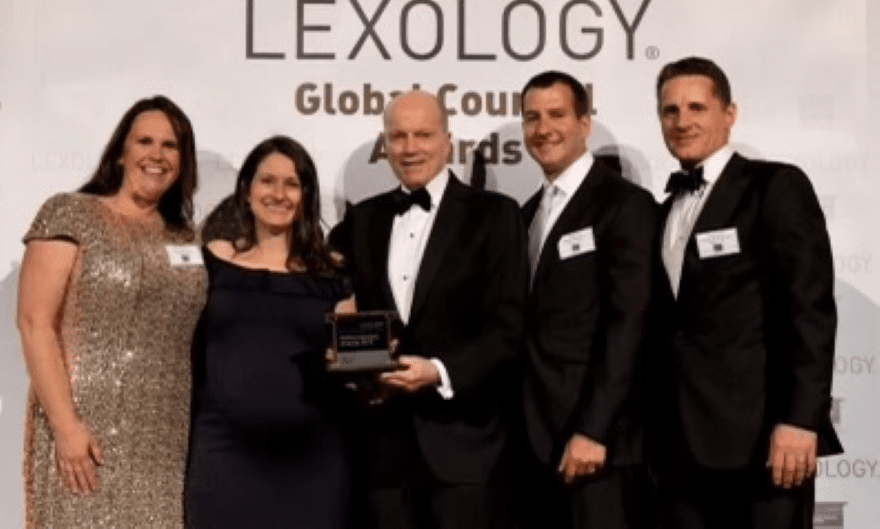 Hamlin is also a Fellow of the College of Labor and Employment Lawyers. Outside the office, he and his husband enjoy theater and the arts and he sits on the board of the Music Theatre of Connecticut.

“One of the things that makes my work so exciting is the constant, dynamic development of workplace regulations. The pace of change is extraordinary,” Hamlin says. “I work with an exceptional team, and the lawyers in our department are extremely talented and a pleasure to work with. I feel truly lucky to have had this career and to do what I enjoy doing at Marsh McLennan.” 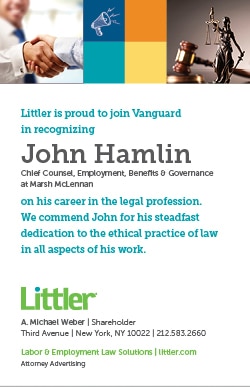 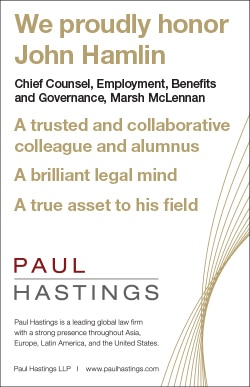 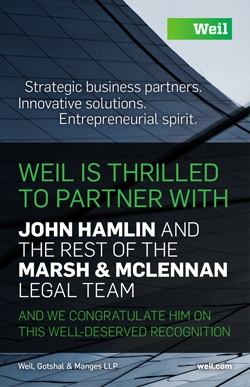 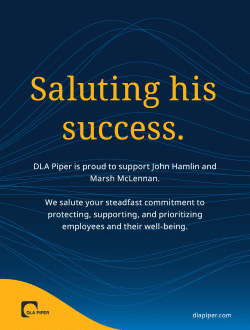 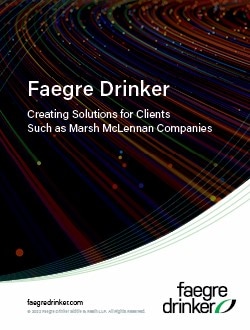 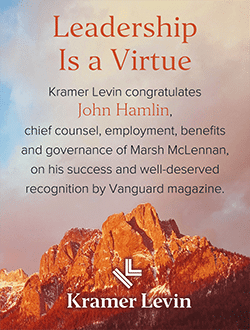 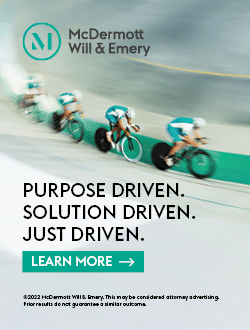 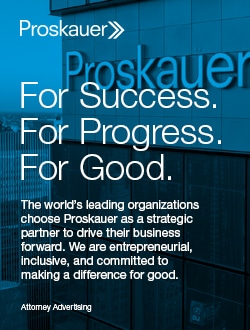 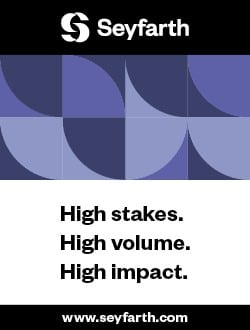