In the driver’s seat

Flat tire? Dead battery? Overheated engine? Need a tow? Been in an accident?

Just call the number on the card and within an hour’s time, one of AAA’s providers will likely be beside your troubled vehicle. Or maybe your house, if it’s been damaged by fire or falling limbs, and you had the foresight to buy AAA homeowner’s coverage. 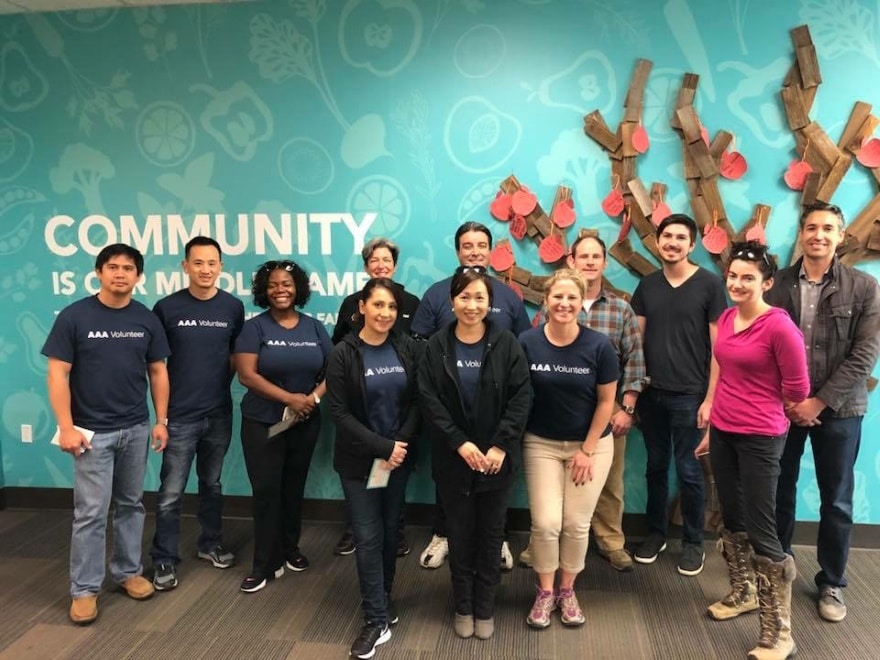 Those aspects of AAA’s service will continue, but changing times dictate new operations that accommodate the demands of a more progressive membership. It’s a role that Kamili Moreland seems well-positioned to fill in her new capacity as general counsel and corporate secretary of AAA Northern California, Nevada & Utah (AAA NCNU).

“I grew up knowing AAA, my parents and grandparents used it, and I became a member when I turned 16 and received my driver’s license,” says Moreland, the first African-American woman to hold the regional association’s top legal position. “AAA has always represented safety to me, and always will. But we have to stay relevant into its second century.”

Moreland has been a member of AAA NCNU’s legal department since 2011. Following her September promotion, there’s much for her to weigh in on, including the phenomenon of self-driving cars.

Just before climbing to the top of AAA NCNU’s legal ladder, Moreland’s responsibilities included helping to facilitate the purchase of GoMentum Station. The largest of 10 federally recognized autonomous vehicle testing facilities in the United States, GoMentum operates on a 2,100-acre spread that used to be the Concord (California) Naval Weapons Station, with more than 20 miles of paved roadways where companies such as Honda, Toyota and Lyft test their vehicles.

“We aim to be the foremost authority in autonomous vehicle safety,” Moreland tells Vanguard, explaining that AAA NCNU has also partnered with Torc Robotics to develop universal safety criteria. “Much like the AAA diamond rating for hotels, we strive to be the diamond rating for AV safety.”

There’s no cutting corners, she’s quick to say. While driverless cars seem inevitable, AAA NCNU proceeds with caution. That said, it does benefit from a head start, having launched a driverless shuttle pilot program in Las Vegas late last year, drawing rave reviews from almost all of its 30,000-plus riders.

The AV route is part of a larger strategy to market AAA’s services to the younger generation, Moreland explains, adding that while millennials enjoy traveling, they’re less inclined to invest in their own vehicles; hence, challenge and opportunity alike for AAA NCNU.

The association’s historic travel business finds new relevancy through its focus on innovative tourism—large trip planning as opposed to the day-to-day flight bookings. And AAA NCNU has high hopes for its GIG Car Share going national and then some. 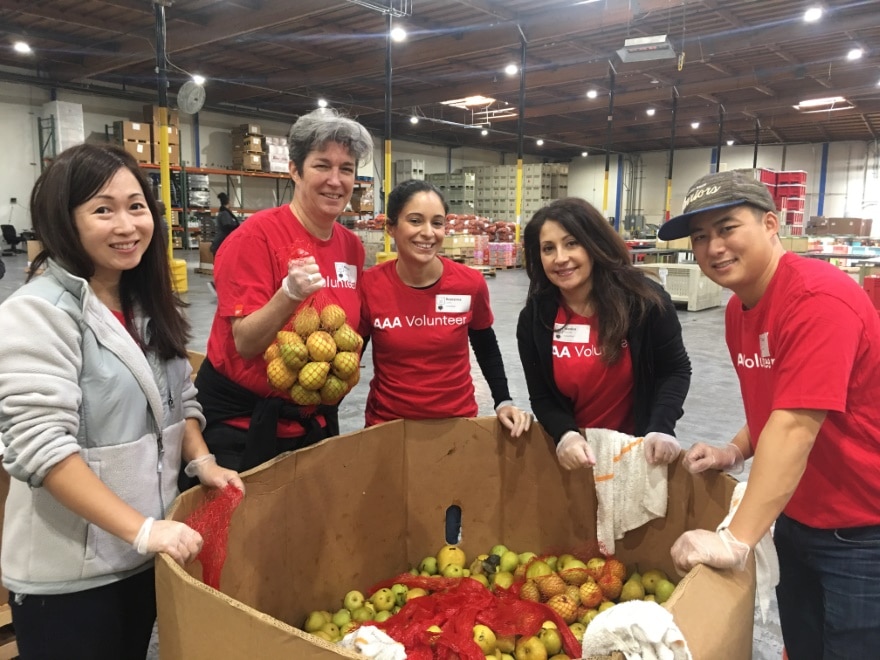 Launched last year and now active in a region encompassing Oakland, San Francisco, Berkeley and soon-to-be Sacramento, GIG allows for an electric or hybrid vehicle to be picked up in one location and dropped off in another—essentially going a step further than Zipcar. AAA NCNU is partnering with other AAA clubs to bring the program elsewhere, and while Moreland would never want to apply the brakes on an enterprise with such potential, she again emphasizes that the rollout must be prudent.

“We do have to consider and plan for the risks—what happens if a car is stolen or used inappropriately? But there’s much to be excited about—a future that will include fully electric, zero-emissions cars and how it addresses evolving transportation needs.”

At 46, Moreland falls conveniently enough between the millennials and AAA NCNU’s more traditional customers, giving her insight into the needs of each. It’s a role that is fulfilling in different ways than the law firms she joined following her graduation from the University of San Francisco School of Law in 1997. 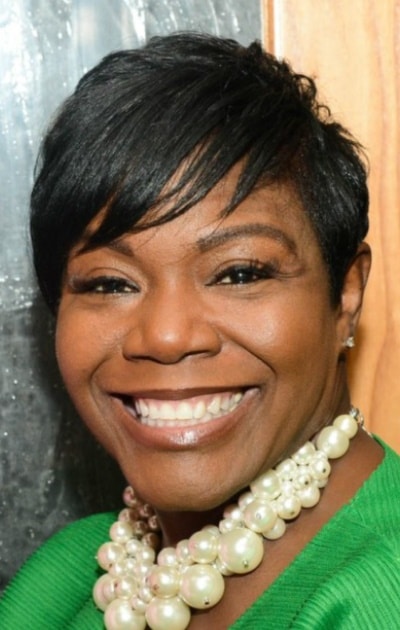 Thus, an almost daily reminder of the greater responsibility in Moreland’s position. But listening to her describe her background and philosophy, one gets the impression that she’s always been a big-picture type.

Growing up with two older siblings and a single mom in East Palo Alto—in her words, “the nation’s murder capital” during the 1990s—presented challenges no young person should have to endure. A good student nevertheless, Moreland attended private schools on scholarships and would go on to be a Dean’s List poli-sci student at Spelman College in Atlanta.

“Spelman gave me confidence I didn’t have growing up,” she says. “It opened doors for me and gave me the tools to succeed.”

Having witnessed plenty of her hometown’s residents in need of legal services, Moreland pursued law, eager to make a positive difference. Her externships included stints with a pro-management firm, the National Labor Relations Board and a nonprofit pro-employee side organization—adding up to a background that made her an attractive associate at Carroll, Burdick & McDonough. A partnership was to follow at Seyfarth Shaw, where Moreland still might be if not for personal reasons.

“After making partner, I still had the passion to practice law, but wanted to do so in a different way,” she says. “I had a young son and needed to change my work-life balance. In-house seemed the way to do so.”

That son is now 14 and starting high school, and her husband brought her “two bonus children”— both recent college graduates; one embarking on a marketing career and the other with eyes on medical school.

So, seven years after joining AAA NCNU, Moreland’s more convinced than ever of the wisdom of her career shift, lauding its commitment to diversity and inclusion, not to mention a more favorable work-life balance and opportunities aplenty to sustain further relevancy in an association that’s long been part of her life. 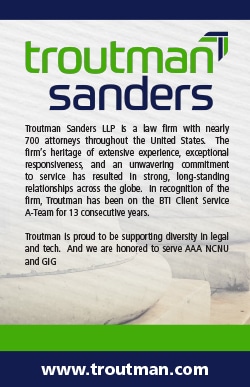 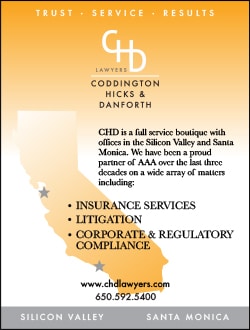 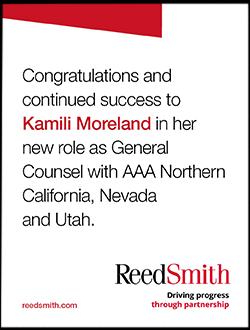 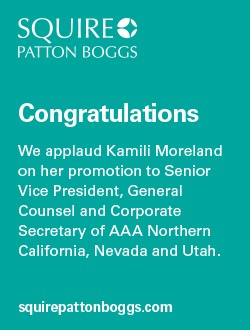 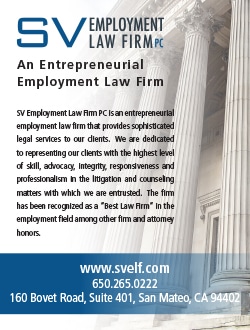