Located in Palo Alto, California, SAP Ariba is a software and information technology services company that has long led the industry with technology that facilitates and improves procurement procedures for companies of all sizes. Founded in 1996 as Ariba Inc., the company was purchased by German software company, SAP SE in 2012, subsequently becoming known as SAP Ariba.

Born out of the late ‘90s dot-com boom, Ariba streamlined the procurement process by using technology to turn what was once a labor-intensive, paper-based operation into a process that saves companies millions of dollars a year on everyday goods such as office supplies. By combining cloud-based applications with a global network of trading partners, Ariba allows users to source or sell goods 24/7 and has grown to become the busiest commerce network of its kind.

Leading the legal department at SAP Ariba is general counsel Landon Edmond, who has been with the company since the heady dot-com boom days of the early 2000s when the company’s market capitalization was as high as $40 billion. 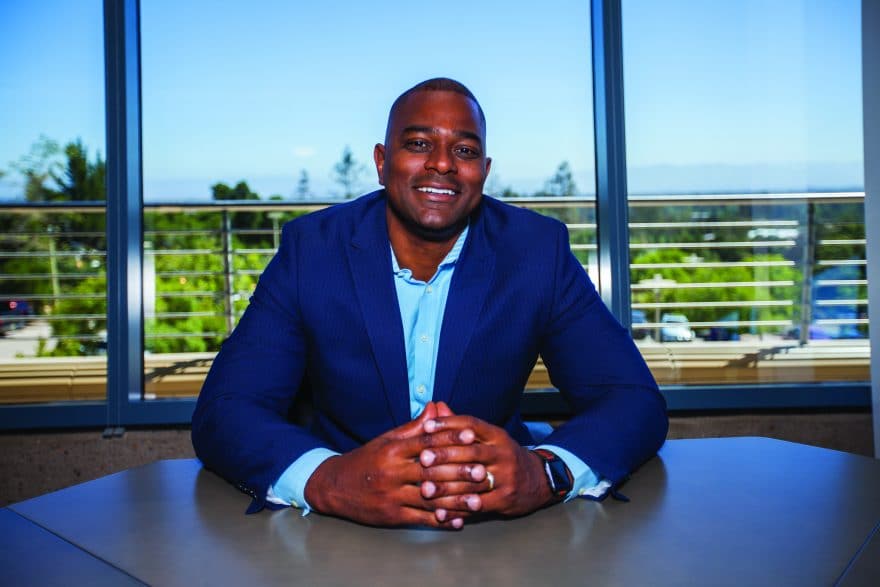 “I was working in intellectual property litigation and other commercial litigation at a large San Francisco law firm and wasn’t really looking to make a change or become a transactional lawyer, but I had friends from law school who had made their way to in-house positions and it just seemed like a better quality of life,” says Edmond. “This was during the dot-com era when people were saying if you can read a contract, you can become a transactional lawyer.”

Not won over by his early experience with life at a law firm, Edmond relished the chance to ride the dot-com wave not only for the promise of better quality of life, but also for the opportunity to become more involved in the world of business.

“I didn’t see myself long-term as a partner in a law firm and knew at some point I was going to make the transition to in-house,” he says. “It’s important as a general counsel that you are a businessperson first and part of the sales cycle from start to finish.”

Edmond was also intrigued by the unique value proposition that Ariba was offering and, more importantly, believed it could weather the tumult of those early dot-com days.

“The company was transformational. It took a simple concept to a whole different level and companies like Ford and General Motors adopted it early on to more efficiently and effectively manage their spending. These are companies that knew, to the penny, how much it cost to build a car, but when it came to indirect costs like pencils and paper, they had little or no insight into what they were paying,” Edmond says.

Unlike many other companies that popped up during the dot-com boom, Ariba’s value proposition was relatively simple. “When you buy in bulk, you save money. So we really started by selling savings. It was very easy to understand and from there we branched into helping companies manage not just their spend, but all of their commerce activities – from sourcing and orders all the way through invoicing and payment – in an automated way,” he says.

Edmond’s arrival at Ariba marked a period of change for the company. Shortly after he joined the team the stock price began to plunge with pundits forecasting the company’s impending demise, but management remained confident in Ariba’s time-tested value proposition.

“Internally we were very confident about our execution plans; we have a solution that saves people millions of dollars, and if we execute on that, it doesn’t matter what the rest of the economy is doing, we’ll still save people money,” he says.

While the company did have to shrink its payroll in a bid to stay competitive, Ariba emerged from the prolonged period of economic stagnation and attracted the attention of software giant SAP SE, which purchased the company for $4.3 billion in 2012. “I’m very proud of this journey, from being at the bottom to being acquired for $4.3 billion,” states Edmond.

Edmond’s job has continued to evolve as SAP Ariba has grown to become the largest business-to-business network in the world based on transaction volume (nearly $1 trillion annually) and is consistently atop the rankings for global procurement solutions published by leading research firms. While he initially joined the company as an associate general counsel, Edmonds stepped into the top legal role in 2013.

“I don’t feel like I’ve been with the same company for 16 years. It’s changed: what started as a simple procurement engine has now grown to a network of millions of suppliers across the globe with and billions of dollars being transacted,” he says. “The job isn’t the same because the things we sell are different, the scale is different and the companies we’re dealing with are different.”

While many of Ariba’s early customers were fellow dot-com startups, the company’s technology is now used by some of the world’s largest corporations, including many Fortune 100 brands, thanks to its conversion to cloud-based operations. “We’ve seen a huge uptick in sales and saw large-scale customers, including banks and other institutions, start adopting SAP Ariba solutions,” he said.

Edmond’s interest in law was originally piqued by the O.J. Simpson trial that engulfed the country in the mid-‘90s. “I went to law school thinking I was going to be a criminal defense attorney — my criminal procedure professor in law school actually came up with the ‘If it doesn’t fit, you must acquit,’ line from the Simpson case — so it seemed very interesting,” he says.

A lifelong basketball player who stands 6’ 8”, Edmond was intrigued by the competitive aspect of litigation. “Like basketball, it’s a competition to see who can be best prepared,” says Edmond. “I had a love of competing and saw litigation as a way to keep doing that.”

While Edmond hasn’t played basketball at a competitive level since college at the University of South Florida, where he turned down offers to play professionally overseas in lieu of law school, he has not left the hardwood too far behind. “My son is only 11, but he’s a big dude. My daughter is a second year varsity player and an all state nominee as a sophomore in high school. Most of my free time is spent in the gym with them because I know how much influence coaches had on my life and the opportunity I get to challenge young people on the basketball court is truly a metaphor for competing in life,” he says.

With a competitive spirit, passion for healthy competition and 16 years’ experience with an industry-leading company, Landon Edmond, general counsel at SAP Ariba will ensure that the global procurement company continues to tread a safe legal path.