Defending Mr. Cooper in and out of court

As the vice president and associate general counsel in charge of litigation for Mr. Cooper, LeAllen Frost has the dual role of managing the outside counsel that argues cases for the company and addressing important internal company matters.

“In my role, I get to manage significant litigation, which has always been enticing, but I also get to dive into the day-to-day operations of the business, and that is one of the most interesting parts of the job,” Frost tells Vanguard during a late summer day outside of Dallas. 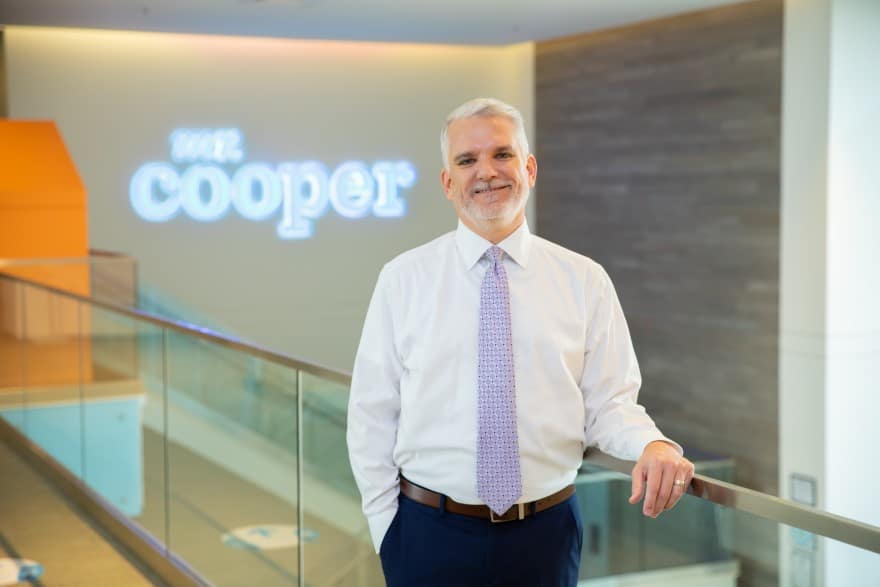 As a residential mortgage company, much of the litigation facing Mr. Cooper are lawsuits brought by homeowners in foreclosure, some of which are class actions. While the COVID-19 pandemic and restrictions banning foreclosures have slowed the number of suits filed against Mr. Cooper, Frost expects things to pick up again in the second quarter of 2022.

“And we’ll be ready with our litigation team to defend our business while always keeping our customers top-of-mind as best we can,” he says.

As an in-house litigation attorney, part of Frost’s job—for better or for worse, he says—is sifting through cases to determine which are legitimate and which are frivolous. Once he’s done that, the litigation team will evaluate each matter, look at each plaintiff and look at the claims made against Mr. Cooper. If possible, he looks to resolve issues outside the courtroom.

“We always try to resolve cases early, because an out-of-court resolution is almost always best for all sides. But we’re not afraid to go to trial either,” Frost says.

In the end, many of the people involved in litigation remain Mr. Cooper customers, so coming to an amicable resolution is important for continuing a positive servicer-borrower relationship, he says. Mr. Cooper’s guiding principle is to keep the dream of homeownership alive, and Frost explains that the legal department takes that same approach to litigation. 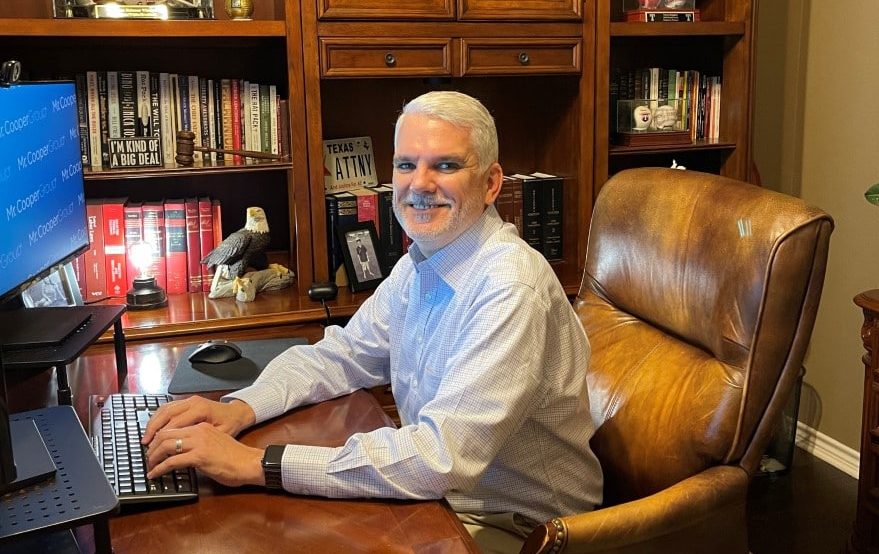 The first thing he instructs outside counsel to do is to contact opposing counsel and find out what their client really wants. If Mr. Cooper can resolve the case early with a modification or other loss mitigation, it benefits the borrower, the company and its investors.

“We continue this approach and focus throughout the litigation if it doesn’t resolve early, always looking for a way to end the case in a manner that helps the borrower and preferably keeps them in their home,” Frost says. “Of course, if we can’t, we will vigorously defend the case. But our top priority is an amicable resolution.”

Cases of all types

Mr. Cooper operates in all 50 states, the U.S. Virgin Islands and Puerto Rico, which means there are different courts, different judges, different laws and different jury pools. Understanding the quirks of the jurisdiction can be the difference between a successful outcome or a negative result, Frost has learned.

One of the challenges facing any highly regulated company is understanding and complying with laws and regulations from so many different states and agencies, Frost says. The same holds true in litigation, where he has to understand how each state’s laws affect the circumstances of the case. That requires staying up to date on changes in the laws, but it also makes the legal team’s relationships with outside counsel crucial.

But it’s not just their own firms that can affect the outcomes of cases, Frost explains. Occasionally, he and his team sit across from the same plaintiff’s counsel on more than one case, which can, in certain circumstances, makes coming to an agreement easier. 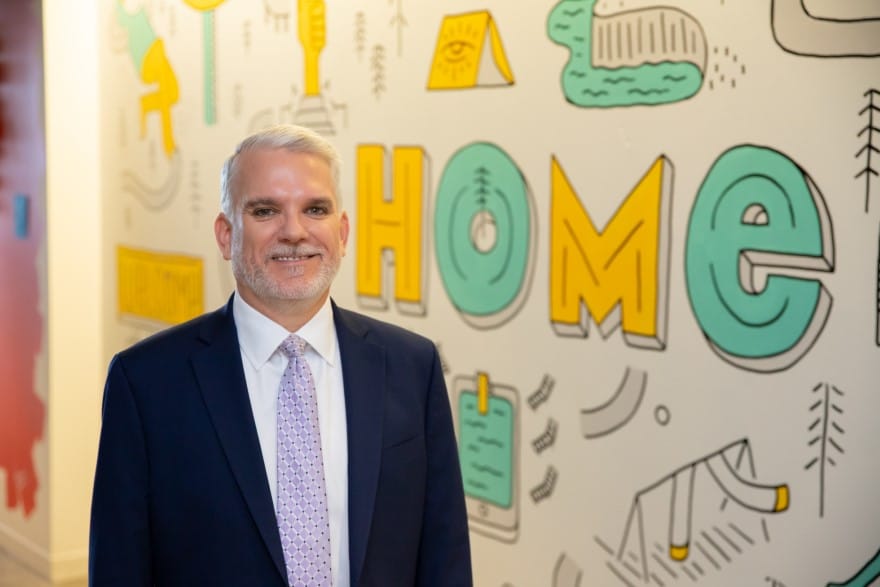 “This is particularly true when we are up against counsel that understands we share the same goal of taking care of our customers,” Frost said.  Beyond counsel familiarity, Frost explains how Mr. Cooper works to predict case outcomes.

“There are so many factors that go into these cases and these resolutions, and we use analytics to try and figure out models for how to settle cases,” Frost says.

Some cases against Mr. Cooper result in a payout far less than the potential loss, so it looks like a win, Frost says. Sometimes, it looks like the person suing Mr. Cooper has won, but the outcome actually works for the borrower and the business, “which is always what we aim for,” he says.

“We want to keep borrowers in their homes, and we’re not the kind of company that approaches litigation as ‘win at all costs,’” Frost says. “If we keep our borrowers happy, it’s better for us.”

To that end, Frost says some internal initiatives, like the overall investment in technology, have helped create a positive experience for borrowers.

Frost didn’t always dream of becoming a lawyer, and he has no other lawyers in his family besides his older brother. But in high school, Frost participated in speech and debate and found the back-and-forth between people on different sides of a topic compelling. So, he decided   he would go to law school.

After graduating with a political science degree from the University of Oklahoma, Frost says he wanted to leave his home state. And there aren’t many places more different from Oklahoma than the Pacific Coast of Southern California.

“I love Oklahoma, or as I call it, ‘God’s Country.’ But we lived in Los Angeles for about five years when I was a kid, so it was nice to be back in the area, and you can’t get much nicer than Malibu,” Frost says with a smile.

After graduating from Pepperdine University’s School of Law, Frost worked for two years at Winstead PC and three years at Greenberg Traurig. While working at both firms, Frost got to know clients’ business, but only the parts of the business that applied to the matter at hand. 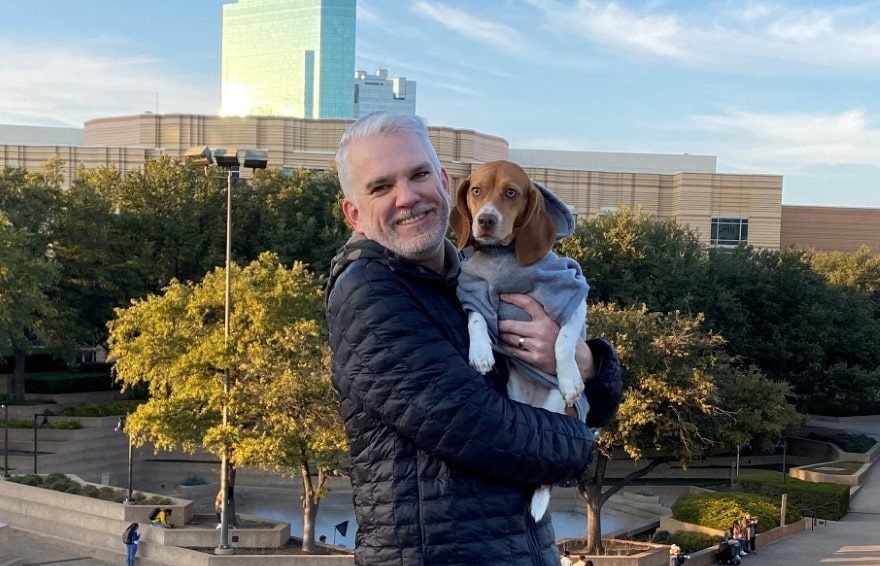 “And I didn’t want to account for billable hours and notate every six minutes of the day,” he says. “At first, I thought I’d work at a firm and retire from there. But I realized after a few years that what I really wanted to do was work in a corporate legal department.”

“Working in-house gives me a better understanding of how the business runs and I get to deal with the whole of the business more closely,” Frost says. “I’m happy I made that move when I did.” 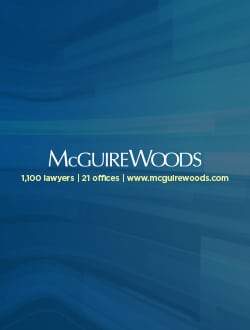 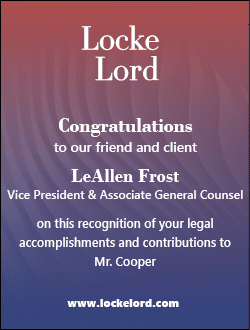 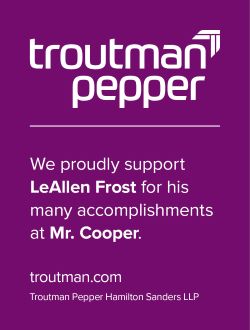